The Earth has lost 4,000 square kilometres of its tidal wetlands over the past 20 years, a new study finds. This is equal to an area roughly the size of the Spanish island Mallorca or the Indian state of Goa.

The research uses satellite data to monitor three types of tidal ecosystems – tidal flats, tidal marshes and mangroves – from 1999 to 2019.

It finds that a total of 13,700km2 of tidal wetlands were lost from 1999 to 2019, largely as a result of human activities, including aquaculture, agriculture and urban expansion. Indirect factors also played a role, the study says, including sea-level rise and coastal processes such as erosion.

However, during the same time period, both human-led and natural restoration led to the creation of 9,700km2 of new tidal wetlands – offsetting 71 per cent of the loss.

The study’s findings could “allow us to finally scale up local measurements of carbon accumulation to estimate the size of the coastal carbon sink”, a scientist not involved in the study tells Carbon Brief.

Wetlands are among the only ecosystems on the planet that are effectively going to sequester carbon in perpetuity. They also protect us from storms, can grow vertically to track rising seas and generate vast volumes of fish.

The new study, published in Science, takes a look at how the global area of tidal wetlands has changed over the past two decades and what reasons led to these changes.

Tidal flats are shallow, muddy areas that are covered and uncovered by the rise and fall of the tide. Tidal marshes are wet, vegetated areas found along coasts and rivers that are regularly flooded. Mangroves are densely covered, swampy forests surrounded by saltwater in a coastal area.

These ecosystems “are of immense importance to humanity”, the scientists say, providing benefits such as carbon storage, flood protection and habitat for commercial fish stocks.

Dr Mark Spalding – a marine scientist at the University of Cambridge and co-author of the study – explains to Carbon Brief:

“Wetlands are among the only ecosystems on the planet that are effectively going to sequester carbon in perpetuity – and, unlike freshwater wetlands, they don’t emit methane. They also protect us from storms, can grow vertically to track rising seas and generate vast volumes of fish.”

The study is the first to monitor all three tidal ecosystems simultaneously, adds Dr Nicholas Murray, study lead author and a research scientist focused on environmental management and conservation from James Cook University in Queensland. He tells Carbon Brief:

For the research, the scientists used observations from more than a million satellite images of tidal wetlands from around the world taken between 1999 to 2019.

To analyse and attribute changes to tidal wetlands over time, the researchers used machine learning – a form of artificial intelligence in which computer algorithms can be trained to uncover patterns and complex relationships in data.

The images below show examples of where the scientists identified tidal wetlands loss and formation through the years in different parts of the world using satellite images. In the images, red indicates tidal wetland loss, while blue colour indicates their gains. 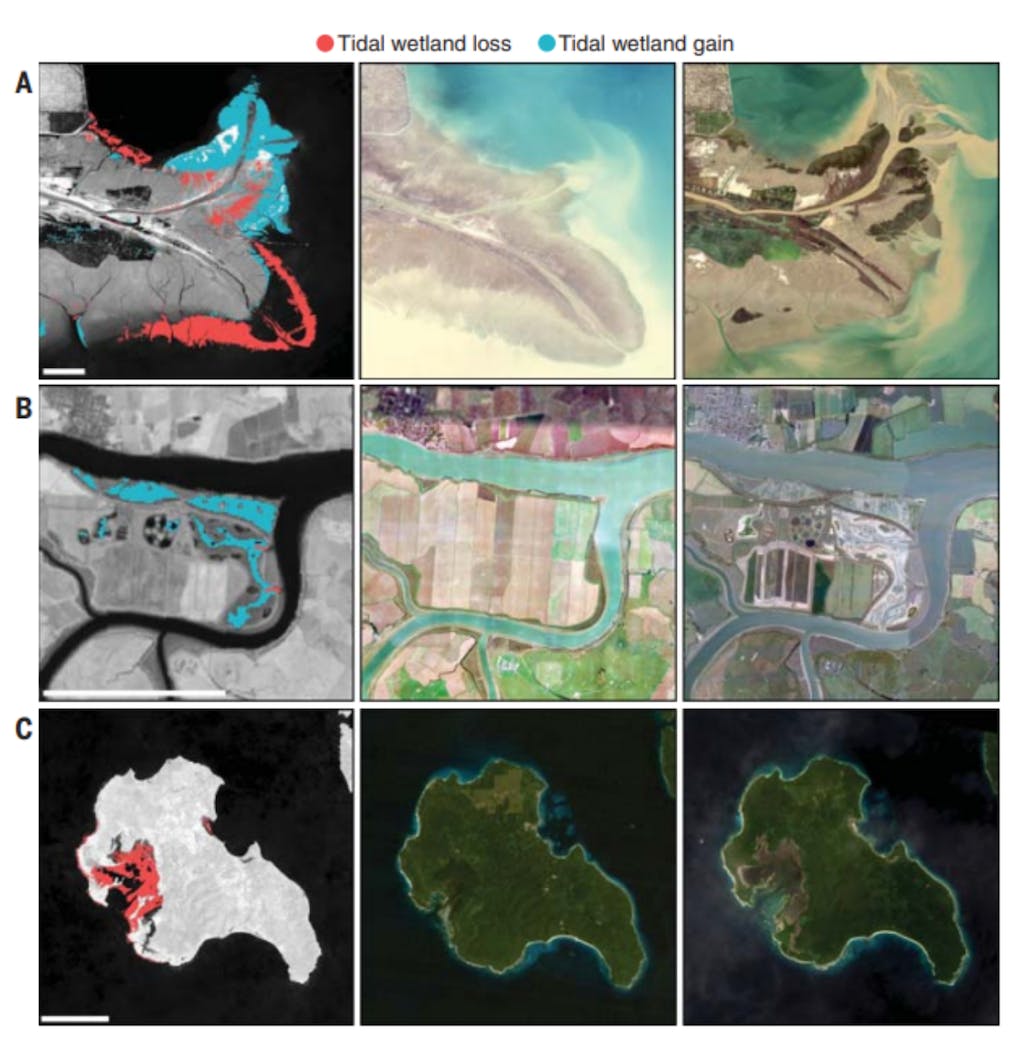 Using the satellite images, the study estimates that the total area of tidal wetlands in 2019 was at least 354,600km2 – larger than previous estimates had suggested.

It adds that the largest remaining single tidal wetlands are located in the Amazon delta, the northern Bay of Bengal, New Guinea, and the Niger delta.

The researchers also used the images to produce the first estimate for the size of tidal marshes globally, which they say covers 90,800km2.

This estimate could aid efforts to quantify global “blue carbon” stocks – the carbon stored in coastal or marine ecosystems – the scientists say in their research paper.

“It’s wonderful to finally know how many marshes there are in the world,” Dr Matthew Kirwan – professor at Virginia institute of marine science who was not involved in the study – tells Carbon Brief. He adds:

“This work could allow us to finally scale up local measurements of carbon accumulation to estimate the size of the coastal carbon sink.”

The research also finds that, from all three studied ecosystems, tidal flats experienced both the greatest loss (7,000km2) and gain (6,700km2), accounting for almost two-thirds of the total area of tidal-wetland change.

The world’s mangroves, by contrast, experienced twice as much loss as they did gains over the study period, according to the research.

Tidal marshes have the lowest total-area change and are the only ecosystem where gain marginally exceeds their loss, the study adds.

The study also finds that changes in tidal wetlands area are largely dependent on region.

For example, the researchers find that about three-quarters of the 4,000km2 that were lost globally from 1999 to 2019 occurred in Asia.

In addition, 69 per cent of the loss was concentrated in just three countries: Indonesia, China and Myanmar – 36 per cent, 21 per cent and 12 per cent, respectively.

The maps below show the global distribution of tidal wetlands in 2019 (top), global losses from 1999 to 2019 (middle) and global gains (bottom). On the top map, darker colours indicate larger areas of tidal wetlands. On the other two maps, circle size indicates the extent of tidal wetland loss and gain. 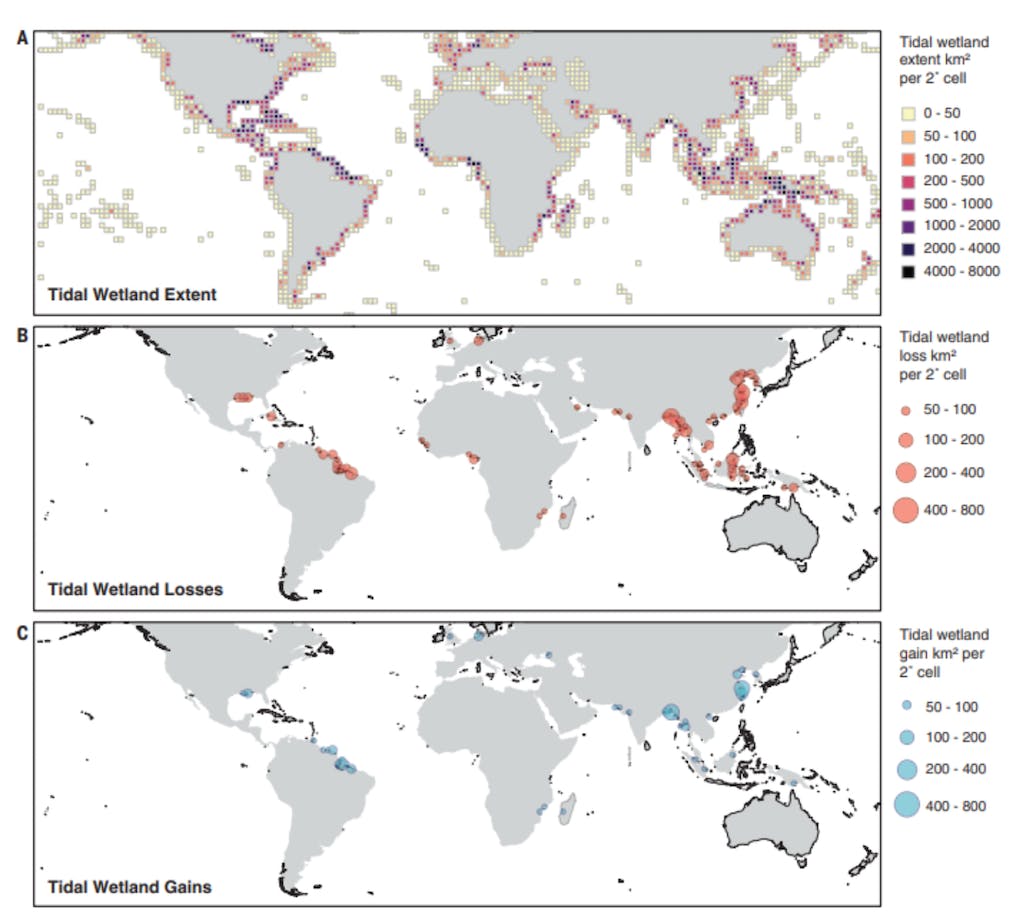 The researchers found that changes to tidal wetlands areas are being caused by a variety of direct or indirect drivers.

Direct factors include human activities, such as aquaculture, agriculture, plantations, coastal development, and the construction of physical structures, such as seawalls and dikes. These factors accounted for 39 per cent of total tidal wetland losses over the past two decades, the research finds.

Indirect factors, meanwhile, include human-caused sea-level rise, which can cause wetland ecosystems to “drown”. Other indirect factors include storms and coastal processes, such as erosion. These factors accounted for 86 per cent of tidal wetland gains, according to the research.

The study finds that, globally, indirect drivers accounted for most losses of tidal marshes (78 per cent) and tidal flats (66 per cent), whereas mangrove losses were equally a result of direct and indirect drivers (50 per cent).

The researchers also find that, over the course of the study period, around 2 per cent of the world’s tidal wetlands transitioned from one type of ecosystem to another. In 27 per cent of cases, mangroves transitioned to tidal marshes – or vice versa.

Overall, the findings could help scientists advance their understanding of how tidal wetlands are changing in response to global warming and other factors, Murray says: