Rising global temperatures once again caused unprecedented heat, floods, and tropical storms that often had deadly consequences. Few regions were spared, with some of the most populous countries experiencing different kinds of extreme weather one after the other.

Eco-Business looks back at 10 noteworthy extreme weather events in 2022, two more than on last year’s list.

1. Floods in Pakistan and South Asia 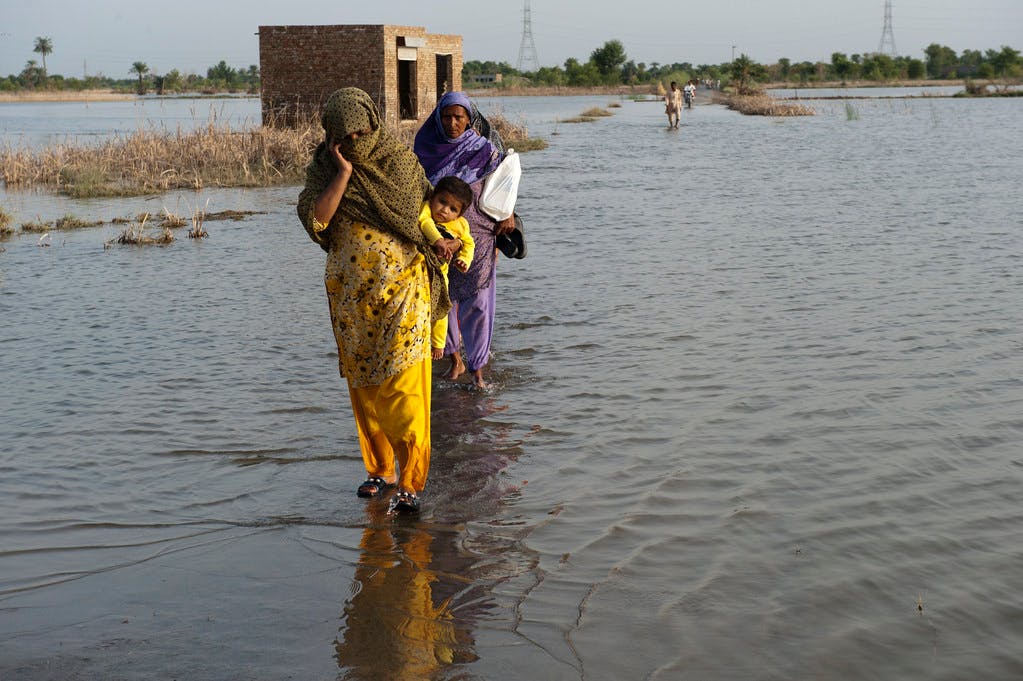 The Global Shield Against Climate Risks is a joint initiative launched at COP27 by the G7 and the V20 (group of countries most threatened by climate change) for climate insurance and disaster funding. Image: UNDP Climate, CC BY-SA 3.0, via Flickr.

Many parts of the world experienced severe flooding this year but none so catastrophic as Pakistan, which saw more than 1,500 people killed and 33 million displaced following a record-breaking monsoon in June. Countries including India, Bangladesh, and Afghanistan also recorded hundreds of deaths and millions displaced due to flooding around the same period.

The heavy rainfall between 11 and 19 June not only spread infectious diseases in Pakistan but also wiped out 45 per cent of the country’s cotton crop, costing an estimated US$10 billion in damages as of September and leaving many farm workers jobless.

Climate change made the floods up to 50 per cent worse and caused three times the rainfall recorded as Pakistan’s 30-year average, experts said. Haphazard infrastructure development and deforestation due to urbanisation also contributed to the disaster, as did melting glaciers in the Himalayas.

2. Heatwave in South and Central Asia

An elderly woman having lunch in the sun at Adibasi Sahi IN India’S ODISHA STATE. Extreme heat is impacting hundreds of millions of people in the country. Image: Soumi Das / UNICEF

Massive floods were not the only extreme weather disaster Pakistan and its neighbours had to endure. Just two months before the disastrous monsoons, South and Central Asia had been hit by an early heatwave that saw the region receive 62 per cent less rain than usual in March.

Temperatures reached record highs in parts of India and exceeded 40 degrees Celsius for more than two weeks in May, causing unbearable hot conditions in Indian factories and raging forest fires in northern India. Pastoralists in Kashmir were left with no grass to feed their cattle and in northern Pakistan, fires destroyed medicinal crops that locals depend on for their livelihoods. The heatwave also exposed the dangerous lack of cooling equipment faced by more than 320 million people in India.

3. Heatwave and drought in China 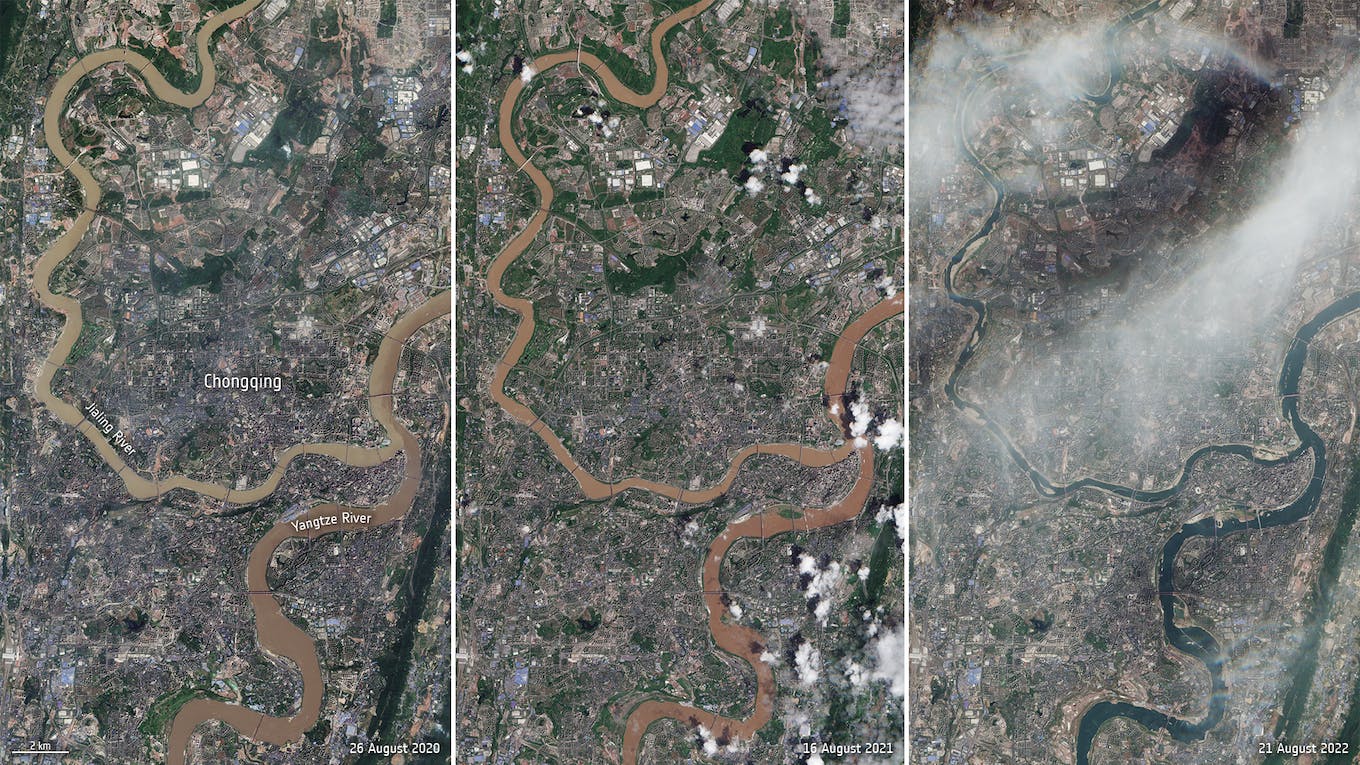 Drought threatened many of Taiwan’s resevoirs in August 2022, including the Xinshan Reservoir in Keelung. Image: Taiwankengo/ Wikimedia Commons

Many other parts of the world were also affected by deadly heat. From June to August 2022, China experienced its worst heatwave in 60 years with temperatures exceeding 40 degrees Celsius in several provinces. China’s Meteorological Administration issued continuous extreme heat warnings for more than 25 days in the northwest Xinjiang region, northern Shaanxi and eastern Jiangsu provinces.

Chen Lijuan, an expert at the National Climate Center who predicted that such heatwaves would become a “new normal”, told the media that climate change was an influential factor in causing the heatwave and drought. 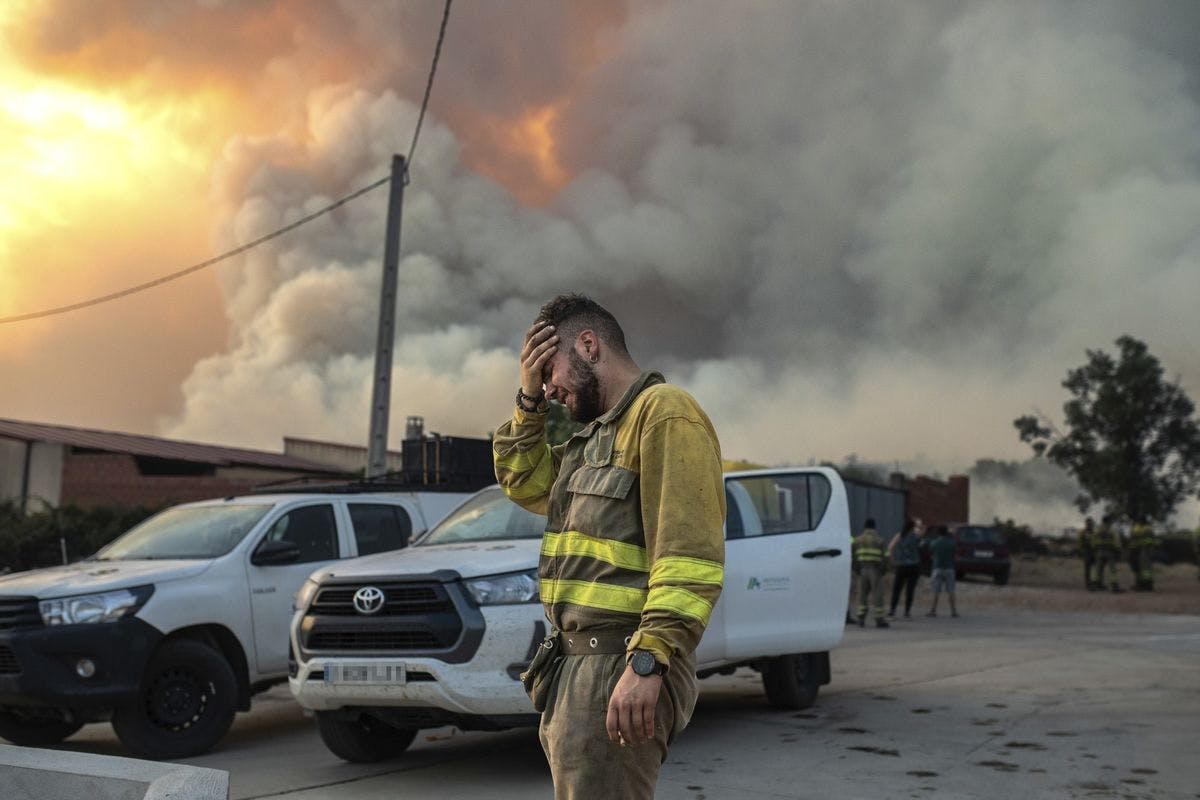 A firefighter cries while fighting a blaze in the Losacio area of Spain on July 17, 2022. Image: Emilio Fraile/Europa Press via AP

Record high temperatures did not spare the West, as the United States and countries across Europe experienced their own heatwaves. Hamburg in Germany recorded more than 40 degrees Celsius for the first time ever in July, while the United Kingdom’s highest temperatures in the summer exceeded previous records by 1.6 degrees. Elsewhere on the continent, temperatures soared to between 40 and 43 degrees.

The resulting drought caused wildfires to raze forests in countries including France, Greece, Portugal, Slovenia, and Spain, burning over 785,000 hectares or more than double the 317,000-hectare average over the past 15 years, according to the European Forest Fire Information System. At least a dozen died, thousands were displaced and carbon emissions surged to break records kept since 2003. 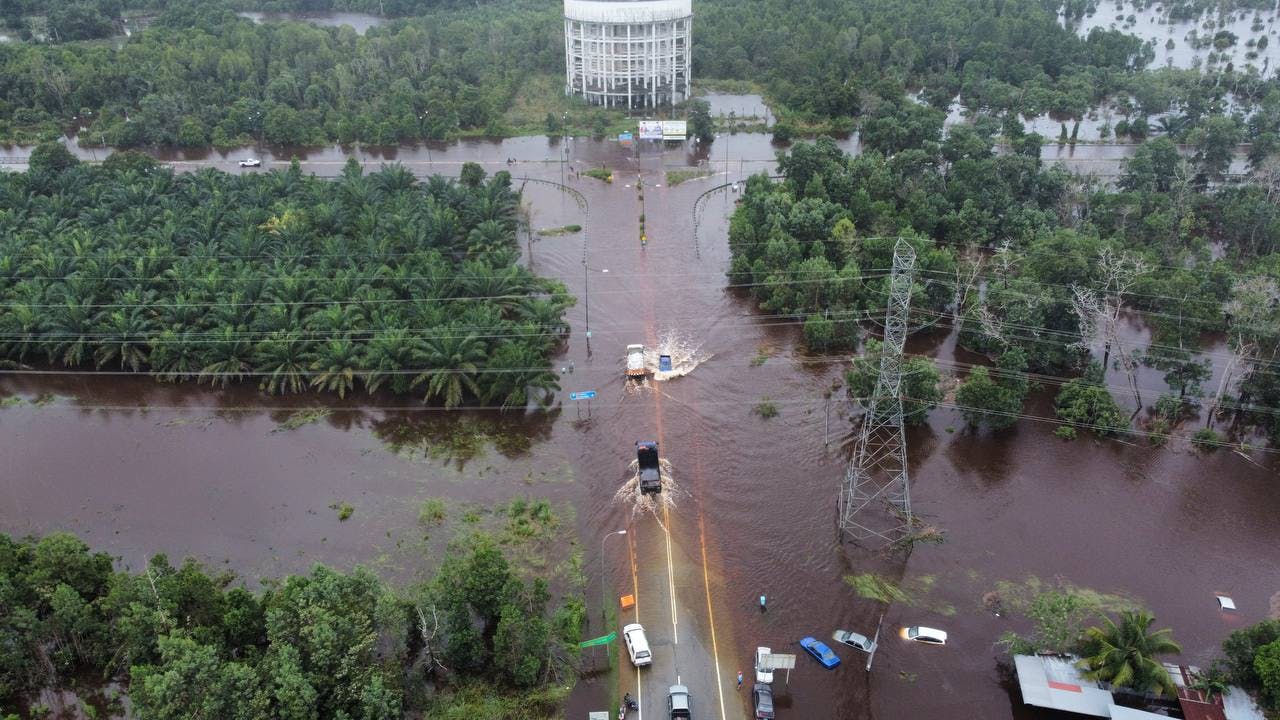 A flooded area in Kuantan, Pahang, a state in Malaysia, during the December 2021 floods. Image: Twitter users @xchipsmore and @thelivingtr/Wikimedia Commons

Malaysia’s monsoon rains, which started in December 2021 and continued into 2022, caused the worst flooding in the country’s history. In February, around 6,000 people were displaced in Kelantan and Terengganu, states on Peninsular Malaysia’s east coast. At the time of writing nearly 10 months later, more than 56,000 have been evacuated following heavy rains and rising floods in the same states.

While climate change was said to have played a role in causing the more severe rains, experts said other factors such as clogged city drains and over-development in former green areas were also behind the disaster.

6. Tropical storms and typhoons in the Philippines 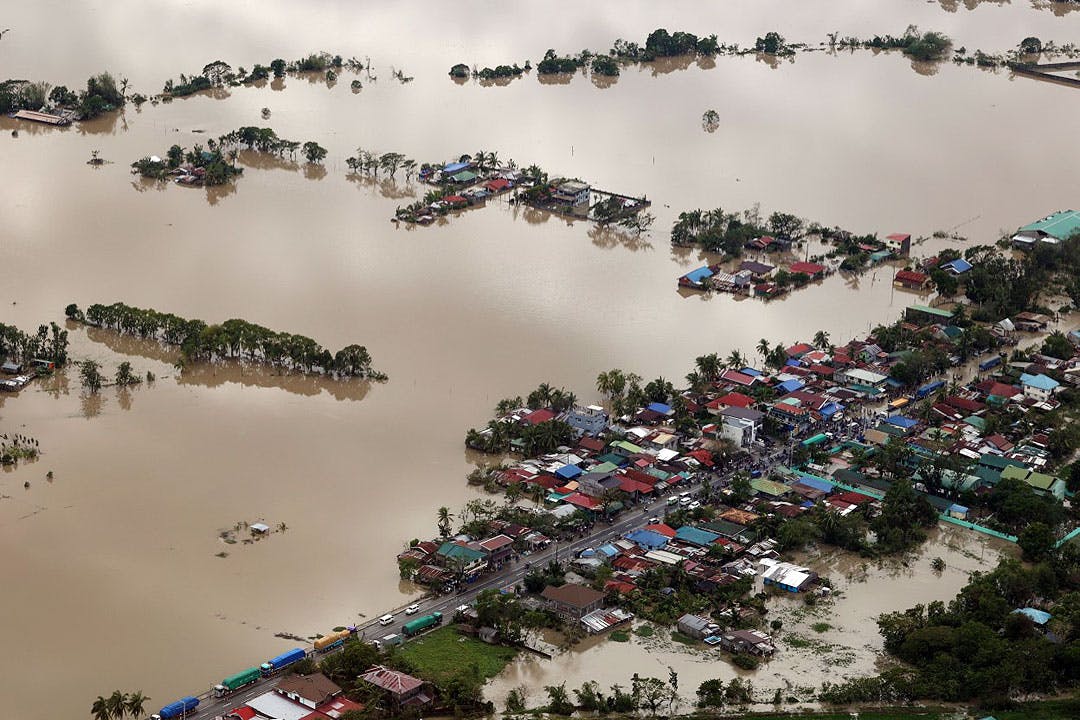 Swaths of farmland in Central Luzon, Philippines were devastated by Typhoon Noru, which slammed into the country in September. Image: Kriz John Rosales/ PPA

The Philippines is no stranger to a growing number and intensity of typhoons across its many islands, spurred by warmer oceans and higher global temperatures. After Typhoon Rai killed more than 400 people in December 2021, scientists and activists warned that six super typhoons a year would be the “new normal” for the Philippines.

In 2022, the region witnessed several strong typhoons including Typhoon Noru, which also made landfall in Vietnam, and Typhoon Nesat, which caused thousands to flee across the Philippines. Further north, Japan and South Korea were hit by violent typhoons Hinnamnor and Namadol in August and September, respectively.

But the country’s most destructive weather events this year were tropical storms that caused landslides and floods. In late October, Tropical Storm Nalgae caused deadly landslides and more than 550 flooding incidents across the country.

7. Hurricane Ian in the United States 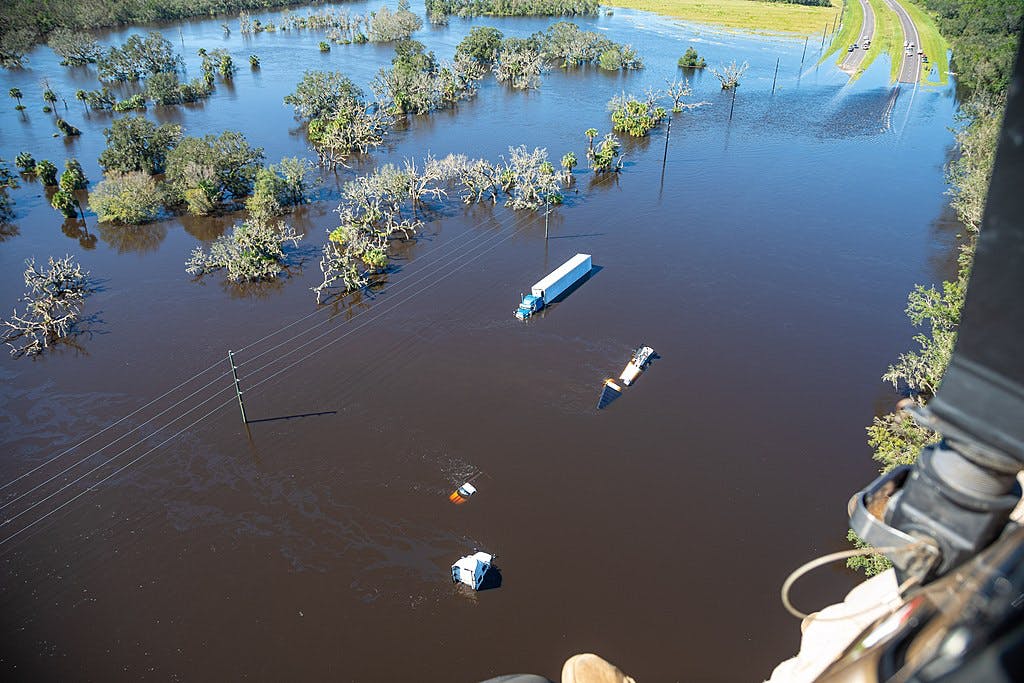 Hurricane Ian struck the state of Florida at the end of September, causing the region’s most deaths by hurricane in almost 90 years. More than 100 lives were lost including five in Cuba. Power and risk modeling service RMS estimated that losses totalled US$100 billion. Around 600,000 homes and businesses went without water and power for days after the hurricane.

Ahead of the hurricane, Tom Knutson, a leading scientist on hurricanes and climate change, had warned that “even if hurricanes themselves don’t change [due to climate change], the flooding from storm surge events will be made worse by sea level rise.”

8. Sandstorms in the Middle East 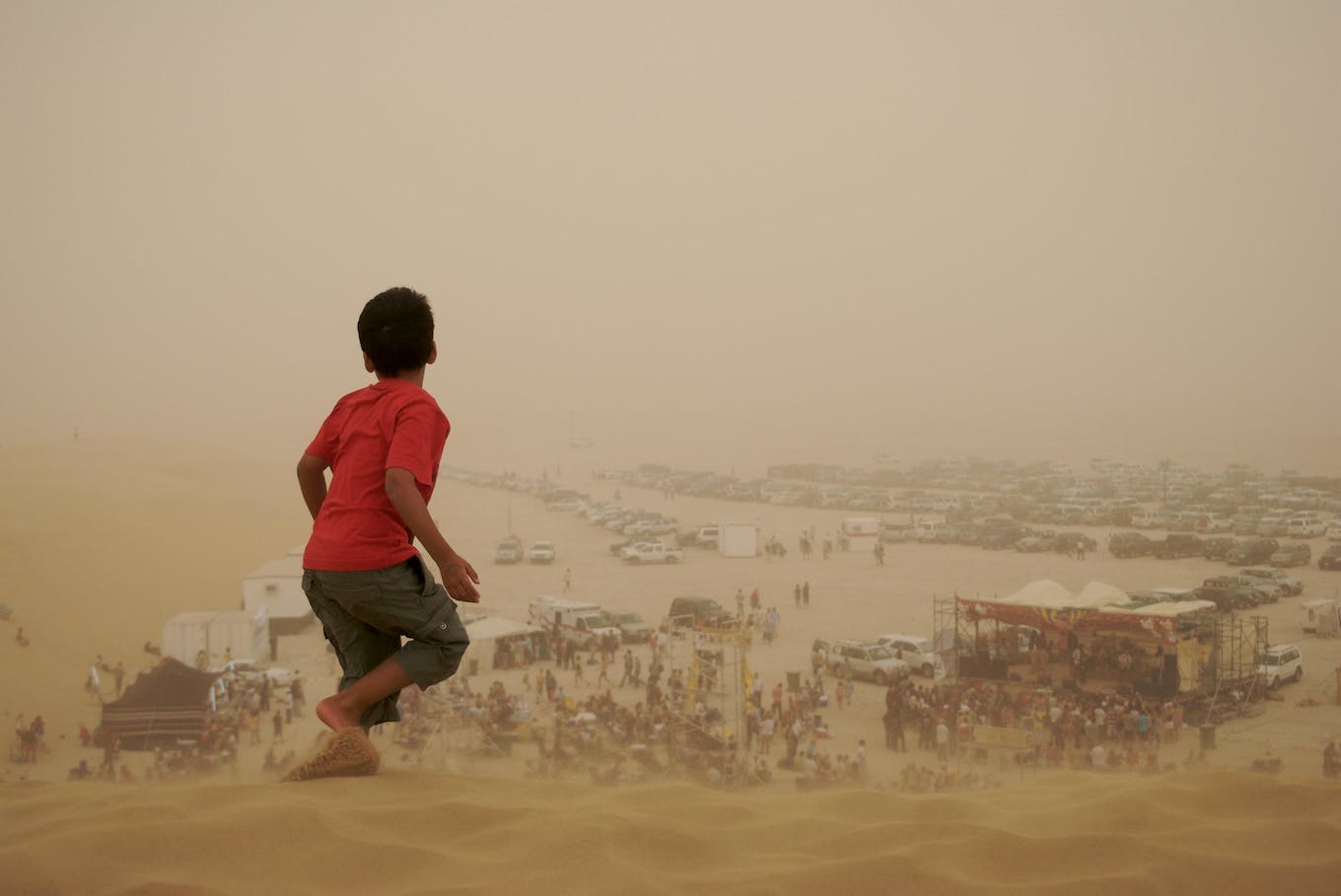 A sandstorm covered Doha, Qatar in May 2022 and reduced visibility to less than 2km in some areas. Image: guy p, CC BY-SA 3.0, via Flickr.

Countries in the Middle East including Iran, Iraq and Syria were hit with sand and dust storms in May this year that caused more than 1,000 people to be hospitalised for respiratory problems and disrupted flights in and out of several cities. The World Bank had previously cautioned that such storms could damage key infrastructure and transportation, among other costs.

Although sandstorms are not unusual in the region, they have been happening earlier and more frequently, having started as early as March this year and spreading over a wider area. Officials and environmentalists warn that they are likely to become more severe due to rising global temperatures.

9. Drought in the Horn of Africa 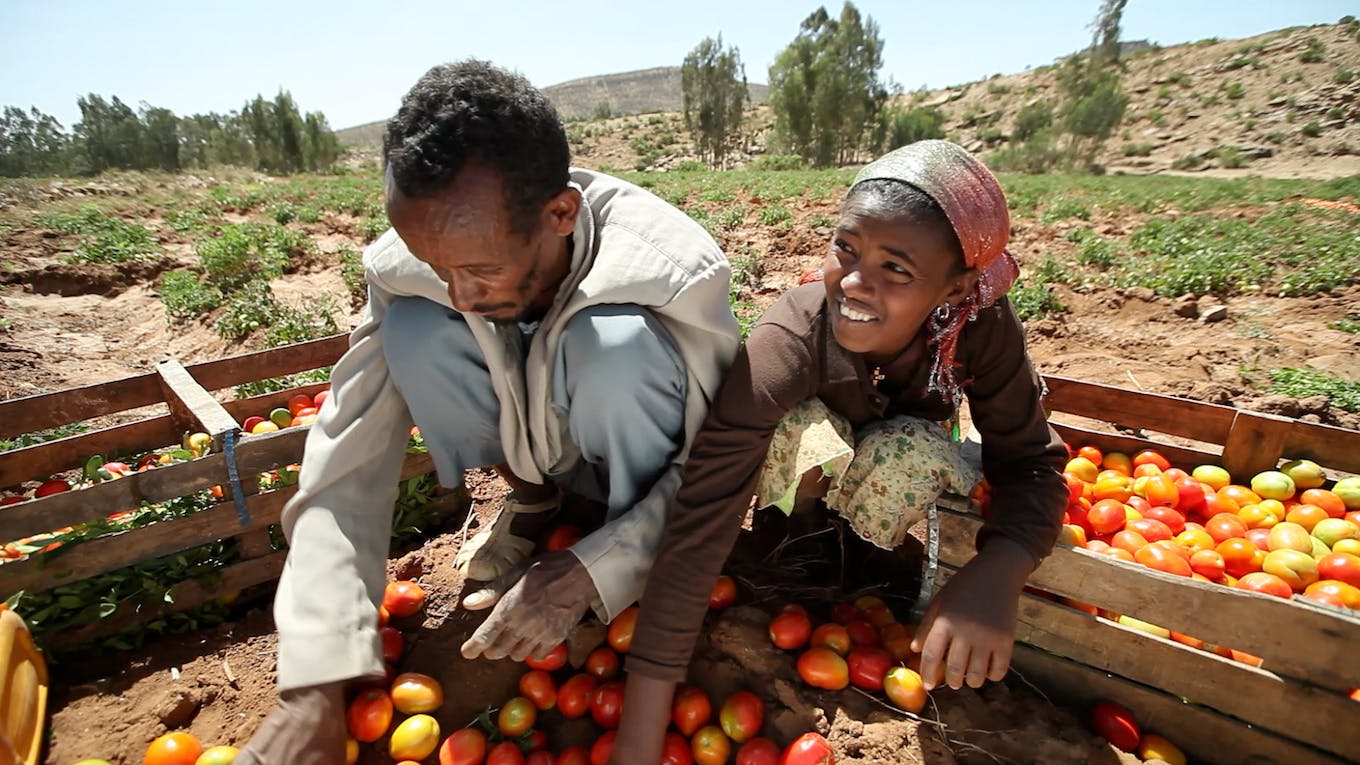 In the Horn of Africa, which comprises the countries of Djibouti, Eritrea, Ethiopia, and Somalia, as well as neighbouring Uganda, drought has caused one of the most extreme food crises the continent has ever seen.

Drought and famine killed 2,500 people in Uganda and affected eight million in Ethiopia this year, according to Carbon Brief’s analysis of data from the Emergency Events Database, an international disaster database. 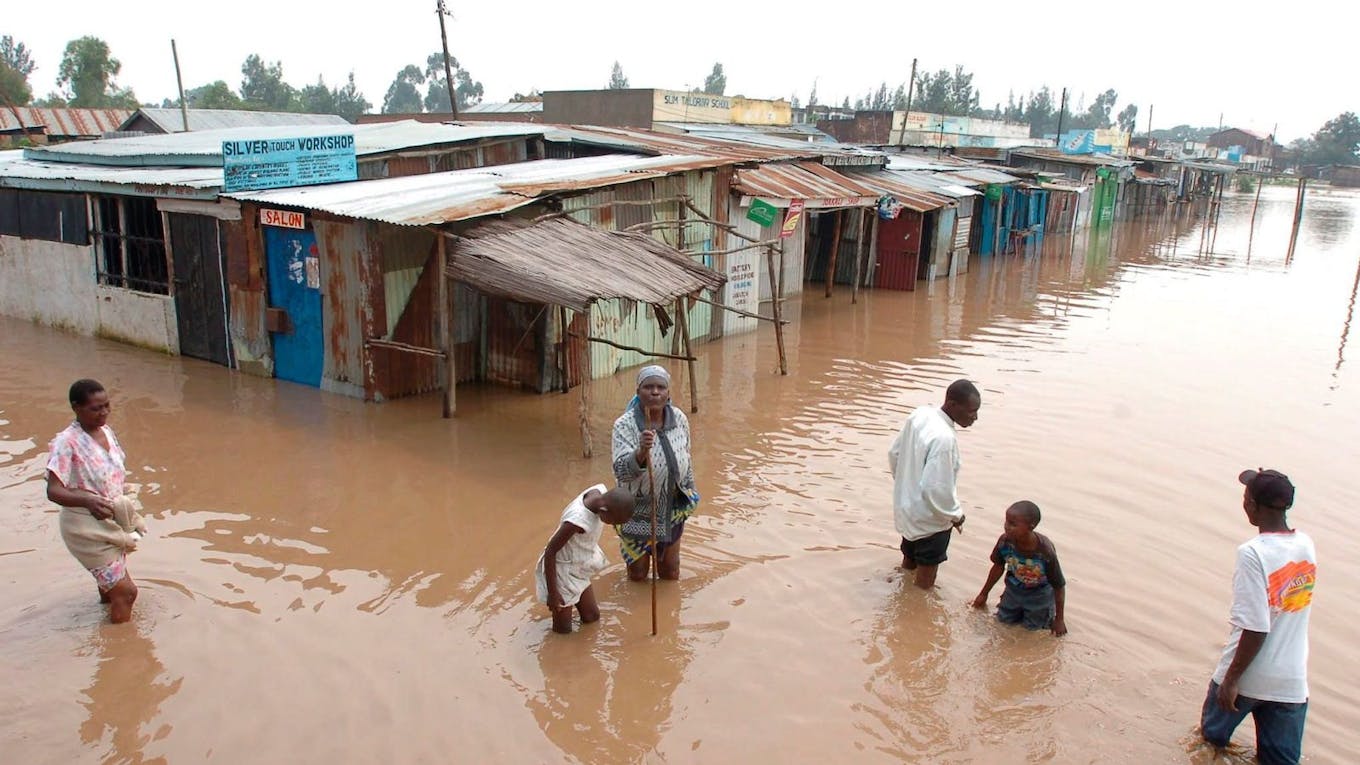 Villagers go about their business in a flooded market centre in Kisumu, about 400km west of the capital Nairobi in Kenya. Image: Jacob Wire/ EPA

In contrast to the lack of rain in several countries, other parts of Africa experienced disastrous floods this year. More than 600 lives were lost and at least 100,000 left homeless in Nigeria due to floods in October. In neighbouring Chad, hundreds of thousands faced flooding in August and again in October as the country experienced its heaviest rainfall in 30 years.

At this year’s COP27 in Egypt, Mahmoud Mohieldin, the UN Climate Change High-Level Champion for Egypt said, “People who have done the least to cause the climate crisis are paying the highest price. Africa accounts for no more than 3 per cent of global emissions, yet many of its people are suffering the most from climate change.”

In a year when misinformation ran amok, “bad” news was vilified, and climate wins were few and far between, here are the stories that Eco-Business readers found most interesting.
Eco-Business' 10 most read stories of 2022