Developing countries now dare to hope that they have enough money to tide through rising climate risks, though many details need to be ironed out in the coming year. Efforts to slash emissions, meanwhile, appear to have taken a back seat.

After two weeks of tough and sometimes bitter negotiations that ran overtime by nearly two days, some 200 countries agreed to set up a fund to help climate vulnerable nations cope with increasingly severe climate disasters.

Attendees at the closing plenary of the COP27 climate summit in Egypt burst into applause as the loss and damage fund was agreed upon at around 4 a.m. on Sunday (20 November). It was cleared as the top item on the agenda, about two hours before all other tasks were ticked off.

“My friends, we heard the calls, and we responded,” said COP27 president and Egypt’s foreign affairs minister Sameh Shoukry in his closing speech.

The deal represents the one ticket item that received the broadest support among countries both rich and poor, amid others that either had decisions kicked down the road, or had some countries grudgingly agree to as a compromise.

The loss and damage agreement calls for a fund to help “developing countries that are particularly vulnerable” to climate risks, a group that is currently not well-defined. A 24-member committee, to be formed, will have to come up with the groupings by the COP28 climate summit next year, where countries are expected to agree to the details of the fund.

Money is to come from a “wide variety of sources”, which the deal suggests could include non-government organisations and businesses. The fund should also work in parallel with existing initiatives that address climate loss and damage, the agreement states.

Calls for loss and damage funding had been echoing for decades, but particularly bad extreme weather events this year, along with a COP summit venue in Africa – one of the badly affected regions, meant that the demands were especially forceful. COP27 was the first time that funding for loss and damage was included as an agenda item, instead of just technical talks.

“The establishment of a fund is not about dispensing charity. It is clearly a down payment on the longer investment in our joint futures,” said Sherry Rehman, Pakistan’s climate change minister. Pakistan’s record mid-year flood was cited repeatedly during COP27 in calls for climate reparations.

The agreement on the fund was by no means predetermined, with talks sending mixed signals till the last hours.

The first proposal at COP27 came from the G77 and China group of mostly developing countries on Tuesday (15 November), which called for a fund paid for by developed countries by end-2023. Ralph Regenvanu, Vanuatu’s climate change minister, said the bloc had discussed walking out if it did not get its way.

The European Union counter-proposed on Thursday a fund to help only the “most vulnerable countries”, paid for by a “broad donor base” – understood to include China and rich countries still classified as “developing”. The bloc also wanted countries to pledge to slash emissions faster as part of its plan.

Critics said the EU was trying to break the unity of developing countries by offering money only to some. Tuvalu, a Pacific nation, voiced support for the EU proposal on Friday morning, jumping ahead of the Alliance of Small Island States, a bloc Tuvalu is part of.

By Saturday morning, the EU also said it was ready to walk away from bad deals, raising fears that the entire climate congregation could end bitter and empty-handed on loss and damage.

“We are worried that we could run out of time,” said Steven Guilbeault, Canada’s climate minister, on the same morning.

“Negotiations are on the verge of a breakdown, even more so than other years,” David Tong, a campaigner from advocacy group Oil Change International, who has been to eight COP summits, also said. 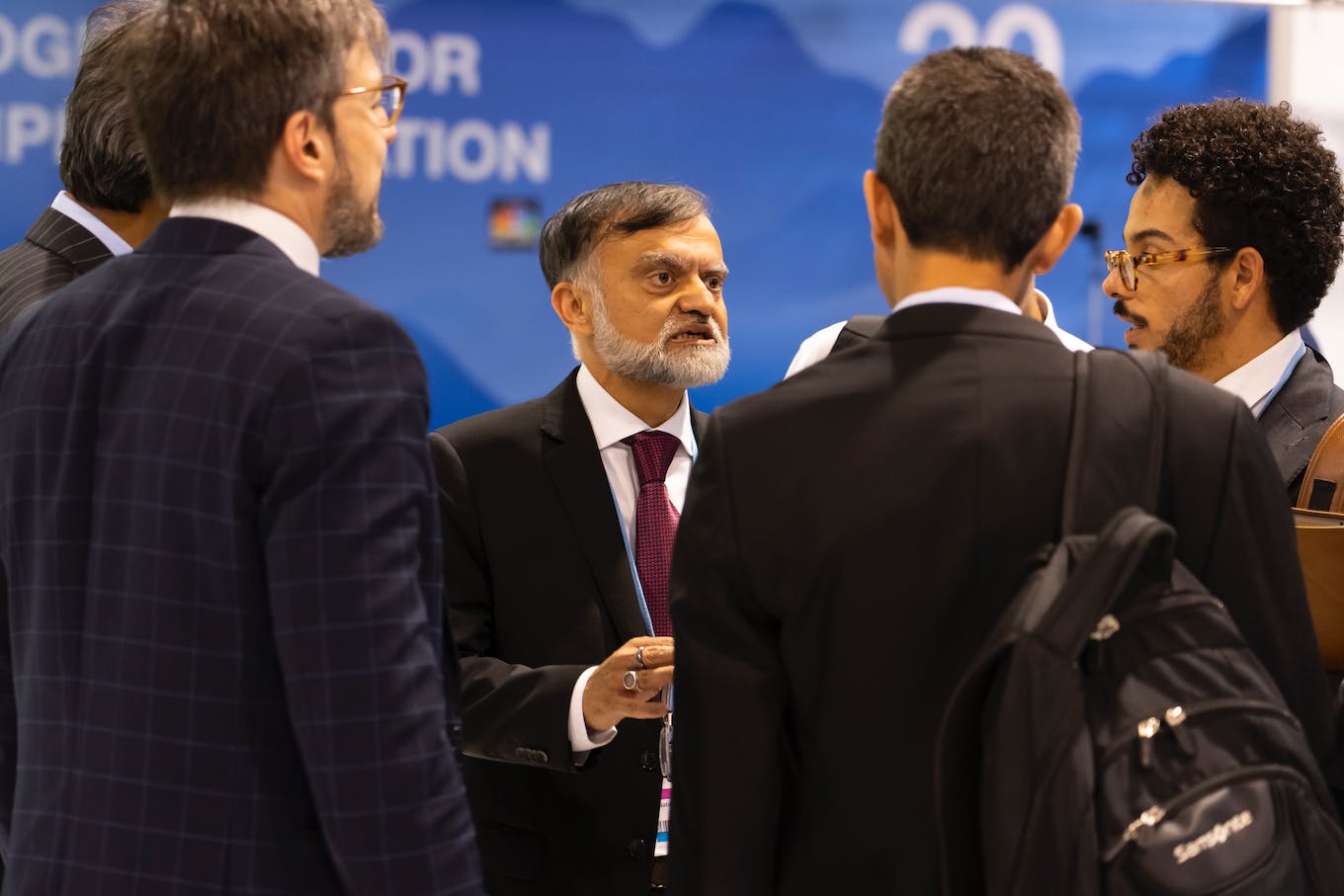 Nabeel Munir, lead negotiator of the G77 and China bloc, speaking with delegates at COP27 on the night of Saturday, 19 November, 2022. Image: Eco-Business / Liang Lei.

Observers say the vague wording of who needs to pay in the final draft could have helped to push it past the finishing line – even if it means more loose ends in the years ahead. The G77 and China bloc is understood to have initially stood firm in its ask for only countries deemed developed in a 1992 classification to pay for the fund. Member countries like Qatar, Singapore and the United Arab Emirates are considered developing states.

“The [G77 and China bloc] is a coalition of very different types of countries, from the least-developed to the most-developed,” said Nisha Krishnan, director for climate resilience in Africa at US non-profit World Resources Institute.

“To keep that coalition going, they do need to understand and balance the needs of all of the members,” Krishnan said, explaining why the bloc did not push to broaden the donor base.

Grace Fu, the sustainability and environment minister of Singapore, said the city-state will discuss with other parties and figure out how it can “play a part” in the formal arrangements.

“There is a certain historical context to how climate finance has come about; it has to be based on the agreed basis in the Paris Agreement of common but differentiated responsibility. That is a position that all parties have agreed to, and must continue to be the basis of discussions going forward,” Fu said. She added that Singapore will participate in talks with the “right spirit of cooperation and collaboration”.

“Common but differentiated responsibility” is a global principle agreed in 1992 that the whole world is obliged to act on climate change, but industrialised nations bear greater burden.

There is also the fear that the new fund is yet another toothless fund.

“Right now it is an empty fund, and we have a huge challenge ahead to ensure that developed countries contribute to it, in line with justice and equity. We must not see a repeat of the abysmal performance of rich countries failing to provide the already inadequate US$100 billion a year promised over a decade ago,” said Sara Shaw, a campaigner from advocacy group Friends of the Earth International.

Developed countries only fulfilled about 80 per cent of the US$100 billion a year pledged at the 2020 deadline. 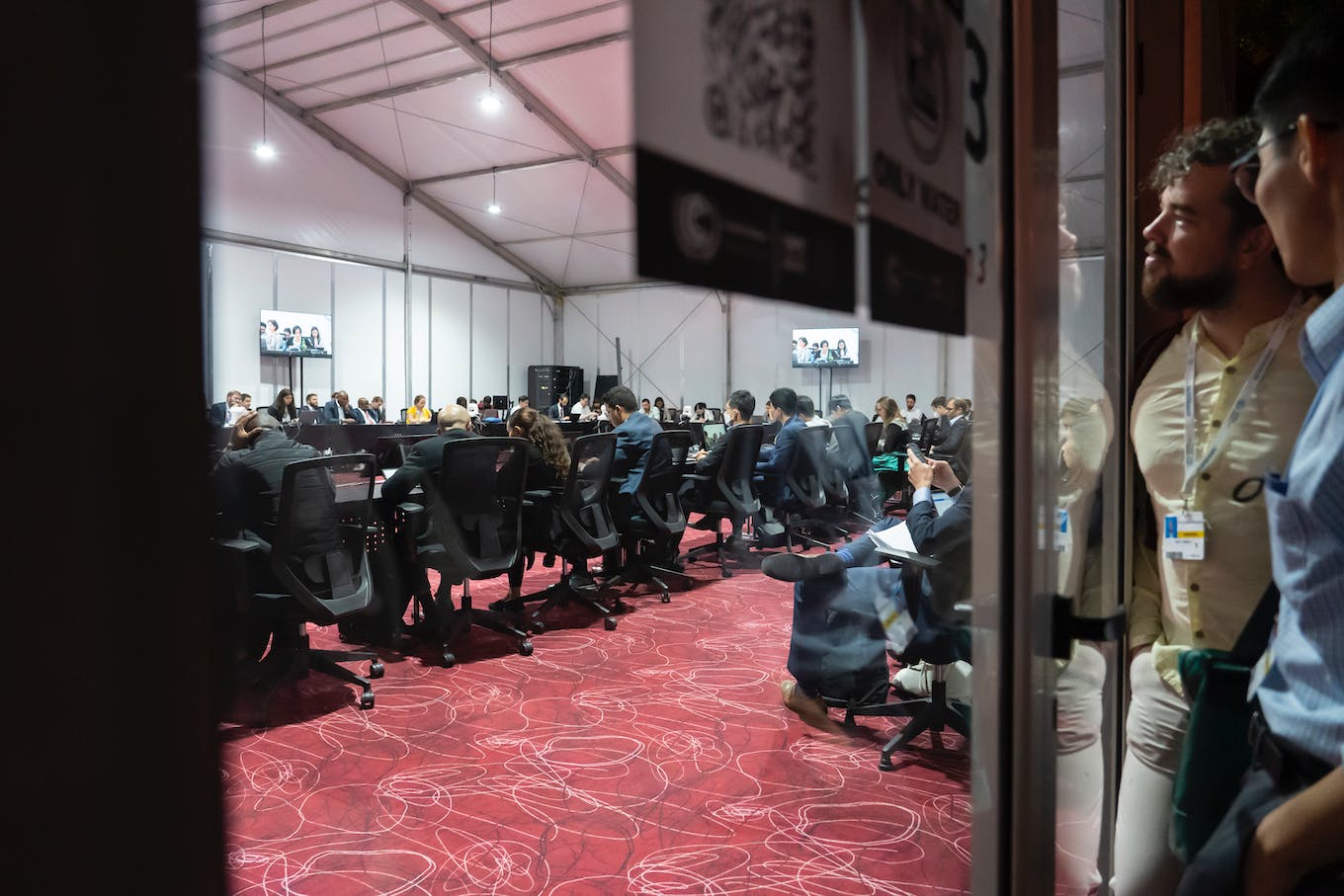 Observers peek into an off-limits meeting running late into the night at COP27 on Saturday, 19 November, 2022. Image: Eco-Business/ Liang Lei.

While loss and damage captured the mindspace of COP27 attendees for much of the two weeks, the final hours of the COP27 talks were instead dominated by disagreements on how ambitious the final summit decisions should be in slashing fossil fuel use and global emissions.

Word got around that some oil and gas producing countries, Saudi Arabia and Russia among them, wanted to weaken texts on energy transition. A mention of increasing ‘low-emission’ energy appeared next to a call to scale up renewables in the final draft of COP27’s main decision text, which was accepted by all parties.

Wael Aboulmagd, Egypt’s top climate diplomat, said “low-emission” energy does not exclude natural gas, and that an immediate switch to renewables for some countries is “impractical”.

Natural gas has the lowest carbon content of all fossil fuels when burnt and many countries regard gas as a “transition fuel” towards renewables. However, scientists have said that gas still produces too much carbon pollution to be relevant in credible decarbonisation scenarios.

At the COP27 closing plenary, a Saudi Arabia representative, speaking on behalf of the Arab Group of about 20 countries in the region, repeated the stance that countries should focus on reducing emissions instead of cutting specific energy sources.

There is also no mention of the phase down of all fossil fuels, seen by many as an upgrade to a call made at COP26 last year to phase down coal. The new clause was raised by India a week ago and received the support of some 80 countries, including the United States and nations in the EU.

However, none of the five drafts since Thursday that eventually led to the final cover text includes the anti-fossil fuel clause, and the final text repeated a call from COP26 to phase down unabated coal power and retire inefficient fossil fuel subsidies. Also copied from COP26 were mentions of keeping global warming well below 2°C and pursuing efforts towards 1.5°C.

The plan for a “mitigation work programme” meant to drastically scale up decarbonisation ambition before 2030 was stymied by a clause of not imposing new targets or goals. Under agreed rules, the work programme also cannot have a timeline that moves faster than that of national voluntary pledges under the Paris Agreement – which countries are obliged to update only every five years.

“Too many parties are not ready to make more progress today in the fight against the climate crisis. There are too many attempts to even roll back what we agreed in [COP26 in] Glasgow,” said Frans Timmermans, executive vice-president of the European Commission.

Timmermans said the EU “reluctantly” agreed to all the COP27 decisions to not kill the loss and damage fund that developing countries urgently need.

“We had to give up some of the things we wanted, to help other parties and this process move forward. We can live with that…but I urge [parties] to acknowledge that when you walk out of this room, that we have all fallen short,” he said.

Friends of the Earth International said that apart from loss and damage, the outcomes from COP27 are “perilously weak”. Manuel Pulgar-Vidal, global climate and energy lead for environmental group WWF, said that the loss and damage deal risks becoming a “fund for the end of the world” without greater ambitions to slash emissions.

“We cannot afford to have another climate summit like this one,” Pulgar-Vidal said.

Nonetheless, there are additional bright spots beyond loss and damage from COP27. Multilateral development banks have been asked to reform their practices and priorities, amid criticism that they are too risk-averse to invest in some developing countries’ climate projects. The call for renewable energy was more prominent this time round. More details have been added to a programme for building up the world’s climate adaptation capabilities.

“We need to use this package as a springboard to restore trust in our process,” Simon Stiell, chief of the climate change arm of the United Nations, said of the COP27 decisions.

“There is absolutely no point putting ourselves through all that we have just gone through, if we are going to participate in an exercise of collective amnesia the moment the cameras move on,” Stiell said.