Japanese firms made up five out of 17 companies from the Asia Pacific that made it to Corporate Knights' Global 100 Index of the world's most sustainable corporations. Tokyo-based drugmaker Eisai, in 16th place, was the top Asian firm.

Against the backdrop of Covid-19 disruptions, Japanese pharmaceutical and tech companies flew Asia’s flag in the latest ranking of the world’s 100 most sustainable firms.

The pandemic has accelerated existing growth trends in the solutions sectors of clean energy, technology and health sectors, so it is encouraging to see Asian firms from the health and tech-related sectors rising into the Global 100.

The Global 100, which is usually published on the sidelines of the World Economic Forum held yearly in Davos, Switzerland, was launched instead in a virtual roundtable discussion on 25 January.

It assessed 8,080 publicly listed companies with more than US$1 billion in revenues against 24 sustainability indicators, based on new criteria that not only reflected the importance of tackling the climate crisis but also some of the social concerns that the Covid-19 pandemic and Black Lives Matter social movement highlighted during 2020.

Indicators included investment in environmentally and socially beneficial products, paid sick leave, as well as executive and board racial diversity. 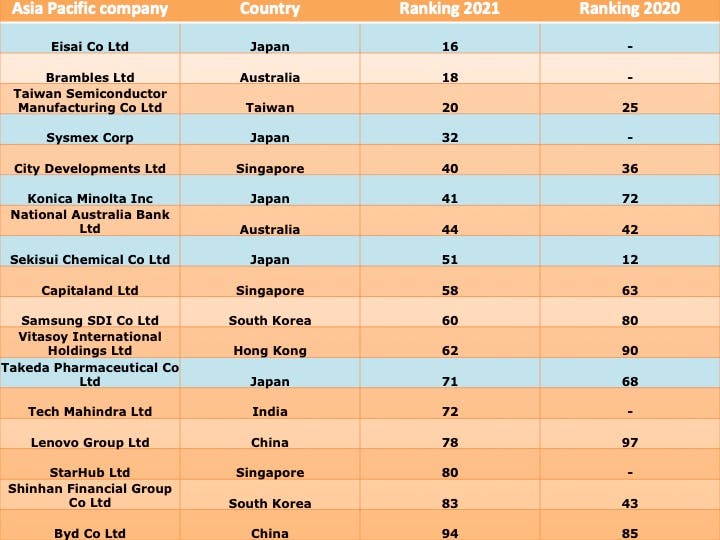 Eisai made a comeback on this year’s index after dropping out since 2019, and was the top-ranked pharmaceutical company this year. The company, which focuses on neurology and anti-cancer drugs, scored for its investment in medicines which are under equitable pricing strategies that make them more accessible in developing countries. However, it scored poorly for racial and gender diversity. Among its senior executives, only 16 per cent are female while only nine per cent of its board of directors are non-Japanese.

The 80-year old firm also performed well in employee safety, recording no job-related fatalities. It offered at least 10 days of paid sick leave to all workers—a benefit which 86 per cent of Corporate Knights’ Global 100 firms offered to their employees, compared to only 41 per cent of companies on the MSCI ACWI, a global stock index that tracks about 3,000 stocks across developed and emerging economies.

Konica Minolta generated over 73 per cent of its revenue from solutions consistent with the Sustainable Development Goals (SDGs), but only spent the equivalent of 0.2 per cent on projects with environmental or social impact. The company, which aims to reduce its carbon emissions by 80 per cent by 2050, has an all-Japanese board with only 3.6 per cent women.

Kobe-headquartered healthcare company Sysmex Corp ranked 32nd despite having no women in its board. It was recognised for making 100 per cent socially beneficial investments like clinical evaluations for new Covid-19 testing and robotic-assisted surgery systems.

Pharmaceutical giant Takeda earned 10.5 per cent of its revenue from, and invested a similar percentage in sustainable solutions. However, it did not provide at least 10 days’ sick leave to its empoyees in the course of the outbreak. Half of its board members were non-Japanese and half of its senior executives were female, Corporate Knights noted.

Indian IT consulting firm Tech Mahindra was a new entrant from Asia. It made almost no clean energy investments but generated 88.5 per cent of its revenue with the least amount of waste.

“The pandemic has accelerated existing growth trends in the solutions sectors of clean energy, technology and health sectors, so it is encouraging to see Asian firms from the health and tech-related sectors rising into the Global 100,” Toby Heaps, president of Corporate Knights, told Eco-Business.

Singapore’s City Developments Limited slipped three notches this year to 40th place. It directed 80 per cent of its research and development and acquisitions towards clean investments and emerged ahead of its real estate rival CapitaLand, despite a large pay gap between top management and the average worker—the firm’s chief executive officer earned 100 times more than the regular employee.

The number of Asia Pacific companies that made it to the index decreased to 17 from 18 last year, but it is a “relatively minor” drop, said Heaps.

The Global 100 list continues to be made up mostly of Western companies. Almost half (41) are from Europe, and 33 are from the United States and Canada.

Schneider Electric made a dramatic leap from 29th place last year to clinch the top spot this year. It earned 70 per cent of its revenue from, and directed 73 per cent of its investments towards sustainable solutions. Schneider also performed strongly in racial and gender diversity and in resource productivity and safety.

Corporate Knights said the company is at the heart of the decarbonisation megatrend. “Over the last 20 years, Schneider Electric has moved away from high-voltage electrical distribution to focus on data centres, decentralised electrical distribution (including off-grid solar storage) and smart solutions to make the world more electric, energy efficient, renewable and digital,” it noted.