Singapore has approved lab-grown meat for human consumption, but the big hurdle is convincing consumers to embrace it.

Lost in the unending stream of news about the COVID-19 pandemic is the recent report that Singapore has just approved lab-grown meat for human consumption.

The approval was granted by the Singapore Food Agency to US food company Eat Just for their cultured ‘chicken bites’.  The company called this a watershed moment for the future of meat. 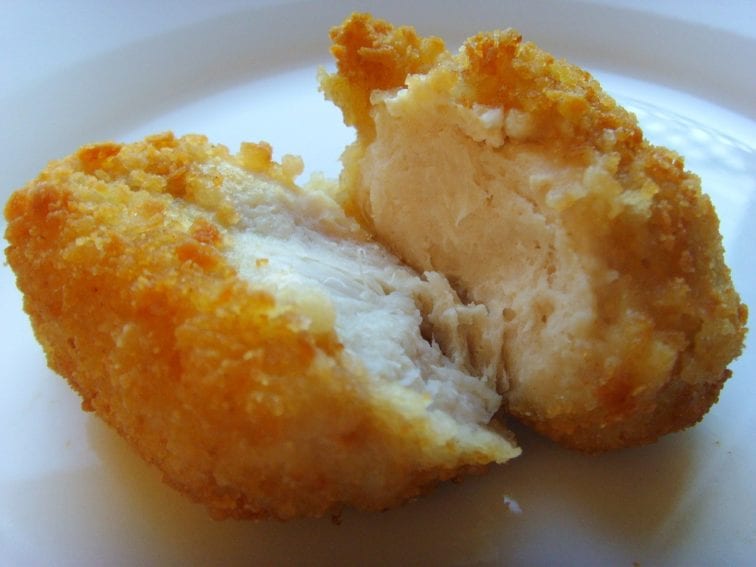 Lab-grown chicken nuggets may be on the horizon. Image: Lebensmittelfotos, Pixabay.

Meat consumption is a major factor contributing to climate change and world pollution, according to the UN. The development of cultured meat, therefore, bodes well for environmentalists and everyone concerned about saving our planet from the ravages dealt by climate change.

To make cultured meat, stem cells from the muscles of an animal are placed in a culture medium which is then put in a bioreactor to support the growth of new strands of muscle tissue. This process is similar to that used for the fermentation of beer and yoghurt.

The technology to make this lab-grown meat a reality is fast developing so that the cost of a cultured meat hamburger may soon be affordable — at US$10 or less, down from US$280,000 when it was first introduced to the world a couple of years ago.

What is lab-grown meat?

In simple terms, lab-grown meat is flesh grown outside of an animal’s body. It is real meat, obtained without slaughter.

It is called by various names, including clean meat, cultured meat, cellular agriculture, or in-vitro meat. The idea is to avoid conventional ways of producing animal products, reduce the number of animals killed for food and achieve a more sustainable and ethical global food system.

The composition of lab-grown meat is primarily animal cells. It starts out as a biopsy or sample taken from a living animal which is then reproduced into masses of cells.

They include livestock like cows, chicken, rabbits, ducks, shrimp, even tuna. These biopsies are brought into labs where they are duplicated without having to slaughter the animals themselves.

The technology has progressed in recent years to the point where there is now a race to move meat grown in laboratories onto supermarket shelves and dinner plates.

Cultured meat is unlike plant-based meats which have grown in popularity in the US and around the world.

Until now, cultured meat has faced many challenges in its development related to cost reduction, scale-up and regulatory approval.

No lab-grown meat product has yet reached the market but with the approval by the Singapore government of ‘chicken bites’ over the December holidays, it may not take much longer for that to happen.

The next step is to get customers to bite and develop the taste for it which may take a little time for it to happen.

A recent study by the University of Sydney and Curtin University found that 72 per cent of Generation Z in Sydney, Australia — defined by the study as individuals born between 1995 and 2002 — isn’t too keen on eating lab-grown meat.

Meanwhile, plant-based meat products are becoming more popular. Sales of alternative products have shot up in the past few years and investments in the industry are surging.

Their products are now available in fast-food restaurants and supermarkets across the world.

Currently, major companies from the developed world are in the race to develop the technology on cultured meat.

Cell-based meat might not yet send taste buds salivating, but they have certainly whetted the appetite of investors. It does look like the developed countries will corner the upcoming cultured meat industry.

Other than profit, there are health-related issues that compel a shift away from the uncontrolled meat diet of the human population, such as hypertension and heart problems.

One huge issue is the overuse of antibiotics in animal farming. Cattle and hog farming involve the use (overuse in most cases) of antibiotics on farm animals in countries like Australia and the US.

These countries allow farmers to feed antibiotics routinely to livestock to make them grow faster.

In Canada and the US, farm antibiotic use is about five times the level in the UK, data compiled by the Alliance to Save Our Antibiotics showed.

Meat produced this way is cheaper because the animals grow faster and can be kept in overcrowded conditions. But the meat is soon to be banned in the EU, for safety and public health reasons.

Overuse of antibiotics on farm animals gives rise to resistant forms of bacteria, known as superbugs, which threaten human health. Meat infected with resistant bacteria can directly cause infections in people and contribute to resistance to antibiotic treatments.

Cell-based meat might not yet send taste buds salivating, but they have certainly whetted the appetite of investors.

Another issue is the threat to the environment that agriculture and animal farming pose.

Livestock farming produces an estimated 15 per cent of global anthropogenic greenhouse gas emissions, which is more than the share of the whole transportation sector.

These are methane emissions related to feed production, manure management and use of energy.

Add to this the cutting down of forests for pasture and feed production which contributes to carbon dioxide emissions and biodiversity loss, especially in tropical regions.

Livestock production also releases nitrogen and phosphorus into waterways, leading to alteration of the nutrient balance and oxygen in lakes and oceans, with drastic consequences for fish and other aquatic species.

Cultured meat production is more resource-intensive than the production of meat substitutes from plant and microbial proteins. It would, therefore, need to provide additional benefits to ensure that consumers pay a higher price for it.

If the cultured meat technology is not able to produce lab meats that resemble animal meat in consistency and taste any closer to animal meat than plant‐based meat substitutes already do, consumers may not be willing to buy them and cultured meat could have trouble competing with those products.

Plant‐based meat substitutes are constantly improving in terms of texture and taste, and some products are already hard to differentiate from meat.

Cultured meat technology is still in the early stages and many problems need to be solved before it can be scaled up in a cost‐efficient and environmentally sustainable way.

However, one significant concern with lab-grown meat production is the possible impact on the agriculture sector itself, especially on small-scale livestock farmers in developing countries who might lose their jobs or livelihoods.

So, while the development of the technology continues, efforts are also needed to improve the efficiency and environmental performance of current crop and livestock production to protect them from future shocks.

This article was originally published on SciDev.Net. Read the original article.