The blame game and missing money: your guide to COP26

Next week, representatives from countries worldwide will haggle on strategies to drive down emissions and barter on policies to prevent a climate crisis. Here is your guide to the key debates and issues.

The COP climate talks begin in Glasgow, Scotland on Monday against a backdrop of extreme weather and an energy crunch that has seen parts of Asia contend with blackouts as they forage for fossil fuels.

This round of talks is perhaps the most important since 2015 when the Paris agreement was adopted by the vast majority of countries. They pledged to cap the increase in the Earth’s mean surface temperature to “well below” 2° Celsius compared with pre-industrial levels, and ideally to no more than 1.5°C.

Since then, “the science is just fundamentally worse. And the impacts are happening faster and harder than the scientists were saying back in Paris,” said Nick Mabey, chief executive of E3G, a climate think tank.

The Conference of Parties – COP – now has the difficult task of getting nearly 200 countries to agree on strategies to drive down emissions in order to reach the goal of 1.5°C to avert a climate crisis. This includes ironing-out the rules on the elusive-Article 6 which will govern a global carbon market. Meanwhile, rich nations need to thrash-out how to raise billions in climate finance that developing nations say is owed to them.

They will also need to decide whether or not to heed calls by COP26 president-designate Alok Sharma to “consign coal power to history” at a time when Asia’s largest economies are relying on fossil fuel energy to ramp up industry to get hobbled economies back on their feet following the Covid-19 pandemic.

Amid the political wrangling, back room lobbying and frosty relations, here are a few of the biggest issues that will dominate the global climate negotiations that start next week.

Where is the money?

Over a decade ago, developed countries committed to mobilising US$100 billion per year by 2020 to support developing countries to adapt to the impacts of climate change and transition to cleaner energy. The failure of richer nations to make good on their climate finance pledges has enraged emerging and lower-income economies who say that they cannot cut emissions faster without more money.

For negotiators representing emerging economies in Asia and climate-vulnerable small island states, they will push to ensure cash is accessible, predictable and is split equally between mitigation and adaptation.

In September, the Alliance of Small Island States (AOSIS), which includes Singapore, criticised the “minute share” of money awarded to Small Island Developing Nations (SIDS) compared to the trillions spent on fossil fuel subsidies by major emitters over the five years since the adoption of the Paris Agreement in 2015. 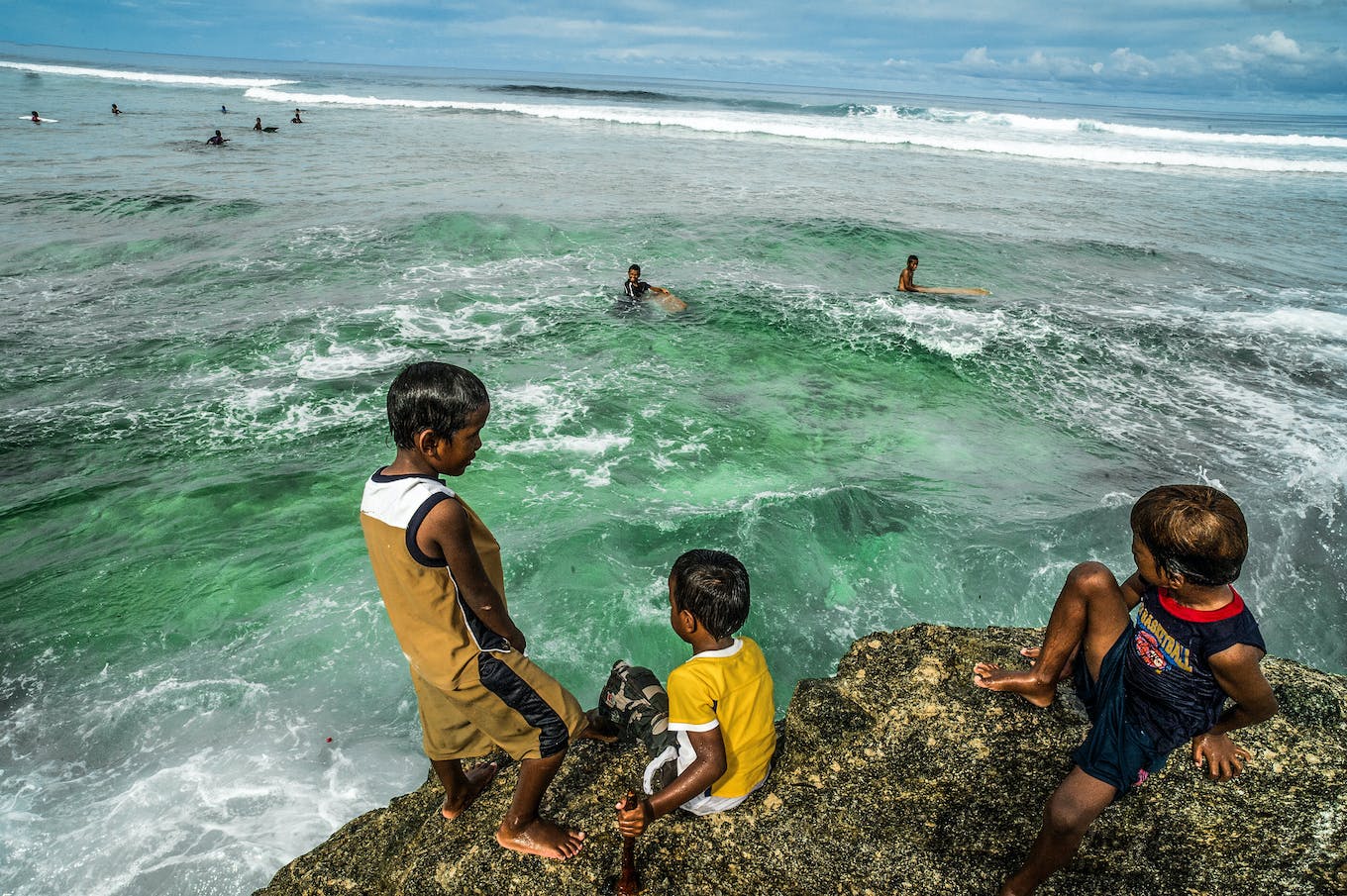 Children enjoy a day by the sea in Ebeye, Marshall Island. The Pacific Islands are home to eight of the 20 countries most vulnerable to climate change. Image: Asian Development Bank, CC BY-NC-ND 2.0

The ratio of loans to concessional and grant finance also remains a point of contention for AOSIS and the Climate Vulnerable Forum, a climate lobbying group of 48 countries which includes the Philippines and Bangladesh. Loans with strings attached, less-developing countries argue, will drive them into unsustainable levels of climate debt.

“The problem is that we don’t have any agreement on what climate finance is. Developing countries want a consensus on fixing criteria to climate finance,” said Dr Mizan Khan, a climate negotiator from Bangladesh.

The 2015 Paris climate agreement included language to address “loss and damage” but the technical details still haven’t been thrashed out. Climate-vulnerable countries charge that they should be compensated by developed, rich nations for their historical contributions to global greenhouse gases (GHGs) and the damage that they have caused to the environment that cannot be adapted to or avoided.

Over the past decade, extreme weather and climate-related disasters have killed more than 410,000 people and affected 1.7 billion around the world, according to the International Federation of Red Cross. Small island states, which are vulnerable to rising sea levels, are suffering economic losses multiple times greater than their gross domestic product as a result of climate impacts. 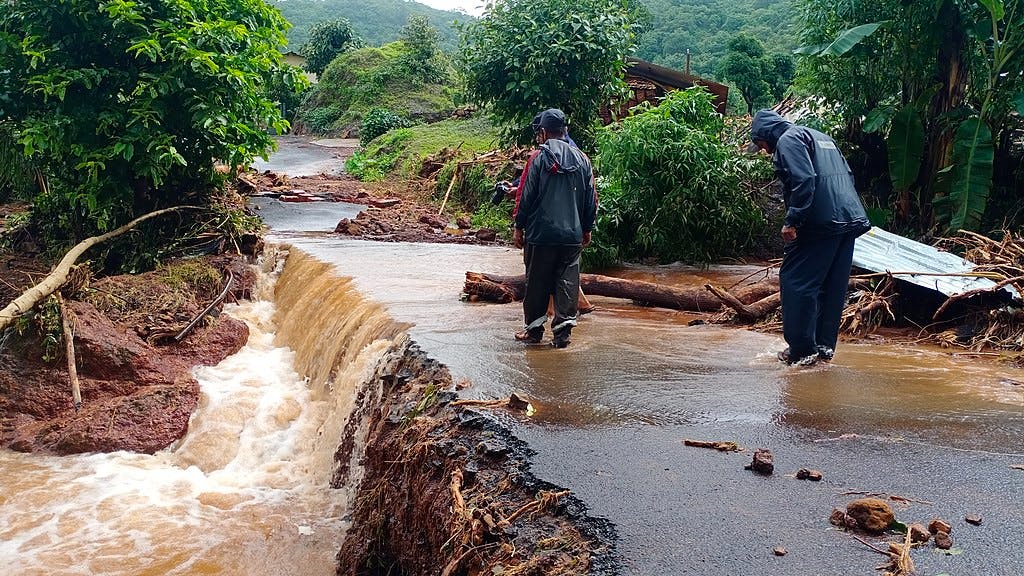 Destroyed roads during the floods in Patan block, Satara, Maharashtra in India. India’s climate ministry has said that it is seeking payment for the losses caused by climate disasters. Image: वर्षा देशपांडे, CC BY-SA 4.0

The most vulnerable developing nations are asking for a financing facility to avert, minimise and address loss and damage incurred by climate change. There has been political deadlock on this issue for years and there is still no clarity in terms of sources, scale and institutions.

Nationally Determined Contributions (NDCs) represent the commitments of each country to reduce GHG and adapt to climate change.

The Paris ‘ratchet mechanism’ is designed to raise ambition over time but the United Nations Framework Convention on Climate Change (UNFCCC) second synthesis report on NDCs, highlighted the misalignment of nearly all major emitting countries and the G20, a club of wealthy nations, from the 1.5°C pathway. Climate-vulnerable countries charge that rich, developed nations have caused the problem of climate change and must cut emissions to curb it. 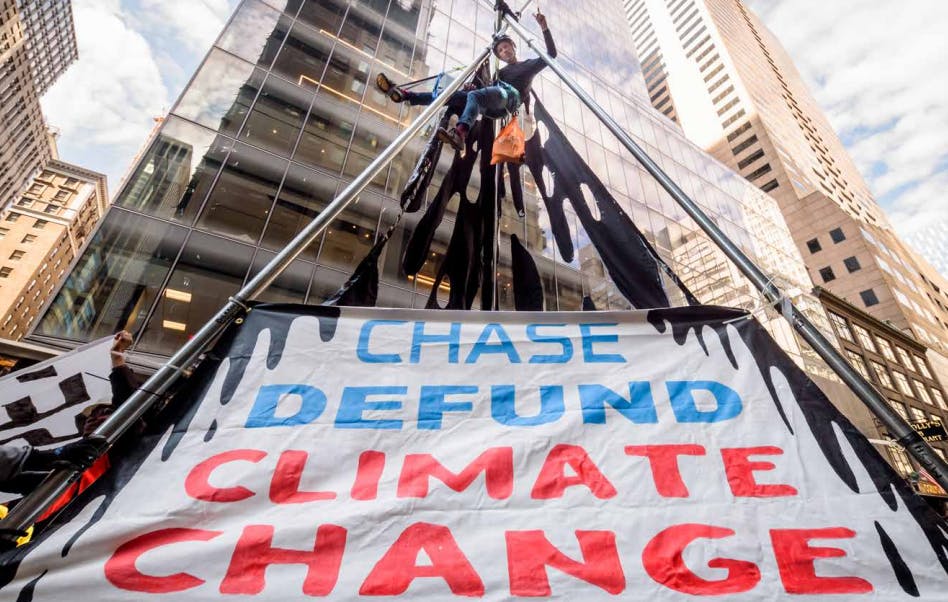 An activist protesting against JP Morgan Chase’s fossil fuel financing in the United States. JP Morgan has pumped $269 billion into fossil fuels expansion since the Paris Agreement, 36 per cent more than the next biggest funder of coal, oil and natural gas. Image: Banking on Climate Change 2020 report

The plans made so far would lead to a 2.4-degrees increase in temperature by the end of the century, according to the non-profit research group Climate Action Tracker. Several major economies, including China, India and Indonesia, haven’t submitted pledges. Unless there is movement on climate financing, there will not be much pressure on the middle-income countries to move on ambition, said Khan.

India will raise the issue of fairness during these negotiations, according to its environment ministry on Friday while laying out the country’s position on key climate issues ahead of COP26. The country’s annual per capita emissions stand at about two tons of carbon dioxide, compared to more than 16 tons for the US and less than half of the global per capita average.

Downstream of the talks, there will be further discussions around the issue of investment in gas in Asia, said Mabey. Ending public finance for fossil fuels will be a cornerstone of this issue and a firmer approach to 1.5, would see a move away from new fossil infrastructure builds. In Asia, this will lead to stranded assets, half of them likely to lie in China, according to Mabey.

This could lead to some pushback from key economies in Asia, which is bearing the brunt of the acceleration of the transition from 2°C to 1.5°C. Countries like India may push back on consigning coal to history in the context of an energy crunch and soaring gas prices.

For most countries, and non-governmental organisation observers, the option most conducive to maximising ambition would be for NDCs to advance in successive five-year intervals. If countries are allowed to pick and choose however, the essential function of the multilateral climate regime is likely to become more difficult, climate policy advisers have said.

Article 6 continues to dominate and agreement on the suite of rules to help establish carbon markets remains elusive.

“There’s a lot of emphasis, especially from the current presidency to finalise the Article 6 rulebook…but this comes with risks,” according to Jonathan Crook, policy officer, Carbon Market Watch, a non-profit.

“The technical dialogues and negotiations are stuck. You would need a political push to break through that. However, any progress on Article 6 must not come at the expense of environmental integrity. No deal on Article 6 is better than a rushed deal with unacceptable concessions.”

Discussions will likely centre on Article 6 and its three operative paragraphs, including: an accounting framework for international cooperation (article 6.2), the international carbon markets and how much revenue is allocated to the Adaptation Fund (6.4) and non-market approaches, such as emissions taxes (6.8).

Several issues remain unresolved including: how to avoid double-counting, additionality to ensure there is overall mitigation of global emissions, not just offsetting, the share of income with emerging economies and climate vulnerable small island states pushing for a bigger slice of proceeds to finance adaptation needs.

Country blocs, environmental lobby groups and analysts have said that the negotiations should focus on raising ambition and climate finance and not be eclipsed by carbon markets.

Indian Prime Minister Narendra Modi, who is at the helm of world’s third-biggest emitter of greenhouse gases, will be in attendance, as will leader of the second largest belcher of emissions, US President Joe Biden.

Australian Prime Minister Scott Morrison will also be there. Tagged a climate laggard, Australia announced on Tuesday that it will target net zero carbon emissions by 2050, but added it will not legislate the goal and instead rely on consumers and companies to drive emission reductions.

China’s leader, Xi Jinping will not make it to the conference in person, opting to send a special climate envoy, Xie Zhenhua instead. The Kremlin has said Russian President Vladimir Putin will not travel to Glasgow.

Beleaguered by a poor environmental track record and now accusations of “crimes against humanity” by his own senate, it is perhaps no surprise that Brazilian President Jair Bolsonaro is not making an appearance.

Mistrust between emerging and fossil-fuel rich nations have undermined progress in the past and will likely remain a factor in stalling the progress of talks next week.

A raft of leaked documents published by Greenpeace UK’s team of investigative journalists, Unearthed, revealed that countries are lobbying to weaken the language in a scientific climate change assessment report produced by the Intergovernmental Panel on Climate Change (IPCC), a UN body. The report lays the groundwork for the climate negotiations in Glasgow.

“The Paris Agreement is a gentlemen’s agreement,” says Khan, “which only works if each and every member of the club is a gentleman.”