Crunch time for nature at COP15 talks amid biodiversity crisis

COP15 is poised to be a pivotal moment. It is China’s first time overseeing a UN environmental summit, and the pressure is on to overcome the shortcomings of the ten-year Aichi Targets and the lack of progress at the recent COP27 talks.

Barely has the dust settled on the COP27 climate talks as thousands of delegates descend on Montreal, Canada this week for the UN Convention on Biological Diversity summit, or COP15, amid the looming threat of a sixth mass extinction.

COP15 is poised to be a pivotal moment. It is only China’s first time overseeing a UN environmental summit, but the pressure is on to overcome the shortcomings of the ten-year Aichi Targets and the lack of fossil fuel phase-out progress at COP27.

In Montreal, COP15 negotiators hope to finalise an accord that paves the way for a “nature-positive” future, as well as drum up enough support for conservation pledges from the 196 countries party to the UN Biodiversity Convention. 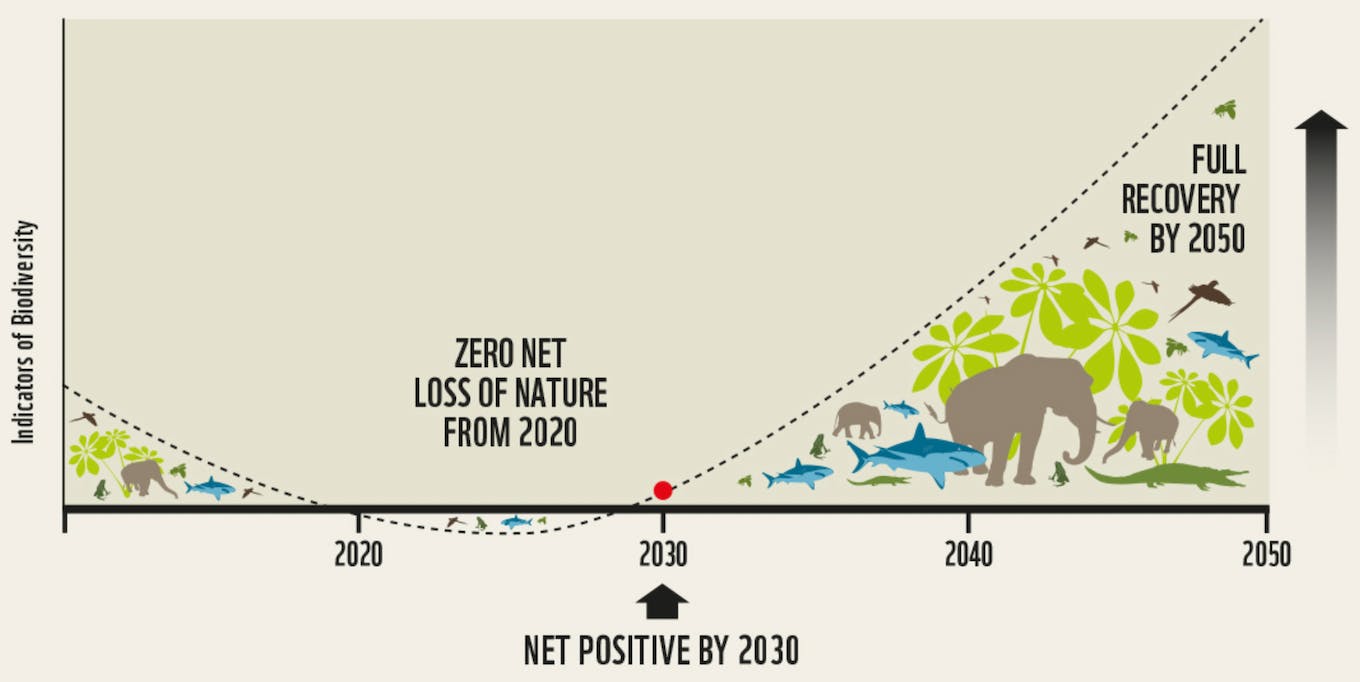 The Global Goal for Nature commits governments to take action to halt and reverse nature loss from a 2020 baseline and increase abundance to “positive” levels by 2030 [click to enlarge]. Image: naturepositive.org

Nature-positive is a goal for reversing the current decline in biodiversity back to pre-2020 levels by 2030 and to achieve a full recovery by 2050, according to the UN’s Global Goal for Nature.

“Our planet is in crisis,” highlighted Convention on Biological Diversity (CBD) executive secretary Elizabeth Maruma Mrema in a press conference leading up to COP15, noting that today an estimated 1 million animal and plant species are threatened with extinction due to human activity.

“Despite all our technological advances we are completely dependent on healthy and vibrant ecosystems for our water, food, medicines, clothes, fuel, shelter and energy,” Mrema continued.

“With so many outstanding issues, time is not on China’s side. As the COP15 president, China should work out a contingency plan to deliver a complex package with quality and ambition.” Greenpeace East Asia senior policy advisor Li Shuo said in a statement.

All parties at COP15 ─ especially the rich countries from the Global North who have profited the most from commodifying nature─must come to the table with the funds needed to protect biodiversity.

Among the headline ambitions at COP15 is the adoption of the 30X30 goals championed by the member countries of the High-Ambition Coalition for Nature & People (HAC). The commitment seeks to protect at least 30 per cent of the globe’s land and oceans by 2030.

Currently, only an estimated 15 per cent of the world’s land and 7 per cent of the ocean are declared protected sanctuaries. The 30X30 goals have now gained the backing of some 114 signatory nations. Notably, however, COP15 president China is not a member of the HAC.

“We need to reset the relationship between humans and nature,” said Dominic Waughray, managing director at the World Economic Forum. “Damage to nature from economic activity can no longer be considered an externality,” noting that some $44 trillion of economic value generation—over half the world’s total GDP—is dependent on nature and its resources.

Greenpeace Canada has, however, framed the 30 per cent goal as “the bare minimum,” citing an Intergovernmental Panel on Climate Change (IPCC) report that concludes that at least 50 per cent of the world’s land, freshwater, and oceans must be conserved to maintain global biodiversity and decrease vulnerability to climate hazards.

Why the Aichi targets failed

The post-2020 global biodiversity framework set to be approved at COP15 will hope to charter the Convention on Biodiversity (CBD) and its members’ course towards a mission for biodiversity protection by 2030.

The accord will replace the Aichi Targets—approved during COP10 held in Nagoya, Japan in 2010—which had five strategic goals and 20 associated targets to be achieved by 2020. In a 2020 report, the CBD conceded that “none of the Aichi Biodiversity Targets [were] fully met.”

The Global Biodiversity Outlook report would go on to note gaps in the level of ambition of national commitments to address the Aichi Targets.

The CBD has assured, however, that with decisive action, it is not too late to halt and reverse biodiversity loss.

Non-government organisations like The Nature Conservancy are calling on negotiators to forge an “ambitious” and “durable” framework that paves the way for nature recovery.

“We need a text with teeth,” wrote Sandra Diaz, a core member of Argentina’s National Scientific and Technical Research Council, in Nature. “This much we have learnt in the 30 years since the foundational 1992 Rio Summit drew attention to the impact of human activities on the environment: a strong, precise, ambitious [framework] does not in itself ensure successful implementation. A weak, vague, toothless [targets] almost guarantees failure.”

With some 80 per cent of the world’s remaining biodiversity concentrated in Indigenous territories, there is a resounding call to protect and recognise the rights of First Nations people as stewards of the environment at COP15.

Conventional and “colonial” approaches to conservation have in some cases evicted Indigenous peoples from their ancestral domains.

“The protection of nature is not about shutting people out,” said The Nature Conservancy chief executive Jennifer Morris in a statement. “Conservation for the coming decades must be based on authentic partnerships with the Indigenous Peoples and Local Communities. With good planning, substantive habitat protection goals can be met without displacing people or negatively affecting their way of life.”

At least 38 per cent of the planet’s remaining intact landscapes and freshwater and coastal marine habitats are cared for by Indigenous communities, accounting for some 17 per cent of global forest carbon.

Healthy ecosystems are vital in meeting 1.5°C warming targets as protected woodlands and sanctuaries can act as natural “carbon sinks.” According to a study by Woods Hole Oceanographic Institution, the world’s oceans are able to absorb about half of all carbon dioxide emissions from human activities.

“COP15 in Montreal is a once-in-a-decade opportunity to agree a global deal for nature, and we need leaders to show up and deliver,” said Helena Gualinga, a Kichwa indigenous youth climate leader from Sarayaku, Ecuador. “For generations, my community has coexisted with nature, while witnessing extraction and deforestation of our territories devastate wildlife, nature and people. Our existence is our resistance, when we uphold our Indigenous rights we safeguard key ecosystems for the planet.”

The initial draft of the post-2020 global biodiversity framework emphasises the importance of closing a $700 billion annual conservation financing gap by 2030.

“All parties at COP15 ─ especially the rich countries from the Global North who have profited the most from commodifying nature─must come to the table with the funds needed to protect biodiversity,” added Agnès Le Rouzic of Greenpeace Canada. “A successful funding mechanism needs to ensure that countries in the Global South are supported to protect and restore ecosystems subjected to destruction for the benefit of corporations and a wealthy few in the Global North.”

Ahead of China’s COP15 presidency, President Xi Jinping bared plans for a $232.47-million Kunming Biodiversity Fund to aid nature protection in developing countries and jump-start the conversation on biodiversity finance.

“China’s $230 million funding pledge is a welcome step, but our hope is that this is only the beginning of China’s financial commitment as the world’s second-largest economy and the host nation for COP15,” said Brian O’Donnell, director of Campaign for Nature, a collective of non-profits pushing for a 30X30 framework.

However, Friends of the Earth International, in a report, flagged prevalent corporate influence on the CBD and COP15, saying that the draft framework “fails to address unsustainable production methods and allows for business as usual” for large polluters.

“The participation of big business in the CBD reveals a fundamental conflict of interest: how could the most important contributors to biodiversity loss—the same companies that must pay dividends to their shareholders—promote the radical transformation we need?” the group decried, citing lobbying by World Business Council for Sustainable Development and the Business for Nature coalition, whose members include Amazon, Chevron, DuPont, Nestlé, Shell, and Unilever, among others.

Ahead of COP15, climate champions of the 2015 Paris Agreement cheered for the drafting of a transformative post-2020 global biodiversity agreement.

“There is no pathway to limiting global warming to 1.5°C without action on protecting and restoring nature. Only by taking urgent action to halt and reverse the loss of nature this decade, while continuing to step up efforts to rapidly decarbonise our economies, can we hope to achieve the promise of the Paris agreement,” the statement read.