US-dominated Covid funding: What does this mean for developing Asia?

In the Covid-19 vaccine race, US-based funders like the Gates Foundation have contributed the bulk of the US$2.5 billion for vaccine development. Does this pose a threat to poorer countries in Asia?

The dominance of any country or individuals in funding the Covid-19 vaccine may pose a threat for developing countries in Asia, medical experts have warned.

The world’s wealthiest nations and organisations are spending US$3.3 billion in Covid-related research, with the United States financing 41 per cent of the total amount, revealed a recent study.

Conducted by Research Investments in Global Health (RESIN) of the University of Southampton, the study found that as of October, 75 per cent of the global funding has been allocated to vaccine development (US$2.475 billion). The US government has contributed US$955 million.

The remaining US$395 million comes mostly from grant awards from the US medical research centre National Institutes of Health, and the Bill and Melinda Gates Foundation.

Leaders of the 20 biggest economies have vowed to spare no effort to supply Covid-19 drugs, tests and vaccines affordably and fairly to “all people”. Drugmakers Pfizer, Moderna, Johnson & Johnson, and AstraZeneca announced the efficacy of their vaccine candidates in November.

More money coming from Gates given to WHO or CEPI, which backs Covax, means that (the foundation) will continue to have a very strong say regarding important decisions shaping health policy priorities, like how and where investments will be allocated, not just for Covid but in other aspects of global health.

Dependence on others for vaccine supply comes with risks. Renzo Guinto, chief medical doctor and founder of Filipino non-governmental health and environment organisation PH Lab, said recipient countries that rely on wealthier nations or groups may become “beholden to donors”.

“In these times of crisis, any help is welcome, but safeguards will need to be put in place so that donors, whether governments or philanthropy, truly support health system strengthening and the achievement of national health goals,” Guinto told Eco-Business.

He added that although there are intergovernmental norms to ensure that recipient countries can decide on how funds will be spent and which issues to prioritise, these mostly apply to high income country donors, not philanthropy, which he said makes “foundations such as Gates’ really influential”. 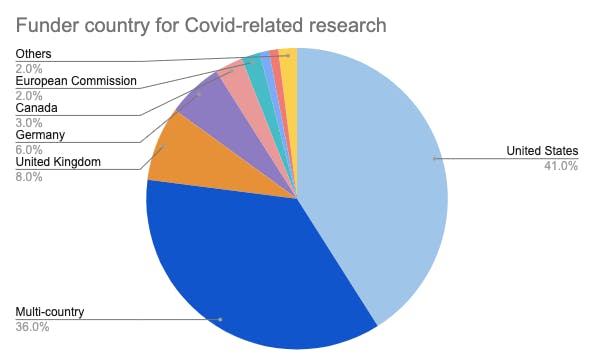 The RESIN study showed that after the US, the second-biggest funder of Covid-research was the Coalition for Epidemic Preparedness Innovations (CEPI), a global network of philanthropic and civil society organisations that develops vaccines to stop epidemics. It has received donations worth US$1.1 billion from national, charitable and private investments including the Gates Foundation.

CEPI, together with the World Health Organization (WHO) and Switzerland-based vaccine alliance GAVI, has launched Covax, a global vaccine allocation plan that pools funds from wealthier countries and non-profits to buy and distribute future vaccines to poorer countries.

In Asia, lower to middle-income countries like Cambodia, Indonesia, Laos, Myanmar, the Philippines, and Vietnam are among those that will be supported by Covax.

The US government stepped into that ecosystem—of academic researchers partnered with pharma entities—with massive funding. There is, naturally, quid pro quo: US will be first in line for vaccines it helped finance, which spawns inequity of access.

“More money coming from Gates given to WHO or CEPI, which backs Covax, means that (the foundation) will continue to have a very strong say regarding important decisions shaping health policy priorities, like how and where investments will be allocated, not just for Covid but in other aspects of global health,” said Guinto.

Kevin Baird, director of the Eijkman-Oxford Clinical Research Unit, which conducts studies on infectious diseases in Indonesia, echoed the downside of wealthy countries like the US funding the bulk of research and development as well as securing advance orders of the vaccine.

“The US government stepped into that ecosystem—of academic researchers partnered with pharma entities—with massive funding aimed almost wholly at mitigating the risks being taken by the pharma partners,” Baird told Eco-Business. “There is, naturally, quid pro quo: US will be first in line for vaccines it helped finance, which spawns inequity of access.”

Baird, who specialises in malaria studies, also said he feared neglect of developing Asian nations by the US-funded global health players as they tend “to be very much Afro-centric in outlook, strategy, and action”.

“Investments made by WHO, Gates and Gavi in malaria, for example, are nearly insignificant in Asia. The same biases may see neglect of the Asian nations in need of direct aid on Covid vaccines access,” he said.

However, the veteran microbiologist noted how the Gates Foundation engages academics to develop vaccine technologies with “key strings attached aimed at preventing inequity”, such as demanding agreements regarding open access to data and findings, which makes profiteering on intellectual property difficult.

He said: “If anything, the Gates Foundation engagement on this problem mitigates the risk of inequity.”

Gates-funded studies were previously accused by Aarata Kochi, WHO’s head of malaria research, of adopting “a uniform framework approved by the Foundation”, leading to homogeneity of thinking, and discouraging independent reviews of research proposals. In a memorandum written in 2008, Kochi said that the foundation’s money, while crucial, could have “far-reaching, largely unintended consequences”.

Ian Gonzales, who heads the infectious diseases cluster at the department of health in Northern Mindanao in the Philippines, disagreed that there is any downside to countries like the US or individuals like Bill Gates being heavily invested in Covid-related funding.

In fact, he said having them involved “will surely accelerate the process” of developing a viable vaccine.

“The concerns that we do have once a vaccine is available is the accessibility for lower and middle-income countries such as the Philippines. Fortunately, this has been anticipated and the Covax facility will accelerate vaccine development while ensuring equitable access for all countries,” Gonzales told Eco-Business.

Through the Covax facility, nearly two billion doses of Covid-19 vaccines will be shipped and flown next year to over 92 developing countries, including those in Asia, in a “mammoth operation”, the UN children’s agency UNICEF said.

“We are mapping out commercial routes and looking into the possibility of charter flights to countries in Asia, if needed, as a result of commercial capacity limitations. UNICEF will continue to assess transport capacity needs going forward to ensure we can deliver vaccines in a quick and efficient manner,” UNICEF told Eco-Business.

The WHO reiterated that it launched Covax specifically to guard against so-called “vaccine nationalism”, which is marked by wealthy countries hoarding Covid vaccines, its Philippine country office said.

“WHO is working with its vaccine pillar Covax to speed up the development and manufacturing of a safe and effective vaccine and ensure that there is fair and equitable access to these vaccines for all countries, with an aim of ending the acute phase of the pandemic in 2021,” it said.

“Instead of having enforceable mechanisms, WHO, member states and the implementing institutions continue to rely on voluntary contributions of the pharmaceutical industry, which refuses to offer non-exclusive licenses with worldwide coverage to facilitate global access,” MSF said in a statement in October.

“Instead, we have witnessed the ‘business-as-usual’ practice of pharmaceutical corporations pursuing secretive and monopolistic business agreements, perpetuating inequalities and inequities in access.”

It also noted how wealthy nations like the US and European Union states have already forged multibillion-dollar supply deals with drugmakers and purchased 3.8 billion doses of potential coronavirus vaccines, leaving less available for poor nations.

This is not the first time that wealthy countries have grabbed the lion’s share of vaccines and other drugs needed to fight a pandemic. In 2005, doctors from Asia called out nations like the US and UK for stockpiling antivirals which were developed to counter the H5N1 influenza or bird flu pandemic.