Global warming of 2C could ‘double’ flooding costs in China compared to 1.5C

Economic losses from flooding in China at 2C of global warming could be double those at 1.5C, research suggests.

The study, published in the journal Natural Hazards and Earth System Sciences, estimates future flood risk across China under 1.5C and 2C of warming and its impact on people and wider society.

Compared with 1.5C of global warming, “the probability of the severe flood would be significantly higher for global warming of 2C”, the study finds, adding that “in some areas, the probability would double”. The direct economic losses at 1.5C would total around $33bn per year (£27bn) for “severe” floods, rising to $70bn (£57bn) for “mild” floods that would affect more of the country. At 2C, these projected costs approximately double, the authors say.

Flooding would have the largest impact for the “social economy in the regions with lower altitudes and smaller slopes in eastern China”, the study says. However, the range of medium-high flood risk will “gradually expand westward and northward”.

The study presents a “clear message that the warmer we let the climate get, the greater the losses of dollars will be from flooding”, a scientist not involved in the research tells Carbon Brief. They add that the findings are “important” because they allow policymakers to “see the economic cost of not responding”.

In late July 2021, a record-breaking deluge dumped close to a year’s worth of rain in just three days on the central Chinese city Zhengzhou, home to 12 million people. The resulting flooding became the deadliest natural disaster for the city in decades, with close to 400 people killed.

Unprecedented rainfall also hit the nearby cities in Henan province, triggering flash flooding and landslides. Crops were submerged, more than 50 thousand houses were destroyed and more than 1.4 million people were evacuated from their homes. Overall, the rain caused direct economic losses of 120bn yuan (£15bn), including 41bn yuan (£5bn) in Zhengzhou alone.

It has a clear message that the warmer we let the climate get, the greater the losses of dollars will be from flooding. Studies like this are important because policymakers can see what the economic cost of not responding is.

In the wake of the floods, mentions of climate change increased, though modestly, in news reports on extreme weather in Chinese media. Wang Zhihua, head of disaster relief at the China Meteorological Administration, blamed climate change for the natural disaster in a press briefing after the flood. He said:

“The increased likelihood of extreme weather has become one of the biggest risks facing the world, which requires our great attention. For the response, the focus is to step up monitoring and early warning capacity.”

Flooding drives the largest economic losses among all other natural disasters in China in recent years, but flood insurance is not yet widely taken up. In 2021, China’s economic losses from flood-related events stood at $25bn, behind Europe’s losses of $41.8bn, according to Zurich-based reinsurer Swiss Re.

This year, extreme weather hit the southern parts of China again with torrential rains, disrupting the lives of half a million people, with flash floods that turned roads into swollen rivers and submerged houses and cars.

The new study, conducted by researchers from the Chinese Academy of Sciences, compares the flood exposure and social economic impact from rainfall-driven flooding across China, under different future scenarios.

The researchers use the global warming levels of 1.5C and 2C, in keeping with the limits set out in the Paris Agreement. They use two different scenarios for these levels – the intermediate emissions of RCP4.5 and the very high emissions of RCP8.5.

The researchers also use social and economic data derived from the shared socioeconomic pathways (SSPs). These scenarios, which fed into the Intergovernmental Panel on Climate Change (IPCC) sixth assessment report, set out five broad narratives of how the world develops in future.

They use SSP1 (“sustainability”) and SSP3 (“regional rivalry”) to “assess the population affected and the economic risks posed by floods to represent the exposure of the risk-bearing bodies”.

In the figure below, the maps show the economic exposure to “severe” (top), “moderate” (middle) and “mild” (bottom) flooding in millions of dollars at the warming levels of 1.5C (left) and 2C (right). These flooding categories correspond to maximum accumulated three-day rainfall values of 30-35 to 50mm, 150 to 250mm and more than 250 mm for mild, moderate and severe, respectively. The dark blue shading shows the worst-hit areas. 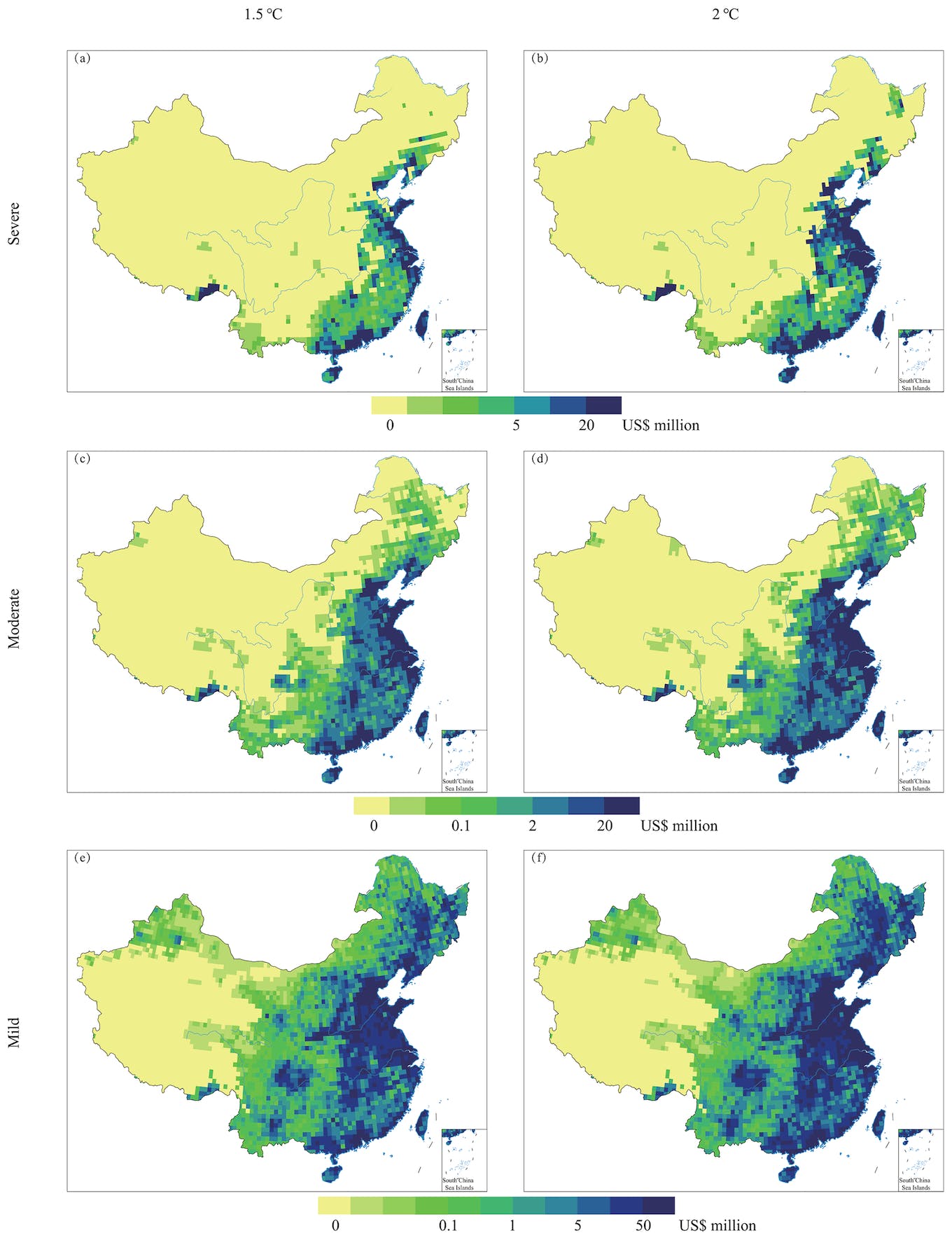 Spatial patterns of the economic risks posed by severe (top), moderate (middle) and mild (bottom) floods for 1.5C (left) and 2C (right) of global warming under the RCP8.5 scenario. The designations employed and the presentation of the material on this map do not imply the expression of any opinion whatsoever on the part of Carbon Brief concerning the legal status of any country, territory, city or area or of its authorities, or concerning the delimitation of its frontiers or boundaries. Source: Liu et al. (2022).

Under RCP8.5, the direct economic losses at 1.5C would total around $33bn (£27bn), $42bn (£34bn) and $70bn (£57bn) for severe, moderate and mild floods, respectively, the study finds. The “economic risk posed by floods of different grades would mainly increase under the effect of economic growth for 2C”, the authors say, approximately doubling for the different flooding grades.

For RCP4.5, the spatial distribution of economic losses “would be basically consistent with those at RCP8.5”, the authors say. They write:

“[T]he distribution area of the floods under the RCP4.5 scenario would be broader; however, under the RCP8.5 scenario, the floods would affect more people; the direct economic losses would account for a larger proportion of the GDP; and the adverse impacts on the social economy would be more serious.”

The study estimates that 11 million people will be at risk of severe floods for warming of 1.5C under RCP8.5. This rises by around 2 million people under 2C, the study says. Many of the affected communities are in the coastal regions of east and south China, which is where several of China’s biggest cities are located, including Shanghai and Guangzhou.

The economic risks posed by severe floods are concentrated on east China’s coastal areas and spread further inland at higher levels of warming, the authors note.

“The paper did a good job comparing both kinds of scenarios of warming and the concentration pathways and takes a look both at population exposed and assets exposed,” says Dr Beth Tellman, assistant professor of geography at the University of Arizona, who researches flood risk and was not involved in the study.

She notes that the paper does not touch much upon the vulnerability of the different regions in China. This is a part that is “missing”, she tells Carbon Brief:

“To me, they don’t really get much of the vulnerability of the social system, adaptability to dealing with floods, or the social situations of those regions.”

Dr Simon Allen – an academic associate at the University of Zurich who also was not involved in the study – says the paper offers an important overview of the flood risk posed by rainfall in China and identified the hotspots. He tells Carbon Brief:

“It has a clear message that the warmer we let the climate get, the greater the losses of dollars will be from flooding…Studies like this are important because policymakers can see what the economic cost of not responding is.”

Allen credits the researchers for examining flood risk from an integrated perspective instead of just focusing on physical hazards, telling Carbon Brief:

“So, IPCC, in 2014, [published] its fifth assessment report [on climate impacts]. That’s when it introduced for the first time this integrated concept of climate risk. Since then, we see more and more moving away from just focusing on hazards.”

Allen makes the point that the study provides a basis for a deeper understanding of local-level vulnerability, which needs further research. This conclusion is reflected in the study which says:

“It is urgent to clarify the required adaptation to climate change and implement plans for the different possible situations in order to reduce disaster losses and ensure the sustainable development of the social economy.”