Climate change will make it harder for world’s poorest to migrate, study says

Climate change will make it harder for the world’s poorest people to migrate, leaving them “extremely vulnerable” to continued impacts and increased poverty, new research finds.

The paper, published in Nature Climate Change, finds that as the impacts of climate change become more severe, people will be increasingly affected by “resource-constrained immobility” – meaning that they do not have the resources to migrate.

The paper underscores the importance of policymaking to address the challenges brought to vulnerable populations by immobility in addition to climate-driven migration.

A scientist not involved in the study tells Carbon Brief that this work supports “[continuing] to further understand the likely plight of those experiencing ‘resource-constrained (international) immobility’ [and] its consequences”.

As the climate warms and extreme events around the world become more severe, one adaptation strategy is to migrate to avoid the worst impacts of climate change.

In 2020, there were around 281 million international migrants, constituting more than 3 per cent of the world’s population. People may migrate to flee persecution, to seek economic opportunity, or to join family abroad. Climate change has accelerated international emigration – or out-migration – especially when it is linked with armed conflict.

However, the authors of the new study note that less research has focused on people living in areas threatened by climate change who are unable to migrate due to resource deprivation. They call this “immobility”.

Lead author Dr Hélène Benveniste from Harvard University’s Centre for the Environment told a press briefing that “climate change does not only affect the aspiration to move, but also the ability to do so”.

If climate change negatively affects the ability of people to migrate internationally safely, orderly, and humanely, the social justice implications of climate producing immobility are quite clear.

To assess the scale of this issue, the authors first modelled the movement patterns of people at various income levels to assess how material resources limit or encourage migration. They also modelled how much income migrants send back to their origin communities from their new destinations.

Then, they embedded this model within an integrated assessment model (IAM) to simulate the impact of climate change on resource deprivation and subsequent immobility. This allowed them to project migration – and, in turn, immobility – for each income quintile (each fifth of the income distribution) in 16 world regions for this century.

To determine the impact of climate change on resource-constrained immobility, the authors ran the model both with and without damaging impacts of climate change on the economy, and compared the number of migrants. They investigated both “baseline” and “catastrophic” damages from climate change. The latter were calculated such that global GDP loss from damages equals 50 per cent for an increase in temperature of 6C. 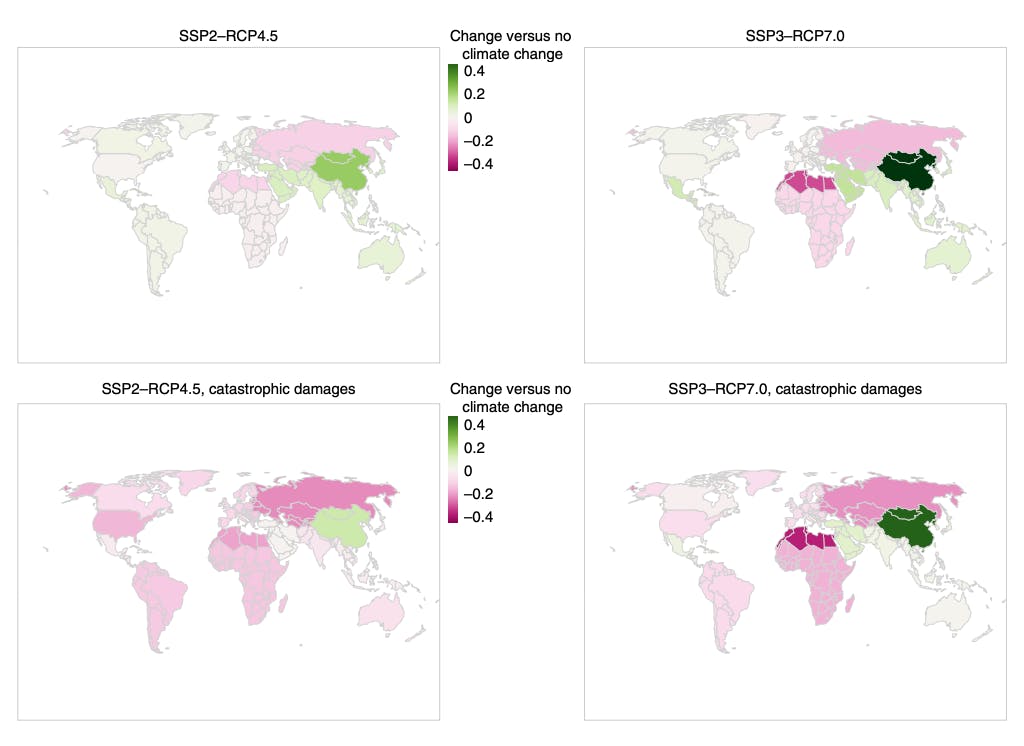 The authors found that more pessimistic development and climate scenarios do not drive resource-constrained immobility in a greater number of regions. Instead, the decrease in migration of the poorest groups becomes “much more substantial” for sub-Saharan Africa, North Africa and the former Soviet Union.

For the lowest-income populations in these three regions, resource constraints resulting from climate change will lead to 40,000, 40,000, and 25,000 fewer migrants, respectively, over the last decade of this century, the authors add.

When including catastrophic damages, on the other hand, migration from some regions in Asia and Central America increases because of a greater pull towards richer regions of the world, the paper finds. In particular, the paper says that climate change may have an overall “beneficial” economic impact on China until late in the century. This has a knock-on effect on migration because individuals will have the resources to move out of the country.

However, the authors say that, even after this, these populations are able to use these resources to migrate and improve livelihoods in the origin region through remittances – funds sent back from migrants to their origin regions.

In their model of migration and remittance, the authors considered how population size and income affect migration.

The paper finds that regardless of whether damages are proportional, independent of, or inversely proportional to income, the poorest people will see the greatest damages as a result of climate change.

In the SSP3-RCP7.0 scenario, for example, damages could breach 100 per cent of income in North Africa and the former Soviet Union under the assumption of inverse proportions of damages according to income.

The figure below shows the differences between income earned through remittances and income lost through climate change damages for the 16 world regions under five emissions scenarios. Negative values on the left indicate that remittances are insufficient to compensate for damages. 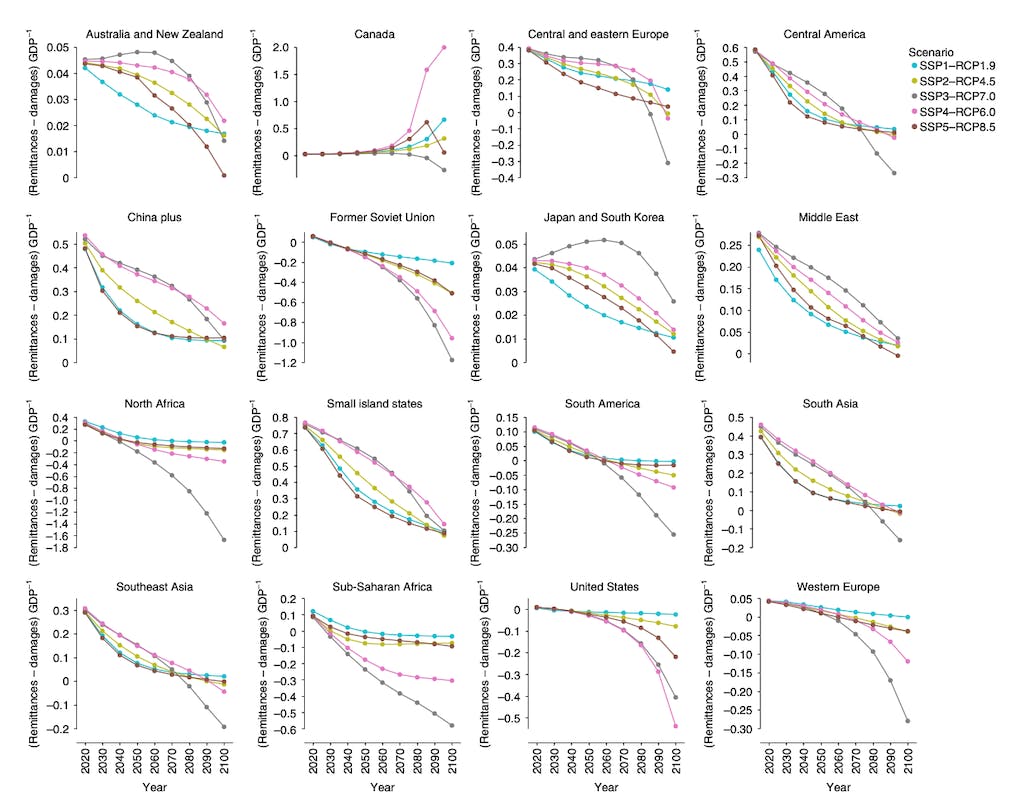 Remittances from migrants belonging to the lowest income quintile in origin regions could help sustain livelihoods where they are broadly affected by climate change damages, the authors say. But, by mid-century, the poorest groups in more than half of the studied world regions would be unable to compensate for damages through remittances even in the medium emissions scenario.

In 11 regions – including sub-Saharan Africa, the US and North Africa – the study finds that in the “more pessimistic” emissions scenario of SSP3-RCP7.0, remittances would not compensate for damages for the poorest people in these populations.

Even for the “medium” scenario of SSP2-RCP4.5, damages are greater than remittances in 10 regions, the authors say. For these groups, resource loss would occur as a result of climate change-induced migration, they add.

This paper reveals a “potentially devastating” impact of climate change on the world’s poorest communities and suggests the “limits” of migration as an adaptation strategy for those affected.

The authors state that this issue “should be of immediate and substantial policy concern”. They urge international institutions and agreements to address immobility with an emphasis on “differing local contexts” with regards to its impact on people of different ages and genders.
When questioned about the climate-justice implications of this paper, Dr Fernando Riosmena – an associate professor of geography at the University of Colorado at Boulder, who was not involved in the study – tells Carbon Brief:

“If climate change negatively affects the ability of people to migrate internationally safely, orderly, and humanely and in ways that might produce benefits for migrants […], the social justice implications of climate producing immobility are quite clear.”

Similarly, Benveniste tells Carbon Brief that, “in terms of policy responses, the actual needs of [immobile communities] are arguably as [substantial] as the people who end up being displaced by climate change”.

When questioned about the methodology of the paper, Dr Chi Xu – a professor at the Nanjing University School of Life Sciences, who was not involved in this research – tells Carbon Brief that “while the authors [consider] a rich array of factors” in simulating immobility, “it is still extremely hard to anticipate climate migrations, as migration also has complex causal links with many other factors”.

Dr Riosmena also says that since the “negative impacts [of climate change] are especially concentrated among those least connected to pre-existing international migrant networks”, future work could focus on how these networks influence migration behaviours in a climate context.

In addition, the authors suggest that further research could focus on “internal immobility”, or movement within countries  – rather than international immobility – and what impact climate change could have.