From river trash shepherds to food waste-fighting cockroaches, here are 19 of our favourite sustainability innovations of 2019.

At a media workshop held by the World Bank and Eco-Business in Singapore earlier this year, it emerged that news consumers are growing tired of the doom and gloom in climate reporting, and are turned off by the constant flow of news about the impending end of the world. They want solutions.

With that in mind, Eco-Business hunted for some innovations that gave us a bit of hope this year.

This year, Sweden opened a road that charges your electric car while you drive it. The road is embedded with an electric rail that can charge e-vehicle batteries as cars pass over it. A moveable arm attached to the bottom of the vehicle is lowered on to the road to draw up the charge. There’s no electricity on the surface of the road, so it’s safe to walk on.

The Great Bubble Barrier, co-invented by Dutchman Philip Ehrhorn, shepherds plastic detritus to the side of rivers using bubbles instead of physical barriers, which can harm wildlife. It works like this: a device laid diagonally on the bottom of a river pumps air through a tube. The rising bubbles bring plastic to the surface, and the flow of the river ushers the trash to the riverbank, where it can be retrieved. Tests have shown it can divert more than 80 per cent of rubbish from entering the ocean.

What if the waste heat produced by ovens, computers and airconditioning exhausts could be converted into electricity? Researchers from Hong Kong University found a way to reuse low-grade heat waste by developing a low-cost energy recycling cell, which is bendable and stackable.

Invented by Ximin He and her colleagues at the University of California, artificial sunflowers known as SUNBots mimick the sun-loving behaviour of plants to harvest solar energy. Less than one millimeter in diameter, the fake sunflowers use materials that expand and contract with heat to bend towards sunlight. The devices could increase the efficiency of solar power.

Construction of what could be the world’s 3D-printed neighbourhoood got underway in a rural, flood-prone part of Mexico in December. The 50 3D-printed houses slated to go up in Tabasco are designed to replace the homes that residents living in extreme poverty built themselves, out of whatever materials they could afford. 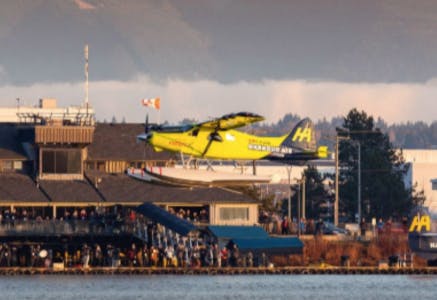 Although still a long way off, fully electric commercial air travel took a step closer to reality in December, when an e-plane took off close to Vancouver, Canada. Though it flew for less than 15 minutes and only seated six people, the Harbour Air seaplane  stirred hope that fuel-guzzling jets could soon be replaced by a sustainable alternative.

American car giant Ford teamed up with fast food chain McDonald’s to turn coffee waste into car parts. Besides diverting food waste from landfill, the bioengineered car parts will be lighter and use less petroleum.

A new protein made with microalgae, which requires just 0.02 hectares of land to cultivate, can be used in anything from dietary supplements and cooking oil to biofuel. Made by plant-based seafood company Sophie’s Kitchen, the alternative protein won this year’s The Liveability Challenge, a global search for ideas to make Southeast Asia’s cities more liveable and resilient.

Swarms of drones can plant trees 150 times faster than traditional methods, by firing seeds with speed and accuracy into the ground via biodegradable pods. The company behind the idea, United Kingdom-headquartered Dendra Systems, has a target of planting 500 billion trees.

Water cleaned by the sun

A new material that works in the same way a magnet attracts metal can nullify nearly every known disease-causing bacteria in water, according to a paper published in scientific journal Chem in February. Using sunlight and a photocatalyst to clean water has been done before, but this new innovation means that there are no pollutants left behind that previous techniques failed to remove.

Carrier bags and straws made from the starch in the roots of cassava trees, developed by Malaysia-based social enterprise Green Hope, take a few months to biodegrade instead of about 400 hundred years like plastic bags. Unlike other bioplastics made from edible crops such as corn that can disrupt food chains, cassava is not a staple food in the country where it is grown, Indonesia.

Shanghai was the first city in China to enforce new regulations for waste management this year, with steep fines for citizens who do not sort their waste properly. To help people sort their trash, online retailer JD.com created an app that identifies four waste categories—wet, dry, hazardous or recyclable. All consumers need to do is send a photo of their trash to JD.com, and artificial intelligence will categorise it for them. JD.com’s rivals Alibaba and Tencent also launched trash-sorting programmes this year.

Every second, a truckload of clothes is dumped into landfill. With this in mind, UK-based company Teemill makes new t-shirts out of old ones, and everything they make is designed to be sent back when it is worn out. Also, every link in the supply chain is powered by renewable energy. 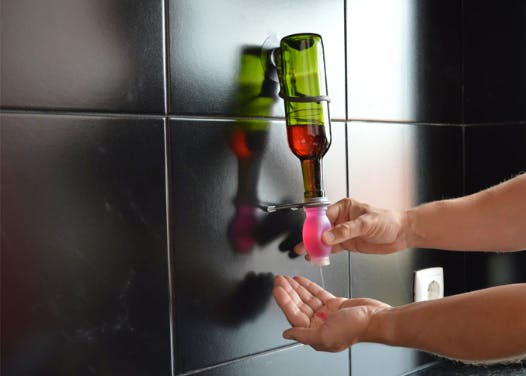 A wine bottle upcycled into a soap dispenser. Image: Unicow

Whisky bottles, Coke bottles, wine bottles, any sort of bottle will do for the Unicow, an upcycled wall-mounted soap dispenser that aims to replace single-use plastic soap dispensers. Though the Danish invention, which costs US$15 and consists of a wall mounting bracket and a plastic teat, only received limited funding on Kickstarter and promotes itself with a video featuring a dodgy parody of a David Attenborough nature documentary, it was another sign that entrepreneurs saw sustainability as a business opportunity this year.

On a cockroach farm in Jinan, China, one billion cockroaches eat through 45 tonnes of food waste a day that would otherwise be landfilled. The cockroaches are ground up and used as a food source for livestock. Cockroach farms became big business in China in 2019.

From desert to soil

Twelve million hectares of productive land are lost every year due to desertification and drought. Using a mixture of clay and water called liquid nano clay, Norwegian company Desert Control sprays the concoction half a metre deep into sand, enabling the sand to hold water, and crops to be grown.

One of the biggest impacts of one of the most popular articles of clothing, jeans, is water use. This year, Wrangler became the first jeans brand to dye denim using foam, a technique that dramatically reduces water use. 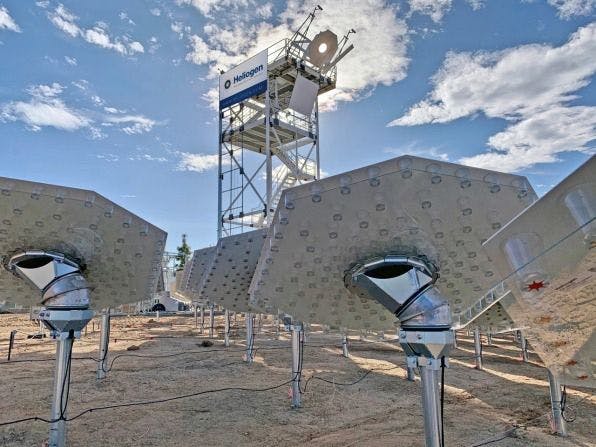 A technology startup called Heliogen has created artificial intelligence-enabled concentrated solar power that can generate so much heat—up to 1,000 degrees Celsius—that it can now be used in energy-intensive industries such as steel and cement manufacturing.

Civil engineering students from the University of the Philippines invented an alternative to regular concrete made from recycled materials such as fly ash and waste glass, combined with a common type of rock found around the university campus. The eco concrete could replace gravel and cement as a building material.

Amid bleak news such as the inaction of world leaders on climate change, these individuals have inspired through their efforts to protect animal habitats, reduce waste and mobilise society.
People who stood up for our planet in 2019