From 300 entries, a sustainable source of protein made with microalgae was awarded top prize in a global search for solutions to make Southeast Asia's cities cleaner, greener and more comfortable places to live.

Sophie’s Kitchen, a firm that makes a sustainable plant protein, is the winner of The Liveability Challenge 2019, a global search for ideas to make Southeast Asia’s cities more liveable and resilient.

Its idea emerged on top of a shortlist that included a 3D printer that uses organic materials, a low-energy airconditioning unit, a drink cup rental service, an energy-efficient data centre, and a system that converts diesel engines to hydrogen.

The protein, made with microalgae, can be used in anything from dietary supplements and cooking oil to biofuel, and will become part of a global market for alternative protein set to be worth US$16 billion by 2025, according to Eugene Wang, Sophie’s Kitchen’s co-founder and chief executive.

In pitching his company’s sustainable protein, which will be available for US$2 a kilogram, Wang explained that while growing a tonne of protein from beef uses 141 hectares of land, to grow his protein requires just 0.02 hectares of land.

We want to turn Singapore into a protein powerhouse.

The S$1 million in prize money will go towards setting up a research and development facility in Singapore, he said in his pitch. “We want to turn Singapore into a protein powerhouse,” said Wang, a Taiwanese based in the United States who founded the Californian company in 2011.

One of the judging panel, Hock Chuan Lim, chief executive of Temasek Foundation Ecosperity, said: “The decision was unanimous. We think that plant-based protein will become a substitute for meat protein. We hope they can take it to the market quickly so that its benefits will be felt.”

The best of the rest

Among the other ideas to gain recognition at The Liveability Challenge was Revolv, a service that enables consumers to rent rather than buy containers for drink takeaways, and so cut out single-use plastic from the system. Revolv was granted a crowdfunding campaign worth S$500,000. 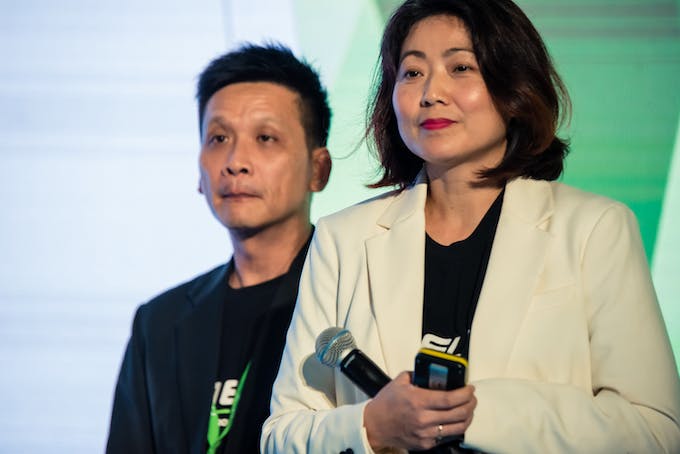 The Neuto team field questions from the judges at The Liveability Challenge. Image: Eco-Business

Another winner was Neuto Heev, a company that can turn diesel engines green by powering them with hydrogen. If all diesel cars in Singapore switched to Neuto’s technology, fuel costs would drop by 25 per cent, US$100 million would be saved in healthcare costs and 1 million tonnes of carbon emissions saved, its inventors claimed. Neuto was awarded a six-month mentorship with GoImpact.

Also awarded a six-month mentorship programme was Chitonous, a company that 3D prints furniture from organic material. The firm is able to not only replace a form of plastic as the building material, but can make 3D printing 20 times cheaper.

The final winner was an idea for an energy-efficient airconditioner, which was a collaboration between three firms: Besi, Flexi Singapore, and Dewcon USA. The low-carbon chiller, which works by absorbing water from air, was awarded a fundraising campaign worth S$1 million and a place in the GoMassive Bootcamp Incubator Programme.

Jessica Cheam, Managing Editor of Eco-Business, commented: “The 2019 edition of The Liveability Challenge has significantly grown since its inaugural launch. The growth in the number of submissions as well as partner organisations reflect a huge and growing interest in the region in finding and scaling sustainability solutions.”

“Given the climate crisis we are facing, it is ever more crucial for us to effectively allocate capital to the solutions we need to rapidly achieve a low-carbon, sustainable, and liveable future. The Liveability Challenge plays a key role in helping game-changing solutions reach the market, and together with our partners, we will continue to grow the ecosystem in Asia dedicated to the region’s sustainable development,” she said.

The inaugural Liveability Challenge – presented by Temasek Foundation and organised by Eco-Business – last year was won by RWDC Industries, a Singapore-based company that makes a material from plant-based oils. RWDC has a mission to deploy its material to replace single-use plastic.