How can journalists effectively tell the climate story in Asia?

Although the climate crisis is slowly gaining media attention, journalists from across Asia still face an uphill task of reporting on the environment. This year, World Bank Group and Eco-Business brought together over 20 journalists for the Innovate4Climate 2019 Media Fellowship to learn how to best report on the biggest story of our time.

Until recently, climate-related stories rarely made headlines, even though climate change is a global crisis that cuts across borders and touches virtually every beat in the newsroom, said media experts at the Innovate4Climate (I4C) 2019 Media Fellowship in Singapore last week.

Speaking to a room of journalists from around Asia at the Marina Bay Sands Convention Centre, Kaia Rose, multi-media and film content lead at the World Bank Group said, “Climate change is an economic story, a public health one and at its heart, a human story.”

“The interesting thing we have to think about as media professionals is how do we weave the climate story into everything else we’re writing about? How do we find that climate thread in stories that might not appear, on the surface, to be related to climate change?” she added.

Organised by the World Bank Group and EB Impact, the sister non-profit organisation of Asia Pacific-based sustainability media organisation Eco-Business, the fellowship brought together journalists from Singapore, Bangladesh, Pakistan, Indonesia, India and the Philippines in a one a half day media programme that equipped journalists with skills to report on climate change and sustainability in the region. 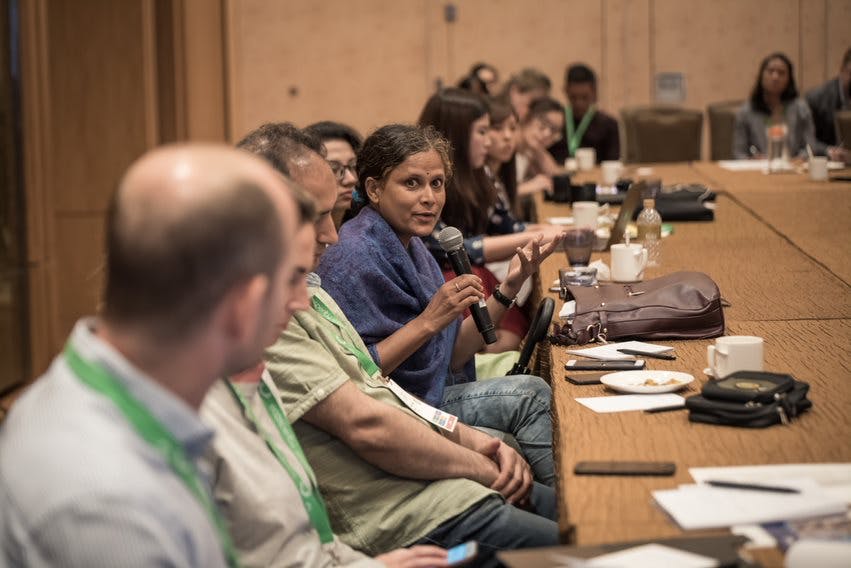 Environmental journalists face challenges such as insufficient support, time and space for climate reporting in their newsrooms. Image: Eco-Business

Journalists also got the opportunity to cover global trends in finance, technology and innovation at I4C’s first edition in Asia, which took place during Singapore’s largest sustainability week of the year.

“Very often, the message that we’re giving on climate change is that it’s big problem which is often overwhelming and frightening to the audience. But we have to begin to think beyond those messages and focus on the solutions, which is what the discussions are attempting to address,” said Craig Hobbs, senior consultant at Connect4Climate, a global partnership programme launched by the World Bank Group, Italy’s Ministry of Environment, Land and Sea and the German Federal Ministry for Economic Cooperation and Development.

He stressed that with the negative news climate and increasing public distrust in the media, it was important for journalists to focus on solutions and positive behaviour to mitigate the impact of climate change.

The message we’re giving on climate change is that it’s big problem which is often overwhelming and frightening to the audience. But we have to begin to think beyond those messages and focus on the solutions.

“There is a great opportunity at conferences like this to educate yourself on the science behind the issues and get you thinking about how to emphasise the positive—the technology, innovations and solutions that address climate change and will get us to where we need to be,” he said. 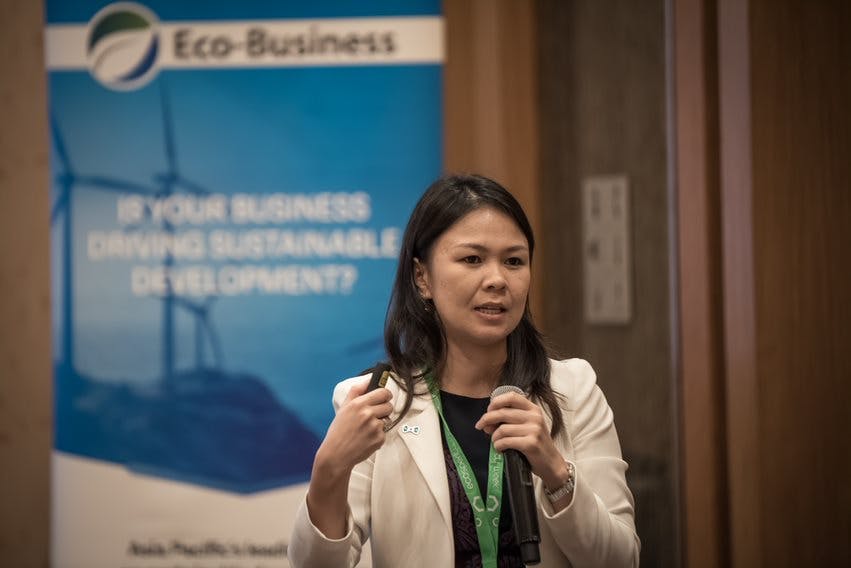 Jessica Cheam, managing editor at Eco-Business, leads a training session on how journalists in Asia can write stories on climate change and sustainability that engage different audiences across a range of media. Image: Eco-Business

According to Donny Superman, a documentary producer and broadcast journalist from Indonesia, the media training and event coverage opened his eyes to how the story of climate change encompassed issues he once thought as isolated, such as plastic waste and water management.

“Climate change is not really interesting to the average viewer, but this programme has opened my mind to the many ways in which this issue can be made sexier and how it connects to many other issues that I have reported on before,” he said. 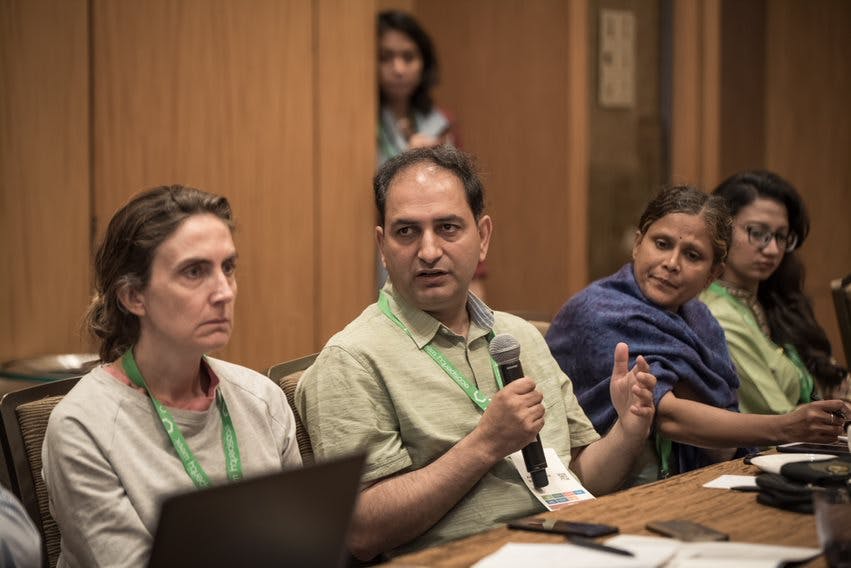 During the Innovate4Climate Media Fellowship, journalists bounced story ideas based on the state of sustainable development in their own country.

Reporting on the most dangerous beat in Asia

Although environmental problems such as air pollution, plastic waste and global warming are growing ever more visible and climate change has emerged as the biggest story of the century, journalists in Asia and beyond face major challenges in reporting on these issues, including threats to their jobs and lives.

According to research, environmental reporting is one of the most dangerous beats in journalism, with 40 reporters around the world perishing between 2005 and 2016 because of their work on often sensitive and controversial environmental issues—more than were killed covering the United States-led war in Afghanistan.

Purple Romero, a multimedia journalist from the Philippines with a decade of environmental reporting experience, brought up how local reporters can be shot dead for shedding light on sensitive issues that often involve influential businesses or criminal activities, such as illegal logging and human rights abuses. 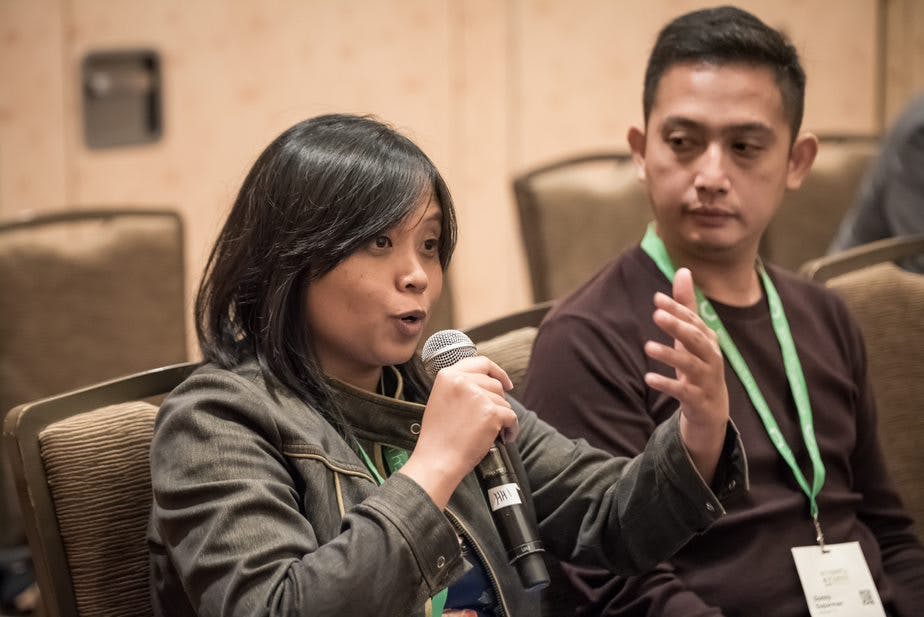 Purple Romero, an environmental reporter from the Philippines, talks about the dangers faced by environmental journalists in her country, Southeast Asia’s most dangerous for the media. Image: Eco-Business

“In the region, I think being an environmental journalist is the biggest job hazard ever, and in some countries you could be killed, like in the Philippines and Brazil,” said Jessica Cheam, managing editor of Eco-Business. “I think knowing how to push the boundaries is very important. There are certain ways you can communicate your stories that will make them resonate to all stakeholders and push an issue in a neutral and balanced manner.”

“The question is how can we report on these important topics in a way that is balanced and not aggressive or offensive?” Cheam added.

Other than the dangers of reporting on the environment, research shows that environmental journalists also face obstacles such as insufficient time for field reporting, inadequate training in climate science, and a lack of support from their newsrooms. 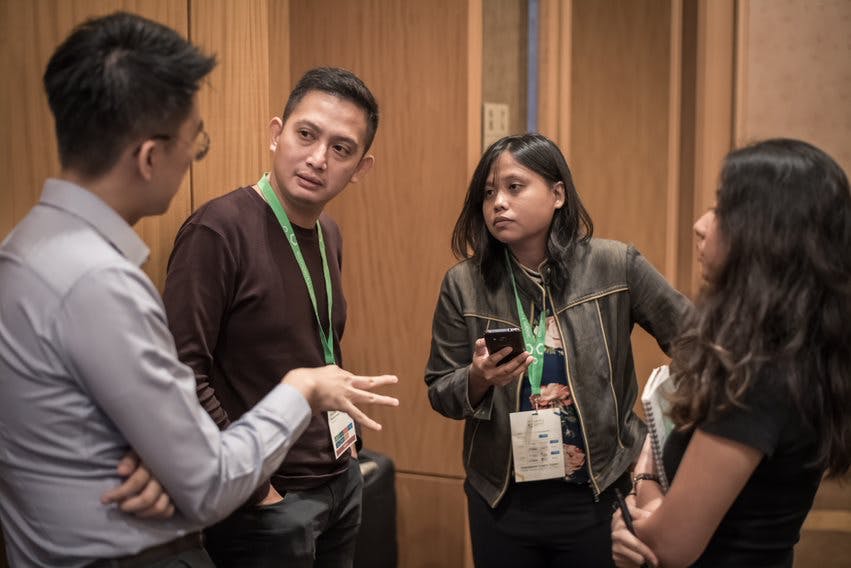 Journalists from across Asia spent a week covering sustainability events in Singapore and sharing their own experiences reporting on sustainable development in the region. Image: Eco-Business

“Journalists need the opportunity to learn about the finance, investments, technology and opportunities that tell a more positive story and encourage climate action across all stakeholders,” said Hobbs. “Media training sessions like this are an attempt to educate journalists on the nuts and bolts so they can better translate the issue to the public.”

James Zhang, editor at Singapore-based, Chinese-language magazine Fortune Times, said, “I’ve picked up new reporting skills related to data journalism and how this can be effectively used on our news site. Other than being a very global platform, this fellowship has taught me how to better use the resources available in my work.”

“It has also been a great opportunity to meet journalists and experts from different parts of the world who have different perspectives on the same climate issue,” Zhang added. “Climate change does not have a boundary so it is important to know what other media professionals in other countries think. A wider perspective will definitely improve my reporting on such a global issue.”

Ideas to tackle the existential threat of global warming

Suggestions by delegates at the World Bank's recent Innovate4Climate event in Singapore included: Supporting developing countries in their efforts to conserve the forests, and launching more incubators for climate-friendly solutions.
Ideas to tackle the existential threat of global warming

The time is ripe for carbon pricing in Southeast Asia

The time is running out to turn the tide on climate change. Carbon pricing could drive the transition to a low-carbon economy, but how can governments in developing Asia do this most effectively to ensure that economic growth and climate protection go hand in hand?
The time is ripe for carbon pricing in Southeast Asia

The world's largest greenhouse gas emitter has made significant progress in cutting emissions at home, but continues to be the biggest funder of coal projects abroad, reports Purple Romero from the Innovate4Climate event in Singapore last week.
China can't wean itself off overseas coal

Why emerging Asia is the hub of climate-smart urban development