Singapore state investment firm Temasek announced that it has accelerated investments towards sustainability solutions and raised its internal carbon price. But green groups remain concerned about the company’s continued support for carbon-intensive sectors.

“Sustainability is at the core of everything we do,” stressed Singapore-owned investment firm Temasek throughout its 2022 financial review, which took place on Tuesday.

The company has achieved carbon neutrality for the third year running, it announced in a presentation made by Lim Ming Pey, managing director of the Strategy office. The last four years saw a marked decrease in overall carbon intensity — from 49.6 tonnes of carbon dioxide equivalent (tCO2e) per employee in 2018 to 7.4 tCO2e in 2022.

The bulk of this drop was attributed to Covid-related restrictions, which led to a sharp decline in indirect emission sources such as business travel and employee commute, said Temasek. While the company expects to see an upward trend in these emissions as the world opens up for travel again, it said it would continue to scrutinise the need for business travel closely, and leverage technology such as teleconferencing.

While Temasek appears to have made significant environmental strides as an institution, questions have been raised about the US$286 billion firm’s portfolio.

“For upcoming investments, will Temasek be taking a harder stance against investing in carbon-intensive sectors?” asked one participant at Temasek’s recent financial review media conference.

Temasek is the single biggest shareholder in Sembcorp Marine, one of the world’s largest builders of offshore oil and gas rigs. Sembcorp Marine recently completed the construction of an oil facility for Shell in the Gulf of Mexico, where production is expected to reach 100,000 barrels of oil equivalent per day at its peak. Production will begin in the fourth quarter of 2022.

Temasek also owns about 55 per cent of Singapore Airlines (SIA), a global carrier with over 140 aircraft in its fleet, according to Planespotters. While SIA is piloting programmes to transition to sustainable aviation fuel (SAF), these are still blended with traditional fossil fuels.

For the 2022 financial year, Temasek’s total portfolio emissions stood at 26 million tonnes of CO2 equivalent — roughly the same amount of emissions generated by 5 million American households in a year. The company is seeking to halve its portfolio emissions by 2030, and reach net zero by 2050.

At the media conference, Temasek’s head of strategic development Russell Tham said that sustainability is a journey, and that Temasek “does not have a harder stance” with regards to its investments in carbon emitters.

Temasek has developed a multipronged and multi-year strategy, and is executing it in a “fairly agile manner”, he said.

“We take it as it comes, but our commitment (to sustainability) is resolute,” he added.

“If a company has been valued as a high-carbon emitter and we can work to transition it, it could lead to a significant re-rating of those companies,” Sipahimalani said.

Temasek has in recent years accelerated its investments in sustainability. In 2021, it partnered with BlackRock, the world’s largest asset manager, to invest in companies working on decarbonisation solutions. These include early-stage startups targeting renewable grid solutions, battery storage, and electric vehicle technologies.

A ‘balanced strategy’ towards net-zero

“We need to keep in mind that there are industries that will need to undergo transition. Oil companies, for example, have fantastic infrastructure that have potential for deployment for many different functions, including carbon capture and storage,” Dr Broadstock said.

Representatives from the green community were more sceptical.

“How can Temasek achieve the (net-zero) target while its emission portfolio increased by 36 per cent from 2011 to 2021?” said Tata Mustaya, regional climate campaigner for conservation group Greenpeace Southeast Asia.

“If Temasek invests in green sectors but at the same time continues to be one of the biggest investors in the fossil fuels industry, it is potentially greenwashing. And greenwashing won’t be able to stop the climate crisis,” Mustaya said. 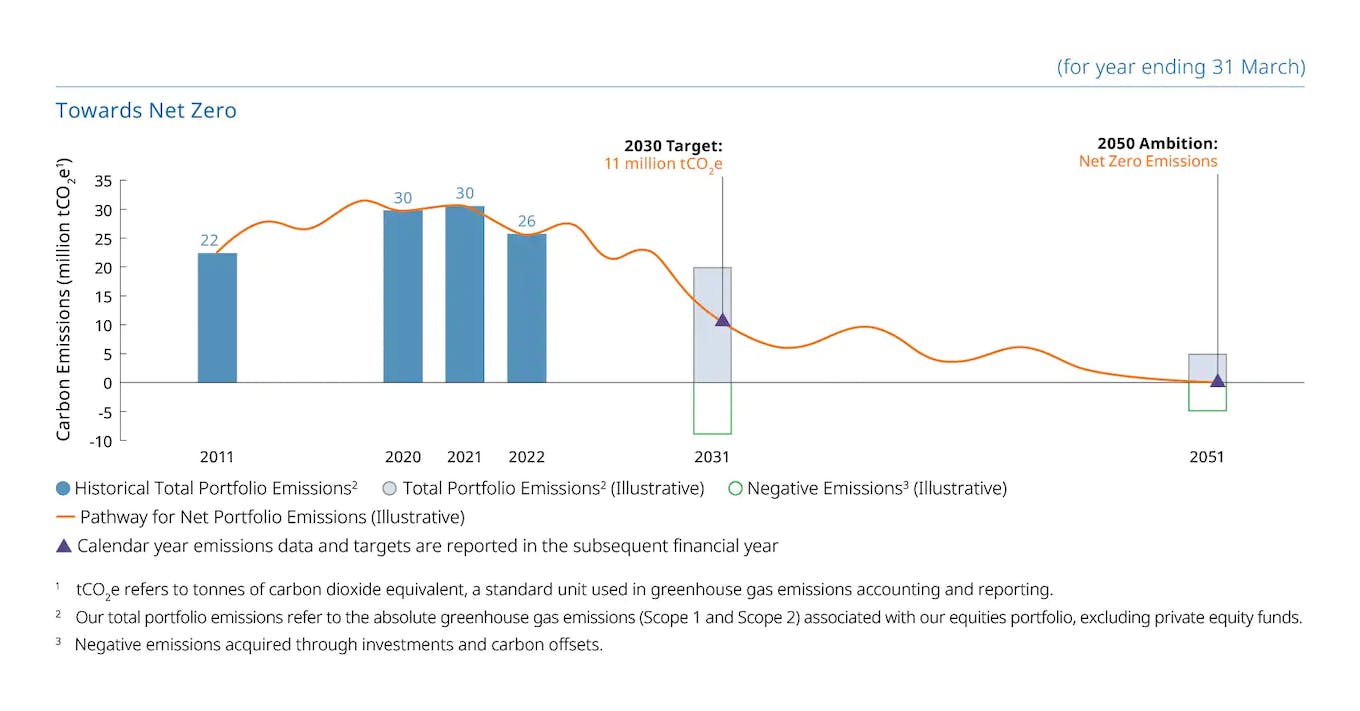 Temasek also announced in its financial review that it will raise its internal carbon price from US$42 tonnes of carbon dioxide equivalent (tCO2e) to US$50/tCO2e this year, and expects to increase the price to US$100 by the end of the decade.

A spokesperson from Temasek said that the company adopts a shadow price mechanism. This approach adds a hypothetical fee of US$50/tCO2e to new projects, allowing Temasek to add the potential impact of a company’s greenhouse gas emissions to its investment value. However, a shadow price does not generate actual financial flows.

According to the spokesperson, the figure of $100/tCO2e was calculated as an average of leading agencies’ forecasts for carbon prices aligned to net-zero scenarios. These include the International Energy Agency and research consortium Inevitable Policy Response.

“We will continue to review and update our internal carbon price so that it remains consistent with relevant net-zero scenarios and leading market theory and practice,” the spokesperson added.

According to CDP, an environmental disclosure non-profit, the global median internal carbon price among surveyed companies in 2020 was about $25/tCO2e, suggesting that Temasek is ahead of its global counterparts in imposing a higher fee on carbon.

“That Temasek is setting a price higher than Singapore’s carbon tax is significant,” said Dr Broadstock.

“It says that Temasek has a very clear ambition to make sure that the environmental impacts of its business are valued highly,” he said.

“If Temasek can demonstrate that it is willing to use this internal carbon price to discipline its poorly performing portfolio companies — meaning businesses which are no longer viable once you impute the shadow fee of $50 — then it holds promise as a useful tool,” he said. This “discipline” could include divestment, shareholder lobbying or other means, Seah added.

“Ultimately the proof will be in the pudding as to whether Temasek’s claims will drive concrete reductions in emissions,” said Seah.