The more coal dominates the energy mix, the more positively Southeast Asia's media will cover it—except in the Philippines

The more coal-dependent a country is, the more pro-coal its news reporting is—this was the trend among five Southeast Asian countries surveyed by Climate Tracker. Why is the Philippines the outlier?

Media coverage of coal in countries across Southeast Asia correlates closely with how much the energy mix and economy relies on the fossil fuel, a report by an organisation of climate journalists has found.

The more coal is in the energy mix, the more likely the press will cover it favourably, according to the study by Climate Tracker and Stanley Center for Peace and Security.

However, the Philippines stood out for being the only country going against this trend.

Titled Coal and Renewable energy reporting in Southeast Asia: A multi-country comparative analysis, it surveyed over 2,700 energy-themed articles that were published from January 2019 to August 2020 and interviewed 99 media practitioners that reported on it in the Philippines, Malaysia, Thailand, Vietnam, and Indonesia.

Evaluating the positivity of coal press coverage versus the coal capacity of the country, researchers calculated that 44 per cent of the Philippines’ electricity relied on the fossil fuel, but only 38 per cent of the 167 coal-themed articles depicted it in a positive light.

By comparison, coal-exporting Indonesia registered the most coal capacity among the five countries at 62 per cent, and 67 per cent of articles written about it were favourable. Press articles on coal in Indonesia often cite technological developments such as ultra-supercritical boilers that claim to make dirty energy “clean.”

Hover over chart below to see coal coverage versus coal dependency in Malaysia, Vietnam, the Philippines, Indonesia, and Thailand:

On the other end of the spectrum, only 18 per cent of Thailand’s energy mix comes from coal, resulting in the lowest proportion of pro-coal news articles, at 19 per cent.

In Malaysia, 44 per cent of its energy is sourced from coal, and 46 per cent of its coal stories were positive, while Vietnam followed the same trend with coal dependency at 33 per cent, and pro-coal articles at 34 per cent.

The Philippines’ strong civic movement against coal and the influence of the nation’s anti-coal church leaders were the main factors that made the country an outlier, the report found.

Prominent clean energy advocate Gerry Arances from the Center for Energy, Ecology and Development was quoted in almost half of the 103 articles that framed coal negatively.

The Catholic church, which claims over 86 per cent of the population as followers, has taken a strong stand against coal in the media, led by Bishop Gerardo Alminaza fighting coal plant development in the province of Negros Occidental in the Visayas region and Catholic priest Edu Gariguez opposing mining in Mindoro, off the coast of Luzon.

Hoang, lead researcher of the report, said that nowhere else in the region did they find the church, or any religious institution, extensively quoted in a significant number of articles.

“This is consistent with data from other surveys which shows that the Philippines is the most religiously monolithic country among those examined, giving the church the power to convince others to side with its position, which in this case is its opposition to coal,” said Hoang, who was also previously the Southeast Asia manager of Climate Tracker. 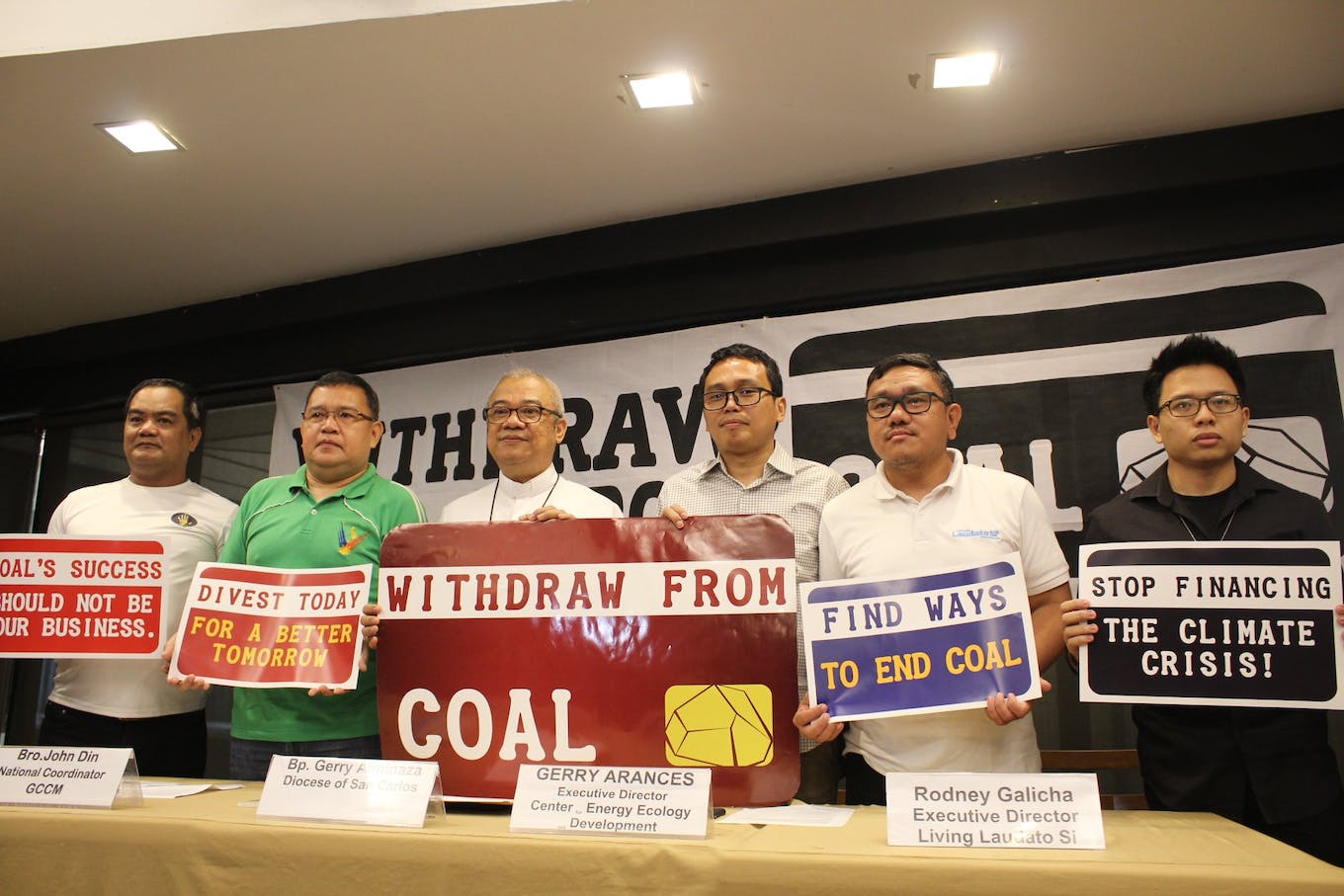 Church officials led by Bishop Gerardo Alminaza (third from left) hold a press conference with Gerry Arances of the Center for Energy, Ecology and Development (third from right) to launch the “Withdraw from Coal” campaign spearheaded by the church, civil society, and people’s organisations urging Philippine banks to divest from coal. Image: Living Laudato Si

Could limits to press freedom be stifling coal reporting?

The Philippines’ anti-coal stance in the media is perhaps surprising in a country with low levels of press freedom. The archipelago placed 136th in the 2020’s World Press Freedom index by non-profit group Reporters Without Borders, falling two places on last year. However, the Philippines has a more liberal press than Thailand and Vietnam.

Vietnam, a single-party Communist country with state-owned entities dominating the energy and media sectors, ranks 175th in press freedom rankings, but has taken a relatively hard line against coal, partly thanks to the work of sustainable energy non-profit Green Innovation and Development Centre (GreenID).

GreenID has been instrumetal in convincing the government to reduce some of its coal production targets,  and was quoted in more than half of the 42 stories that raised environmental concerns about coal. 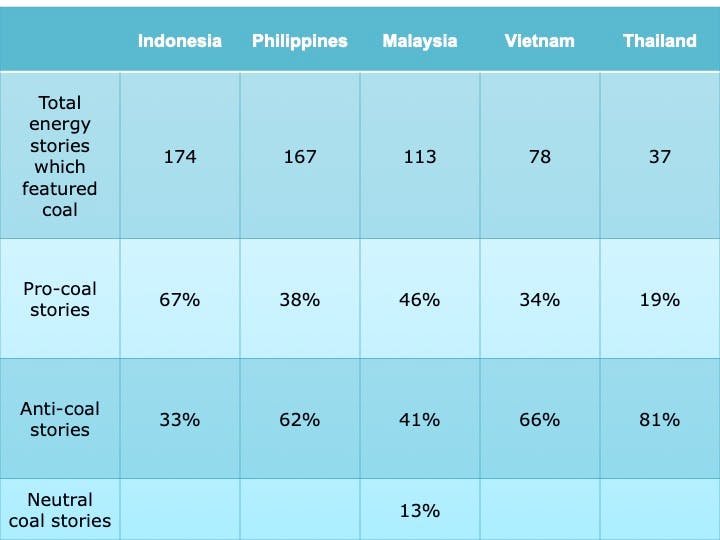 The chart shows that Indonesia has the most pro-coal stories while Thailand has the least. Malaysia has almost an equal number of positive and negative coal stories, but has 15 neutral coal stories, where articles have no position but merely track the increase and decrease of coal prices. Image: Eco-Business, Source: Climate Tracker

Malaysia’s media is the freest of the featured countries in the study, but its portrayal of coal is split almost evenly; 46 per cent of articles frame the fossil fuel positively and 41 per cent frame it negatively. Thirteen per cent of coverage was rated as neutral, simply tracking the rise and fall of coal prices.

Kuala Lumpur-based news outlets that covered coal favourably depicted it as an indispensable part of the country’s economy and, as in Indonesia, featured technology that could limit pollution from coal-fired plants. However, three-quarters of articles supporting coal development did so by exclusively quoting business representatives and industry insiders—showing a lack of diversity in viewpoint, the research noted.

Leading media organisations that criticised coal either pointed out its environmental impacts or depicted a particular project, such as the 1,000-megawatt TADMAX power plant in Selangor. Nearly half of these articles were opinion pieces from newspapers’ editorial staff or guest columnists. MalaysiaKini, an independent outlet founded to counter the dominance of large media corporations, also opposed coal for its harmful effects to health and the environment.

Indonesia has the freest media besides Malaysia, but its media frame coal the most positively, the analysis found.

Some 67 per cent of coal articles in Indonesia highlighted coal’s role in national development — far more than any other country the study. When environmental concerns were covered, they were often balanced with commentary on the economic contribution of the country’s mining sector.

Even when the local media discussed the controversial coal mining omnibus law, which has been criticised for benefitting only the mining industry, the blame was directed at the undemocratic process by which the law was passed, rather than the environmental and health impacts of coal mining itself.

Thailand ranked second to the last in press freedom among the five countries, but coal was not a popular topic in Thai media, being covered in only 37 articles—the fewest out of the countries analysed.