Pineapple leaves, an agricultural waste product, are turned into a leather alternative while algae from toxic blooms is used for the soles of the sneakers.

In a bid to create the world’s most sustainable shoe, a New Zealand start-up has turned pineapple leaves and algae into raw materials for eco-friendly footwear.

Pineapple leaves, which are usually burned as waste products in the Philippines from where they are sourced, are transformed into a replacement for animal leather, said Jeremy Bank, founder of YY Nation, the maker of the shoes.

Filipino farmers in pineapple plantations extract fibers from pineapple husks before they are converted into threads, which undergo an industrial process that transforms them into the material to form part of the outer covering of the shoes. Thirty leaves are needed to make just under two pairs of shoes.

The Philippines, the second-largest pineapple grower globally, produced about 2.6 million metric tonnes of the fruit in 2017, but five per cent of the total production was agricultural waste like pineapple leaves.

Algae, which is used to create the soles of the shoes, is collected from the waterways of Lake Erie in the United States. Harmful algal blooms are a yearly problem in the lake. Caused by runoff pollution from surrounding farms, they may pollute drinking water, kill aquatic life and hurt the local tourism economy.

Apart from making use of renewable materials, our shoes also support the growth of new micro industries providing good wages and a source of income for the local population.

The algal soles are also made with castor oil, which is a bio-oil that reduces dependency on petroleum and uses less natural resources.

Customers can customise the outer sole of the shoes, choosing either recycled rubber combined with algae, or sugarcane.

Customers may choose either bamboo from China or merino wool from New Zealand for the material covering the shoe. Bamboo is a natural alternative to traditional synthetic materials, said Bank, as it produces 30 per cent more oxygen than trees, absorbing more carbon dioxide and greenhouse gases. 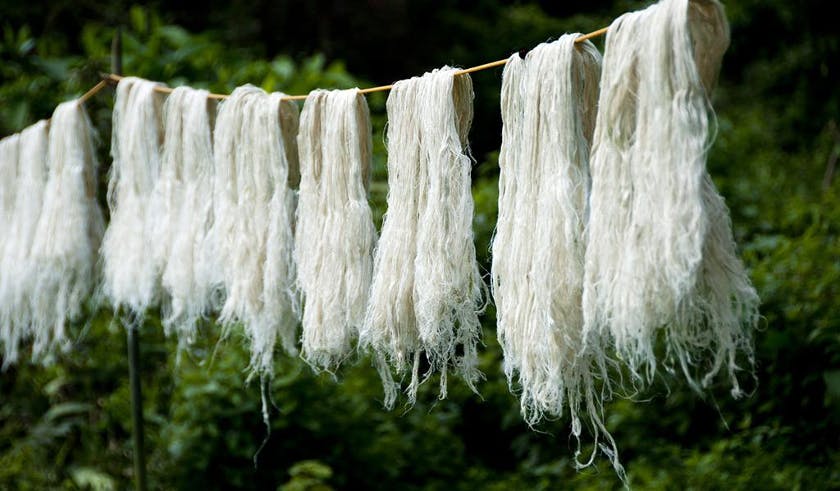 Pineapple fibres hang out to dry before they are made into leather replacement for the shoes. Image: YY Nation

“The raw materials are sourced all around the world, but the shoes are designed in New Zealand. Apart from making use of renewable materials, our shoes also support the growth of new micro industries providing good wages and a source of income for the local population,” Bank told Eco-Business.

“Contributing to the global clean-up of our land, oceans and waterways, with every step we take, we are aiming to be the most sustainable shoe in the world.”

Bank, whose father had shoe shop in Wellington, said he realised early on that the footwear industry created a lot of waste.

But it was a family beach holiday in Maui, Hawaii in 2018, where he and his daughter noticed plastic waste along with an old shoe washing up on the shore, that sparked the idea for YY Nation. The name of the company refers to the two “whys” Bank asked himself. “Why is this happening? Why can’t I do more about it?”

Initial designs for the shoes were created in 2018, with testing of sustainable materials done a year later. Final prototypes were completed in March this year. Even with the outbreak of Covid-19, Bank and his team pushed on, citing how their shoes would now “be more critical to provide sustainable options for people because we can see how quickly things can change”.

The company launched a crowdfunding campaign on 16 September for customers to pre-purchase a pair of shoes before they are manufactured and enable the group to get initial funding for the first production.

The company is crowdfunding on another platform, and expects to deliver pre-orders to customers by the beginning of next year.