The February military coup in Myanmar has cast doubt on the future of environmental protection efforts in the Southeast Asian country.

It started with the water changing colour. Soon after that, the fish began to die. When the villagers bathed, they became itchy and covered in sores like an allergic reaction. Later, women and farm animals in the area started having miscarriages at an unusually high rate.

“We were very shocked,” said environmental activist Saw Tha Phoe, who is currently in hiding, facing criminal charges. “We told the government it needs to take action, this is a very serious case, but the government refused to listen.”

Instead of investigating the nearby coal-powered cement plant that the people of Kayin state in Myanmar believed to be responsible for the water contamination, the government went after Tha Phoe.

While he was in a meeting out of town in March 2020, 10 police officers barged into his home in Hpa-an township, attempting to seize his nephew in a case of mistaken identity. The raid was the culmination of a years-long struggle between the activists and the government.

“In an interview with local media, the chief minister [of Kayin state] was very clear. She says that the development of Kayin state is delayed because of me. They made me into a villain,” Tha Phoe said.

That chief minister, like so many other officials from the National League for Democracy, is no longer in power following a military coup on 1 Feb.

Activists and environmental lawyers expressed disappointment with the limited progress made on environmental issues in the five years in which the NLD held power, but said they fear the situation will deteriorate even further under a military dictatorship.

It was a military-owned cement factory that polluted the villages in Kayin state, which the NLD government allowed to go forward despite local resistance and no environmental impact assessment (EIA), as required by law.

While he said he expects things will be worse under the new military regime, Tha Phoe noted that even the NLD was difficult to work with on environmental issues. He said he approached the previous government with proposals about clean-energy projects like solar power but was ignored.

Next, he wrote a letter to the state government offering to do scientific assessments together. “We are trying to test the air quality, soil quality, water quality. Do everything together so the people trust the information. It would be good for transparency,” he said. Instead, the government responded with threats. “They said if anybody tries to do their own research, they will be charged,” he said.

“They should sue the company, but they sue me and make threats to other people to force their silence,” he said.

Tha Phoe’s story is far from unusual in Myanmar, where it’s exceedingly difficult for villagers and environmental activists to hold companies accountable, but easy to jail critics.

A local environmental lawyer, “Y.S.,” said there was hope the NLD would change things after taking power in 2015, including reforming the Environmental Conservation Law, which was passed under the military-proxy Union Solidarity and Development Party in 2012.

Y.S. spoke to Mongabay before the coup, later asking to be made anonymous due to the increased risk now that the military has taken control, as did three other environmental experts working inside and outside of Myanmar interviewed for this piece.

All have been randomly assigned pseudonymous initials to avoid reprisals against themselves or the organizations they represent.

“In the last five years, under the NLD, they didn’t do anything about it,” Y.S. said, calling for the law to be amended to give civil society organizations and individuals the right to “take action against businesses and any other illegal activity that can cause environmental pollution and degradation.”

Y.S. also criticized the 2016 Environmental Conservation Policy passed by the NLD as ultimately toothless. “We can’t reference a policy in court. They’re just guidelines that the government commits to, but it is not a law. We need a law and we need a good law,” he said.

Y.S. said he was disappointed that Myanmar’s brief experiment with democracy didn’t translate to more environmental protection. “It’s still happening under the democratic government. Things have not really changed,” he said.

While Tha Phoe came up against a military-connected company, another environmental lawyer, G.J., said the NLD government didn’t take action against private companies either.

“Sometimes the owner is from a military background, sometimes they are from a crony background. But we didn’t see very obviously special treatment for the military-owned companies. Most mining companies are doing a lot of harm and causing a lot of pollution,” G.J. said, adding that none are being held accountable.

A third legal expert, F.I., said the NLD may have been afraid of being seen as stalling development.

“It’s simply a government choice not to use the power it has. Perhaps it comes from the idea that Myanmar needs mining companies for development, yet without accountability, the harms to communities and the environment far exceed revenues,” F.I. said, also speaking before the coup.

F.I. said the NLD government consistently failed to take action against damaging companies, for no clear reason, adding that the legal framework was already “perfectly adequate” for the government to hold companies accountable. “The Ministry of Natural Resources and Environmental Conservation has the power to bring administrative fines and prosecutions, but it chooses not to,” F.I. said. 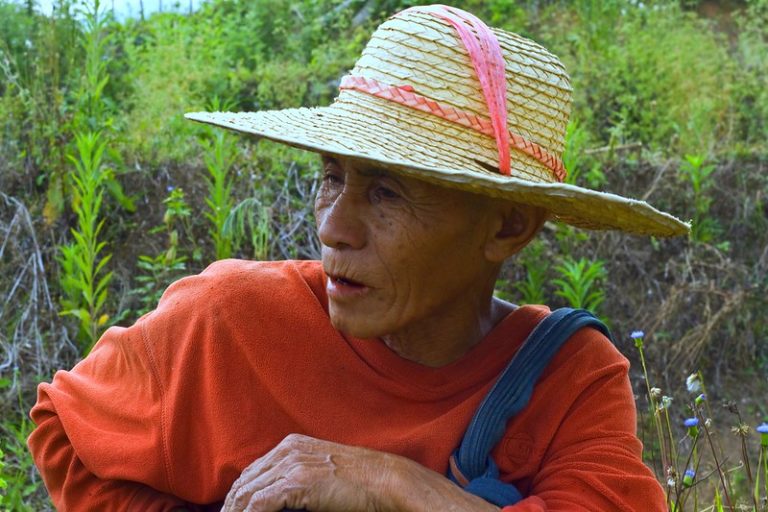 Akha farmer in Shan State, Myanmar. Upland small-holder farmers, especially those who depend on rain to grow crops, are particularly vulnerable to the impacts of climate change. Image: Isabel Esterman/Mongabay.

One of the key problems under the NLD government was a broken EIA procedure. According to law, all projects are required to complete a full EIA. Even if companies simply need to renew their license or want to change their original proposal, they are meant to submit a new EIA. But the reality was different.

Vicky Bowman, director of the Myanmar Centre for Responsible Business, said her organization has seen EIA reports that “look more like press releases for the project than an impartial professional assessment of impacts.”

“Myanmar EIA consultants have told us that they are also pressured by their clients to remove references to negative impacts,” she said.

She said the Environmental Conservation Department refused to prioritize review of high-risk projects, instead ordering all preexisting investments to submit an “environmental compliance audit” at once, which led to a massive backlog of projects that it couldn’t work through. According to Bowman, this “overwhelmed the limited in-country expertise” and led to “a huge pile of paper on ECD’s desk, much of it worthless cut and paste text, which they are still struggling to process.”

Bowman said some projects should not even reach a point where they undergo an EIA. “The best EIA in the world can’t fix a poorly considered and located project whose potential adverse impacts are so severe that nothing could adequately mitigate them. Some of the major dam projects like Mong Ton and Myitsone fall into this category. These projects should be screened out by the government at an early stage,” she said.

Soon after seizing power, Senior General Min Aung Hlaing floated the idea of “generating low-cost hydropower,” leading many to believe that the junta may seek to restart suspended projects like the environmentally devastating Myitsone dam.

Bowman defended the Environmental Conservation Department as “a new department which is slowly building up its experience.” But with the government in the hands of the military, that limited progress may have been lost. 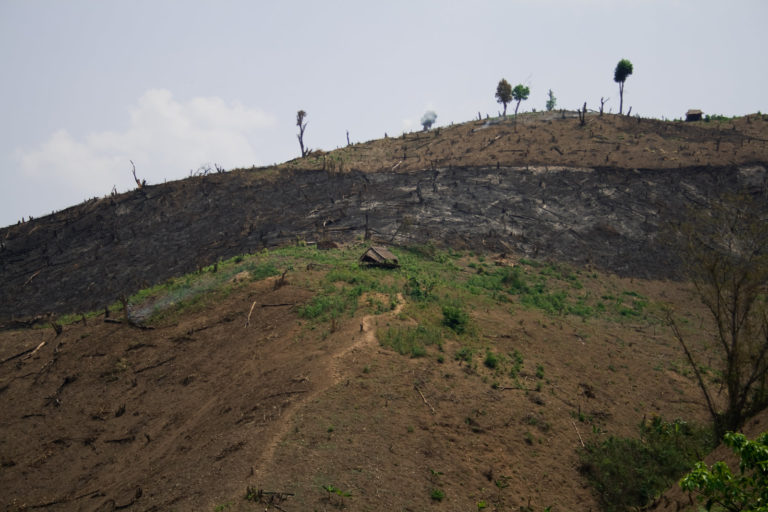 Deforestation near Mong-La, Myanmar. Between 1990 and 2010, during the previous period of direct military rule, Myanmar lost 19 per cent of its forest. Image: Isabel Esterman/Mongabay.

While most observers were critical of the NLD’s lack of progress on environmental issues while in power, there was widespread agreement that the situation will likely worsen considerably under military rule.

R.G., an environmental lawyer with extensive experience in the region, said the coup “has been a disaster for the environment and climate change as the military is a corrupt and rent-seeking criminal organization.” R.G. said he expects the new regime will “only be interested in maximizing personal benefit” and “resource exploitation.”

He also said that given the coup was “unconstitutional,” any “permits and approvals issued by the coup are illegal.” While the regime may lack legal legitimacy, it has already moved to replace and reappoint judges, which could pose another problem for environmental protection.

The third lawyer interviewed, F.I., gave a similar assessment. “The junta is not a legitimate government — it simply does not have the right to award [environmental compliance certificates], implement laws, or grant licenses,” F.I. said. Furthermore, the military “has a long history of misappropriating these resources to fund its human rights abuses.”

F.I. said the already broken EIA process will also likely suffer under the new regime, adding it requires “public participation” and for communities to be able to openly object to projects.

“This is not possible under a junta with no respect for human rights, no rule of law, and new laws which mean that any opposition to an EIA process could be seen as ‘hindering’ a public servant, which the junta has made illegal,” F.I. said.

The regional expert, R.G., said he hopes that given the junta’s illegitimacy, the World Bank, countries in the region and other international institutions won’t engage with the military.

R.G. said even China may hesitate to engage with the military, given the possibility that the NLD could return to power. “If they betray the NLD and the Myanmar community then all their projects will be suspended or cancelled after democracy is restored.”

“Until the military goes there is no hope for Myanmar’s environment,” R.G. added.