Cracking down on illegal trafficking and logging: how environmentalists are protecting biodiversity in the Philippines

In celebration of environment month in the Philippines, Eco-Business asks local conservationists about the biggest challenges they face in preserving wildlife in one of the world’s richest ecosystems.

While recognised to be one of the most biodiverse countries in the world, the Philippines has animal and plant species which are the most threatened on Earth.

It is an international hub for illegal wildlife trafficking, with the market value of animals seized and damage to habitats incurred during poaching estimated at US$1 billion per year.

Several endemic species in the country have only four per cent of their natural forest habitat remaining. Although most forest destruction has been carried out legally by logging companies with close links to government officials, it is also blamed on farmers who make use of slash-and-burn methods, or kaingin, to clear forests.

Forest rangers, sea wardens and wildlife law enforcers all have something in common—they simply love the environment, and they act as stewards of the Earth.

At sea, the archipelago’s marine protected areas are endangered by overfishing and illegal fishing practices as well as the worsening impacts of climate change.

The daunting task of conserving the country’s animal, forest and marine habitat is in the hands of wildlife law enforcers, forest rangers, marine protectors, some of whom do it voluntarily, with no pay.

To commemorate the environment month of June in the Philippines, Eco-Business spoke to some of the country’s brave and passionate wildlife defenders to tell their stories. 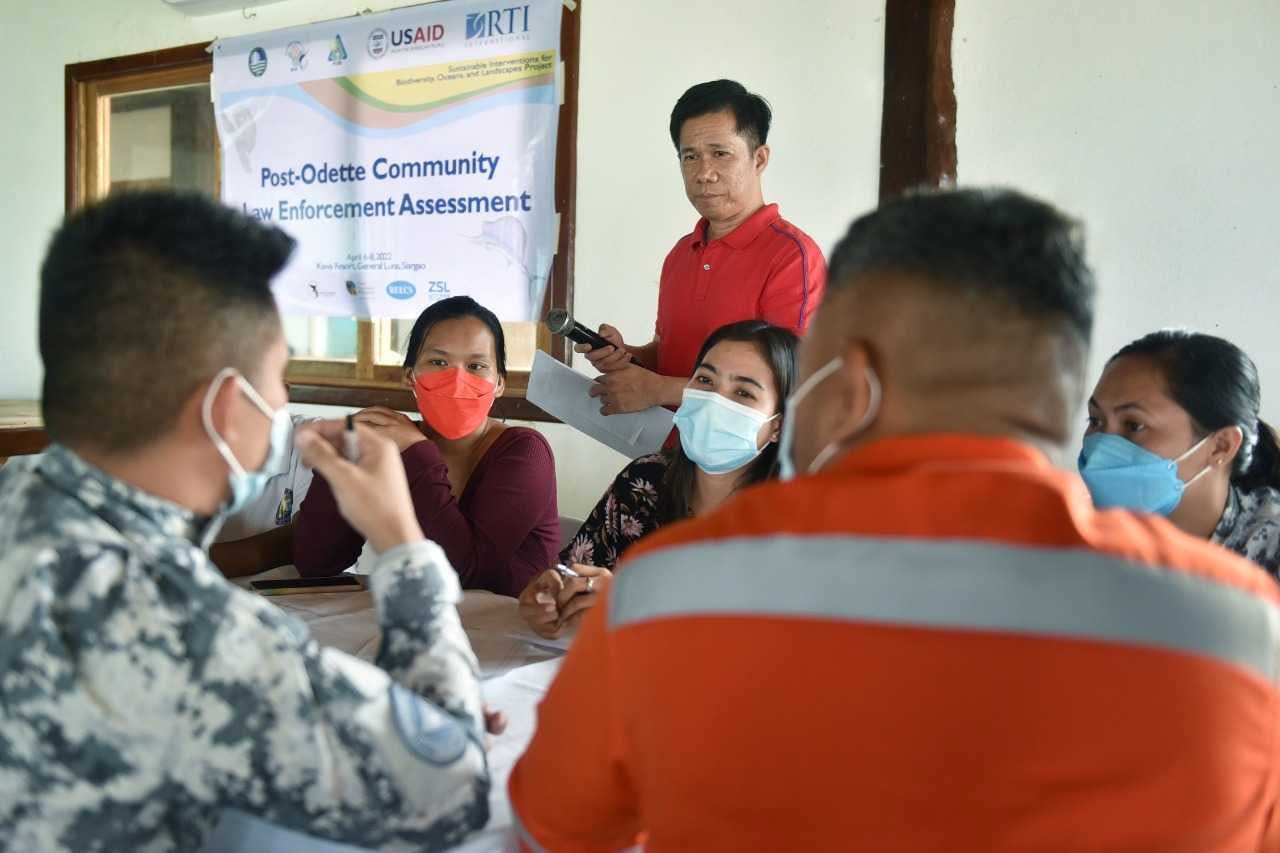 Wildlife enforcement expert Glenn Forbes in a meeting with military and police agents for a post-Typhoon Rai debriefing. Forbes spent 20 years as the programme director of environmental law enforcement of conservation non-profit Tanggol Kalikasan before his current job as enforcement specialist for policy, capacity and institution building under the Sustainable Initiatives for Biodiversity, Oceans, and Landscapes (SIBOL) of USAID. Image: Glenn Forbes

One of the biggest challenges of a wildlife enforcement officer’s job is having to cut through organised wildlife trafficking by local and foreign networks, said Glenn Forbes, enforcement specialist for USAID’s Sustainable Interventions for Biodiversity, Oceans, and Landscapes project.

Forbes cited how Chinese traffickers would receive from their local contacts sacks of sharks’ fins, seahorses, pangolin meat and scales, endangered fish like Napoleon wrasse, giant clam shells, and marine turtles. The value of confiscated wildlife in Palawan alone is estimated to have been up to US$38 million in the last three years, he added.

“Chinese traffickers belong to strong networks and are protected by their highly-connected members, so they are not easily caught,” Forbes told Eco-Business.

Transactions between traffickers and locals have included an elaborate use of social media networks, courier services, digital banking and payment systems, and mobile communications in the past decade. The Covid-19 pandemic may have even caused a dramatic increase in trafficking due to the use of the internet and courier services, with wildlife and wildlife by-products concealed and mislabeled as ordinary goods, make it harder for the authorities to track, he added.

Unlike those in the uniformed service, environmental enforcers are not armed, which exposes them to more risks.

Forbes recalled how one of his teams got ambushed by traffickers in Isabela province in northern Luzon in 2009, with one of his men getting hit in the leg by shrapnel.

“Forest rangers, sea wardens and wildlife law enforcers all have something in common—they simply love the environment, and they act as stewards of the Earth. Many of them consider it part of themselves, a personal journey, of the undying will to preserve what we currently have for future generations,” said Forbes.

Emerson Sy, wildlife analyst of monitoring network Traffic, is not involved in law enforcement like Forbes, but he works with the police in their operations against illegal smuggling.

He has been doing research on wildlife species for two decades, gaining the expertise to identify endangered habitats and be knowledgeable about what jargon traffickers use when they are interrogated to describe how they conduct their illegal activities.

“Usually the police who do buy-bust operations do not know anything about the animals they seize. They need someone with the knowledge to verify if the captured items are indeed endangered species,” Sy told Eco-Business. “Suppliers also have a code for the trafficked species. You need to be able to talk to them using special terms in order to understand each other.”

While the the buyers of sea horses and reptiles are mostly hobbyists, those engaged in pangolin smuggling have darker intentions, and traders are usually armed.

Vast quantities of pangolins are smuggled abroad despite an international trade ban on them in 2017. They are in demand as luxury food and traditional Chinese medicine to help with ailments ranging from lactation difficulties to arthritis.

Pangolins grabbed news headlines at the start of the pandemic after researchers said that the pangolin could be an intermediary host for the novel coronavirus, putting increasing scrutiny on China and Vietnam’s consumption of pangolins and the massive illegal trade in the scaly mammals.

When threats to forests are local communities 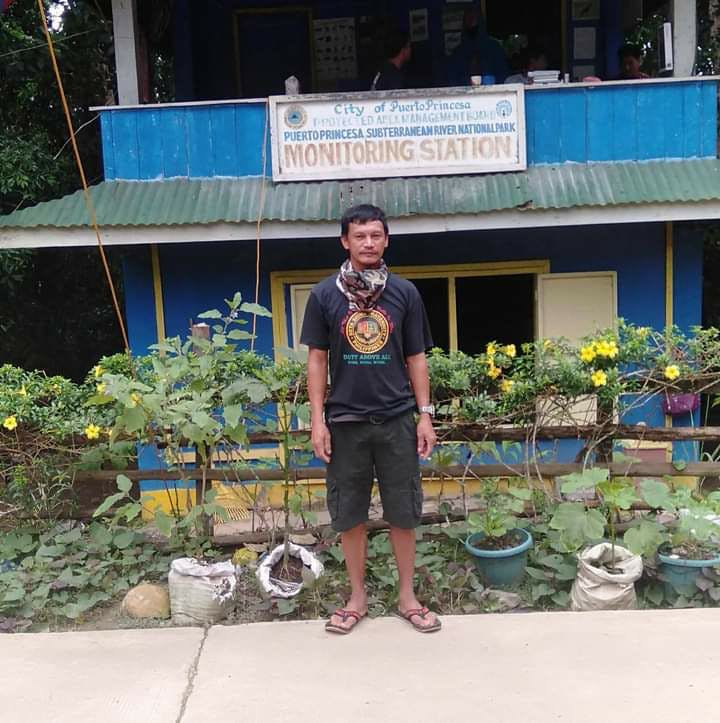 Ayeng Celino at the front of the ranger station of the Puerto Princesa Subterranean River National Park. Image: Ayeng Celino

During the height of the Covid-19 lockdowns in 2020, he recalled how his team was extra vigilant for illegal activities at the park, knowing that locals were strapped for cash because of jobs lost due to the pandemic.

The forest rangers had been monitoring a group of suspected illegal loggers for a month, and finally caught them in the act one evening cutting down Ipil trees, considered a critically endangered habitat. One of the loggers had a gun and shot Celino 12 times, but the veteran ranger miraculously survived the incident. The suspects turned out to be relatives of one of the park’s own staff.

Today, Celino is unable to rove around the park’s 22,000-hectare forest because of the injuries he sustained when he was shot. He works instead as a lifeguard in the park’s beach resort.

The park has the richest species in Puerto Princesa. If we lose the forest, my children and my grandchildren will no longer enjoy it. No matter the hardship I experienced, I will endure it again as long as the park is protected.

Despite being traumatised by the incident, Celino said he has no regrets doing his job.

“The park has the richest species in Puerto Princesa. If we lose the forest, my children and my grandchildren will no longer enjoy it. No matter the hardship I experienced, I will endure it again as long as the park is protected,” he told Eco-Business. 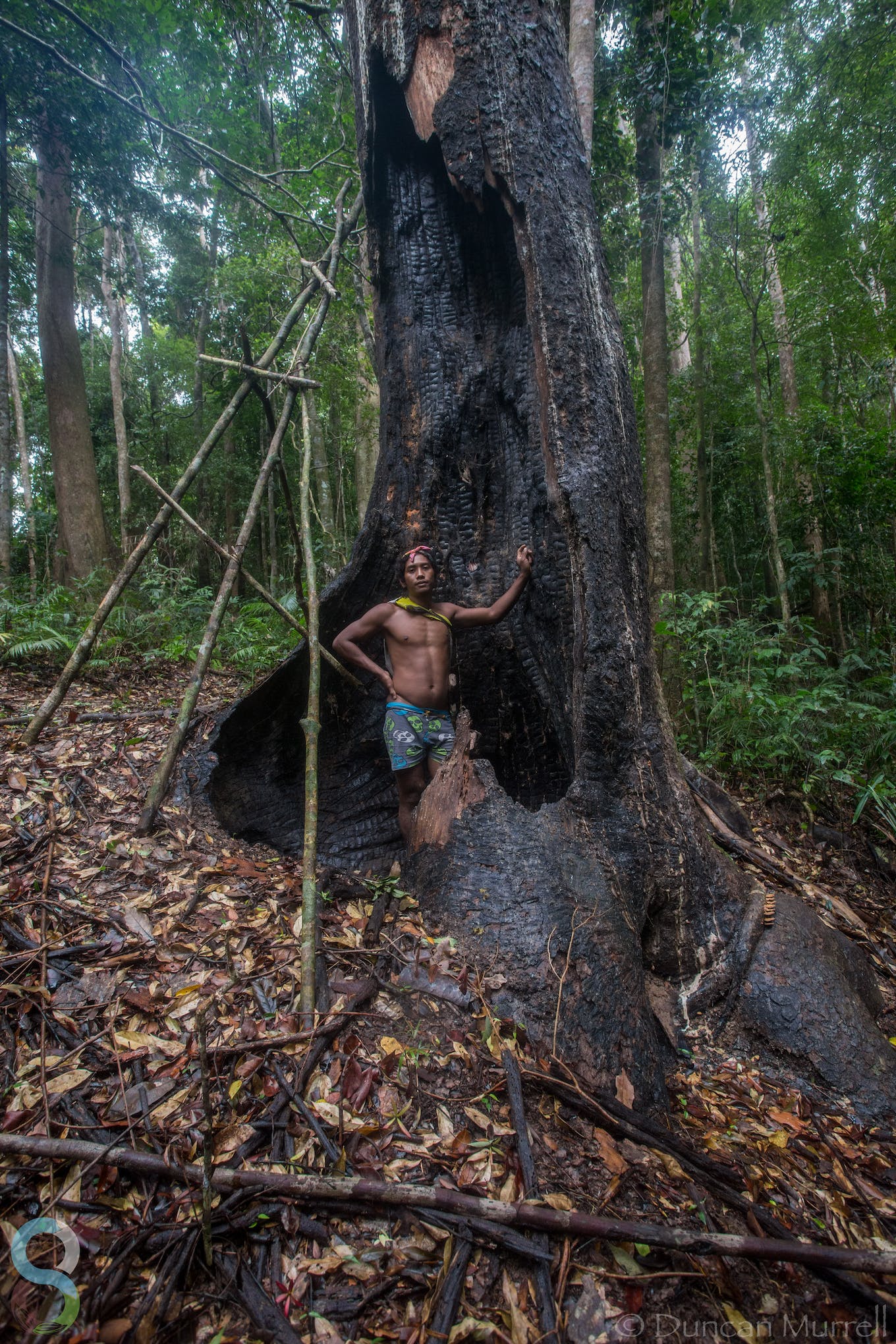 A member of the Batak Indigenous people stands against the Almaciga tree in the protected site of Cleopatra’s needle in Palawan. Image: Centre for Sustainability PH

Even before Covid restrictions stripped locals of their income and access to food, forests in the critical habitat of Cleopatra’s Needle in Puerto Princesa had already been prone to illegal activities.

Incidents range from serious slash-and-burn activities like locals arrested for clearing up to five hectares of forest, to the Batak Indigenous people of the community burning more forest than they are allowed.

Non-profit Centre for Sustainability PH has been training members of the Batak tribe to be wildlife enforcement volunteers to identify the offenders and report them to authorities.

“What is hard is that sometimes they are scared to write down the perpetrators because often times, the suspects are part of their community. They are worried that if their neighbours will be jailed, there will be chaos in the community,” Robert Angorin, lead of operations and senior field officer of Centre for Sustainability PH, told Eco-Business.

Battling economic progress for the sake of marine survival

Negros province in the Visayas island group is known to have one of Asia’s most diverse marine life conservation areas, with its rich variety of large corals, groupers, surgeonfish, jacks, clownfish, anemones, and giant clams. It is also in its coastal waters that the country’s critically-endangered Irrawaddy dolphins are found. 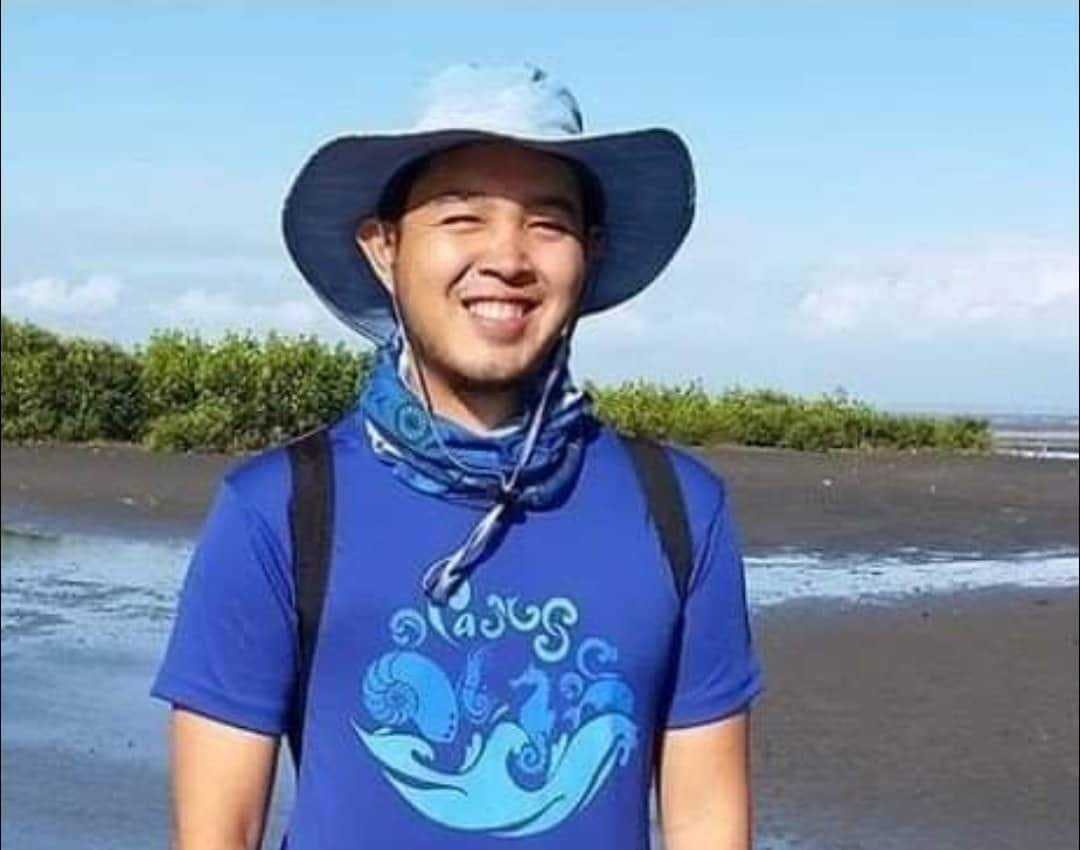 Mark de la Paz, marine biologist at University of St. La Salle, said it is always an “uphill battle” for conservationists like himself to convince people to prioritise marine life in Negros over the economic gains to be made from infrastructure projects.

“We are always at the losing end because we’re a third world country. People will always choose quick money over sustainability and we can’t blame them for that,” de la Paz told Eco-Business.

Part of De la Paz’s work is to allot marine protected areas in the province to prevent fishermen from getting their catch in those sites. His team tries to educate fisherfolk that overfishing will prevent the species from reproducing and will mean a smaller catch.

We are always at the losing end because we’re a third world country. People will always choose quick money over sustainability and we can’t blame them for that.

He also teaches ecosystem services like mangrove protection, which will not only allow more fish to thrive but also shields their homes from storms, saving them money from the inevitable rebuilding process that follows serious typhoons.

De la Paz said: “There are a lot of intangible benefits from conserving our marine life. People don’t immediately see the peso value in conservation, but what they don’t realise is that our culture depends so much on it.”