4 pressing environmental issues the next Philippine president should prioritise

Filipinos will troop to the polling booths in less than a month to elect a new leader. Whoever takes to the helm will have to walk a tightrope balancing environmental issues, an ailing economy and mass unemployment.

Fighting corruption and patching-up an ailing economy in the Philippines remain the main issues as the country edges closer to choosing its next president. The archipelago, largely dependent on foreign remittances and traditional industries, suffered one of Asia’s sharpest contractions during the pandemic largely owing to missteps by the sitting president.

Filipinos continue to reel from climbing electricity bills, frequent typhoons, and now, soaring fuel prices brought about by the Russian war against Ukraine. Environmental issues feed into the economic well-being of the country and have become more relevant than ever.

An estimated 67 million Filipinos are expected to cast their ballots on 9 May, where 10 candidates vie for the country’s top spot, concluding President Rodrigo Duterte’s six-year rule. 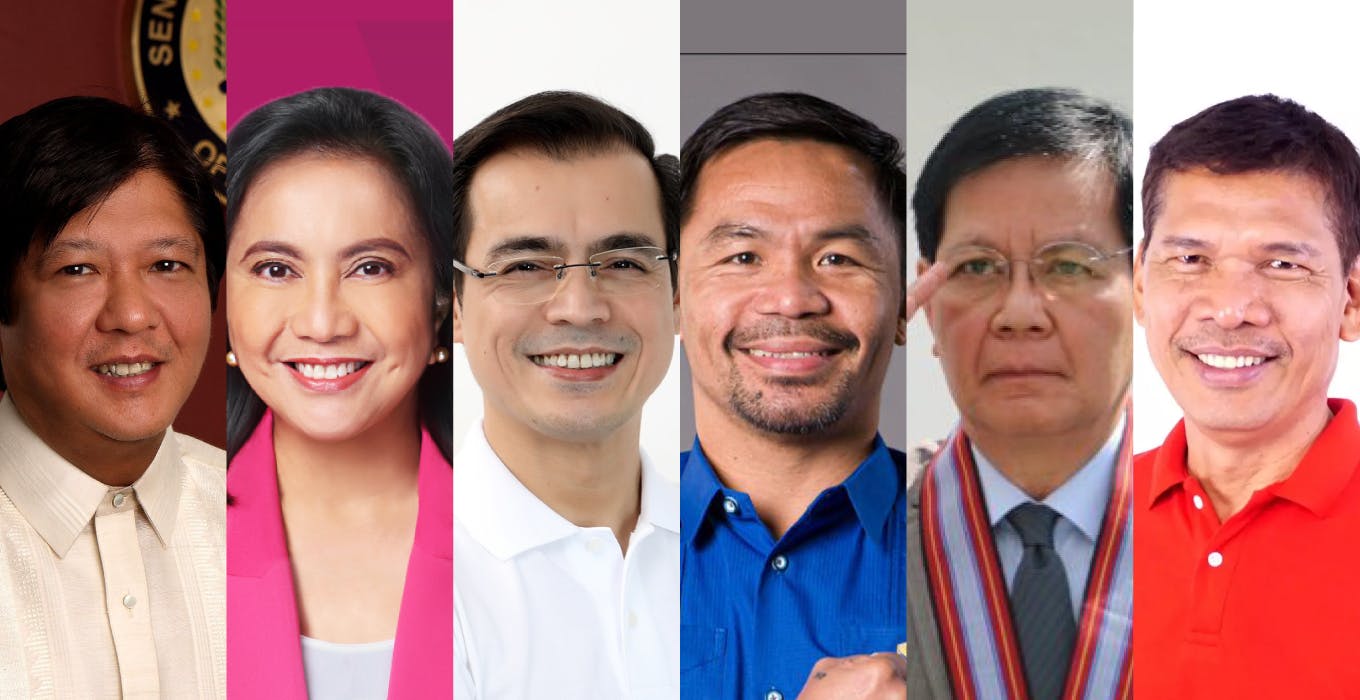 Six of them are considered the main contenders, including Ferdinand “Bongbong” Marcos Jr., son and namesake of the late dictator, who is the frontrunner according to polls, despite numerous efforts against his presidential bid.

He is trailed by the incumbent vice president Leni Robredo, the only woman in the race, a situation she also faced during her run for her current job six years ago.

As the presidential aspirants jostle for power, Eco-Business has identified the burning environmental issues that the country’s new premier will have to grapple with as the Philippines looks to revive its ailing economy.

Filipino consumers were warned early this week of soaring electricity bills in the coming months, largely due to increasing coal prices.

Electricity rates in the Philippines are among the highest in Southeast Asia, thanks to the heavy reliance on imported fossil fuels which have risen in price.

Although the country banned the construction of new coal-powered plants two years ago, more than three gigawatts of additional coal is waiting to come online by 2027. The outgoing administration is considering fossil gas and nuclear power to boost energy security.

Russia’s invasion of Ukraine has brought calls to embargo the oil and gas exports that support the country’s economy. This has triggered another global energy crisis, with the turmoil adding fresh impetus to the shift to greener and more secure energy.

“Renewable energy is cheaper than ever to build and deploy. It offers long-term benefits without burdening consumers with volatile fuel costs, as was the problem with coal,” said Gerry Arances, convenor of the Power for People Coalition, a network of civil society organisations, communities and cooperatives that rally against pollutive fuels.

“This is true even in terms of job generation: the Philippines’ energy plan itself says renewable energy technologies can create seven times the number of jobs fossil fuel projects can offer.”

2. The environment and mining for metals

The decision to lift a four-year ban on open-pit metal mining last year was met by harsh criticism from environmental groups for the threats it poses to biodiversity and communities.

According to the new order, the reversal of the ban was meant to “revitalise the mining industry and usher in significant economic benefits to the country by providing raw materials for the construction and development of other industries and by increasing employment opportunities in rural areas”.

However, mining corporations do little to create jobs within the country, said Yolly Esguerra, national coordinator of Philippine Misereor Partnership Inc. a network of 300 civil society organisations in the Philippines who are engaged in social development issues, including campaigning against mining.

We recognise the role of minerals in industrialisation and its potential contribution in renewables and the clean energy sector. [But] the next Philippine administration must ensure that no-go zone areas must be clearly delineated across the Philippines.

“The Philippine mining industry is, was, and forever shall be, an export-oriented industry geared towards serving foreign countries’ need for raw and semi-processed minerals,” she said, citing how the share of the local mining sector to the economy has yet to surpass the 2 per cent share to the country’s total revenue, based on latest government data.

Alyansa Tigil Mina (ATM), a coalition of anti-mining groups, is more open for mining activities to continue as long as only certain areas will be identified for operations and affected communities, especially those inhabited by indigenous peoples, be consulted in the decision.

“We recognise the role of minerals in industrialisation and its potential contribution in renewables and the clean energy sector,” said Jaybee Garganera, national coordinator of ATM, “[But] the next Philippine administration must ensure that no-go zone areas must be clearly delineated across the Philippines, areas that will not be disturbed or mined, because of their intrinsic value.” 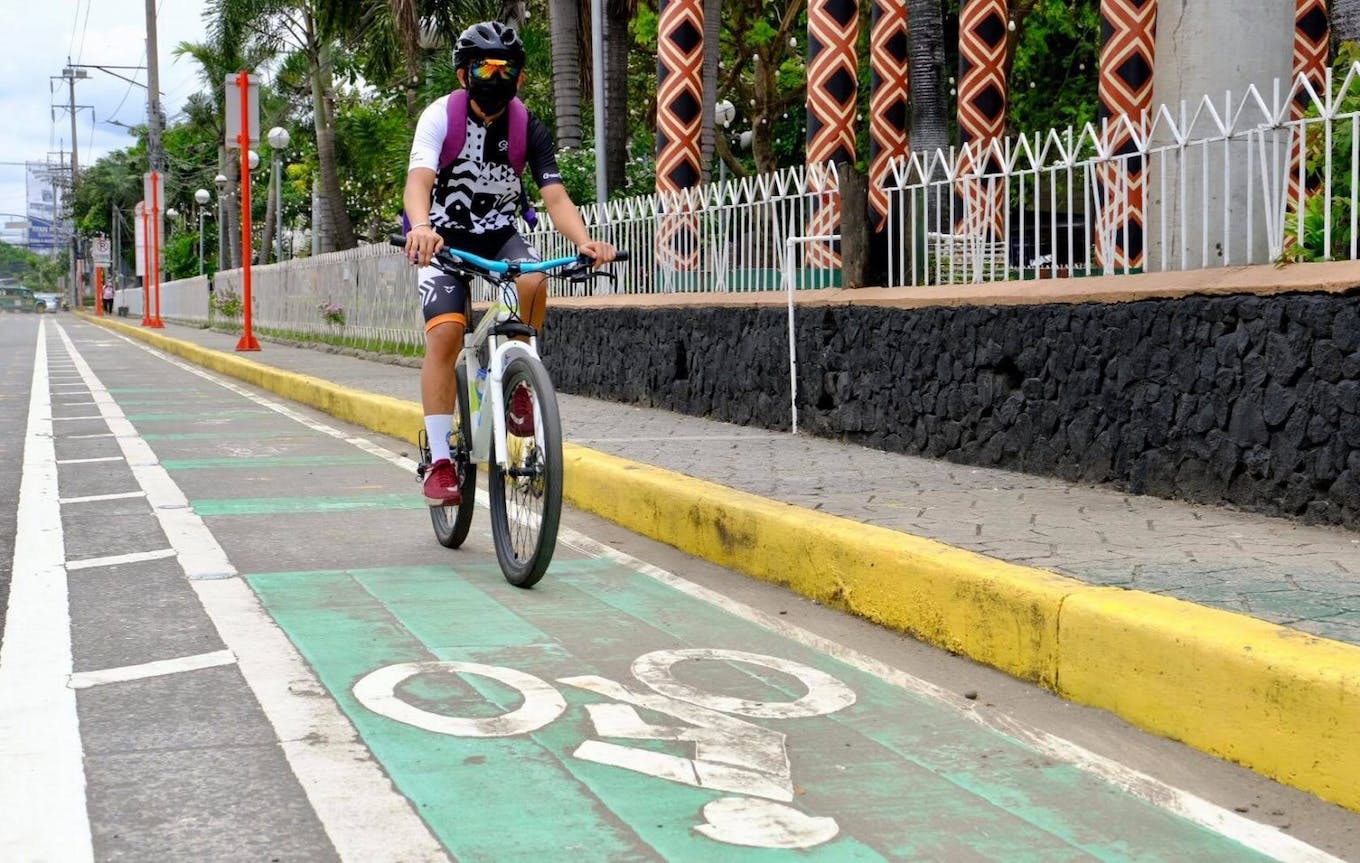 A cyclist passes through a section of a newly-built 54.71 kilometer bike Lane in Davao City in Mindanao, as part of the goverment’s pandemic recovery plan. Image: Davao City Philippines 8000 Facebook page

The government has allotted US$24.8 million under the Covid-19 recovery fund to build a 522.73- kilometre bike lane network on the country’s national roads, which is more or less the distance from Metro Manila in the Luzon island group to Cebu in the Visayas.

Bicycle ownership in the country surged from 8 per cent in November 2020 to 20 per cent or 4.9 million bicycle owners in May 2021 due to the lack of public transportation caused by the pandemic lockdowns, according to a survey by non-profit research institute, Social Weather Station.

“The steps taken to improve mass transport at the height of the pandemic are a start but they are still far from presenting it as a superior form of transportation—and this is important for the next president to prioritise in order to trigger a shift to active and mass public transportation,” said Ira Cruz, director of AltMobility PH, a non-profit which advocates sustainable and inclusive transport in the country.

Despite an existing government policy to prioritise commuters, government agencies continue to favour investment in infrastructure for private vehicles which represent about 12 per cent of road users over the majority that walk, bike, or take mass public transportation, Cruz added.

The steps taken to improve mass transport at the height of the pandemic are a start but they are still far from presenting it as a superior form of transportation.

Biking infrastructure should be encouraged in cities because it would address public transport shortages and the spike in bus and tricycle fares, said National Economic and Development Authority (NEDA) director-general Karl Chua.

The NEDA chief noted that the land transport sector’s contribution to gross domestic product last year fell 30.7 percent — shrinking faster than the GDP itself, which slid 9.5 percent during its worst post-war recession with protracted lockdowns battering the economy.

“Because of its large economic linkages, a sharp contraction in transportation can significantly bring down the rest of the economy,” Chua said. “As we learn to live with the virus, improving access to mobility in the country is crucial in jump-starting the economy.”

Apart from biking, the country is targeting a 10 per cent increase in the penetration rate of electric vehicles by 2040 to help it reach its goal to cut greenhouse gas emissions by 75 per cent from 2020 to 2030.

A bill which proposes a national policy for the use of electric and hybrid vehicles and the establishment of electronic charging stations in the country, is now in the hands of the incoming administration for its approval.

4. Fighting for justice: getting rich countries to pay for climate damages

On Monday, President Duterte called for developed countries to pay for the destruction caused by pollution they emit, saying that he hoped the next administration will do better in the fight against climate change.

The Philippines contributes less than 0.4 per cent to the climate crisis; the global north is responsible for 92 per cent.

President Duterte’s statements coincide with storms and typhoons that have hit the Philippines and are growing progressively more destructive. Super typhoons are being triggered by greenhouse-gas emissions from human activity. Activists have been clamoring for the next president to champion climate justice by asking the world’s top emitters to pay for the destruction brought about by global heating.

“Climate risks are now appearing more frequently and are more intense. Death and loss of homes and livelihoods are a yearly occurrence in the Philippines. The only uncertainty we have each year is how bad it’s going to be,” said Greenpeace campaigner Virginia Benosa-Llorin.

“Do we pass this off as ‘fate’ and merely accept it, even when science has shown that there are entities that are responsible for the climate crisis? The next administration must take a now or never stance in ensuring climate action and calling for climate justice, in order to secure the future of all Filipinos,” she added.

The country is still recovering from the effects of tropical storm Megi, which spawned floods and landslides last week in the Visayas island group, leaving at least 172 dead.

It came four months after super typhoon Rai devastated swaths of the country, which resulted in 400 fatalities and more than US$500,000 worth of damages to crops and houses.

The Philippines, ranked among the most vulnerable nations to the impacts of climate change, is hit by an average of 20 storms every year.