A new order says nuclear will help the phase-out of polluting coal. The Philippines previously put nuclear plans on ice due to safety concerns.

Philippine President Rodrigo Duterte has signed an executive order that will pave the way for the government to tap nuclear power as an alternative energy source, in a bid to phase out coal-fired power plants.

The government announced in 2020 that it would stop constructing new coal-fired power plants, averting over 10-gigawatts (GW) of coal fired power from the country’s energy pipeline.

As power demand soars in one of Southeast Asia’s fastest-growing economies, the country’s energy chief Alfonso Cusi has been steadfastly advocating the use of nuclear, despite public concern over safety in a country hit frequently by natural disasters. Nuclear power is touted as a possible solution to the country’s supply which is vulnerable to seasonal outages. The country’s electricity prices is one of Southeast Asia’s highest. 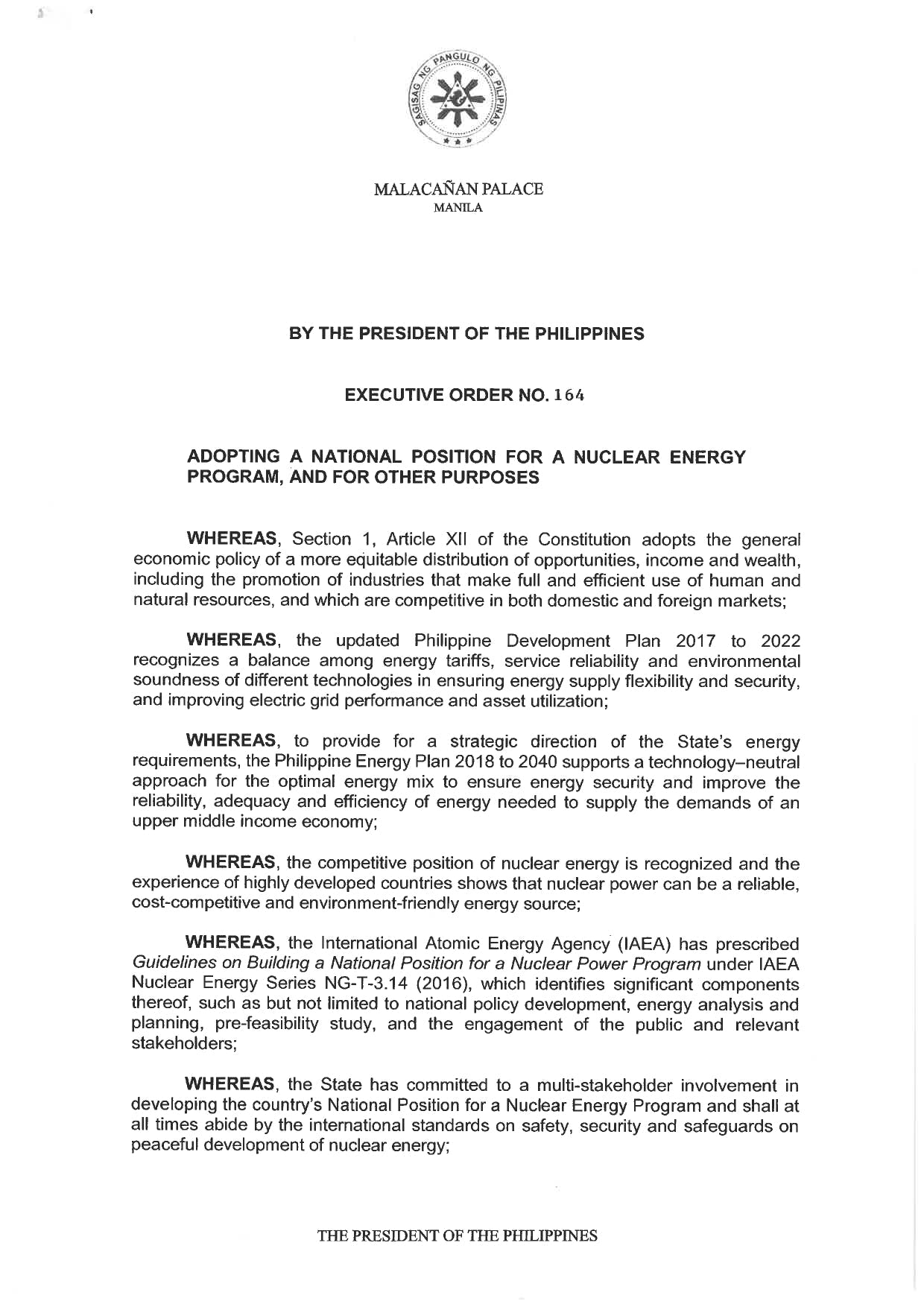 A copy of executive order 164 which approves inclusion of nuclear power in PH energy mix. (Click to enlarge)

The executive order signed on 28 February but made available publicly today, stated that “nuclear power shall be tapped as a viable alternative baseload power source along with alternative energy resources, to address the projected decline of coal-fired power plants which have come under increasing environmental opposition.”

“For the country to achieve its sustained growth targets, it must ensure that it has a reliable, secure, sustainable, quality and affordable electricity supply, including sufficient reserve to guarantee that there will be no disruptions in the power supply,” the document read.

Signed three months before Duterte ends his six-year term in office, the order also directs an inter-agency panel on the viability of the reopening the shelved Bataan Nuclear Power Plant (BNPP), which was built during the presidency of the late dictator Ferdinand Marcos.

Constructed in 1976 in response to an energy crisis, and completed in 1984, the government suspended it two years later following Marcos’ ouster and the deadly Chernobyl nuclear disaster in Ukraine.

Since 2009, the BNPP has been opened as a tourist attraction for a fee, helping defray the cost of maintaining it.

The late dictator’s son, Ferdinand Marcos Jr, who is currently the front-runner in the presidential elections in May, has said he will revisit the plan if elected.

Activists have called the Duterte administration’s move to make nuclear energy part of the country’s energy mix a “treacherous move spurred by misguided interests that are not aligned with the interests of the Filipino people.”

“The Duterte administration is about to leave a tarred legacy and is setting us up for another horror story like Chernobyl and Fukushima, and that of countries that utilise nuclear power but have no solution to radioactive spent fuel waste. Current and future generations will be left to face the dangerous risks of harnessing nuclear energy, along with the impacts of the climate crisis,” said Khevin Yu, energy transition campaigner, Greenpeace Philippines.

Half of the country’s energy mix comes from mostly imported coal, and 20 per cent from natural gas from the Malampaya gas field which will run out in less than five years, leaving the country with little choice [but to consider nuclear].

But the Philippines’ carbon targets cannot be met without it, said Dr Carlo Arcilla, director, Philippine Nuclear Research Institute, the research and development arm of the Department of Science and Technology (DOST).

“While the push for renewables is commendable, the simple fact is that renewables cannot replace the demand for baseload power generation,” Arcilla told Eco-Business.

Solar and wind energy are subsidised by feed-in-tariffs, which provide the owners of small or large-scale wind and solar arrays with a guaranteed price for electricity. But one megawatt of solar requires one hectare of flat agicultural land, and wind will even demand more, Arcilla added.

“Half of the country’s energy mix comes from mostly imported coal, and 20 per cent from natural gas from the Malampaya gas field which will run out in less than five years, leaving the country with little choice [but to consider nuclear],” he said.