Around 3,000 waste pickers work Bantar Gebang landfill, east of Jakarta. They earn a few dollars a day salvaging recyclables and face a range of dangers, from landslides to lightning. The role they play in society is undervalued, say experts.

Southeast Asia’s biggest landfill reaches like the back of an elephant, 50 metres into the sky.

The Bantar Gebang landfill in Bekasi, on the outskirts of Indonesia’s capital Jakarta, is continually being re-built by an army of excavators, toiling to prevent the mountain of trash from avalanching. Numerous landslides have buried people living around the dump over its 33-year history.

The landfill sprawls across 110 hectares and is constantly growing – 7,000 tonnes of trash are added daily to the site of 40 million tonnes of garbage produced by the 32 million people living in the Greater Jakarta area.

The site is a product of Indonesia’s haphazard approach to waste. Since there are no formal rules for segregating and sorting trash for recycling, most of it ends up here. About 60–70 per cent of the landfill is made up of organic waste, the cause of a noxious odour that overpowers the visitor long before the site comes into view.

There are rumours that the site, which was expected to reach full capacity by 2021, will be closed or excavated for sale as fuel to extend its life.

Indonesia’s plastic recycling rate is 10 per cent, and would be much lower if it wasn’t for the country’s 3.7 million waste pickers, 3,000 of whom work and live around Bantar Gebang landfill, collecting and sorting thousands of tonnes of Jakarta’s left-overs.

“Without government initiatives to build a circular economy, we really depend on these people to manage our trash,” says Muharram Atha Rasyadi, a campaigner for Greenpeace, a non-profit. 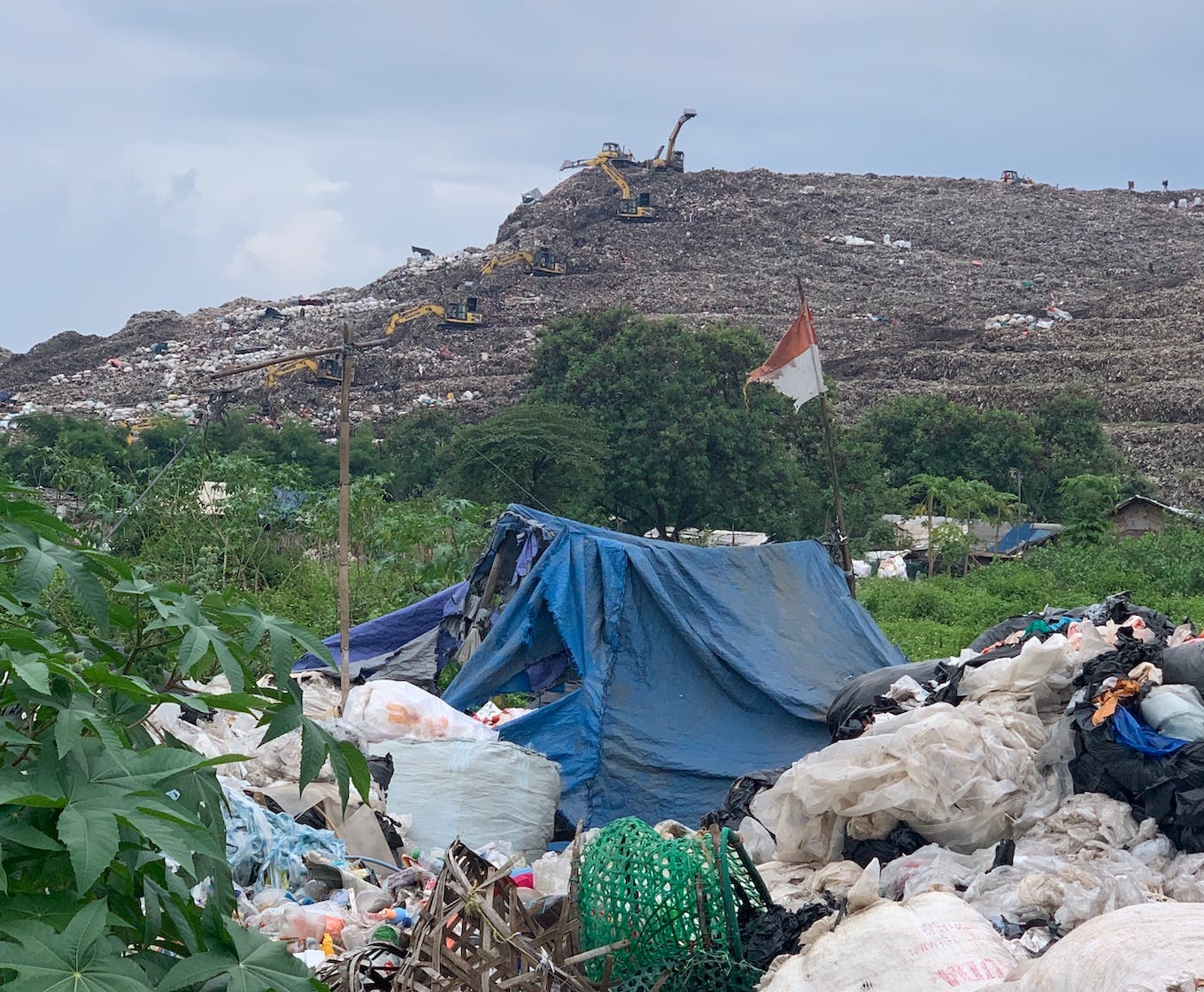 A makeshift tent bearing the Indonesian flag is submerged by unsorted rubbish beneath the landfill. Image: Robin Hicks/Eco-Business

Among those people is 49 year-old Casnadi, a “first collector” who works on the frontline of Bantar Gebang landfill’s waste management system. He retrieves any waste of value from the landfill, and sells it to middlemen who sort it and sell it on to recyclers.

Typically, a first collector will salvage around 60 kilograms of recyclable post-consumer waste a day. Less if it rains, when the landfill turns sludgy. It is now October, just before the monsoon rains make life particularly difficult for the waste pickers of Bantar Gebang.

The most valuable items he collects are recyclable plastics, polyethylene terephthalate (PET) being the prized type of plastic. Single-use sachets, which were introduced by Western packaged goods firms like Unilever and Procter & Gamble to sell their goods in small quanties to low-income families, are worthless and not collected.

“I came here because I needed to find an income. That was 22 years ago,” Casnadi told Eco-Business. 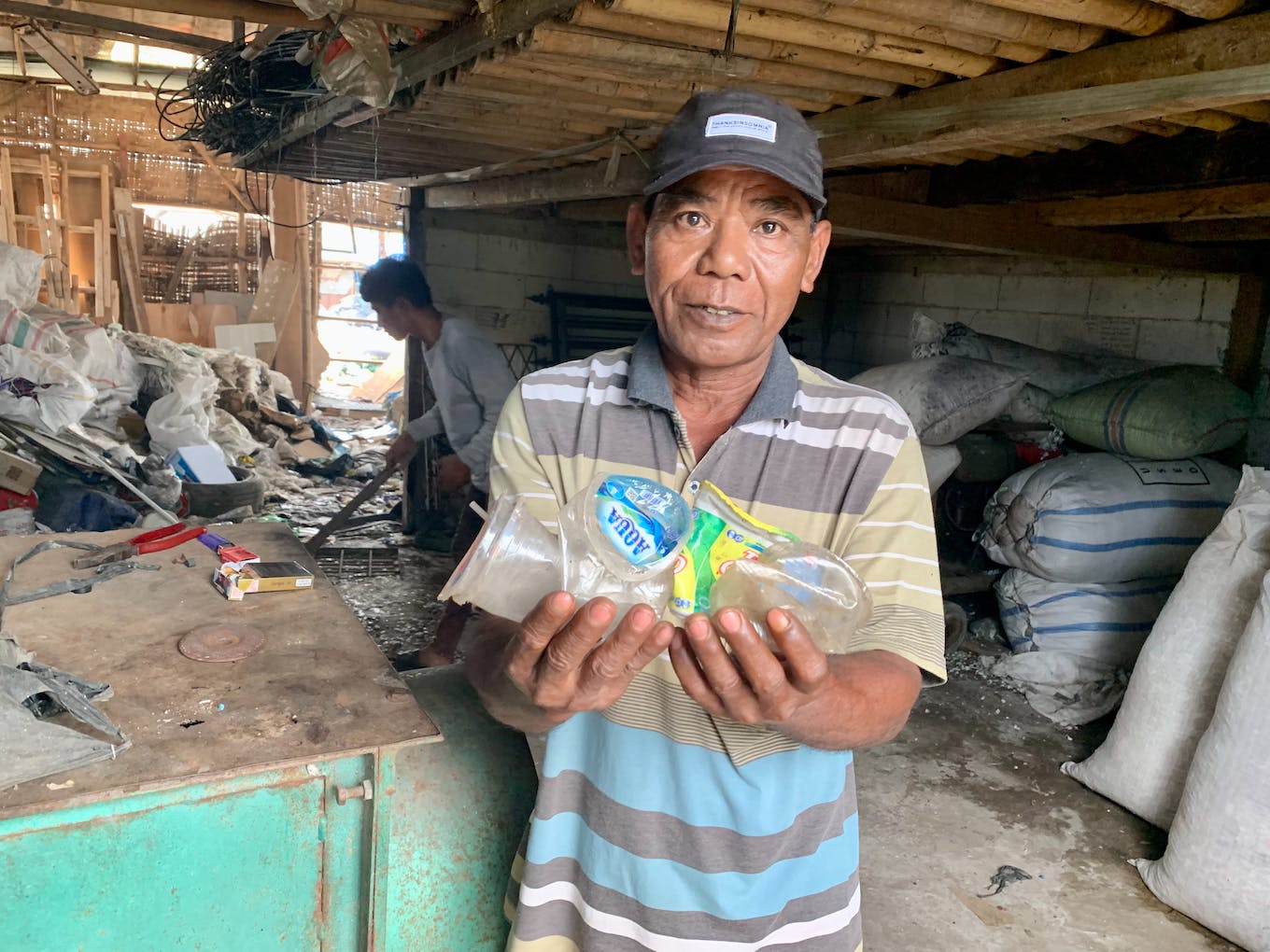 Casnadi, 49 year-old first collector from Banten, holds plastic drinks cartons that have been sorted for recycling. Casnadi has lived and worked by Bantar Gebang landfill for 22 years. Image: Robin Hicks/Eco-Business

Asked about the biggest challenge he faces in his work, Casnadi is pragmatic. “The market price [of recycled plastic]. Sometimes it is volatile and that affects how much we can earn,” he said.

Casnadi said he hopes that Indonesia stops waste imports, as plastic waste brought in from overseas causes the local price of plastic to crash.

“We don’t have solid regulations to protect our country from imported waste from industrialised countries. There are regulations, but they are not clear,” says Atha of Greenpeace.

While some of the plastic can be salvaged by waste pickers like Casnadi and sold into the recycling trade, much of it is openly burned or dumped, finding its way into rivers and eventually the ocean. 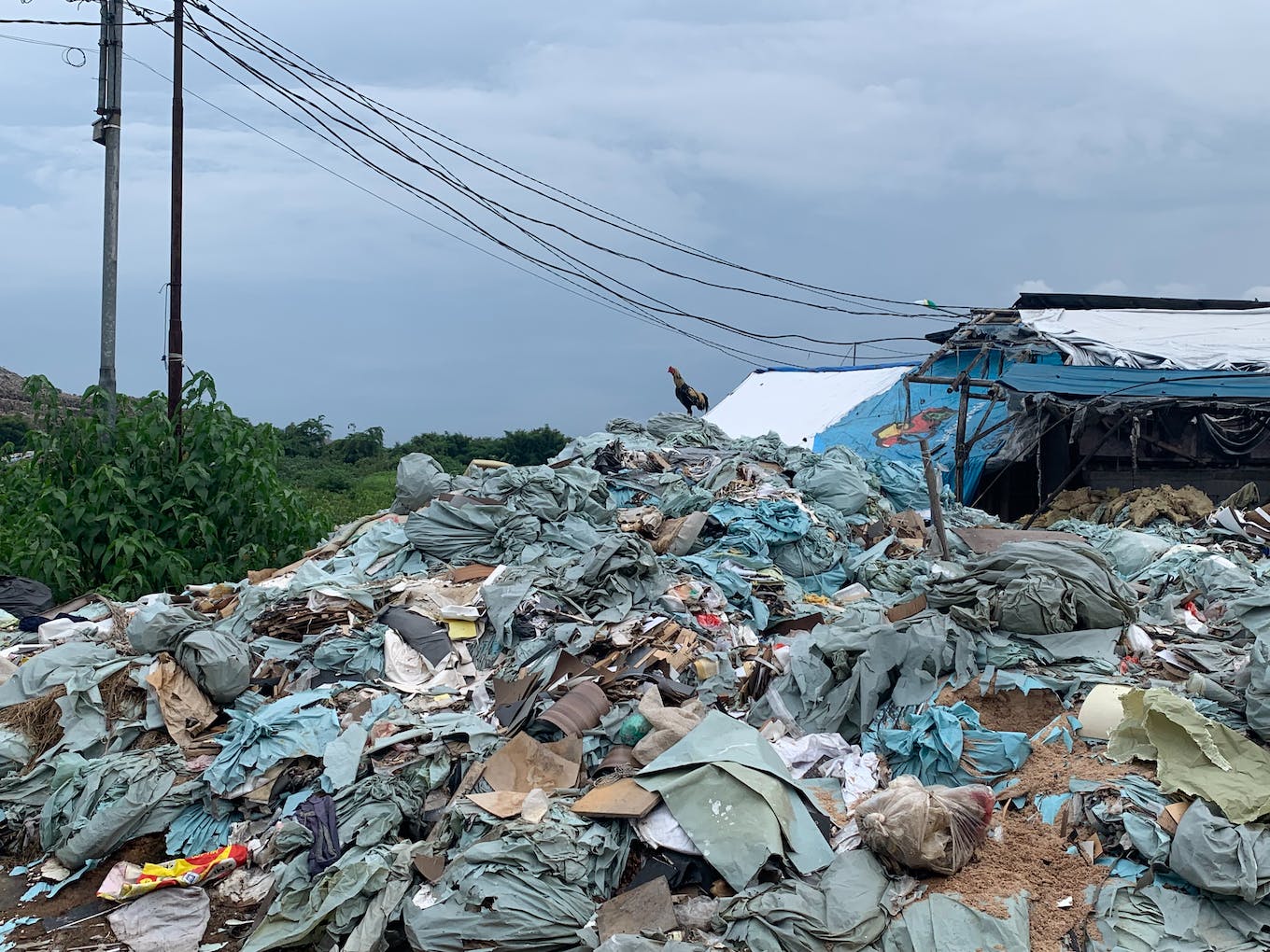 A rooster perches on top of a trash pile at Bantar Gebang landfill. Image: Robin Hicks/Eco-Business

Indonesia is the world’s second largest contributor to marine plastic pollution after China, leaking more than 600,000 tonnes of plastic into the sea each year – a rate that sharply increased during the Covid-19 pandemic as plastic-packaged online deliveries soared.

Though the practice is illegal, it is estimated that almost half of the total plastic waste generated in Indonesia is openly burned. Burning plastic produces carcinogenic toxins such as dioxins and furans. Open landfills like Bantar Gebang also emit vast quantities of methane, a powerful climate agitant, and leach toxins into the soil and water supply.

But inhaling burning plastic or bathing in contaminated water is not among the biggest concerns of the waste pickers of Bantar Gebang. Tharmin, a waste-picker coordinator who has worked the landfill for 30 years, said the risk of injury from stepping on broken glass, lightning strikes and falling excavators were his biggest worries.

A waste picker was recently injured by an excavator that toppled on the landfill, said Tharmin, who wears a singlet and flipflops to work. 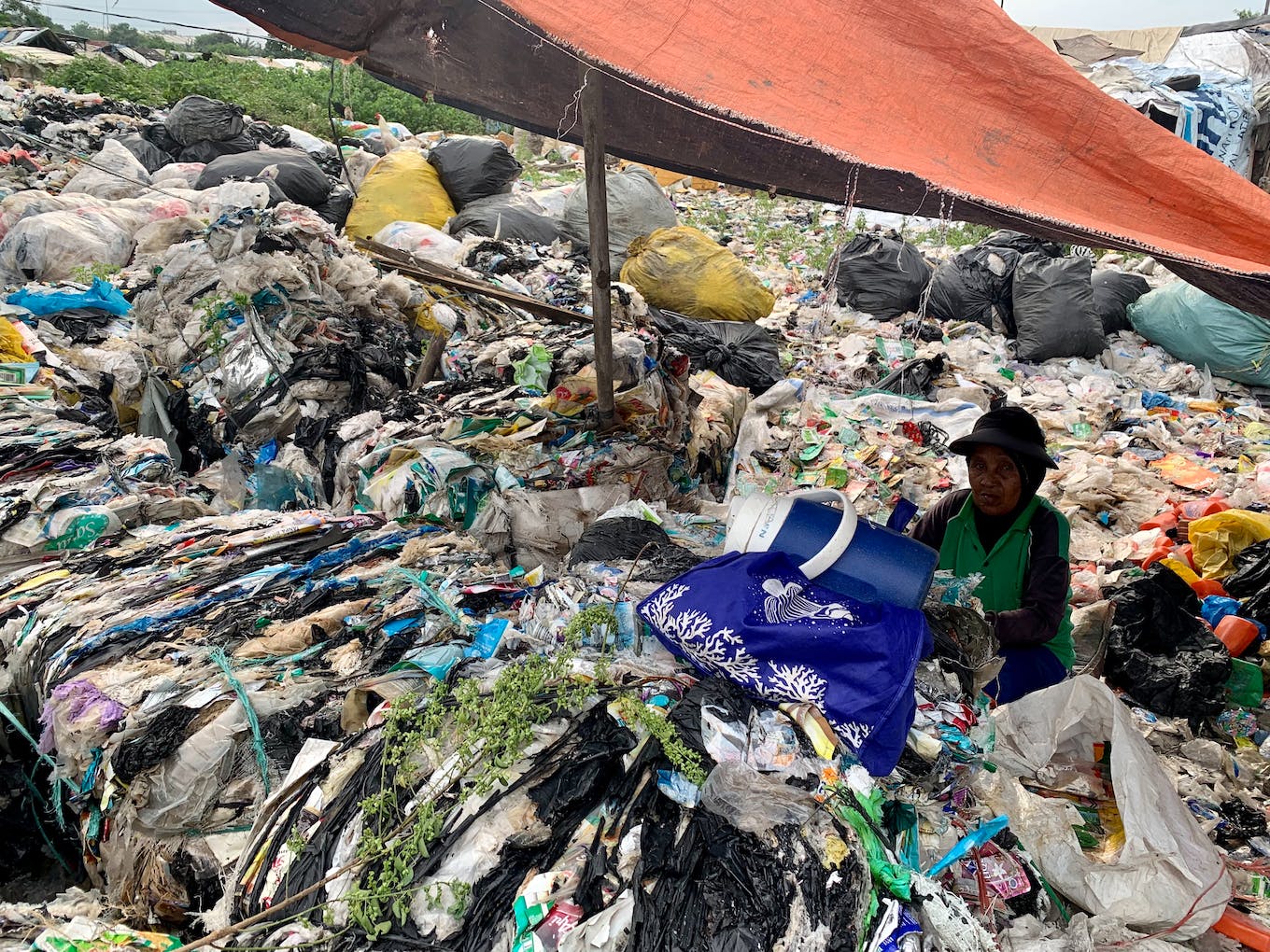 An elderly woman sorts plastic for recycling at the foot of Bantar Gebang landfill, under the cover of a makeshift tent. Image: Robin Hicks/Eco-Business

“Waste is a harsh, dangerous industry, but it is the only way of life for many people with little education,” Tharmin told Eco-Business.

Tharmin gets up at 4am, attends prayers at the mosque at the foot of the landfill, works all day on collections, and finishes work just before sunset at 5pm.

Though life is hard for the waste picker community, they have some support from the Indonesia Waste-pickers Union, or Ikatan Pemulung Indonesia in Bahasa (IPI), which provides health education, legal aid, and child care support, and shares data on the price of plastic.

“We look after one another. We’re like one family,” says Pris Polly, head of IPI. 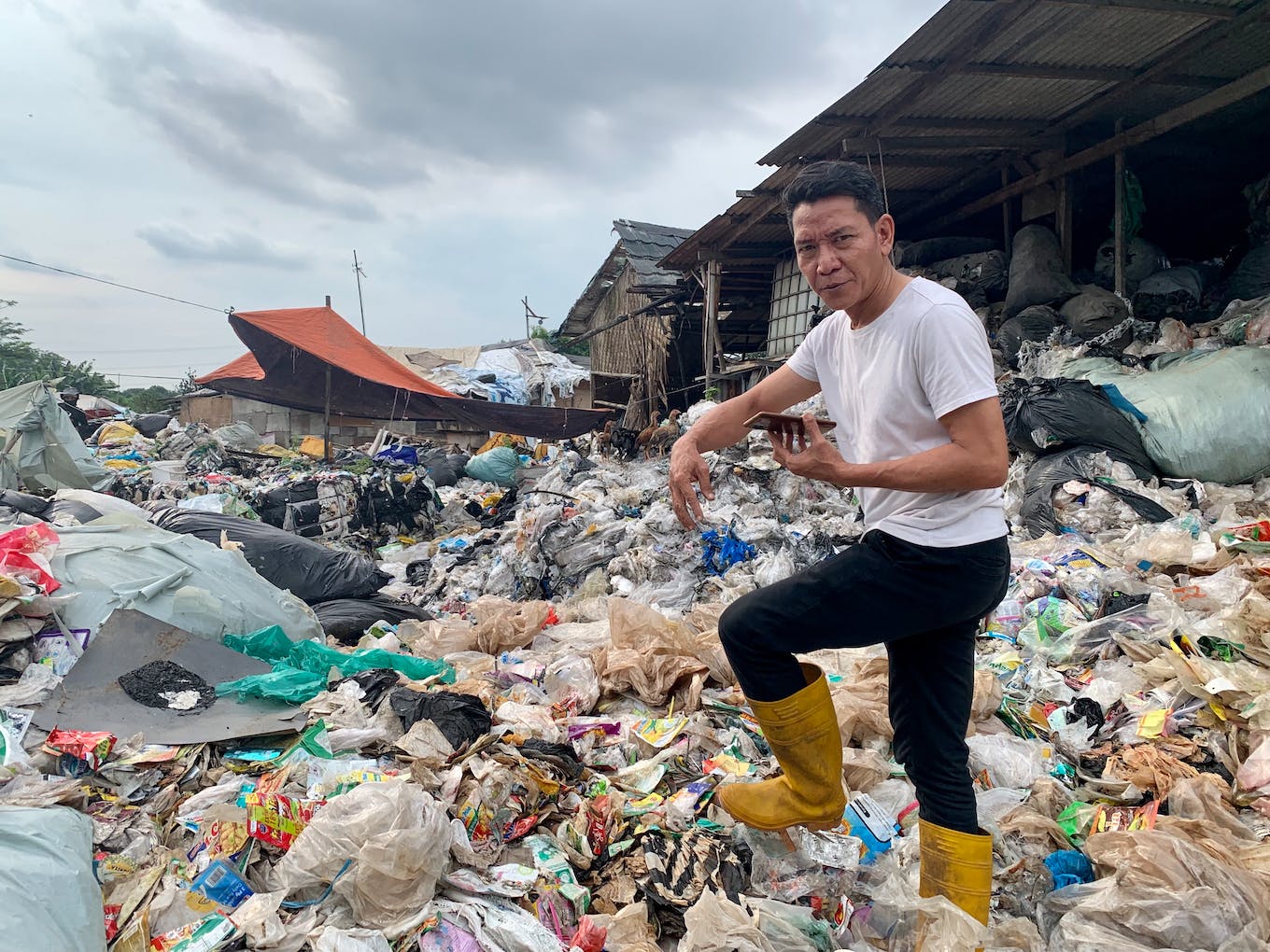 In a settlement at the foot of the landfill, waste pickers live in corrugated iron-roofed homes – some made from waste – and bathe in water that comes out of a communal pipe.

The landfill does not have a geomembrane to prevent toxins leaching into groundwater, so sourcing clean water is not easy for the people living around the site.

There are no proper toilets, so people defecate in makeshift latrines made from slabs of wood built over the stream that runs through the village. 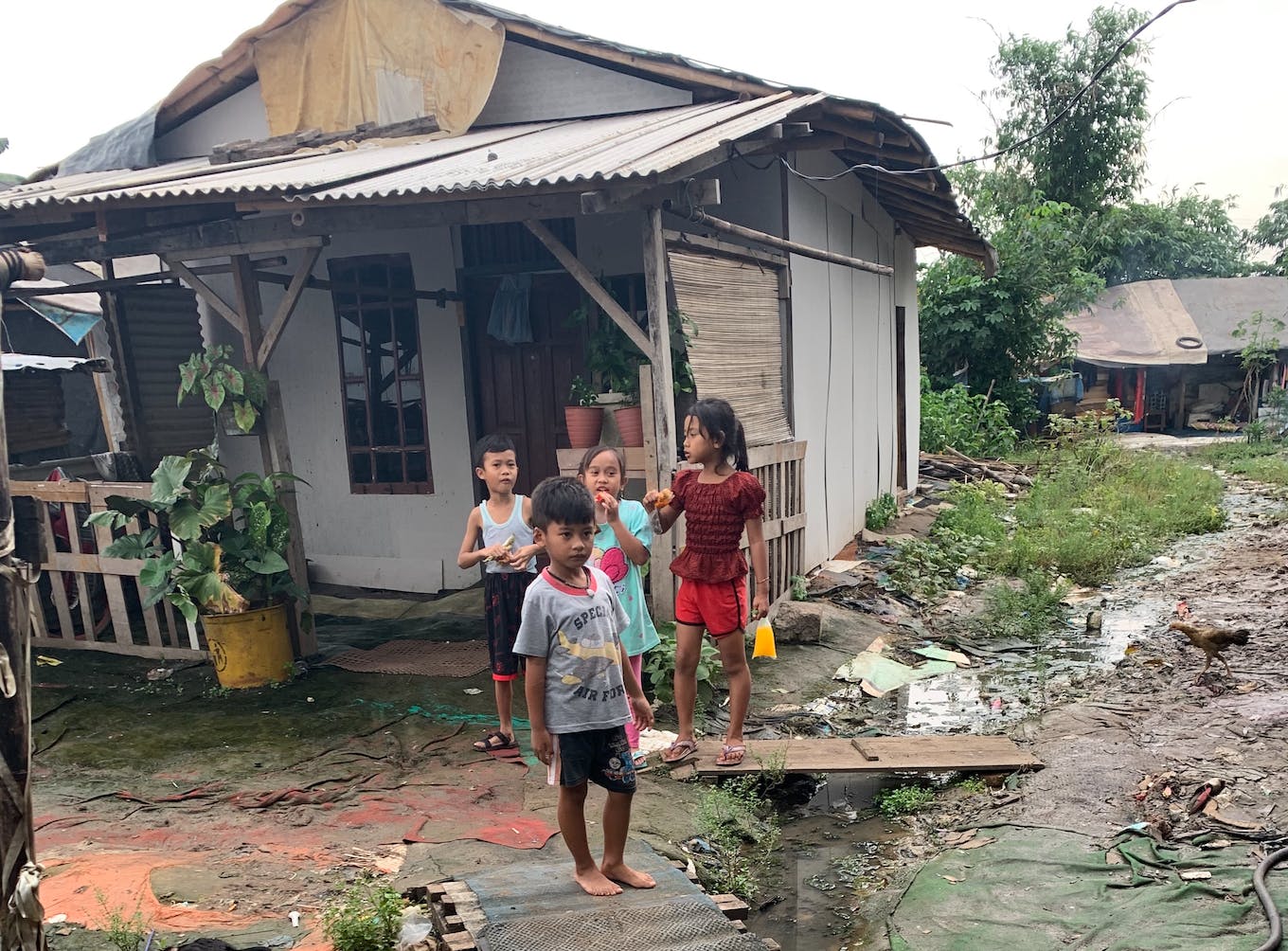 Children hang out outside their home by the landfill. Image: Robin Hicks/Eco-Business

Some people are trying to give waste pickers the opportunity to leave the landfill and find a new life away from it. But most waste pickers are reluctant to leave a place where they have lived rent-free for most their lives.

Alvaro Aguilar runs business development and logistics for Prevented Ocean Plastic, a recycling programme. He has offered first collectors more than double the going rate if they set up their own collection points outside of the landfill.

“They could make more money by collecting less, but they choose to stay,” says Aguilar, who lived on a landfill for a year in his native Mexico before entering the recycling business 20 years ago.

“Some people never want to leave. The place has different rules. Some people get married here. Children grow up on the landfill and don’t know of any other way of life,” he says. 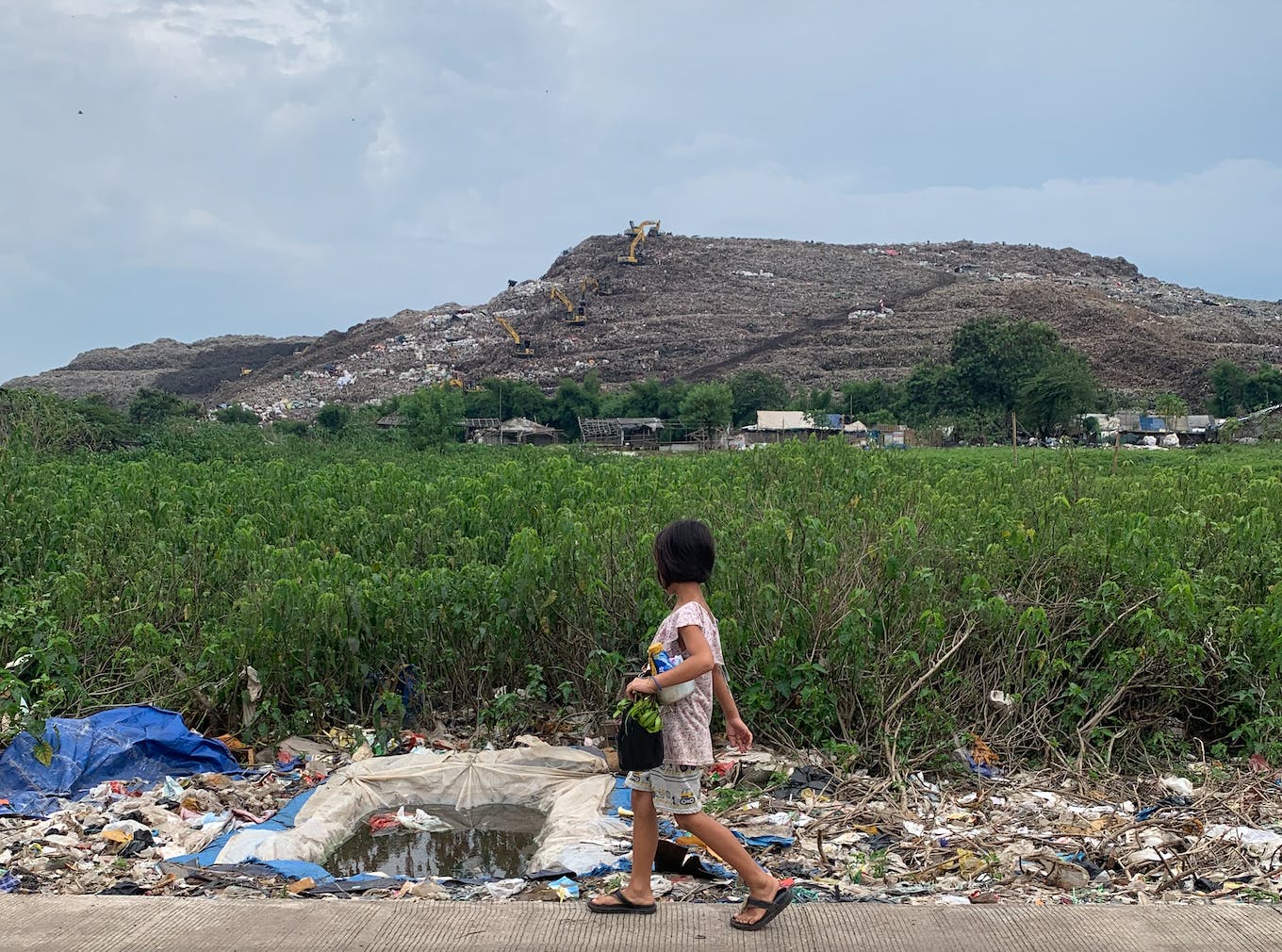 Child labour is not uncommon in the informal waste trade in Southeast Asia, and a big part of the waste picker workforce on Bantar Gebang landfill are teenaged or younger.

A study by Save the Children estimates that 1,500 children work on the landfill as unpaid workers, collecting and sorting, or as paid workers loading and unloading garbage trucks.

These children are exposed to serious health risks and injury, and although many children in Bantar Gebang go to school, many drop out and absentee levels are high. 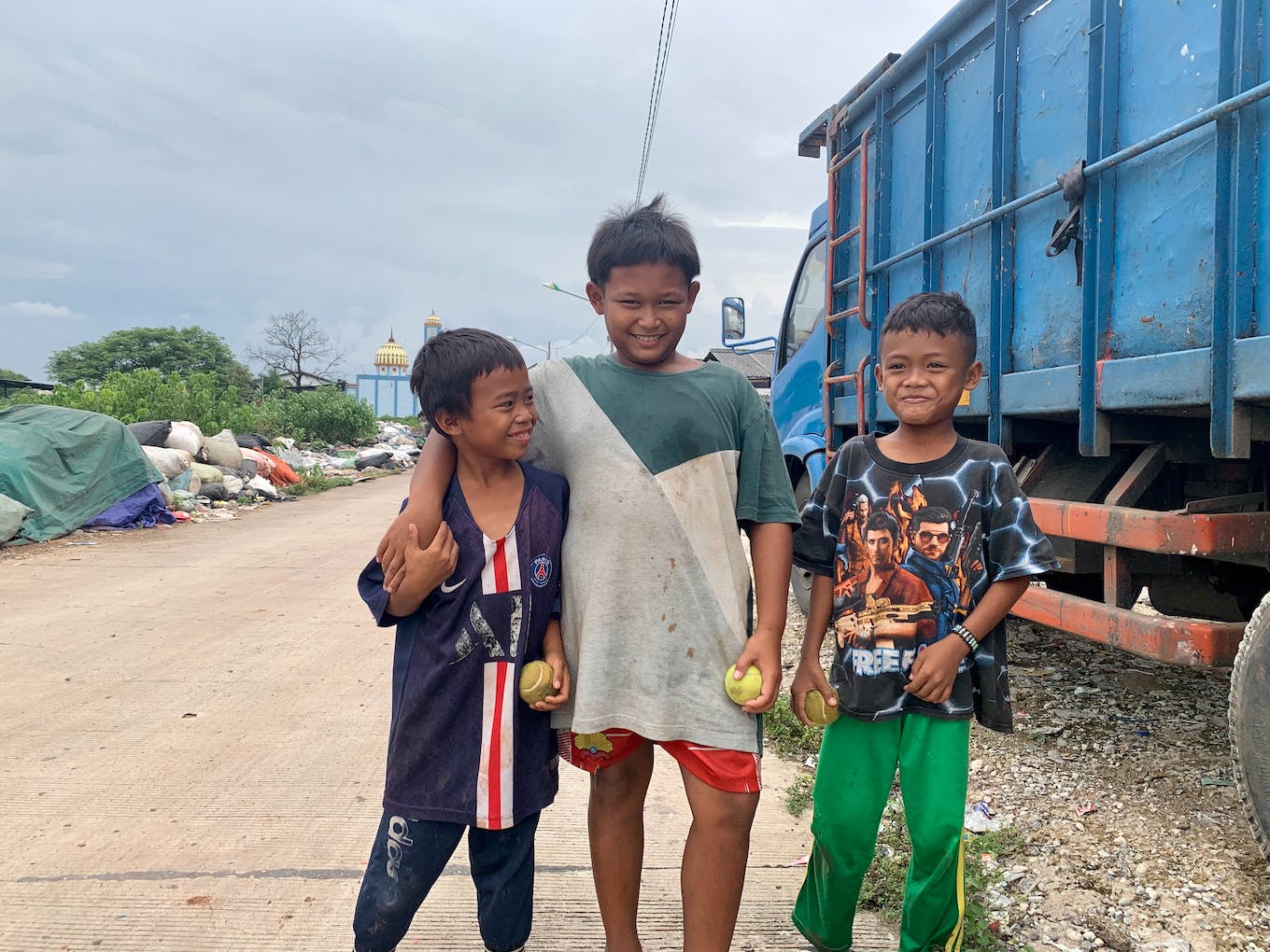 Aguilar doesn’t buy plastic from waste pickers who collect from the landfill. “That would just encourage people to stay there,” he says.

He believes waste collectors would have better lives if recycled plastic had more market value.

Currently, recycled plastic is much more expensive than virgin material, and big consumer goods firms with sustainability commitments to increase their use of recycled resin are unwilling to pay the mark-up, Aguilar says.

“These brands are not factoring in the social and environmental benefit of buying recycled plastic in their calculation,” he says. 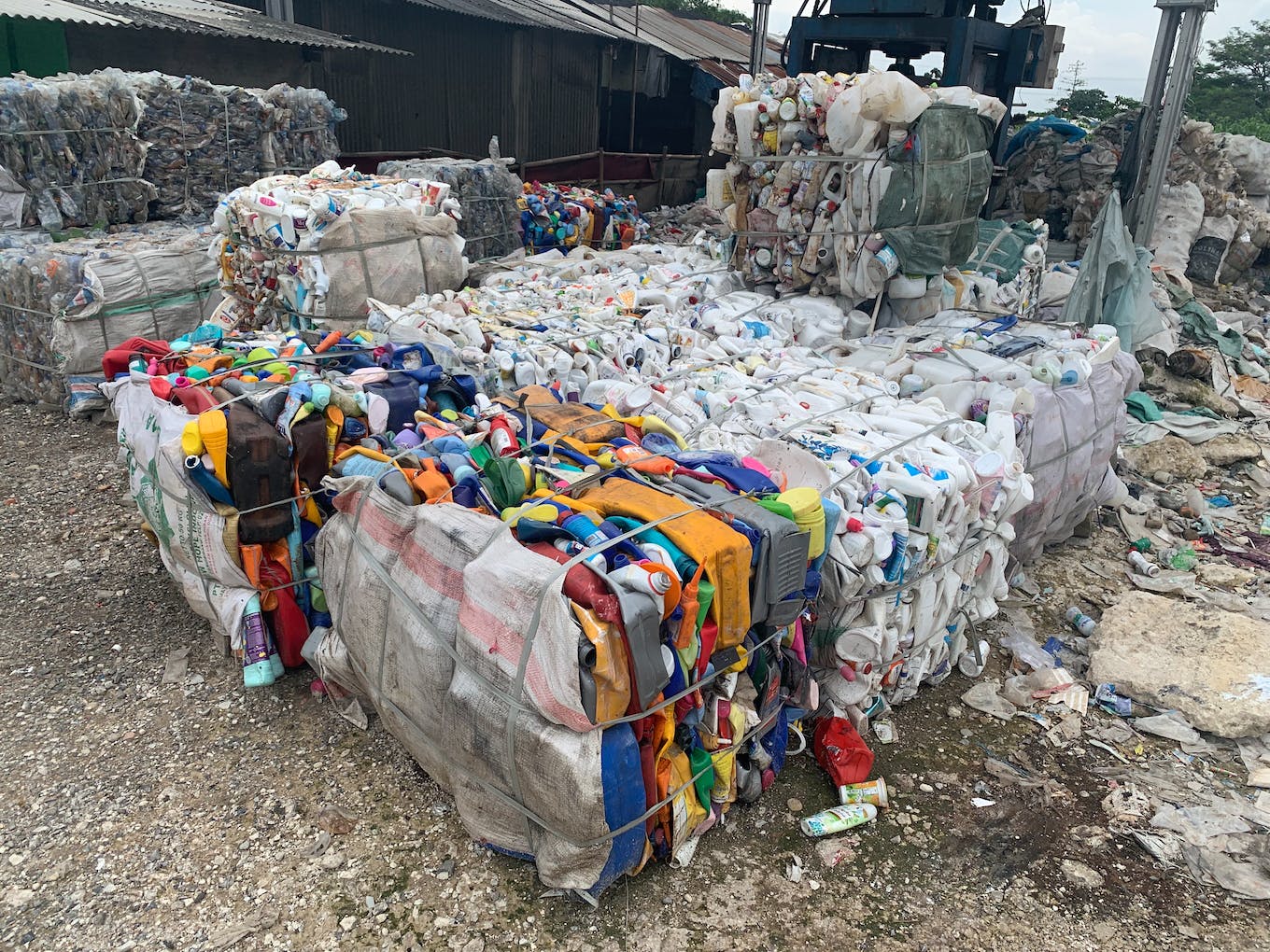 The value of recycled plastic is linked to the value of the lives of waste collectors, he says.

“Society considers people who collect plastic as low class. They’re not. They do a job that is more worthy of respect than most – they clean up after us,” he says.

“They feel shame because of how society judges them. But they shouldn’t.”

“They should be recognised for the crucial role they play in building a circular economy for plastic.” 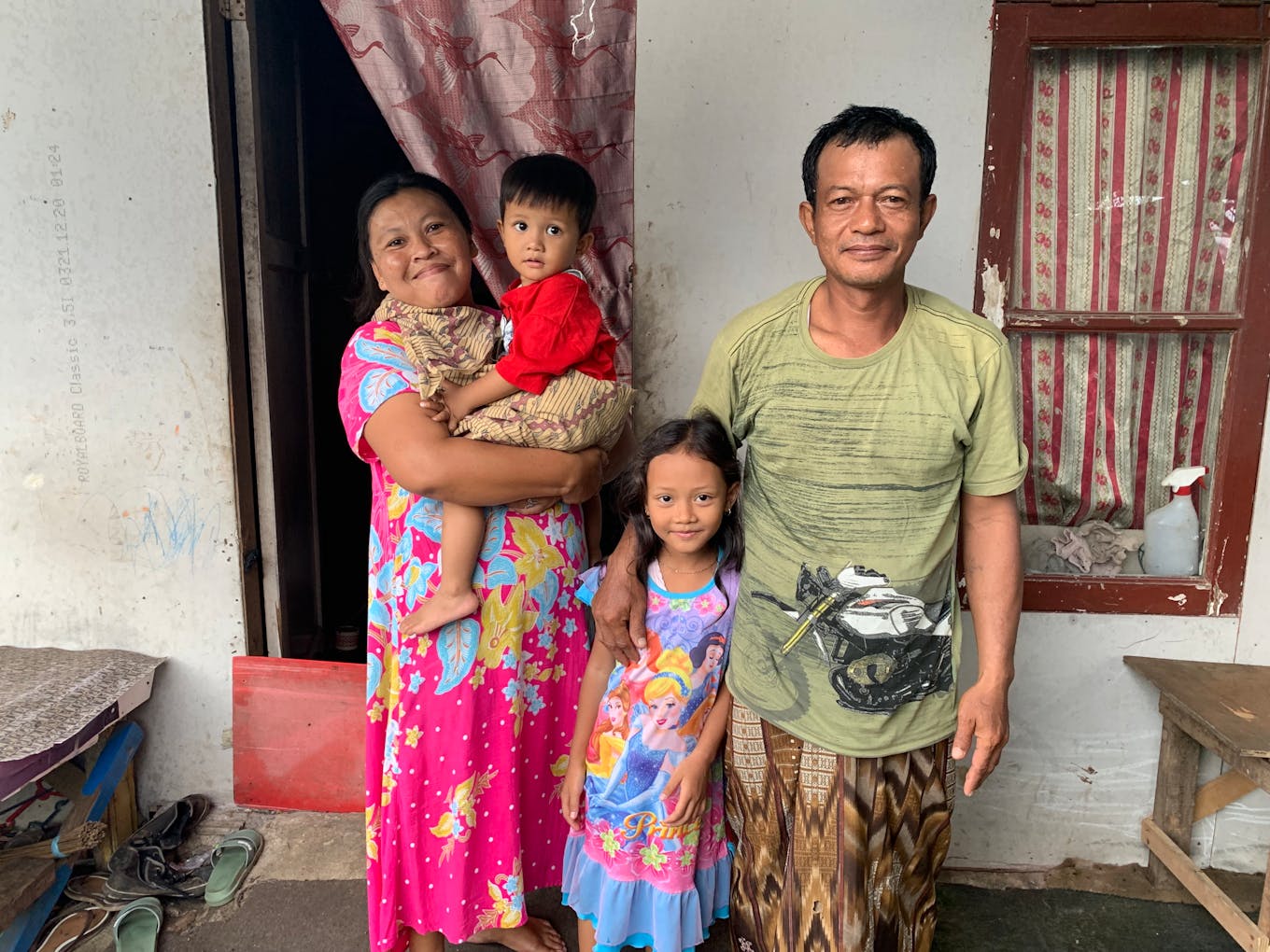 Eco-Business reported on the lives of child waste pickers in the Philippines in 2022.