How Philippine social enterprises battered by the lockdown are staying afloat

Nearly one in three businesses that support mostly small farmers, women and micro-entrepreneurs in the Philippines saw zero revenue at the height of the pandemic. Here’s how they’re fighting back.

Amid the biggest health and economic crisis of a generation, Philippine social enterprises have experienced a sharp slump in revenue, with the most vulnerable of them already closing shop, according to a new study by a 29-member coalition of businesses and organisations in Asia.

The coronavirus pandemic has exacerbated the woes of about 96 per cent of the country’s social enterprises, which have seen “moderate to severe downturn” during the height of the outbreak from March to April, according to the research, titled Inclusive and innovative pathways to Covid-19 recovery: Social entrepreneurship as strategy in leaving no one behind and building back fairer in the Philippines.

A survey of 164,000 Philippine social enterprises—businesses which apply commercial strategies to tackle social and environmental problems and can operate as a for-profit or not-for-profit—revealed that more than 30 per cent had no income, while 29 per cent had sales fall by over 50 per cent.

The maturity of a company prior to the pandemic determined its resilience, said Lisa Dacanay, founder of the Institute for Social Entrepreneurship in Asia (ISEA), which led the study.

“The finding that we had, was that those who were already sustainable had diverse income sources and already were in digital transformation even before the pandemic, were those who tended to be…survivors of the crisis,” Dacanay told Eco-Business. 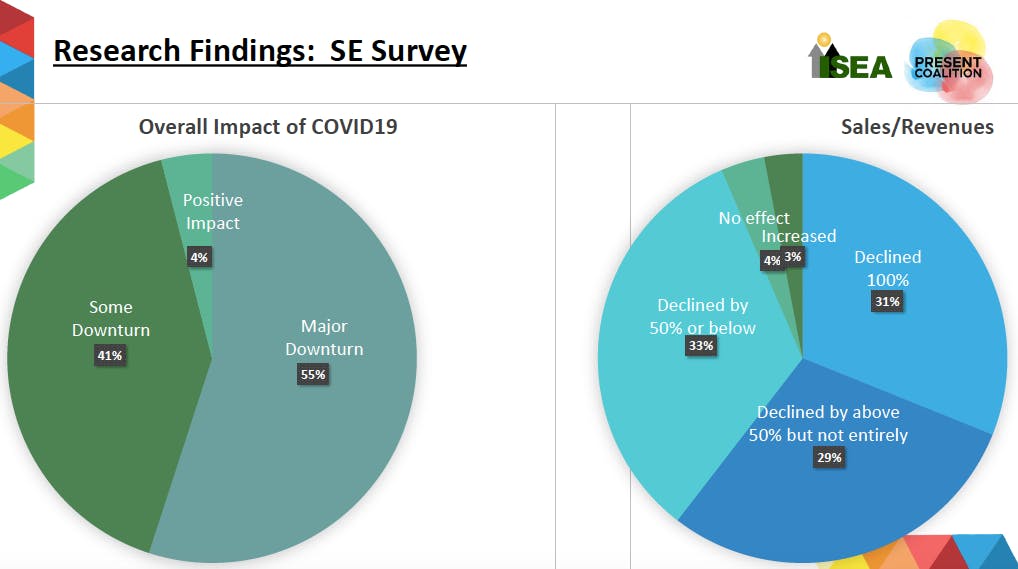 Dacanay, a veteran social activist, said businesses that had partnerships with other institutions like trade organisations and the government were able to pivot more effectively to the new normal.

For instance, she said, rice traders who had agreements with local government units to buy their commodity during the lockdown even increased their sales. Farmers who did not just rely on one crop found more sources of income and were more food secure compared to others who did not.

The finding that we had was that those who were already sustainable, had diverse income sources and already were in digital transformation even before the pandemic, were those who tended to be… survivors of the crisis.

As such, Covid impacts were “differentiated” for social entrepreneurs, depending on their situation before the outbreak, she added.

Here are some social enterprises in the country that were better prepared than most.

Human Nature, a social business that produces personal care products like soap, shampoo, and cosmetics, saw its sales nosedive in April, a month after the coronavirus was declared a global pandemic.

Brand owner Anna Meloto-Wilk, who hires residents from poor communities in Quezon City and Laguna as office staff and sources raw materials from farmers in Bukidnon and Quezon province, told Eco-Business that she has had to reduce work days and impose pay cuts on the management to avoid layoffs.

What has helped the enterprise stay afloat was the fact that it was already digital, with a fully functional website and an online sales team, even before Covid-19 struck, said Meloto-Wilk. During the quarantine, the online platforms also allowed customers to support frontline workers and daily wage earners through an option for donations of food packs and hygiene kits.

To boost its digital presence further, Human Nature was able to secure a partnership with e-commerce firm Lazada a few weeks before lockdown, making their products more accesible to customers as malls remained shuttered.

Even before the coronavirus, Human Nature’s products were available online. Its online sales have doubled since the outbreak shut its physical stores and kiosks. Image: Human Nature

When transit to Metro Manila and nearby provinces was limited only to delivery of food, medicine, and disinfectants, Meloto-Wilk immediately reached out to local government units to consider them as a manufacturer of essential goods.

She had to explain to authorities, even at the checkpoints where their delivery trucks were stopped, that Human Nature also produced hand sanitisers which were deemed necessary during the health crisis.

“These days, sales are still difficult and nowhere near our sales projections. So we continue to hustle, looking for new sales channels, observing new consumer behaviours and trying our best to quickly adapt without losing the essence of who we are and the values we stand for,” said Meloto-Wilk.

Saved through innovation and a partnership with a global trade institution

Salay Handmade Products Industries, a Mindanao-based enterprise that has been creating stationery products for the last three decades, is now manufacturing face masks amid the coronavirus.

Salay’s farmers in Misamis Oriental create their masks from raw abaca fibers, which is known for its mechanical strength and resistance to saltwater damage. According to a test conducted by the department of science and technology, the face masks have a filtration rate seven times better than cloth masks and have lower water absorption than the N95 mask. They are also biodegradeable compared to disposable masks which are not. 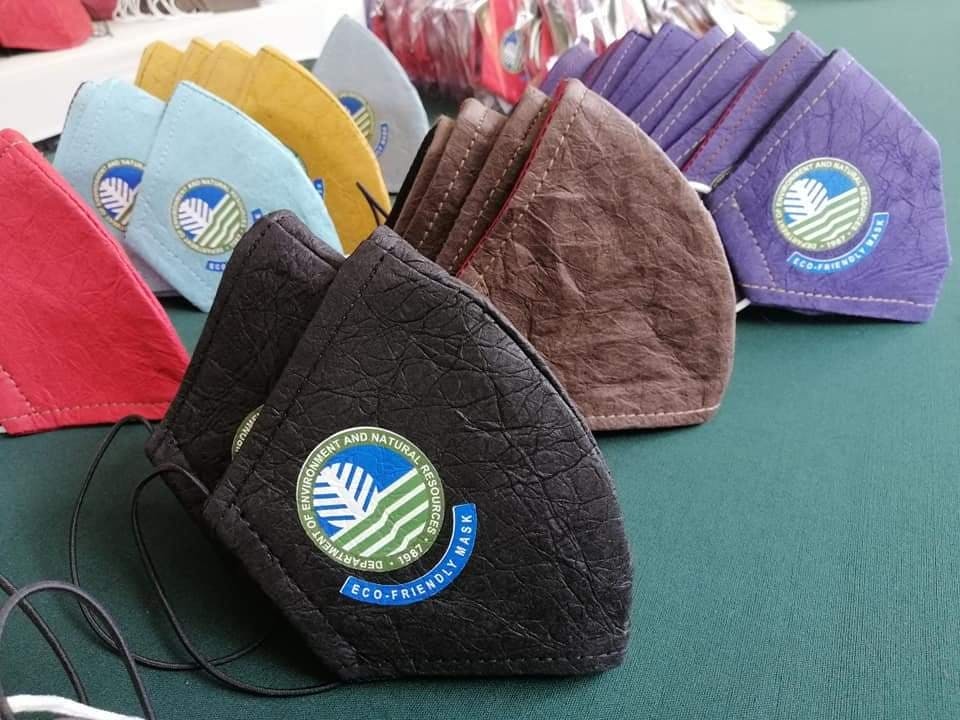 The Philippines’ department of environment and natural resources was one of the first buyers of Salay Handmade’s abaca masks, ordering 1,000 pieces for its frontliners. Image: Salay Handmade

The enterprise shifted to mask manufacturing when it heeded the call of the World Fair Trade Organisation Asia (WTFOA) for its 140 fair trade organisations in 20 countries in the region to produce personal protective equipment, merely a day after world health leaders declared the coronavirus a pandemic.

Jerome Montemayor, executive director of WFTOA, said in a webinar that as early as March, the organisation learned that one of its members in India was already producing three-layer surgical masks, mainly in response to environmental pollution.

WFTOA, which aims to improve the livelihood of economically marginalised producers in Asia, sprang to action by setting up online training sessions on face mask making for other members, with the help of the Indian company.

Salay Handmade was among the “leaders of the pack” in pivoting its business and finding innovative and environmentally friendlier solutions, Montemayor said.

Although its sales this year are not expected to increase, it does not have to lay off any of its 120 employees. More than half of WFTOA’s other members in the craft sector are projecting a negative outlook this year, Montemayor said.

Farmers in Negros in the Visayas region are normally hesitant to plant anything but sugar cane. After all, sugar has always been the top export earner in Negros, putting the country on the map as the second-largest producer of the crop in Southeast Asia.

But today, seven months into the pandemic, 10 producer organisations backed by Alter Trade Foundation, a social enterprise that supports over 700 farmers, are glad that they overcame their hesitation.

“It turned out that communities who did crop diversification were the ones least affected by the difficulties in food access due to the lockdowns. The other communities had to be assisted to claim food rations from the local government,” said Ted Lopez, executive director of Alter Trade.

By the time the Covid-19 pandemic hit, they were already diversifying their crops with rice, vegetables, fruit trees, and other root crops. 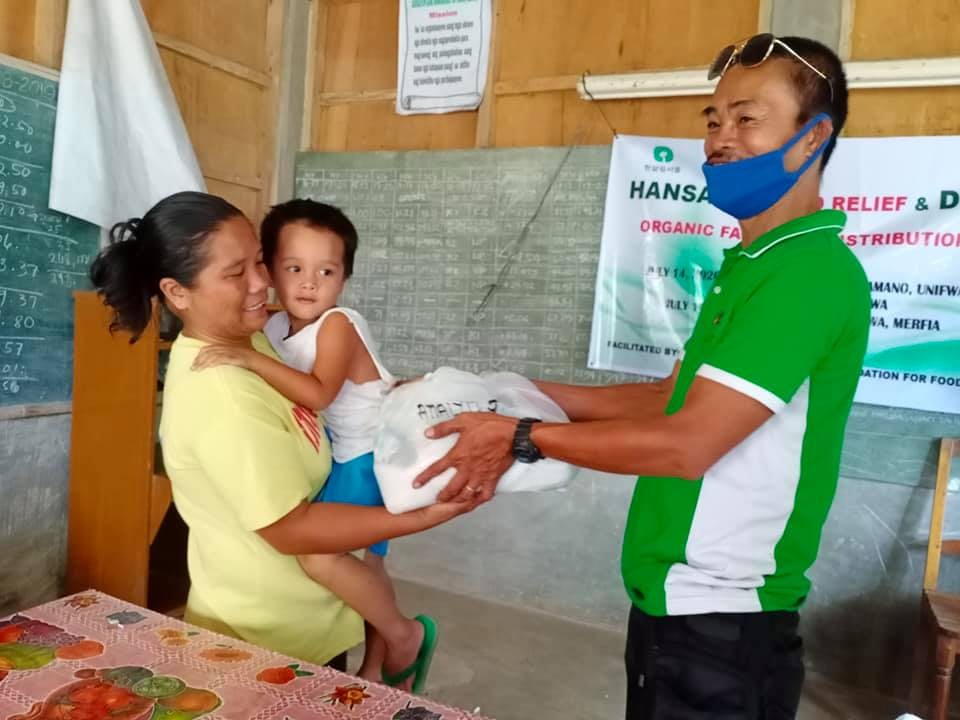 Alter Trade’s producer organisations distributed rice to communities who were not able to plant enough food ahead of the coronavirus  lockdown. Image: Alter Trade Foundation

Alter Trade Foundation tried to convince rice and sugarcane farmers to intercrop after Negros suffered rice shortages every year starting from 2007. It emphasised that intercropping of legumes and planting of fruit trees on at least 10 per cent of the farms were an important standard in sustainable agriculture.

Lopez said it was difficult to convince the farmers to diversify their crops especially after Alter Trade developed a brand of muscovado sugar that became a certified organic and export item to chocolate-producing countries like Switzerland and France. Muscovado sugar is made by crushing and cooking sugarcane juice to coax its sweetness without the use of chemicals.

The farmers came on board after Lopez made diversification compulsory for those who wanted to tap Alter Trade’s credit programme and free agriculturist services.

“For sure, our partner farmers would have much difficulty (during the lockdown) if we did not have foresight. Our community enterprise would not have been able to operate,” Lopez said.