How can the BRI better protect biodiversity?

With research showing the impact of infrastructure projects in Southeast Asia, experts call for the protection of ecosystems to be taken into account during BRI planning.

In 1939, a population of orangutans was found in the Batang Toru jungle in South Tapanuli on the Indonesian island of Sumatra. They were thought to be Sumatran orangutangs, but in 2017 scientists discovered they were an entirely new species – the Tapanuli orangutan.

Five years earlier, in 2012, Indonesia had announced a US$1.6 billion hydropower project on the Batang Toru River. Some local jungle has since been cleared for the project, which is due to be completed in 2022. This has left the Tapanuli orangutan population, already critically endangered due to habitat fragmentation, facing complete collapse. In June 2018, 25 leading environmentalists wrote to Indonesia’s president, Joko Widodo, calling for a halt to further development in the area.

Chinese financial institutions and businesses have prominent roles in the Batang Toru hydropower project, which is part of China’s Belt and Road Initiative (BRI). It is just one example of the impact the BRI is having – or could have – on biodiversity.

This was highlighted in a paper from Malaysian, Burmese, Chinese, Australian, British and American scientists published in the academic journal Biological Conservation in July this year, which analysed the possible impact of planned BRI projects on biodiversity in Southeast Asia.

Based on their findings, the researchers called for BRI planning to take connectivity of ecosystems into account, and for the creation of “ecological corridors” to connect otherwise isolated flora and fauna.

China proposed the BRI, an international economic belt inspired by the ancient Silk Road, in 2013. It covers the Chinese mainland; Southeast Asia; central, northern and western parts of Asia; Africa; South America; the coasts of the Indian Ocean and the Mediterranean; and Pacific nations. Its main aims are to boost infrastructure construction and develop new economic partnerships.

The initiative has led to the construction of roads, railways, oil pipelines, ports and power stations in nations associated with it. According to the World Bank, BRI investment has now reached around US$575 billion. But despite the Chinese government’s insistence it will create a “Green Silk Road”, the environmental impact of many projects has caused controversy. This includes effects on ecosystems and their biodiversity.

Southeast Asia is a region rich in biodiversity. Home to many unique species, four of the world’s 34 “biodiversity hotspots” are to be found here.

The Biological Conservation paper pointed out that building infrastructure – particularly “linear infrastructure” such as roads and railways – can often harm or destroy the habitats of animals and plants around the construction area.

They can also cause habitat fragmentation, which divides and isolates populations, sometimes leading to the decline or disappearance of species. Worse, roads and railways make poaching and illegal resource extraction easier, and make the arrival of invasive species more likely. Accidental deaths, such as while crossing roads, also become more frequent.

The researchers found BRI road and rail projects (including both new construction and upgrades) cut through 21 protected areas in mainland Southeast Asia, half of which are protected for their biodiversity. 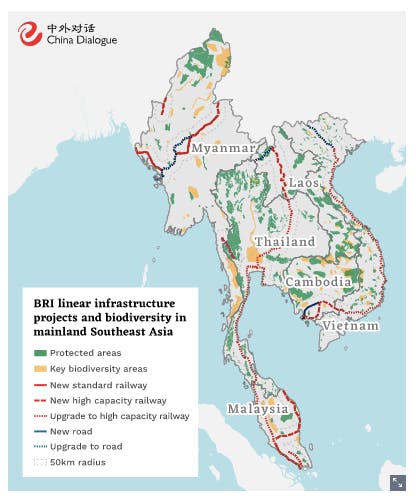 Railway lines are having the biggest impact, affecting eight of those protected areas. New railways are commonly built in relatively undeveloped regions, where they represent a greater threat to biodiversity. Some of Southeast Asia’s last remaining original forests are threatened by roads and railways that are either planned or under construction. For example, Thailand’s Dong Phayayen-Khao Yai Forest Complex, a UN World Heritage site, is less than 25km from BRI linear infrastructure.

The 25km measure is not a random one. The researchers assessed the impact of road and rail projects within four distances: 1km, 5km, 25km and 50km. They found that within 25km, there is a greater likelihood of poaching, accidental deaths, noise pollution and habitat destruction, and impacts increase with proximity to the site of a project.

The news is no better at sea, where the researchers found that BRI shipping routes can have a destructive impact within a wider radius of 50km. Twenty protected areas and 16 key biodiversity areas are affected. 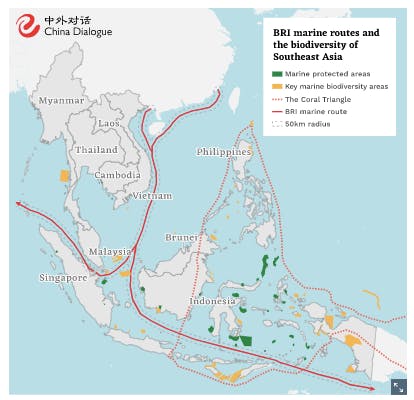 Although the economic development that the BRI projects promise to promote is often welcomed, it’s clear that finding ways to reduce their impacts and protect ecologies is an urgent matter for all those involved.

One feasible approach is to increase funding for BRI projects to allow for spending on “ecological infrastructure” that will mitigate their impacts.

Binbin Li of the Environmental Research Center at Duke Kunshan University and one of the authors of the paper, told China Dialogue: “There are many types of ecological infrastructure. For example, if you’re building a road, you could create an ecological corridor, or you could establish biodiversity monitoring stations to allow for better evaluation of the impact of ongoing construction.”

“These things need investment. With the support of funding, we can shift our infrastructure construction from focusing only on the economy towards becoming sustainable and green. When designing infrastructure, we must consider the integrity of ecosystems and the protection of endemic or endangered species, by doing things like designing corridors that allow for the movement of species. These things should be part of the planning stages, when avoiding key locations could also be considered,” she added.

In 2016, China’s 13th Five Year Plan for the environment called for the construction of ecological corridors as well as a biodiversity protection network to boost stability and “ecological services” from various types of ecosystem. In August this year, the China Council for International Cooperation on Environment and Development (CICCED) put forward a raft of policy proposals for the Chinese government.

It suggested that ecological corridor targets, based around ecological red lines and protected areas, be included in the post-2020 framework for the UN Convention on Biological Diversity. China is due to host the 15th Conference of the Parties to that convention next year.

Including measures like ecological corridors when planning infrastructure is bound to increase costs. Making sure developers are willing and able to bear the extra expenses is therefore key.

Bai Yunwen, director of Greenovation Hub, follows green finance and investment topics. She told China Dialogue that measures like ecological corridors can have such significant economic, environmental and social benefits that they are investments worth making. She pointed out that when projects could take these measures but face a competitive marketplace that makes extra costs untenable, a blended finance approach can be taken, with development or philanthropic finance added to the usual commercial investment.

She also pointed out that while the Asian Development Bank, World Bank and Asia Infrastructure Investment Bank (AIIB) all have established environmental and social safeguards in place, Chinese financial institutions lack experience in these fields and need to catch up.

“Almost all of the main Chinese banks have set up environmental due diligence processes. But they mainly rely on traditional environmental impact assessments, and don’t have the capacity to identify or manage cross-border, cross-sector and long-term environmental risks. Multilateral financial institutions and international organisations have plenty of tools that can be used to identify regional biodiversity risks, but in general, Chinese banks don’t use these,” she said.

A clear example of this lack of attention to wider environmental risks is the Batang Toru hydropower project, which has caused a huge amount of controversy both within Indonesia and overseas. In March 2019, the Bank of China stated on its English-language website that in response to the concerns of environmental groups it would “evaluate the project very carefully and make prudent decisions by duly considering the promotion of green finance, the fulfilment of social responsibility as well as the adherence to commercial principles”.

Although the Chinese government has already issued a number of documents on building a “Green BRI”, these mostly only offer guidance. They are neither binding nor specific enough to be implementable. For example, a 2017 document on creating a Green BRI mentions protection of biodiversity three times – but provides no specific measures.

Similar issues are seen in other documents on management of overseas corporate investments, on green credit, and on environmental protection in overseas investments. Fuzzy language about what “should” happen and what is “encouraged” or “focussed on” make it next to impossible for the government to exercise oversight.

According to Bai, “these documents are toothless”. “Current policy and guidance isn’t binding on institutions and companies, and there are no sanctions for breaches,” she said. But she added that Chinese companies are sensitive to policy, and implementation of existing policies would be an important way of promoting biodiversity protection in BRI nations.

While biodiversity may be overlooked in China’s overseas financial activity, the country is engaged in scientific cooperation with Southeast Asian nations. The Chinese Academy of Sciences has established a number of overseas branches working on biodiversity protection, such as the Southeast Asia Biodiversity Research Institute.

The institute is run by the Chinese Academy of Sciences’ Xishuangbanna Tropical Botanical Garden. Originally founded in Myanmar in October 2016, it also has a branch in Vientiane, Laos. The institute has carried out a number of joint surveys in mainland Southeast Asia, covering Myanmar, Thailand, Vietnam and Laos and discovering over 150 new species.

Research into the flora and fauna of Southeast Asian nations is often limited due to their under-developed economies, a lack of technology and a shortage of scientists focusing on biodiversity. To help address this, the Chinese government has set up scholarships to help talented students from BRI nations study for master’s and doctorate degrees at the Chinese Academy of Sciences.

Binbin Li welcomes these measures by the Chinese Academy of Sciences. “I’d like to see more similar things happen,” she said. “But there still isn’t much research going on in Southeast Asia, where things got off to a later start than in the US and Europe. So there’s still plenty of opportunities for Chinese researchers to work there and cooperate with local researchers. On-the-ground data can then better support China’s overseas investments.”