With the Covid-19 pandemic driving up government debt across many nations, there are growing calls for 'debt swaps' to be used to help developing nations achieve a 'green recovery'.

This week, two separate research teams from the US and China have called for China in particular to implement such “debt swaps” in exchange for efforts by developing nations to increase nature conservation, as well as climate adaptation and mitigation.

The researchers conclude that by implementing such debt swaps, China could not only help to relieve fast-spreading indebtedness in the developing world, but also provide precious finance to countries that are vulnerable to both climate change and environmental degradation.

The first study is a policy brief entitled, “Debt-for-nature swaps: A triple-win solution for debt sustainability and biodiversity finance in the Belt and Road Initiative (BRI)?”

The study is published by IIGF Green Belt and Road Initiative Center (IIGF Green BRI Center) of the International Institute of Green Finance (IIGF) at Central University of Finance and Economics of China (CUFE), a renowned Chinese university based in Beijing.

The policy brief argues that “debt-for-nature” could be a “win-win-win” solution for China as the creditor, as well as debtor countries in the BRI, which China launched in 2013 to invest in infrastructure projects across dozens of developing countries and later expanded to a total of 140 countries.

The researchers found debt-for-nature swaps “an important tool” to address three severe challenges, as they could facilitate debt sustainability in the current debt crisis, support post-Covid green recovery and promote sustainable development over the long term.

Debt-for-nature swaps are not a new innovation. First conceptualised by the then-vice president of the World Wildlife Fund (WWF) in 1984, the first implementation was carried out in 1987 based on an agreement with the Bolivian government and Conservation International (CI), a US-based NGO.

Based on the agreement, CI purchased $650,000 of the country’s foreign debt at a discounted price of $100,000 and, in exchange, the Bolivian government set aside 1.5m hectares of buffer zones in three conservation areas.

To date, debt-for-nature swaps have been applied in more than 30 countries, with a heavy concentration in Latin America & Caribbean countries.

The restructured debt totaled $2.6bn, pouring $1.2bn into conservation projects in debtor countries, according to UNDP.

“The higher infrastructure spending and Covid-19 have given ‘renewed opportunity’ for debt-for-nature swaps, especially in the BRI countries.” says the policy brief. 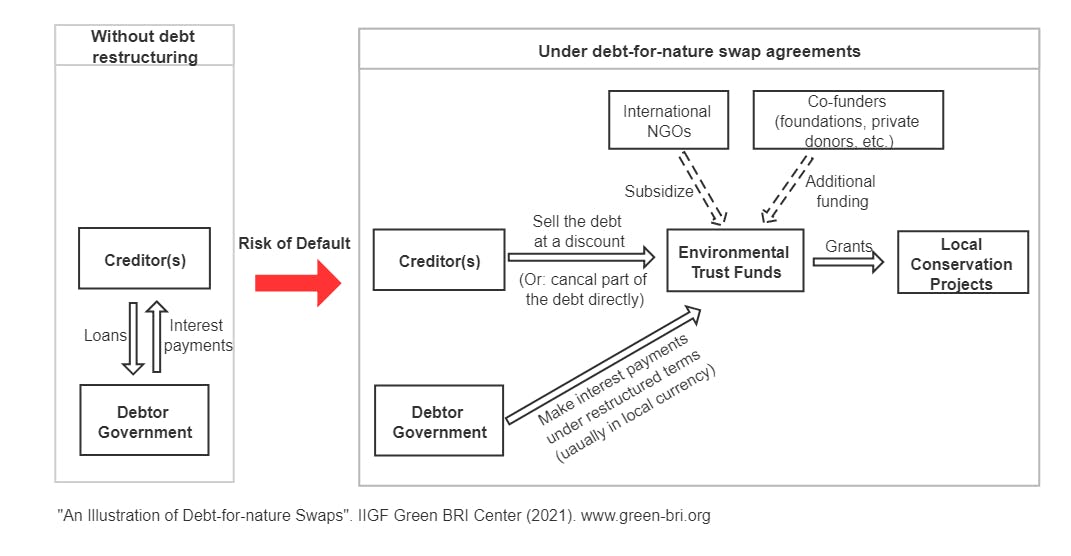 Debt-for-nature swap provides a very different direction to deal with debt issues. Unlike debt-forgiveness, it ensures certain payback for the creditor country and could avoid moral hazards.

Dr Christoph Nedopil Wang also tells Carbon Brief, “Contrary to debt-for-equity and debt-for-resources swaps, which seizes assets and limits the future growth of the debtor countries, it could make sure that the debt-payments are invested in domestic projects that protect the environment. The long-standing challenge, however, is how to identify which countries are eligible for the debt-to-nature swaps.”

The second study, “China can help solve the debt and environmental crises”, has been published in Science by the Global Development Policy Center (known as GDP, but to avoid confusion with gross domestic product it will be referred to here as GDPC) of Boston University. It attempts to respond to the exact challenge outlined by Dr Christoph Nedopil Wang.

The GDPC researchers examine “the promise of Chinese debt swaps” with its debtor countries through a matrix that, for the first time, incorporates a country’s vulnerability to climate change and/or biodiversity threats with the conventional criteria of “creditworthiness”, as well as implementation and management costs.

The study identifies a number of countries that would have the most opportunity of success, if such swaps were to be implemented by China. Countries include Laos, Uganda and Ecuador, as the map below shows.

The “opportunity of success” is a key contribution of the study, says Dr Blake Alexander Simmons, a GDPC postdoctoral researcher and lead author of the study.

Specifically, the study measures the “political will” through the percentage of renewable investment costs (associated with their existing “nationally determined contribution” commitments under the Paris Agreement) against their national GDP.

The higher the political will is (a percentage higher than 5.5 per cent), the higher the “opportunity of success” is identified for debt-for-climate swap.

The study finds Sengal, Sudan and Zimbabwe to have the highest potential for debt-for-climate swap.

This is due to their relatively high carbon emissions and significant climate vulnerability, as well as the higher “political will” – namely, the percentage of renewable energy commitments compared to their GDP is 15-39 per cent.

As to debt-for-nature swap, natural capital is the key criteria. Researchers consider the “opportunity of success” is reflected in the potential impacts of natural conservation projects, prominently in preventing deforestation.

The study identifies Angola, Cambodia, Myanmar and the Solomon Islands (purple) as countries with the “greatest promise” for debt-to-nature swaps.

Angola, in particular, stands out for its severe indebtedness (a total of $29.6bn, or 31 per cent of its GDP), the significant potential to protect pristine habitats (nearly 91 per cent of remaining intact areas are not yet under protection), and to reduce tree cover loss (it has experienced 5.2 per cent of tree cover loss since 2000).

In addition, the researchers suggest exploring pilot programs in smaller countries, such as Fiji and Togo.

When viewed together, they say the small carbon footprint, extremely high concentration of threatened species, and minimal existing protection of the remaining habitats of these two countries would make such debt swaps a lower-risk practice.

The two new studies add to the growing debate about how to develop new solutions to solve the triple crises of debt, climate change and biodiversity loss, with talk currently focused on a “green recovery” from the Covid-19 pandemic.

In September 2020, the International Institute for Environment and Development (IIED) provided one of the first proposals on using debt swaps to address debt, climate and nature loss in the post-Covid era.

Additionally, a joint policy proposal from Heinrich Böll Foundation, SOAS Center for Sustainable Finance and the GDPC published in November 2020, amplifies the notion further, urging global creditors from the public, private and multilateral institutions to include debt-for-climate or “debt-for-sustainability” swaps as one of the three pillars of a “reformed debt relief framework”.

Another similar proposal has been suggested by the World Resource Institute (WRI), a US-based thinktank, which brings in “health” as a dimension of the “climate-health-debt swaps”.

All these variations of “debt swap” are fundamentally similar: namely, they provide the debtor countries an opportunity for “green development”, rather than being trapped in a vicious cycle with unpayable bills that limit the “opportunities” for nature conservation, as well as climate adaptation and mitigation.

For example, Fiji is already seeing a 32 per cent decline of government funds allocated for climate-related projects, following a 4.9 per cent reduction in GDP in 2020.

Prof Carlos Larrea, a professor of social studies at the Universidad Andina Simón Bolívar in Ecuador, who was not involved in the above studies, thinks that starting the negotiation on debt-for-nature and debt-for-climate swaps should be a high priority for his country.

“We are at a very critical status, not just economically,” he tells Carbon Brief. “ We are talking about saving the Amazon rainforest, which would otherwise disappear in 50 years. We need to start the negotiation immediately.”

Earlier this month, 23 former central bank governors and former finance ministers from around the world published a statement endorsing the new framework proposed by the joint policy proposal. They said:

“Many developing countries are forced to deploy 30-70 per cent of government revenues to pay off international creditors rather than pursue these broader goals…This is not the time for nation-states to be forced to trade their people and futures for international debt repayments that have ballooned for reasons largely out of their control, putting action on our shared climate change and sustainable development goals on hold.”

Dr Ulrich Volz, founding director of SOAS Centre for Sustainable Finance and lead author of the joint policy proposal, addresses the emergence of the debt-for-nature in post-Covid green recovery in an email interview with Carbon Brief. He says:

“Covid-19 has illustrated in a brutal way the need to strengthen the resilience of our economies and societies and thereby reinforced the urgency to deal with environmental and climate challenges.”

Ray says such debt swaps might become “particularly attractive” when a creditor nation, or any creditor, realises that “they’re not going to get their money back”. She continues:

“Once you [the creditors] realise that ‘Plan A’ is simply not going to work, then instead of suspending the payments indefinitely and hoping that someday they [the debtors] will be able to pay you back, adopting debt-swap as a ‘Plan B’ starts to become attractive. It provides an opportunity to convert the debt obligation into a new collaborated partnership that locks in a greener, more sustainable and less volatile trajectory for both debtor and creditor nations.”

Dr Christoph Nedopil Wang says the challenge is “on the ground”, adding:“Designing and implementing a well-balanced, transparent and efficient implementation mechanism is crucial for success.”

Dr Ulrich Volz also warns of the danger of “greenwashing”, through a lack of accurate monitoring, oversight and supervision. “What is more important than the labelling is that the actions taken are meaningful and that this doesn’t become an exercise in greenwashing.” he tells Carbon Brief.

Liu Shuang, Senior Associate at WRI’s Sustainable Finance Center, who co-authored the WRI proposal, estimates that with numerous successful past experiences of debt-for-nature swaps there is a chance to see the first few negotiations starting as soon as the second half of this year. She says:

“Political will from both creditor and debtor countries are extremely crucial, as no previous debt crisis at current scale has opted for the debt-for-nature swap.”

Liu Shuang adds that, to bring the conversation forward, efforts have to be made in coordinating and consolidating the scattered conversation across different government departments.

A critical role of China

All eyes are now on China, as the country becomes the largest creditor in bilateral debts in the world, as well as ramping up its own commitments to climate action and nature conservation.

The scale of bilateral debts in developing countries amplifies the role of China as a major international creditor.

The debt owed by the ten most indebted BRI countries totalled $64.2bn in 2019 – equivalent to just 0.2 per cent of China’s domestic credit market.

In November 2020, China made its first attempt of participating in multilateral debt relief efforts by joining the G20 Debt Service Suspension Initiative (DSSI) and is currently its largest single contributor.

“For responsible creditors, [China] will be indeed better to engage constructively in debt restructuring where needed. This will deliver better outcomes than a too-little-too-late strategy,” Dr Ulrich Volz tells Carbon Brief.

Dr Christoph Nedopil Wang thinks that engaging in debt-for-nature swaps can be a “relatively easy reputation gain” for China” to showcase its commitment to conserving nature.

“However big the debts are for smaller economies, the amount of debt becomes relatively smaller for the much larger creditor countries including China, and thus much more manageable,” he added.