ADB: Asia stands to lose 68 million jobs if coronavirus is not contained in six months

The Covid-19 pandemic will threaten the employment of 52 million workers in China, while the rest of the region must brace itself for about 16 million job cuts if the outbreak goes on until September, the Asian Development Bank warned.

About 68 million jobs could be lost in Asia due to the coronavirus pandemic, the Asian Development Bank (ADB) has warned.

China will see the highest number of workers affected, with about 52.8 million workers potentially losing their jobs by the end of September in the “worst case scenario”, if the pandemic is not contained by then, according to the ADB’s Covid-19 Economic Impact Assessment Template rolled out last week. 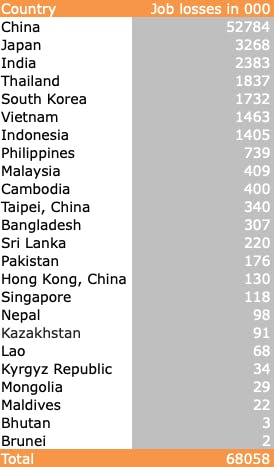 ADB’s Covid-19 Economic Impact Assessment Template  showed how many jobs would be lost by each of the 24 Asian countries surveyed, if governments fail to contain the outbreak by end of September this year.  The individual country figures tallied to a loss of about 68 million jobs. Image: Eco-Business Source: ADB

In the ADB’s worst-case scenario over the next six months, jobs in China’s transport sector could shrink by 6.53 per cent as global travel restrictions—currently affecting 550 million international trips, or 40 per cent of the global total—continue.

Hotel and restaurant workers in the mainland are also at risk as employment in this sector could dip by 6.25 per cent.

The Covid-19 coronavirus first emerged in the central Chinese city of Wuhan late last year and has spread around the world. Although China appears to be recovering, cautious consumers may continue to stay away from shops, restaurants, and other commercial establishments until the outbreak is over.

The pandemic has also affected manufacturing firms by disrupting supply chains, especially those in the automotive, electrical and electronics industries, noted the ADB in its template.

“If governments move quickly to contain the pandemic, we will see a rebound to normal. There is just a downside risk on the global and Asian economy only if pandemic is not controlled soon,” said ADB’s chief economist Yasuyuki Sawada.

Tourism-dependent economies like Thailand, Cambodia and Maldives are the most vulnerable, said Sawada. Thailand, famous for its tropical beaches and opulent palaces, stands to lose more than 1.8 million jobs as nearly one in four jobs in the hotel and restaurant sector, and one in six jobs in transportation are threatened over the next six months.

Cambodia, whose historical sites draw millions of tourists every year, may see 400,000 people losing their jobs, the bulk of them travel and hotel-related. Meanwhile, employment in the Maldives could shrink by 22,000. 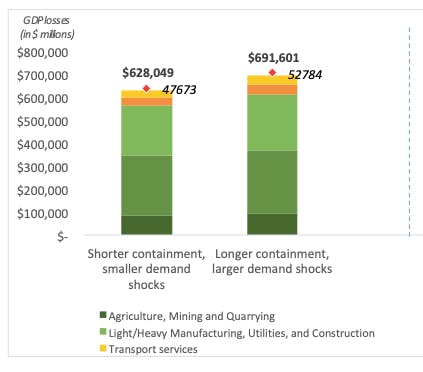 ADB’s Covid-19 Economic Impact Assessment Template shows that China stands to lose 47.673 million jobs if the virus is not contained by end of June. The worst case scenario would be if the outbreak goes until end of September, when 52.784 million jobs are feared to be at risk in the mainland. Image: ADB

What happens beyond the six-month mark?

Although the assumed range of the outbreak is three to six months based on the experience of China and South Korea, the pandemic could last longer in other countries because governments differ in their ability to respond, the Asian Development Outlook 2020 noted.

The report added: “If the scale of the outbreak increases to the extent that it infects a substantial portion of the global population, as some experts predict, the impact on public health will be significant. Even education has taken a hit as schools around the world have closed for extended periods.”

But Sawada said the chances of a global recession are “very slim” given containment efforts and rescue packages made available to developing countries.

For its part, the Manila-based multilateral bank has made US$6.5 billion available for developing member countries grappling with the virus.

For instance, the ADB had provided the Philippines with a US$3 million grant so that its department of health can buy additional medical supplies and equipment, and deliver health services.

The report also detailed how Asian governments have announced bold fiscal rescue packages to slow the spread of infection and facilitate medical support as well as compensate vulnerable households and firms for lost income.

Malaysia, for example, has so far rolled out a financial package worth about 17 per cent of its GDP to counter the economic impact of the virus on its hardest-hit residents and businesses.

In Singapore, a stimulus package amounting to 11 per cent of gross domestic product was unveiled to deal with the likely impact on the economy. The government will be ramping up existing job support schemes and helping households through cash payouts.