The road to net zero for intensive energy users

In the midst of growing populations and electricity demand and political, investor and customer pressure to decarbonise, Asia’s electricity providers continue to grapple with implementing an affordable and reliable energy transition.

This year, the demand for coal set a new record in Asia, pushing prices to record-highs. While many industrialised countries have been shutting down coal plants for years to reduce carbon emissions, in Asia — which houses half of global manufacturing — coal use is growing rather than shrinking. 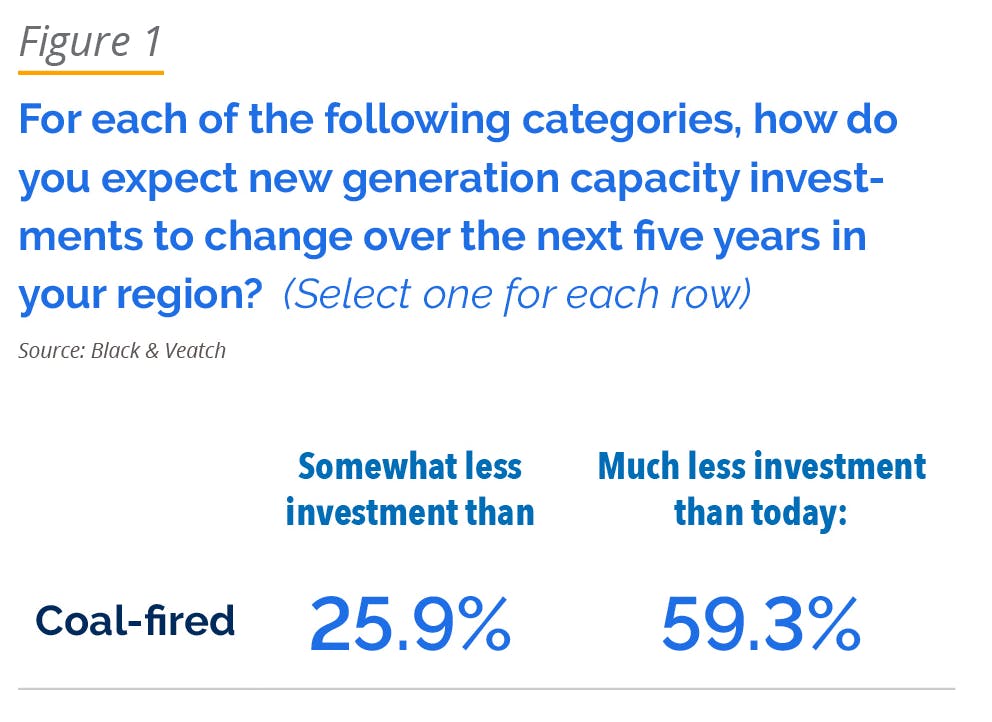 This is especially so as rapidly developing countries in the region still look to fossil fuels to meet a booming demand for power, even as investment in coal is expected to wane, according to this year’s Asia Electric Report (Figure 1).

Taken together with an increasing appetite and pressure to lower industrial carbon emissions, this points to significant change on the horizon for hard-to-abate industries in Asia that rely on huge volumes of energy. Today, most of their power needs are met through fossil fuels, but this remains their biggest hurdle to achieve net-zero goals.

Industry leaders, therefore, say that they must work closer with the electric power industry, either collaborating and influencing the development of more renewable and sustainable energy, or directly financing and building the solution.

In a survey conducted by Eco-Business and Black & Veatch, half of the respondents said that they will target Scope-2 indirect emissions from the energy they purchase in their carbon-reduction strategies.

The data centre industry in particular is looking for ways to procure renewable energy to reduce their operational carbon emissions. Reducing Scope-2 emissions, industry leaders say, has to be a key focus of future energy roadmaps. If a centre can secure 100 per cent locally generated renewable power, it would reduce its carbon footprint by 90 per cent.

Data centres guzzle huge amounts of energy to keep their operations going around-the-clock. While technology to bring about efficiencies in operating data centres to help cut carbon emissions is improving, changing where these centres get their energy from is the most impactful, said Darren Webb, co-founder and chief executive of Evolution Data Centres.

“Other factors are important. But in terms of materiality, the Evolution view is that they don’t compare at all with having a renewable power story,” Webb said.

Nevertheless, efforts by intensive energy users to decarbonise will be curtailed if electricity transmission grids are not modernised and instead remain powered by coal and natural gas power plants.

Webb is banking on geothermal power generated in Indonesia and the Philippines to help sustain his energy-hungry data centres. Straddling the seismically active Pacific Ring of Fire, Indonesia is home to 40 per cent of the world’s geothermal resources, with 300 sites identified by the government that could potentially generate 24 gigawatts of energy, although development cost challenges exist compared to other technologies.

Cementing the relationship with power generators and exploring ways to reduce or share in development costs is one approach for intensive users like data centres to access geothermal energy sources.

Webb believes that sourcing for renewable power independently, while using an existing grid structure for distribution, will trigger change in how utilities are managed and force transmission companies to cut their dependency on fossil fuels.

“When someone says I am taking 30, 50 or 100 megawatts and I am only using you for transmission, not for generation, this is a clear message from the market to transmission companies: you need to move from coal-based into renewables where you can,” Webb concluded.

New technologies that have yet to be commercialised will play an increasingly important role in meeting long-term ambitions for net-zero emissions and decarbonisation. 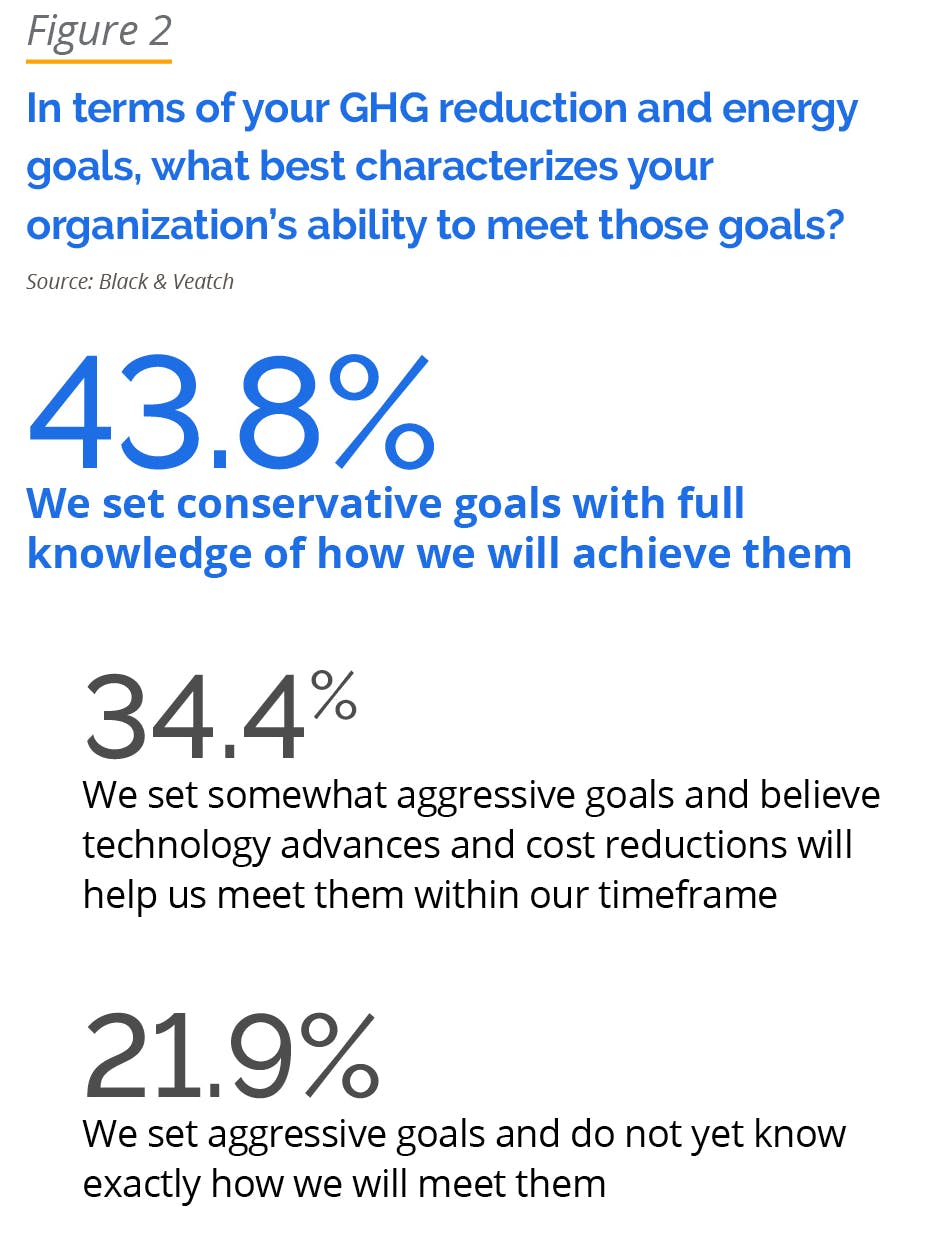 Over one-third of survey respondents said that aggressive greenhouse gas reduction goals and energy goals will be met by advances in technologies (Figure 2). They believe that these technologies can pave the way for improving energy efficiency and enable a switch to lower- carbon energy carriers. Green hydrogen and the deployment of carbon capture, utilisation and storage could be transformative.

Cement is one sector that is pinning its hopes on technology to slash carbon emissions. The majority of the carbon emitted by the cement industry comes from burning coal and other fossil fuels in the production process.

Among heavy industries, cement accounts for the largest share of energy consumption and carbon dioxide emissions. Its production is set to increase as populations balloon and infrastructure needs increase, particularly in emerging economies.

According to Ian Riley, chief executive of the World Cement Association, grid energy supply, which represents less than 10 per cent of the sector’s total energy supply, is not the primary focus for its decarbonisation plans. However, some plants have moved to wind energy, Riley said.

“A few cement companies are using directly contracted or their own renewables for power, but most use grid energy,” Riley said. Most companies today take the view that the grid will be decarbonised anyway and that electricity represents a small portion of emissions so this is not going to be a priority unless there is potential to cut power costs, which is starting to be the case.” 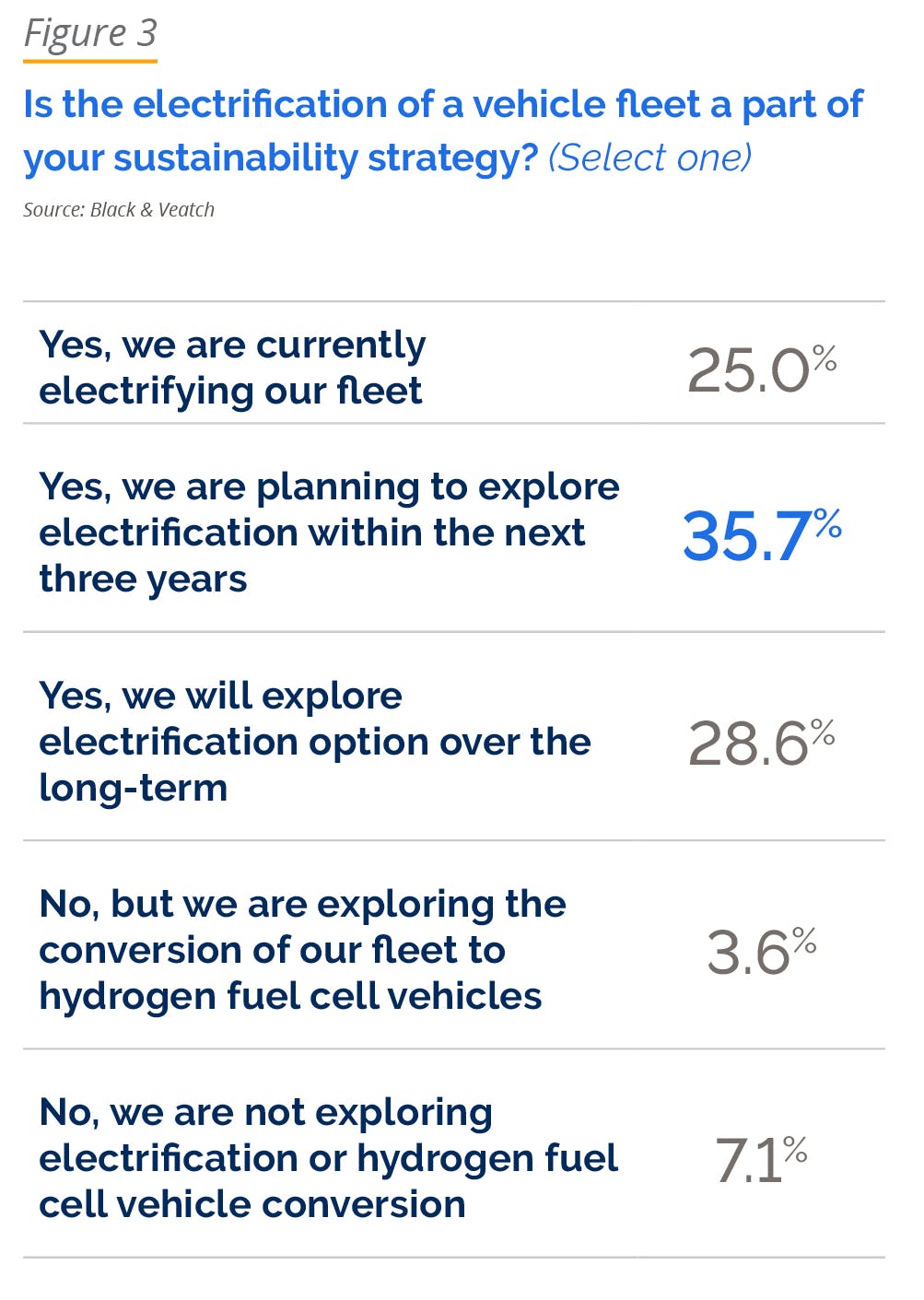 Companies also see electrifying their current vehicle fleets as part of their sustainability strategies. More than 60 per cent of survey respondents said they either are already doing so or have such plans in place (Figure 3).

Electric vehicle (EV) sales are set to nearly double the number purchased last year, according to BloombergNEF. China is spearheading this trend, with government subsidies and the mass development of infrastructure underpinning growth.

Indonesian GoTo Group, which includes ride-hailing start up Gojek, announced in April that it plans to make every car and motorcycle on its platform an EV by 2030 through partnerships with manufacturers and favourable leasing arrangements.

The Jakarta-based firm works with the Indonesian government to support the development of the country’s EV industry, according to Tanah Sullivan, Group Head of Sustainability for GoTo.

The company regularly engages in dialogue sessions with partners from across the public and private sector, as well as government ministries responsible for developing Indonesia’s roadmap to a low carbon economy, Sullivan said. Harnessing renewable energy to generate electricity for EVs will be critical to curbing CO2 emissions.

Governments and state-owned enterprises are not as agile as some private companies. This is, and will continue to be, a barrier to progress. With intensive energy users looking to technology to help reach their targets, they should be incorporating research and development into their roadmaps.

GoTo, for instance, is screening and testing some technologies that could help drive efficiencies and spur the uptake of renewables at an industry level. It plans to share its findings on the green technologies that it is testing. These include solar panels and their capability to charge EV batteries.

Options that are viable in the local context can hopefully be considered by the government. “Whether providers want to scale, for example their solar solution, or sell the technology to private or public sector firms, both require a multi-stakeholder approach so we can accelerate our country’s energy transition journey,” Sullivan said.

Sullivan said that while the Indonesian government is working on a plan to transition away from fossil fuels, firms should try to align their roadmaps with government targets and programmes.

“We are trying to align with the Science Based Targets initiative and the carbon disclosure project (CDP) because we want to best assess what these are going to look like. In our context, it’s relatively new. We are also operating in an emerging market.” she explained. “It is still a balancing act between economic progress and the right for the country to have access to electricity that is affordable.” 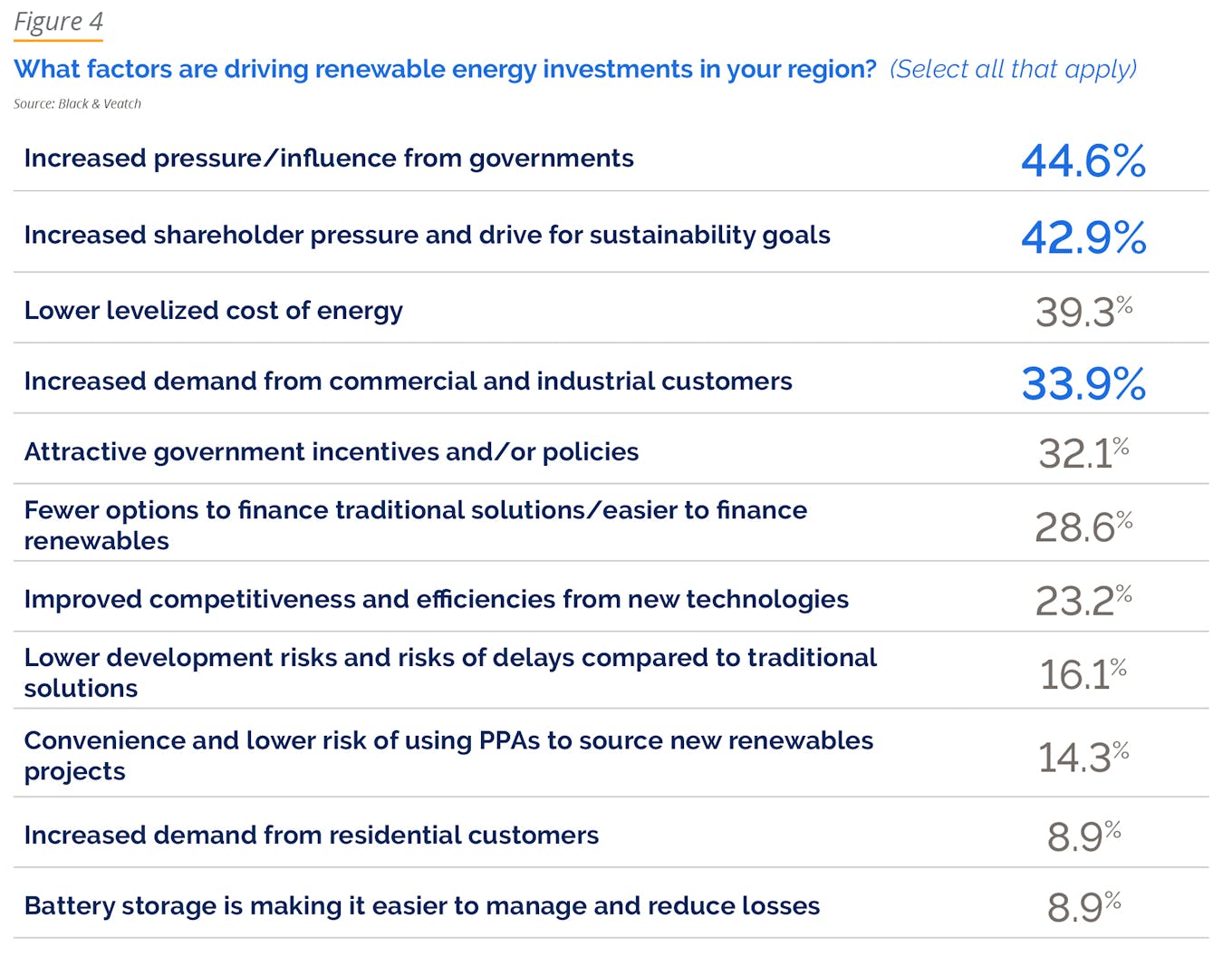 Pressure from consumers and investors is driving companies to find ways to slash emissions and this is expected to exert more pressure on energy providers and transmission networks (Figure 4).

“It is going to become a mandate from our customers,” Webb said. Cloud providers in the United States such as Google, Microsoft and Amazon Web Services have set aggressive sustainability targets, creating a ripple effect further down the supply chain onto data centres like Webb’s.

“While there’s an option for where you source your power today and how sustainable you can be as an operator, I feel that the option is going to disappear in less than two years’ time,” Webb said.

For most intensive users, changes are being enacted in anticipation of tighter regulations on emissions in the future. Less nimble operations could be left with stranded assets that become obsolete amid changing consumer demands.

Investors and asset managers also are looking for transparency and better disclosure about how large a company’s carbon footprint really is. An increasing focus on declaring Scope-3 emissions — the indirect emissions that occur
in a company’s value chain — is likely to see large energy consumers press providers to drive down their emissions. 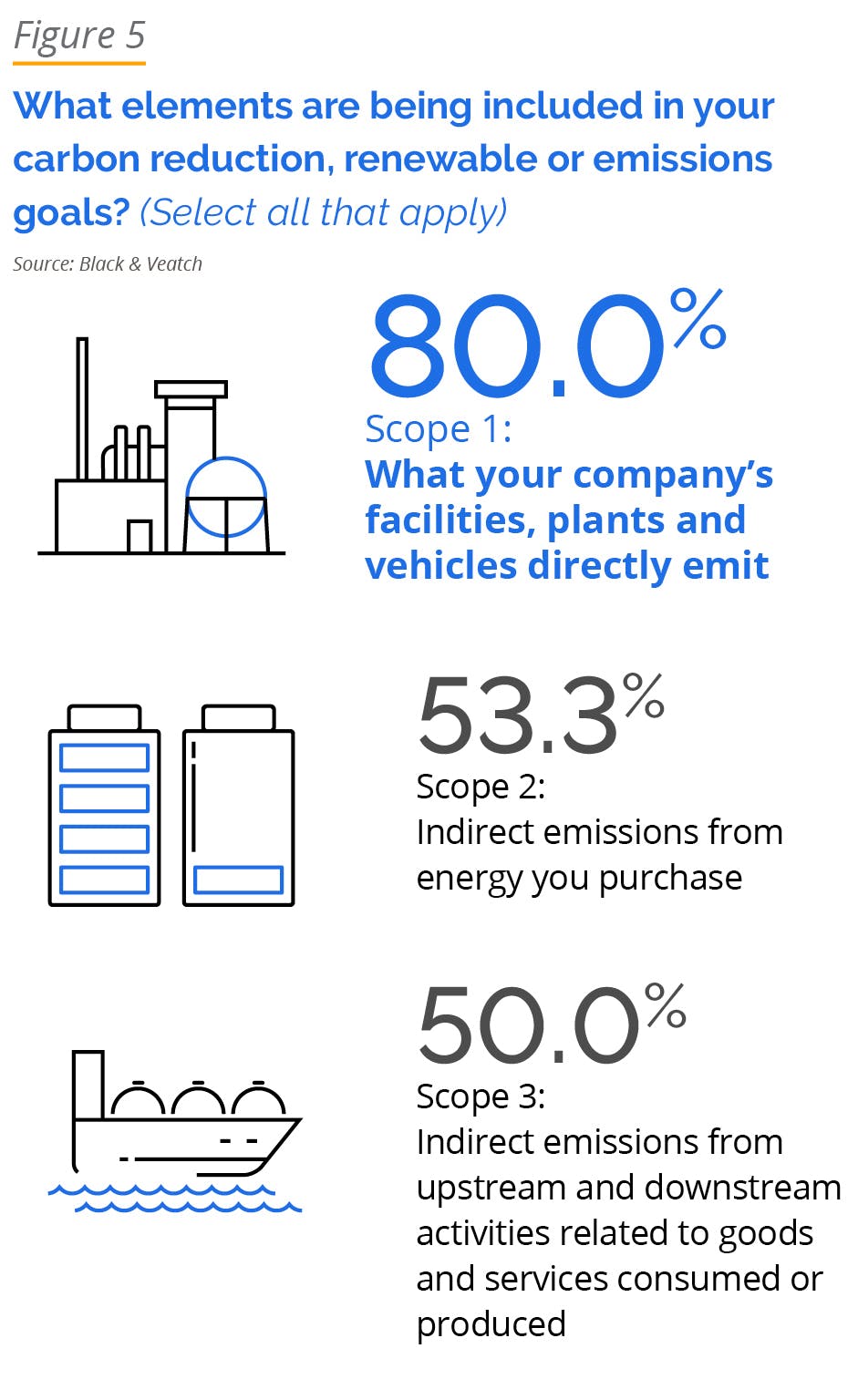 Although many organisations have made decarbonisation pledges, they lack the strategic roadmap that will guide them to the goal.

The most important and productive first step that any organisation can take is to create a decarbonisation roadmap, Black & Veatch stresses.

According to its 2021 Corporate Sustainability, Goal Setting and Measurement Report, more than 80 per cent of companies surveyed with revenues greater than US$250 million have set decarbonisation goals, yet 25 per cent have set goals at such a level that they are unsure how they will meet them.

Over 40 per cent of respondents to our survey said that they do not have a decarbonisation roadmap, with about one third with a roadmap in place for only the next five years (Figure 6). 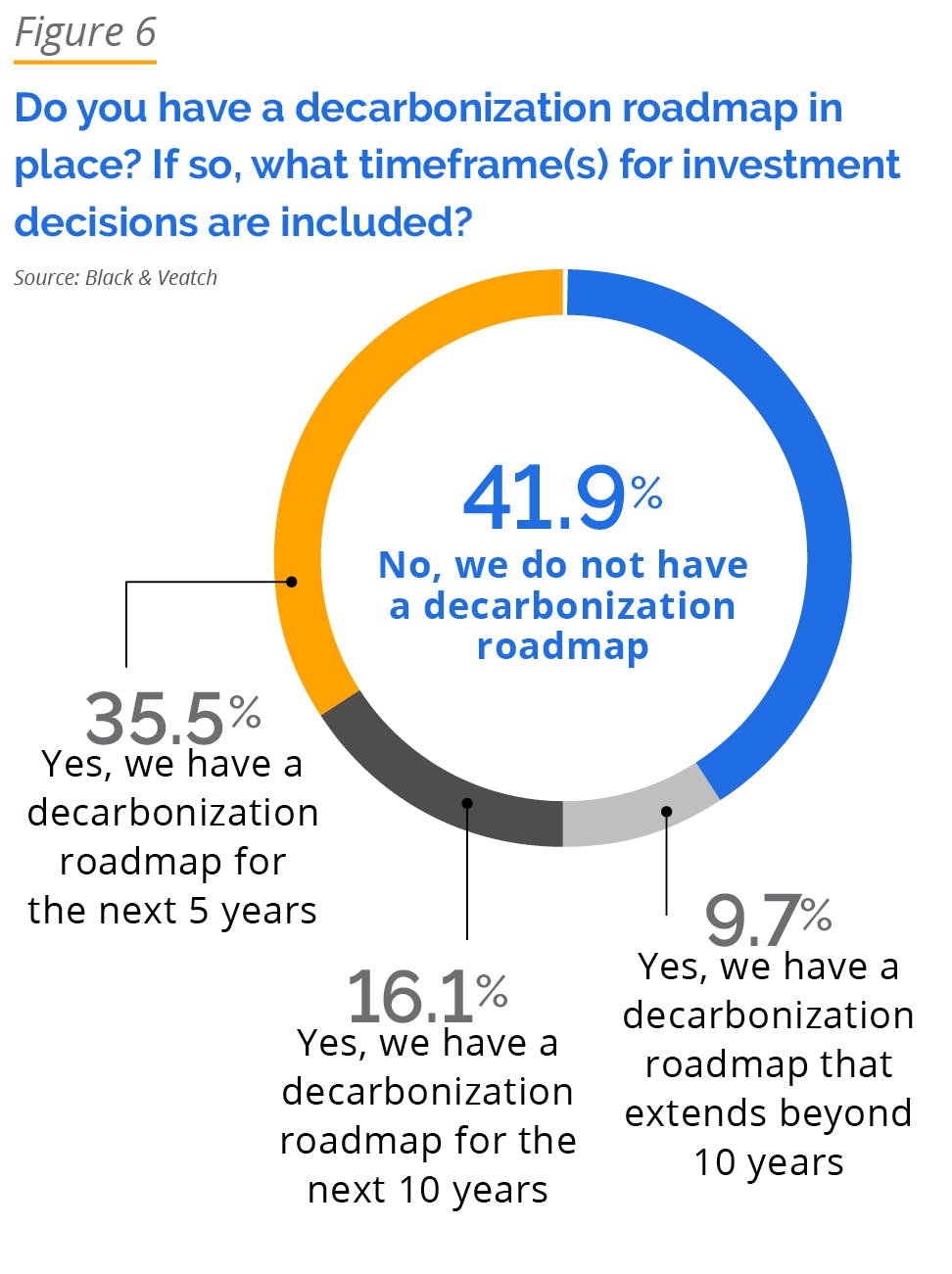 Generally, effective roadmaps should be plans that look beyond 10 years, Black & Veatch advises. This roadmap blind-spot is perhaps symptomatic of a region still figuring out how to wean itself off fossil fuels. For some companies operating in fossil-fuel dependent countries, the challenges seem insurmountable.

Accept the uncertainty and be adaptable, Black & Veatch urges in its report. “This approach avoids analysis paralysis in the face of demanding decarbonisation targets.”

Backed by surveys of the electric industry and large electric users in Asia, the Black & Veatch 2022 Asia Electric Report reveals the single biggest challenge the industry is facing: integrating renewable energy to maintain a resilient and reliable grid. Download the report here.