In a region with the highest levels of malnutrition, how can a new wave of food and agri-tech entrepreneurs bring about nutritious foods for consumers in Asia?

What if technology could not only make food more appetising, but also affordable and more nutritious?

The use of technology to improve agricultural and food supply chains and deliver healthier food products is only beginning to gain traction in Asia, but recent innovations have shown that technology can be a serious force for good. Ground-breaking innovations such as lab-grown meat, farmed insect protein and 3D food printing are offering solutions to malnutrition and food insecurity by transforming the way food is prepared and consumed.

Last year, 3D food printing was hailed as a “revolutionary concept” that could address the world’s nutritional challenges by allowing better control over the nutritional content of food. Although researchers have warned that engineering large portions of diets through 3D printing might increase the risk of hidden malnutrition, the technology has been touted as a game changer for people with special dietary needs such as vegetarians and diabetics. It has also been offered as a solution to meeting food demand during humanitarian emergencies or in crisis areas.

“Food technology coupled with the study of nutrition and medicine can really help improve nutrition for people,” says Verleen Goh, chief technology officer at Singapore start-up Alchemy Foodtech, which has developed a technology called 5ibrePlus that lowers the glycaemic index (GI) in carbohydrates such as white jasmine rice, bread and noodles. Foods with a low GI rating cause a slower increase in blood glucose levels, which is especially important for people with diabetes.

Another food modifier suitable for diabetics is Reducose, produced by British life science company Phynova, which can be added to food and drinks. It prevents the body from turning carbohydrates into glucose, without altering the taste and appearance of staple foods.

According to Goh, even though there are greater barriers to accessing nutritious food in developing countries, hidden nutrition deficiences are common in the developed world, which can increase the risk of developing Type 2 diabetes.

Singapore has the second highest proportion of diabetics in developed countries, after the United States.

In Asia, rising urbanisation has also altered the consumption habits of its growing middle-class, replacing traditional foods with cheap, nutrient-poor foods that contribute to increasing levels of obesity. 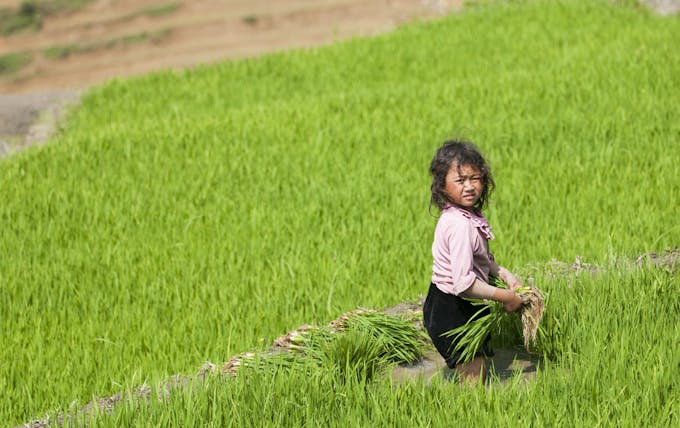 A young girl works in a rice padi field in Vietnam. About 1.6 billion people worldwide suffer from anemia, one of the symptoms of a global nutrition crisis that disproportionally affects women. Image: AHMAD FAIZAL YAHYA / Shutterstock.com

“Asia must find its own solutions to tackling obesity and diabetes, which are unique to regional needs,” said Rama Raja, vice president of DSM Science and Innovation. “We should give importance to good nutrition education to shift consumer behaviour and forge genuine collaborations in science.”

Producing food in a nutrient-scarce future

The most catastrophic impacts of climate change are on the horizon. As changing weather patterns impact global crop yields—even depleting nutrition levels in food staples such as rice, vegetables and legumes in certain predicted scenarios—malnutrition could become a more widespread problem.

“Simply said, food has become less nutritious over the last few decades and there are factors behind this, other than soil depletion, that are linked to climate change,” says Isabelle Decitre, chief executive officer of ID Capital, a venture capital firm with a focus on food and agri-tech business in Asia. “Increasing levels of atmospheric carbon dioxide are also to blame.”

But new agri-food technologies are working to ensure supply chains become more climate resilient and continue to provide the world with nutritious food.

Integrating Innovopro’s protein concentrate into food items such as yoghurt, pudding and vegetarian patties could be “a real solution to world hunger,” especially because such foods make people full faster and chickpea farming is less resource-intensive than other plant-based proteins, she adds.

In Japan, research and development firm Mebiol came up with technology that makes it possible to grow plants on film using only liquid fertiliser and small amounts of water. Professor Yuichi Mori was inspired to create a film farm after realising that his research on hydrogels could be applied to growing plants in areas of Japan where soil had been contaminated by radiation from the Fukushima Daiichi nuclear disaster and tsunami in 2011.

Mebiol tomatoes are now being cultivated through this new film farming technology in the Dubai desert, one of the world’s most inhospitable places for agriculture. Analysis has shown that tomatoes grown this way have the same nutritional value and, despite being grown without soil, are much sweeter.

The way food is perceived matters

What technology has going for it is the potential to formulate more nutritious products without compromising taste or requiring people to change their eating habits. This is especially crucial in Asia, where people have pre-conceived notions and attitudes towards food, says Goh.

She points to the low public acceptance of brown rice in countries such as China and South Korea for example, where the rice variety is associated with diet of the rural, low-income class.

“We wanted to preserve the texture, taste and other non-nutrient components of food while improving its nutritional profile,” says Goh, who adds that these factors are the most important in helping people in Asia adopt healthier eating habits.

Alexia Cron, regional lead, DSM Nutrition Improvement, says fortifying staple foods, such as rice, with vitamins and minerals, can be done while maintaining their look and taste, so people do not have to change their cooking or eating habits while still improving their diets.

Mandatory fortification of staple foods is practiced in many countries, including Indonesia and the Philippines. While flour fortification is more common, fortifying rice to address nutritional deficiencies is gaining momentum. The World Health Organization has recommended rice fortification as a public health strategy since 2018 “to improve the nutrition status of populations, where rice is a staple food.”

“In our case, we are lucky that chickpeas have been known and eaten by different cultures for 3,000 years,” says Innovopro’s Nechushtan about consumers’ response to products infused with chickpea protein. “The chickpea has now gained even more popularity in Europe and California as a superfood.”

Goh believes that new products can be accepted much more easily if it fits into people’s culture and habits. “The stories behind food drive people to eat a certain way.”