Obesity is growing in Asia due to changing diets and lifestyles, while many more in the region remain without access to safe and nutritious food. What can be done to fix the imbalance?

In Indonesia, one of Asia’s most populous countries, almost 3 million children are dangerously underweight from acute malnutrition. Meanwhile, more children in the country are growing fatter, with obesity levels increasing from 18.8 to 26.6 per cent over 10 years, according to data from the Ministry of Health.

Indonesia is not alone. According to Unicef’s Regional Report on Nutrition Security in ASEAN, although children and pregnant mothers are especially vulnerable to a lack of healthy foods, whole populations across the region are suffering the double burden of malnutrition, which is when under- and over- nutrition exist at the same time.

Over the last decade, Indonesia’s Southeast Asian neighbours have similarly undergone significant economic growth and made progress in reducing poverty, leading to more cases of overnutrition. Obesity rates in countries such as Malaysia and Thailand have more than doubled since the start of the century, with rising urbanisation, the growing popularity of a Western diet that is rich in fat and sugar, and the prevalence of cheap, nutrient-poor foods to blame.

Bartholomeusz also cites greater affluence and a sedentary lifestyle due to a lack of recreational space in increasingly dense cities as contributing factors to Asia’s nutrition problem.

However, hunger continues to plague both developed and developing countries in the region, which is home to most of the world’s hungry and 70 per cent of malnourished children, who suffer its effects for the rest of their lives.

In Indonesia, the dire lack of good nutrition has impacted close to half of the country’s children. Stunting, as it is also known, results in children that are short for their age and less able to perform in school.

“Stunting does not begin only during infancy and childhood, and traces its root from the nutritional status of a pregnant woman and even before that,” said Dr Anthony Calibo, medical specialist at the Department of Health in the Philippines, which has one of the highest levels of stunting in Asia. Children who are undernourished also risk becoming obese in adulthood.

Poor nutrition goes beyond hurting the health of individuals. According to Professor Hardinsyah Ridwan, president of Pergizi Pangan, The Food and Nutrition Society of Indonesia: “The nutrition problem has an effect on the economy in the long term because it affects the cognitive development of the young and reduces their productivity, negatively leading to financial issues for their families.” 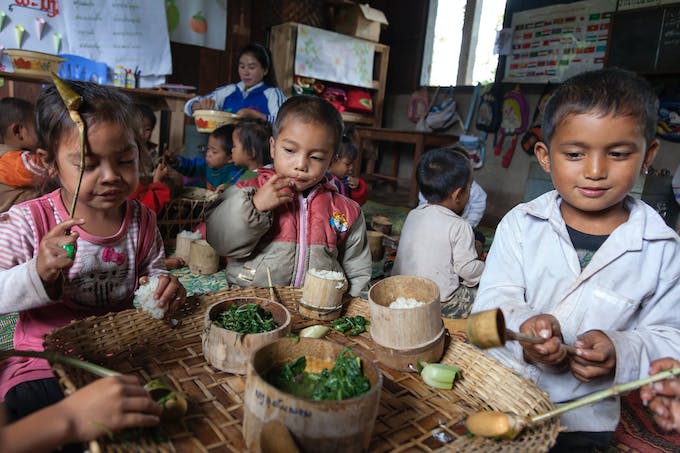 Children in Laos eating traditional foods. Food and beverage companies are responsible for 16 per cent of the world’s GDP and have a responsibility to provide good nutrition responsibly. Image: World Bank Photo Collection, CC BY-NC-ND 2.0

The poorest people in the world spend up to 70 per cent of their total incomes on food. Despite this, they continue to be most vulnerable to health conditions linked to non-communicable diseases such as diabetes and asthma because they cannot afford safe and nutritious food.

Ensuring that people in developing countries have good food is about connecting supply and demand, says Oliver Kayser, partner and managing director of global consulting firm Hystra. “Often times what we find out is that these [nutritious] products do exist. The issue is how to market the products to the people who need them the most,” he explains.

Recognising this problem, some companies are changing their business models to bring healthy food to the people who need it the most. Singapore’s biggest co-operative of cooked food providers NTUC Foodfare, which operates a number of food courts in the city-state, launched a social outreach programme called Rice Garden in 2015. It has since provided 860,000 affordable and nutritious meals to residents of low-income estates.

The issue is how to market the products to the people who need them the most.

Fortified foods are staples such as wheat flour and cooking oil that have been enriched with nutrients, and many basic commodities sold in Indonesia are fortified to provide extra boost to consumers. Two years ago, the government began a pilot project that provided fortified rice for the poor with iron and folic acid.

But Kayser warns: “One of the big dangers [of fortification] is it is seen as a silver bullet and people don’t have to have a diverse diet. What we want to do is not only have fortified food but also change the eating behaviours of these families.”

It can’t just be about health

Persuading people to change their eating habits will take more than arguments about health. Studies by The Arch Project, a research project run by Helen Keller International, found that about 80 per cent of children aged 6 to 23 months in Phnom Penh were fed commercial snacks such as doughnuts, chocolate and chips. The case is similar in Indonesia and Cambodia, where more than half of the mothers fed their toddlers commercially packaged foods that were less than ideal for development.

“Mothers of poor households have a lot on their plate and asking them to cook special food for their kids is not convenient for them,” says Kayser. He further adds that making good food more accessible and convenient was insufficient, and says food must, above all, taste good.

“Food needs to be tasty and children have to like it. If you just talk about health, it isn’t going to work.”

Major food companies—some of whom are responsible for introducing high-fat, sugary treats into developing markets—are now adding more nutritious products to their stable of brands and items.

“Most of these companies share common values and want to conduct responsible promotion of balanced lifestyles and healthier diets,” says Bartholomeusz, who works with companies such as Nestlé, Mars and Kellogg’s as part of the FIA alliance. He further adds that more companies are re-inventing their product labels to make nutritional information more easily understood by consumers.

However, in places such as Indonesia, where the food industry is dominated by small and medium enterprises, the government has a hard time influencing better diets through regulation and standardisation. The commercial sector captures only a quarter of total food products, leaving the rest to home businesses that operate on a smaller scale and are much harder to regulate.

To encourage consumers to develop healthier diets, the industry needs to move beyond producing fortified foods, and instead tailor nutrition schemes to suit local cultures, says Kayser. “How do consumers cook? How do they eat together? We need to think more broadly about the social dimensions of eating.”