Smart cities of the future: eco-utopia or dystopian nightmare?

Set to be the world's most connected and sustainable expo, Expo 2020 claims to be a blueprint for future cities. Other smart city projects from Asia to Africa have similar visions, but will they live up to promises of urban utopia?

New York, once the blueprint of a global, modern city, consumes a whopping 5 billion litres of water a day, according to Cedrik Neike, chief executive of smart infrastructure at Siemens.

“That’s twenty times the energy or resources used by an urban dweller in Jakarta. It’s a major urbanisation issue if everyone in cities had the same ambition to live as prosperously as a New Yorker,” Neike told journalists at the media launch of this year’s world expo, Expo 2020 Dubai, which the German technology conglomerate will digitalise from the ground up via Internet of Things (IoT) technology.

“We need to think of how we can live more sustainably in cities, while providing people with access to resources that will allow them to live safely and comfortably,” he added, noting that most urban dwellers today spent 90 per cent of their lives in buildings, making the built environment a prime area to revolutionise with digital technology.

According to the team behind Expo 2020, this year’s world exhibition serves as a new prototype for future cities, where IoT and smart-city technologies will be integrated into the urban landscape to improve the performance of services such as energy, transportation and utilities.

From waste management systems that can detect when bins are reaching full capacity to weather data applications that can predict the likelihood of a sandstorm, Siemens applications will be used at Expo 2020 to not only prepare for weather and waste but enhance the comfort and energy performance across all buildings and structures.

The rise of smart cities

Cities today consume two-thirds of the world’s resources, and by 2050, two-thirds of the global population is expected to live in urban areas. In order to accommodate this growth sustainably, the smart city has thus been hailed as a solution to the many problems suffered by existing cities, such as crippling traffic congestion, hazardous air pollution and burgeoning waste.

According to data from the International Data Corporation, governments worldwide are looking to spend close to $200 billion on smart city initiatives by 2023 to improve sustainability, maximise efficiency and reduce energy usage in cities.

Enhancing the well-being of people living in cities while minimising the impact of urban infrastructure on the planet is the driving factor behind the smart construction of the 4.38 square kilometre Expo 2020 site.

Set to open in October, Expo 2020 is an actual blueprint for a future city called District 2020, which will comprise both residential and commercial spaces. Major structures built for the expo will remain as permanent fixtures, and repurposed into innovation, cultural and educational services once the expo ends in 2021.

District 2020 promises to be the city of the future, but is not the first to claim itself a leader in the new era of sustainable urbanism. Today, smart cities are all the rage, and visions of techno-utopia have sprouted across Asia, Africa and the Middle East.

In the United Arab Emirates, developers behind The Sustainable City have transformed a once barren desert strip to a compact green city, where homes are fitted with solar panels, the streets are car-free and urban garden domes encourage residents to grow and eat local. 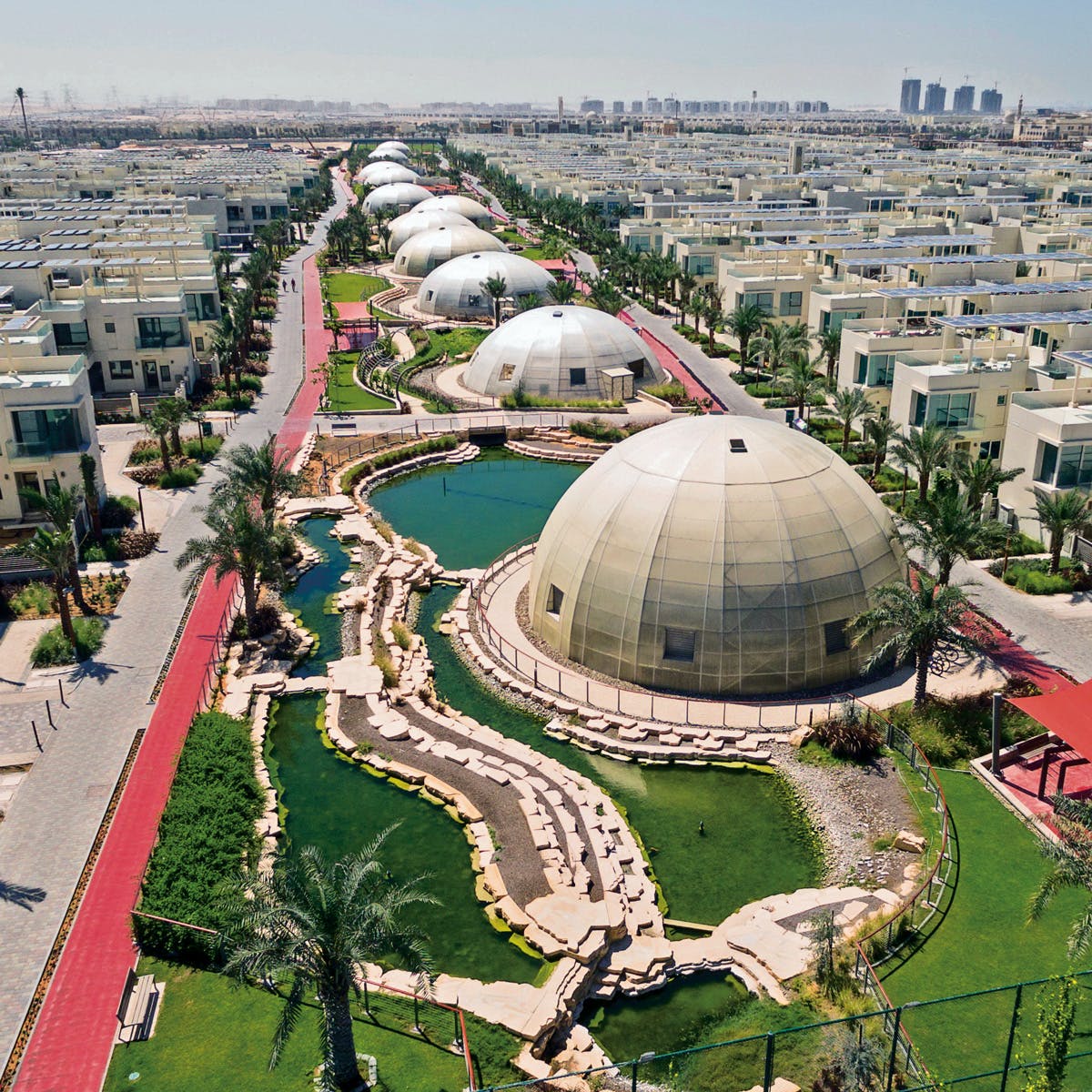 Songdo City in South Korea has a similar image of clean and green living, where rubbish trucks are nowhere in sight and trash is automatically sucked out of homes and into an underground sorting centre to be recycled, buried or burned.

“Although building cities from scratch does take space away from open, public areas, they allow for infrastructure to be built in a more sustainable way with a lower carbon footprint and very minimal impact on the environment,” Bonte said, adding that while old cities can be upgraded incrementally, they will “never be as sustainable as new developments.”

“For developing countries, smart technologies offer the opportunity to leapfrog traditional challenges by optimising planning and design to meet the unique needs of local residents, and by facilitating the process of rapid urbanisation, population migration and growing scale of cities,” echoed Derek Wang, general manager of Alibaba Cloud Singapore, which has helped to reduce traffic congestion in Malaysia and China using smart technology.

However, while new cities appear to signify environmental and technological progress, many are still far from the cosmopolitan ideal that cities like New York represent.

Initially intended to be the world’s first zero-carbon city when it was first constructed in 2008, Masdar City in Abu Dhabi has been struggling to attract both residents and investors, as well as meet its carbon-neutrality goals. Similarly, Songdo city has similarly been described as a Chernobyl-like ghost town that is increasingly catered to foreign expatriates.

Meanwhile, new cities such as Eko Atlantic in Nigeria, dubbed the country’s new Dubai, have led observers to deplore the rise of “privatised green enclaves for the ultra rich” while experts worry that governments are building from scratch to avoid dealing with the issues plaguing existing metropolises.

“Technology companies, construction companies, and the real estate industry are leveraging the many challenges facing cities in the global south to convince people that new cities are an important solution rather than fixing existing cities, which is not as profitable,” said Sarah Moser, the director of the urban studies program at McGill University, in an interview with The Guardian.

However, Limin Hee, director of research at Singapore’s Centre for Liveable Cities, believes that smart cities are being developed in a way to make every day life better for the people, which “includes giving people more choices and making information more available to them through technology.”

“Technology is an enabler for livability and not an end in itself. Smart is just another layer to the city,” she said. “You need a reason for people to live there. There needs to be jobs, good housing, a good environment. I doubt there is any country in the world that was built for the sake of being smart.”

“Ultimately, our work is not just about ingenious technology, but about creating added value for society and making our cities better places to live,” said Oliver Kraft, Siemens’ head of project and account management for Expo 2020.

You need a reason for people to live [in smart cities]. There needs to be jobs, good housing, a good environment.

In order to make more accurate decisions, smart cities typically collect data from people through the phones in their pockets, sensors watching their every move and other smart devices. This means that smart cities often have the power to identity where people are and what they are doing.

“By gathering information through citizens’ smartphones, the city can understand where the problems are and how to solve them,” said Bonte. “However, there is the obvious downside to how these data are being collected and used.”

When a plan was first introduced in 2017 to develop Quayside, a “smart city within a city” in Toronto, the project received strong criticism from citizens who were concerned about how the developer, a subsidiary of Google, was collecting and using citizens’ personal data. Fellow tech giants that are now powering the smart city revolution have also been accused of urban profiteering.

“It is less of a problem if you include and involve citizens in what is being done with their data. You need to be transparent with how much data is being used to improve their lives,” said Bonte, who added that citizens’ willingness to give up their data also depended on culture.

“In China, people don’t have such a big issue with surveillance, unlike in many Western countries, where it is more sensitive and people are very suspicious of governments using their data,” he said.

When asked about how Siemens is addressing issues related to data governance and privacy, Kraft told journalists at the media launch that Expo 2020 will be “inclusive of citizens and as transparent as possible, with the help of social media.”

Cities have also increasingly become targets for cyber-attacks, an issue that Dietmar Siersdorfer, chief executive officer of Siemens Middle East, described as one of the biggest challenges facing digitising industries.

In India last year, power utilities in Telangana and Andhra Pradesh were disrupted after they came under attack from hackers. Similarly, residents in the city of Atlanta in the United States were unable to pay parking tickets and utility bills after Iranian hackers launched a ransomware attack on the city.

“The need to develop new cybersecurity and data privacy measures is becoming more apparent and protocols have to be put in place to harmonise data regulations, which is what Southeast Asia is doing by creating frameworks for data privacy and protection,” said Hee.

Ultimately, smart city initiatives should not be imposed by governments, said Bonte, noting the importance of consulting citizens on their needs and concerns, especially when it comes to their personal data and social well-being.

“You can build all this new high-tech infrastructure, but in the end citizens have to want to live there. They might not care that much about sustainability, but people are interested in quality of life. Cities being built from scratch should think long and hard about how they should be conceived to attract the right people and keep them safe.”

Siemens sponsored the writer’s visit to the media launch of Expo 2020 Dubai.