In his first state of the nation address, Philippine president Ferdinand Marcos, Jr said the government will prioritise clean energy, but at the same time, will tap natural gas and nuclear power to meet the country’s energy demands.

Philippine president Ferdinand Marcos, Jr said on Monday that strengthening skills and resources to build clean energy technology will be a priority for the new administration, but it will also look to natural gas and nuclear energy to support the country’s energy needs.

“The use of renewable energy is on top of our climate agenda … We must take advantage of all the best technology that is now available, especially in the areas of renewable energy… [But] our search for new power sources should always be with an eye to improving the mix of the energy supply between traditional and renewable sources,” Marcos said in his first state of the nation address, where he reported on the administration’s priorities for the next 12 months, as well as his agenda for his six-year term.

In his 75 minutes-long speech delivered before lawmakers, former presidents, and diplomats, Marcos noted how the country needed “lead time” in developing renewables to lower the country’s carbon footprint, eyeing natural gas to “hold the key in the interim.”

He shared his plan for the enactment of an enabling law for the natural gas industry and providing incentives to liquefied natural gas (LNG) as a bridge fuel.

Natural gas, which accounts for over 21 per cent of the Philippines’s power generation, has been touted as a cleaner-burning fuel because it releases up to 60 per cent less carbon dioxide than coal.

Our search for new power sources should always be with an eye to improving the mix of the energy supply between traditional and renewable sources.

Marcos, who won a landslide election in May, also called for revisiting the use of nuclear energy. He said  regulations for nuclear power plants have been strengthened since the Fukushima disaster of 2011.

In 2018, a delegation from the IAEA was invited to the Philippines to review the country’s nuclear laws. It recommended moving nuclear safety regulation from its current home under the Philippine Nuclear Research Institute to a new independent agency, but this has yet to be done, as additional legislation approval, funding, and staffing are required.

“It is time also to re-examine our strategy for building nuclear power plants in the Philippines...There have been new technologies developed that allow smaller scale modular nuclear plants and other derivations thereof,” he said, citing the need for funding from public-private-partnerships.

Three months before Marcos’ predecessor Rodrigo Duterte ended his six-year term in office in May, he issued an order which approves the inclusion of nuclear power in the Philippine energy mix and revisits the reopening of the shelved Bataan Nuclear Power Plant (BNPP). The plant was built during the presidency of Marcos’ father, the late dictator Ferdinand Marcos, who was ousted from power in a 1986 uprising.

The BNPP was completed in 1984 at a cost of US$1.9 billion. However, due to financial issues and safety concerns related to earthquakes, the plant was never loaded with fuel or operated.

Environmentalists noted how Marcos put renewable energy at the top of his agenda, but outlined his plans for nuclear and fossil gas first.

“It’s hypocritical to talk about addressing the climate crisis while prioritising dangerous energy sources … Instead, what we’re seeing is that the necessary push for renewable energy and climate action is being maneuvered to suit the administration’s misguided nuclear and fossil gas agenda,” said Khevin Yu, campaigner for environmental watchdog Greenpeace.

Power for People Coalition, a network of civil society organisations that rally against pollutive fuels, expressed its “disappointment” that Marcos’ energy plans were “distracted and unsound” with his push for LNG and nuclear.

“The more we invest in imported, expensive, capital-intensive gas-powered facilities, the harder it becomes to discard them, essentially locking us into using gas instead of moving forward to renewable energy. And the more we rely on fossil fuels, the more consumers suffer during times of high prices on the global market, as we are experiencing now,” said Gerry Arances, convenor of Power for People Coalition. 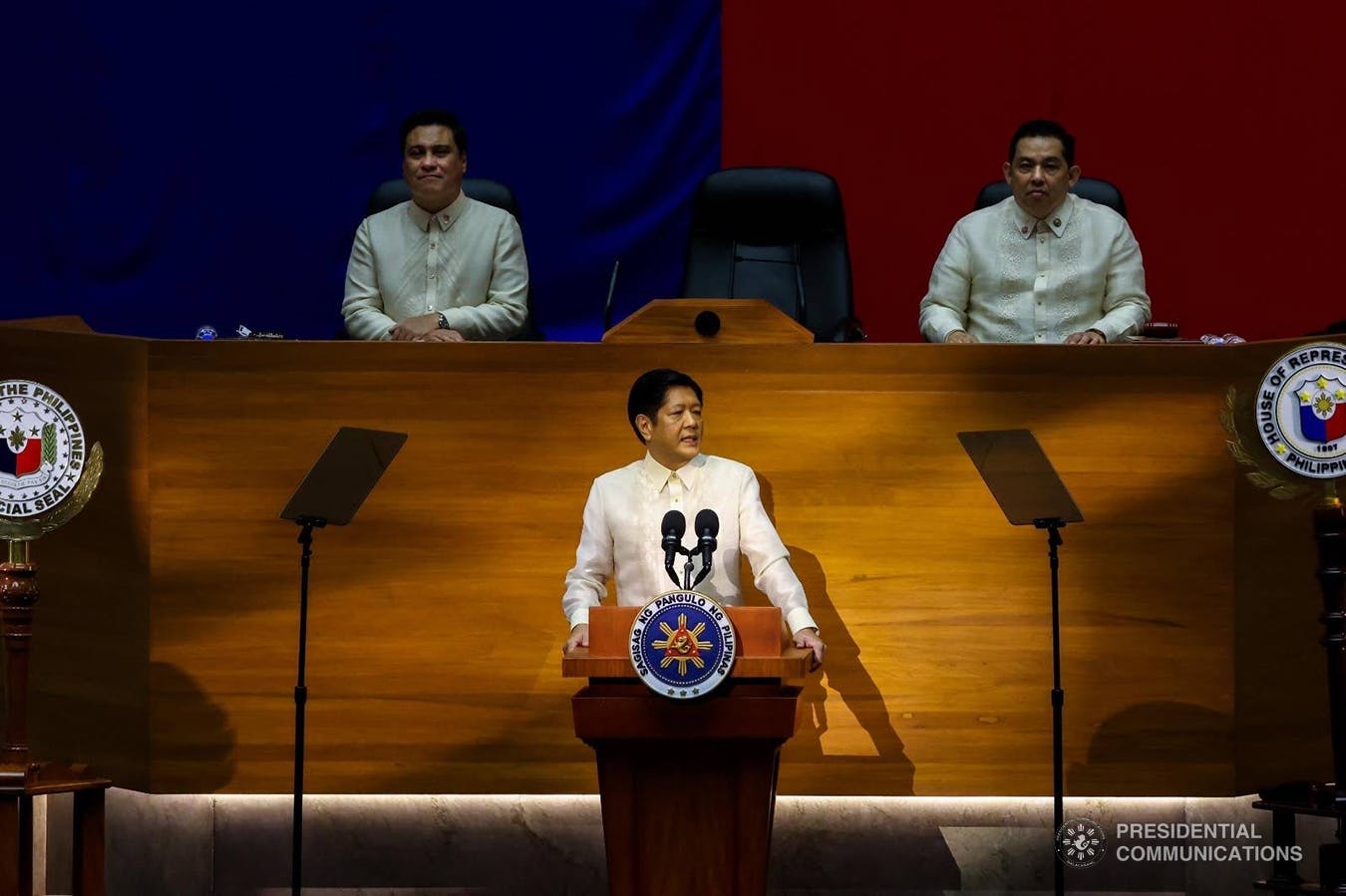 The Philippine department of agriculture will be instructed to research new ways of planting and raising livestock as it faces challenges brought about by climate disasters, Marcos said.

“The call of the times is for the infusion of fresh and new blood in the agricultural sector,” he said. “We need a new breed of farmers equipped with modern agricultural technology able to engage in sustained scientific farming that will not only increase farm yields, but also resilience in the face of climate change.”

Investment in agricultural research and development in the country has been criticised by experts as grossly lacking.

The Philippines became the world’s biggest rice importer in 2019 with purchases estimated at a record 2.9 million tonnes, despite being the headquarters of International Rice Research Institute (IRRI), an agricultural research and training organisation based in Los Baños, Laguna.

Food prices in the archipelagic country are not competitive because the lack of transport, science and technology gives farmers limited access to infrastructure and telecommunications systems that can help them reduce the cost of fuel, seeds, labour, fertiliser and pesticides, Bruce Tolentino, former deputy general of IRRI, earlier told Eco-Business.

“[Farmers] need innovations that would lead to more drought-resistant and high-yielding crops, and those able to grow in less fertile and more water-stressed areas, which are all available in the IRRI, but the Philippines, sadly, is not taking advantage of it. Instead, our other Asian neighbours are,” said Tolentino. 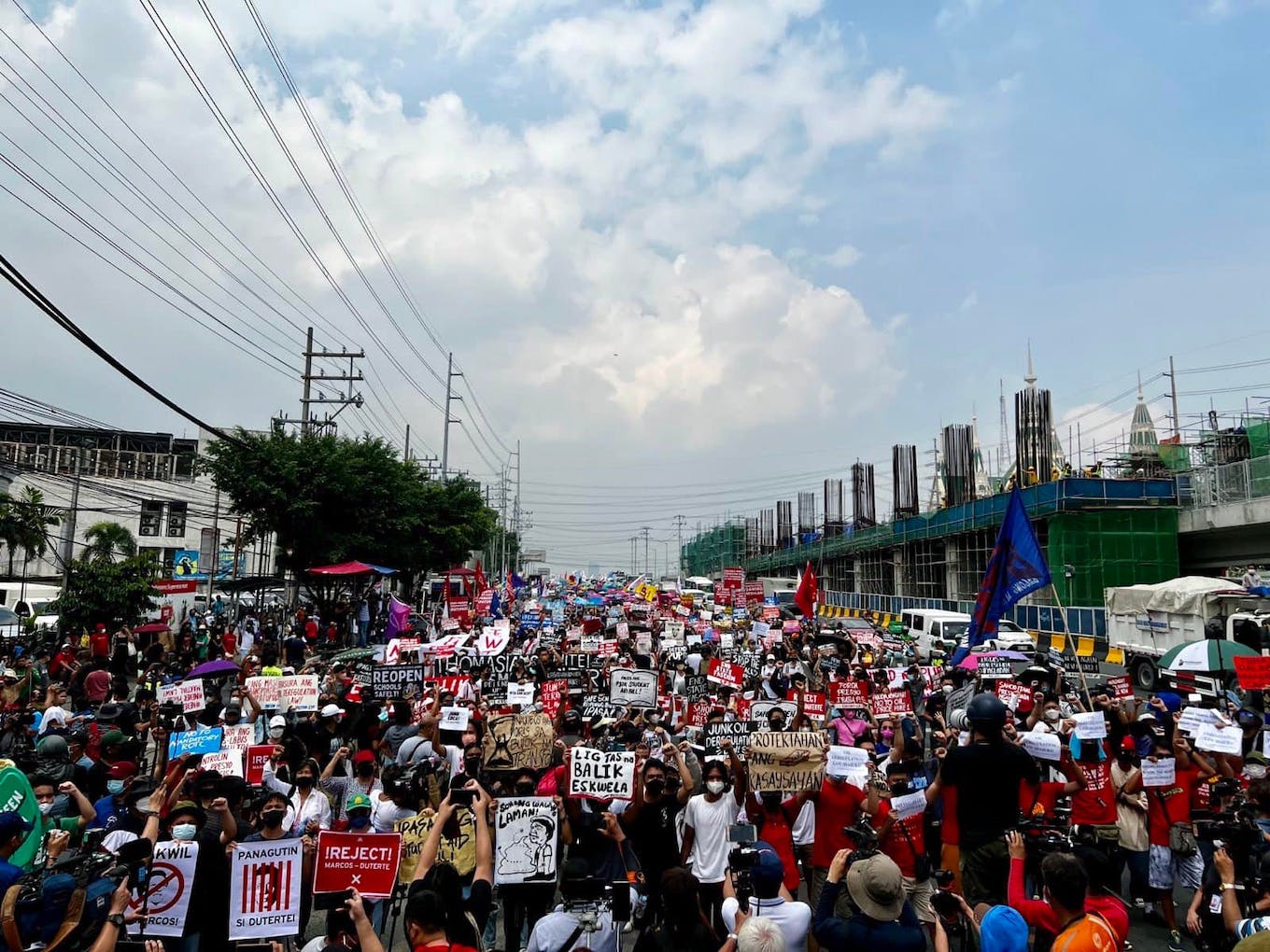 More than 8,000 people marched along Commonwealth Avenue before the state of the nation address to demand immediate economic relief and genuine reforms to address the country’s crisis. Image: Bagong Alyansang Makabayan

No mention of mining

Activists criticised how climate change was woven in with energy and agricultural themes, but Marcos was “distressingly silent” about mining issues.

“We are deeply disappointed that environmental issues — specifically mining — appear to be a low priority for the Marcos administration,” said Jaybee Garganera national coordinator of anti-mining non-profit Alyansa Tigil Mina.

Early this month, newly-appointed finance secretary Benjamin Diokno announced the government’s scheme to ramp up the mining industry, after the previous administration lifted a nine-year moratorium on granting new mining permits for copper, gold, silver and complex ores in the country. The government claimed it would revive the Philippines’ economy amid the slump induced by the Covid-19 pandemic.

“This confirms our fear that Marcos, Jr has very low awareness of environmental issues in general and mining issues and conflicts in particular. Either Marcos, Jr doesn’t see the links between mining, deforestation and climate change or he is careful not to offend the mining industry, which has connections to some powerful politicians in the current government, including many who hold elective positions,” Garganera said.