A new study finds that Australian consumers are reshaping demand with their concern for environmental issues. How should brands respond?

Australians care more about environmental than social issues, according to a new study on consumer sentiment.

A survey of 2,000 Australians conducted over four months from October last year found that respondents were twice as likely to be concerned about environmental issues such as climate change than they were social issues such as lesbian, gay, bisexual, transgender, and queer (LGBTQ+) equality or refugee rights.

The study, led by communications agencies Republic of Everyone, The Bravery, and Mobium Group, found Australians to be most concerned about ocean health, followed by climate change and plastic waste.

Australian consumers are also willing to back up what they care about with their wallets, according to the study. Almost three in five respondents said they actively look for products and brands that support causes or have environmentally-friendly attributes.

The same proportion said they are willing to pay more for such products, with 24 per cent saying they will pay up to 10-30 per cent more. 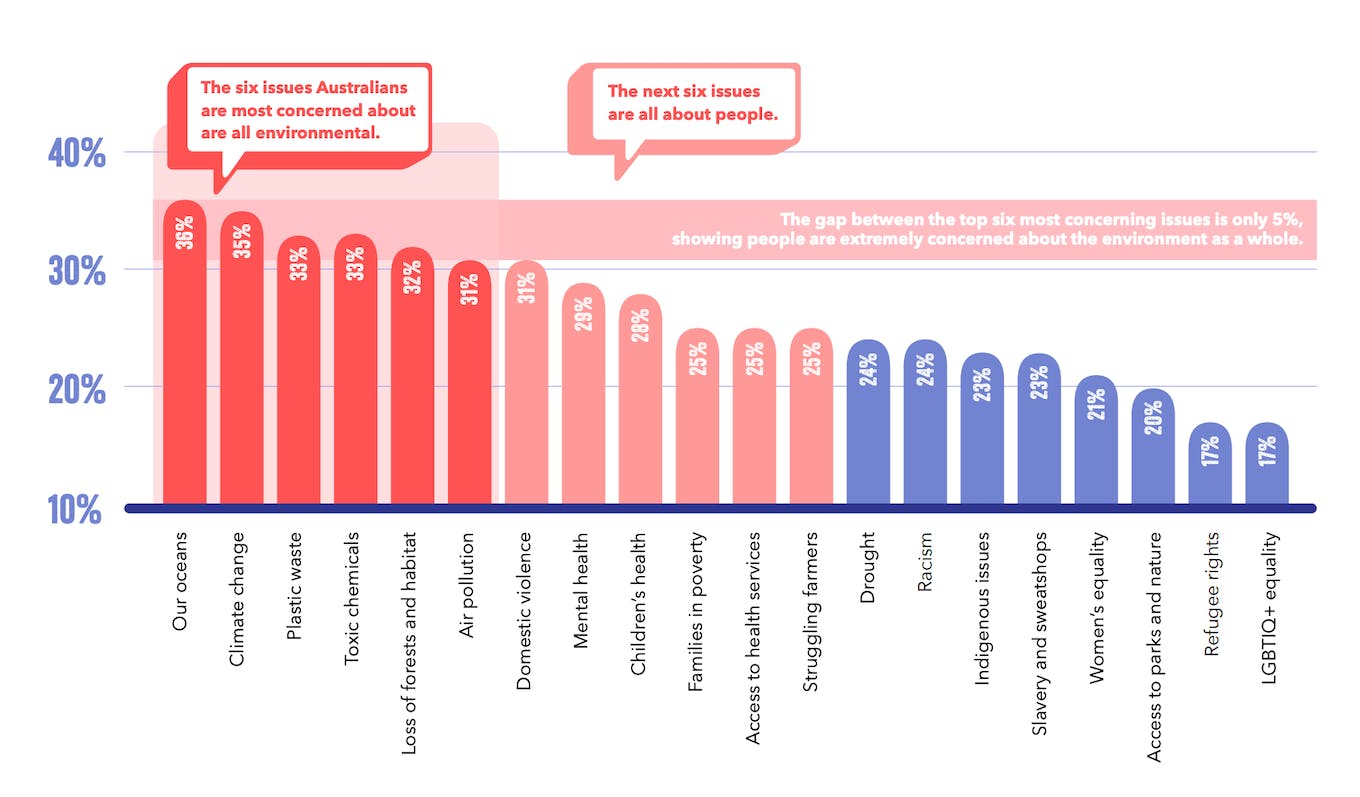 Overall concern for social and environmental issues among Australians aged 16-75. Image: The Power and The Passion 2021.

But there are key generational and gender differences when it comes to environmental and social beliefs and behaviour, the study found. “Boomers”, people aged 57-76 years old, are less likely than any other generation to take some sort of action to help the environment, with the exception of recycling.

Ben Peacock, founder of Republic of Everyone, said that this might be a matter of exposure.

“When boomers were younger, there was a lot of emphasis on toxic chemicals in awareness campaigns and the news. Now, the issue of toxic chemicals remains under the top three issues they’re most concerned about, whereas the climate story hasn’t been a part of their lives for as long as it has for other generations,” he observed.

Female and youth representation are key to better practice

Claire Maloney, director of The Bravery, said: “Where power lies in this country — whether across businesses, politics, or the economy — is actually not representative of our country’s demographic makeup, and neither is it representative of the issues that we want to see the government tackle.”

The study found that women and young people are more concerned about socio-environmental issues in Australia, but in both business and politics, their voices are under-represented. This lack of agency might be causing these groups to find power in their consumption choices, hence they’re more willing to support green brands.

“As a conscious consumer who votes with your wallet, you’re sending a signal to other brands that don’t commit to ethical practices — you’re telling them that they’re going to go out of business if they don’t,” said Peacock. 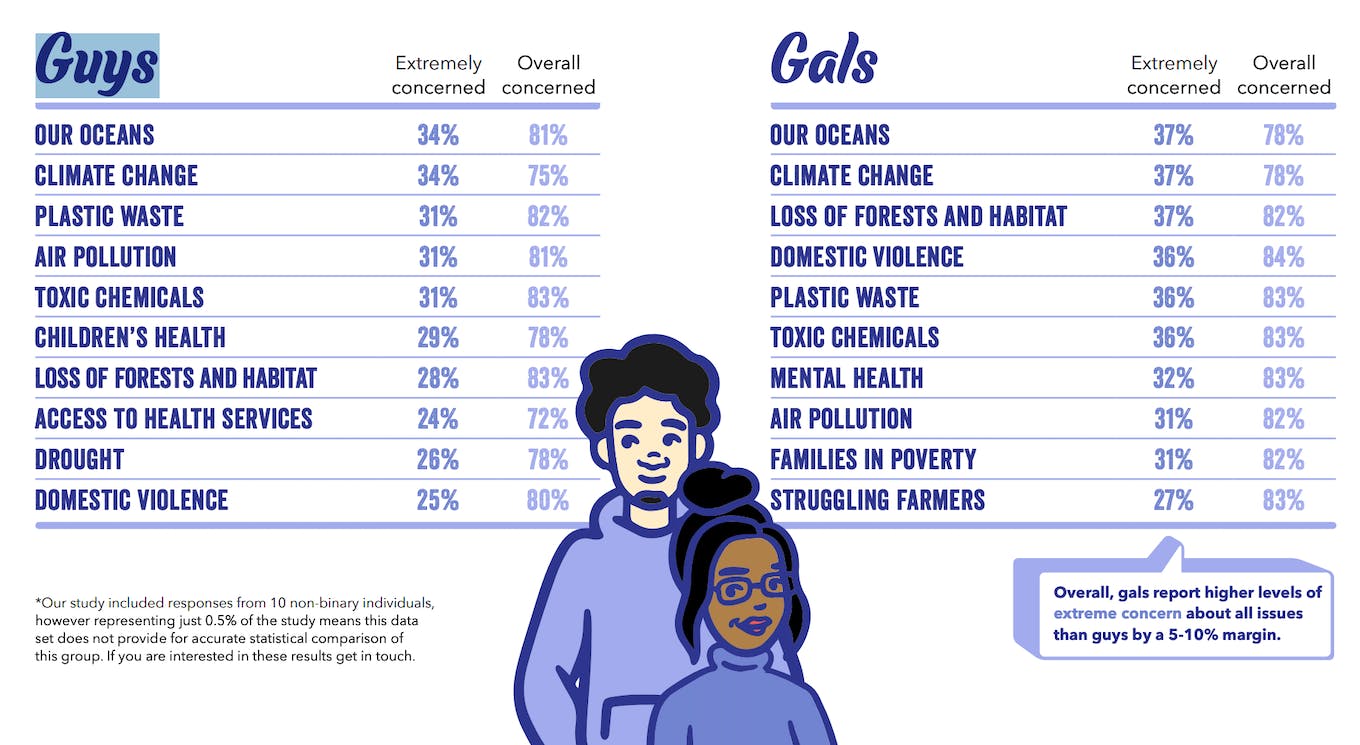 People who identify as female report higher levels of extreme concern about all issues than those who identify as male, by a 5-10 per cent margin. The study focused on binary genders due to the lack of non-binary survey respondents. Image: The Power and The Passion 2021.

Out of Australia’s most powerful 200 companies in the ASX200, only 19 are led by female CEOs. This is less than the number of CEOs or board members named John or Peter, according to a census by Chief Executive Women (CEW).

In politics, women earn AUD$25,716 less annually, and it is projected that it will take eight election cycles to reach gender parity — “years behind” Australia’s private sector, as former lawyer and company director Julia Banks has pointed out.

Similarly, younger generations hold little political power in the country. Only 3.1 per cent of Australian national representatives in parliament were aged under 35 during the last federal election in 2019, leaving older generations very much in control of policymaking.

These big gaps in political representation could in part explain Australia’s lack of readiness to be an environmental steward for Asia Pacific, despite being one of the most socio-economically developed countries in the region.

In the 2020 Climate Change Performance Index, Australia was singled out as having the worst-performing international climate policy, both at national and international levels.

Apart from dismissing recent IPCC reports and neglecting to attend the 2020 UN Climate Action Summit, the re-elected Scott Morrison government had also continued to endorse controversial coal projects like the Adani coal mine.

The people who have the power to change are simply not really acting as fast as the younger generations would like. This leaves a big opportunity, of course, for brands to step up.

Ben Peacock, founder, Republic of Everyone

Though boomers have accumulated the most wealth over time, younger generations are the ones with bigger spending and risk appetites, and therefore constitute a big chunk of demand for consumer products, observed Peacock.

“They also tend to be the generation that most brands and companies are trying to attract, whether it be to expand their customer base or to ensure their businesses have longevity,” he says.

A wave of change calls for deeper climate action

With more Australian consumers feeling the heat of the climate crisis, more are buying less and buying better, and brands are following that demand closely, according to Peacock.

The study also advocates for climate action as well as ethical consumption, and calls on young people to vote and participate in politics.

“Part of the reason that younger people don’t have much power is that they just don’t choose to get involved in the issues that matter, and they’re not giving themselves the chance to create change,” said Peacock.

As for brands trying to go green, Maloney said consumers can “smell” a corporate initiative created only for marketing purposes from a mile away.

“As a brand, you need to ask yourself if you have the legitimacy to get involved in certain issues, because you don’t just want to produce a shiny marketing campaign — you want to create real impact,” she said.