Air pollution, made worse by climate change, contributes to the global burden of disease and is to blame for the death of 40,000 children under the age of five last year.

No single country met the latest World Health Organisation’s (WHO) PM2.5 annual air quality guideline, according to a new report that analysed real-time air quality from thousands of monitoring stations in 117 countries.

Fine particle pollution 2.5 micrometres in size, known as PM2.5, is considered the most harmful, widely monitored air pollutant and has been found to be a major contributing factor to health effects such as asthma, stroke, heart and lung diseases.

The estimated daily economic cost of air pollution has been figured at US$8 billion, or 3 to 4 per cent of the gross world product. 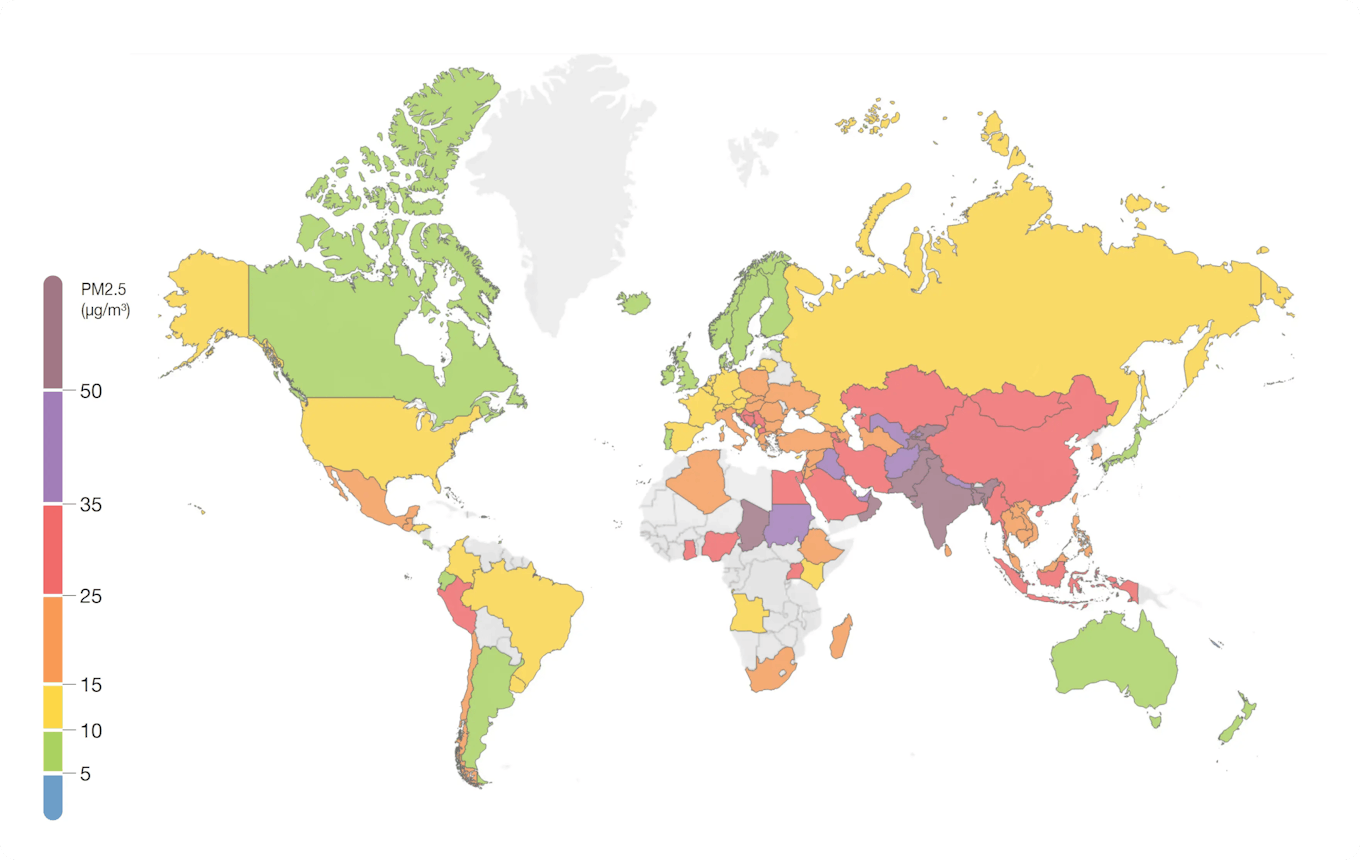 In September 2021, the WHO updated guidelines cutting the recommended level to PM2.5 in half, to 5 micrograms per cubic metre of air. No country hit that standard, according to the report released on Tuesday by IQAIR, a Swiss company that makes air quality monitors and air purification technologies.

“It is a shocking fact that no major city or country is providing safe and healthy air to their citizens according to the latest World Health Organization air quality guidelines,” said Frank Hammes, chief executive of IQAir. 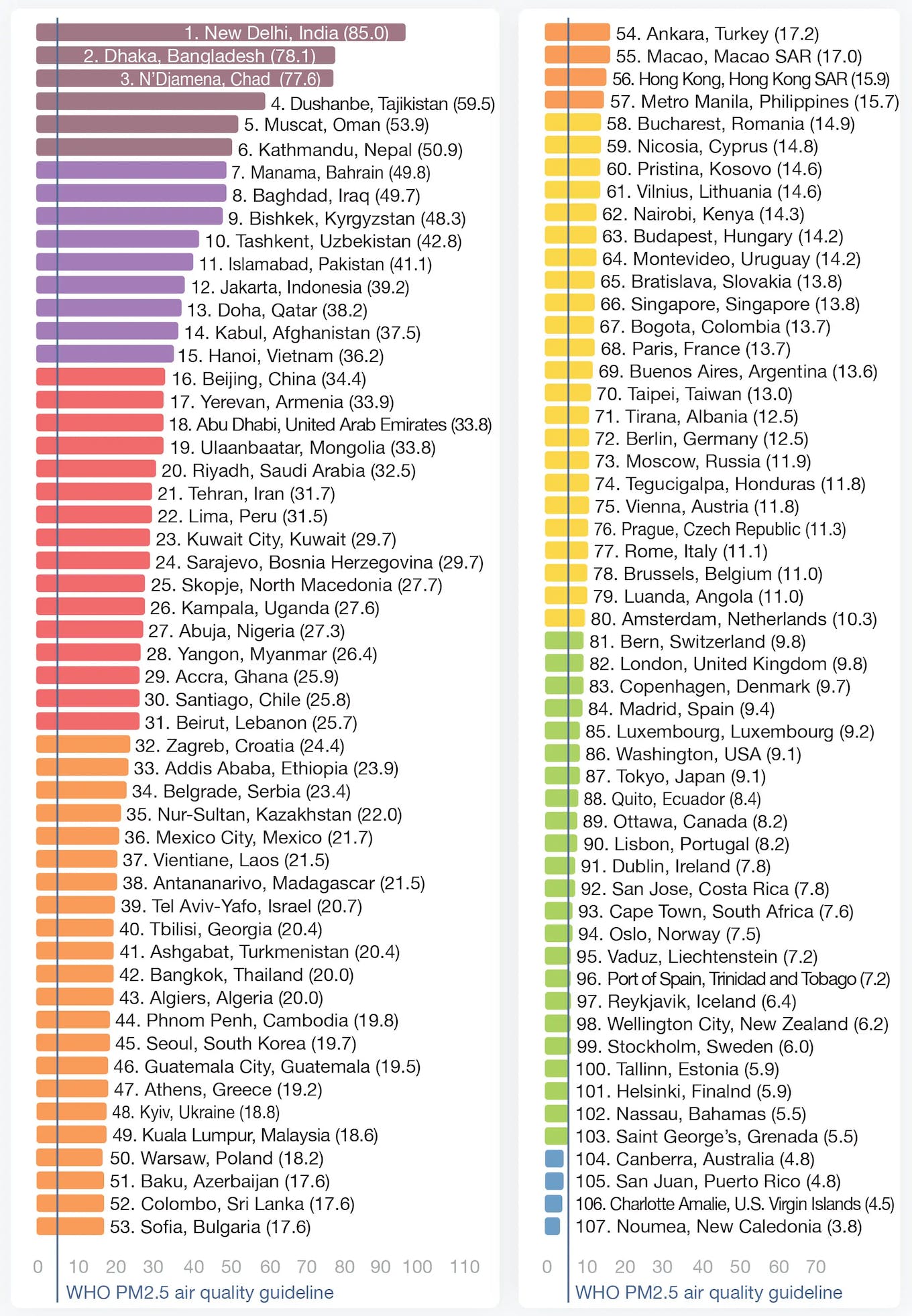 According to the United Nations Environment Programme, 70 per cent of global air quality related deaths occur in this region.

The combustion of fossil fuels is a primary driver of air pollution in Southeast Asia which remains reliant on oil and coal for energy. Open burning adds to poor air quality, exacerbated by deforestation and agriculture which have intensified wildfires and transboundary haze as a result.

On Tuesday, a group of non-governmental organisations lodged a suit against three public departments in Thailand for neglecting their mandate of protecting Thai citizen’s basic rights to clean air.

Thailand has seen some gradual reductions in country-level PM2.5 the IQAir report said. However, air pollution in the city of Chiang Rai was found to exceed the WHO air quality guideline by five times.

“Hindrances to combating air pollution include a lack of air quality monitoring, a lack of public awareness about the health impacts of crop burning, and a lack of enforcement of anti-crop burning laws,” the report added.

Air quality in China continued to improve in 2021. More than half of the cities in China included in the report saw lower levels of air pollution when compared to the previous year. Pollution levels within the capital city of Beijing continued a nine-year trend of improved air quality, driven by emission control and reduction of coal power plant activity and other high emission industries, the report said.

The cleanest air was found in the South Pacific island nation of New Caledonia.

Air pollution affects those that are most vulnerable, the report said. It is estimated that in 2021, the deaths of 40,000 children under the age of five were directly linked to PM2.5 air pollution.

In the context of the Covid-19 pandemic, researchers have found that exposure to PM2.5 increases both the risk of contracting the virus and of suffering more severe symptoms when infected, including death.

Climate change was pegged as a key driver for poor air quality, an issue that disproportionately impacts emerging and low-income countries which have struggled to raise the funds to adapt against the inevitable impacts of a warming planet.

Dust storms for instance, have become more frequent and extreme in some nations because of drought and rising temperatures due to climate change.

There is a huge disparity in the availability of air quality data with blind spots in Africa, Central America and Latin America. The second most polluted country in 2021 is Chad in Central Africa which had previously gone unrecorded.

“This report underscores just how much work remains to be done to ensure that everyone has safe, clean and healthy air to breathe. The time for action is now,” Hammes said.