Campaigners say the Thai government has neglected its mandate of protecting citizens’ basic rights to clean air. Meanwhile, smog has reached dangerous levels in the agricultural north of the country.

A collective of non-governmental organisations is suing the Thai government for failing to protect its citizens against air pollution, Eco-Business can reveal.

NGOs including Greenpeace Thailand and Environmental Law Foundation (EnLaw), a local environmental law advocacy group, are filing suit against three public departments, the National Environment Board, Ministry of Natural Resources and Environment, and the Ministry of Industry, for neglecting their mandate of protecting Thai citizens’ basic rights to clean air.

Environmental groups have long campaigned for the introduction of a clean air act, and in January pushed for the government to come up with an action plan to tackle fine particle pollution, or PM2.5 pollution. The country’s Pollution Control Department monitors air quality, but has a limited legislative mandate or budget to effectively address air pollution, with no power to punish polluters. 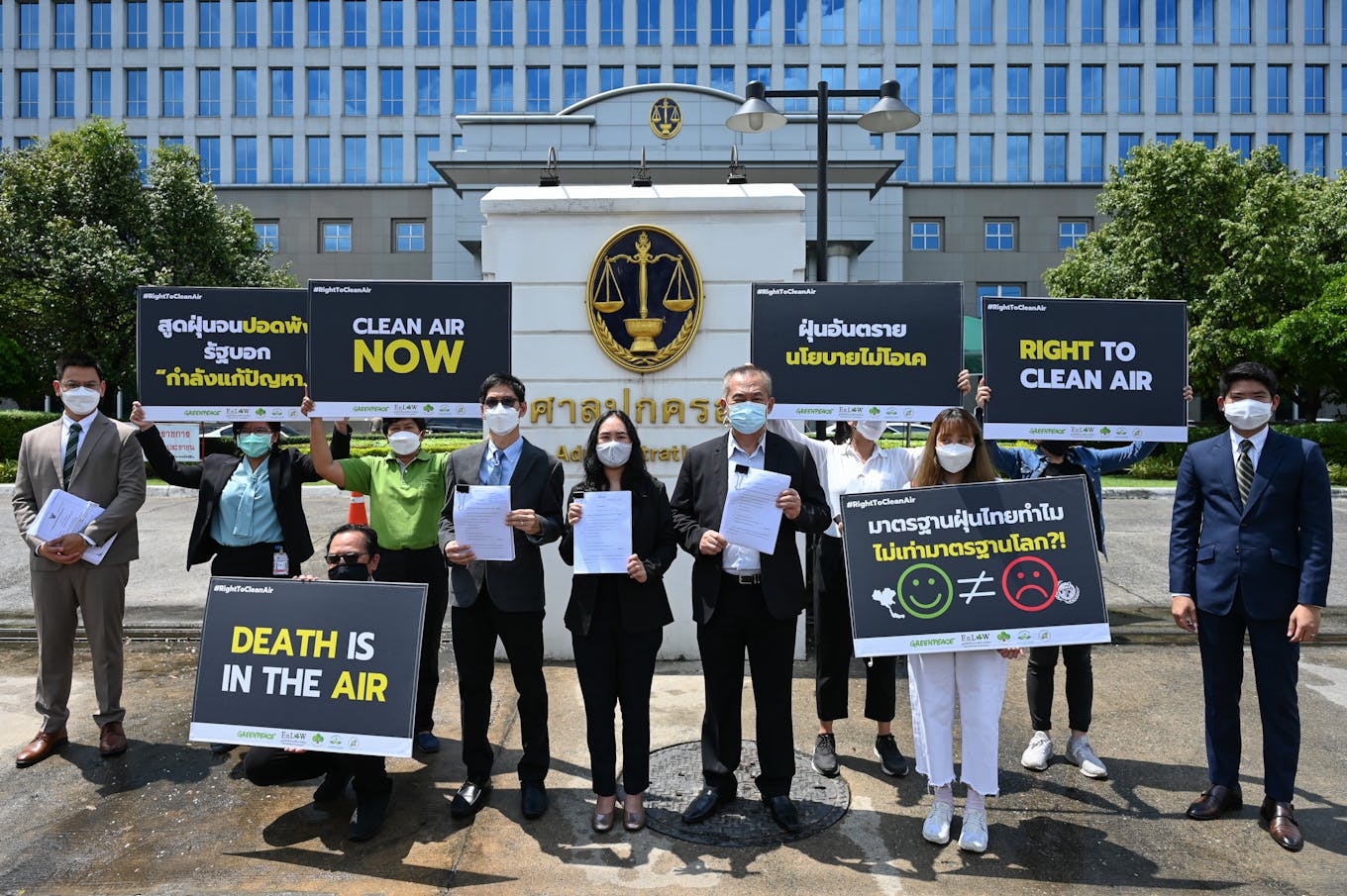 “Death is in the air”. Campaigners outside the Administrative Court in Bangkok, Tuesday 22 March. Image: Panumas Sanguanwong/Greenpeace

Among the demands of the NGO collective is for the government to introduce stricter air quality standards in line with World Health Organisation (WHO) recommendations, and for PM2.5 to be included on a list of pollutants that industrial facilities are required to publicly disclose.

Surachai Trongngam, secretary of EnLaw Foundation said in a statement seen by Eco-Business: “Government agencies responsible for environmental protection have been sluggish in addressing PM2.5 pollution in a timely manner. It undermines the right of people to live in a healthy environment.”

“The task of all people is to examine the competency of power holders to accomplish their obligations. This litigation intends to effect changes that will allow for faster and more efficient action on the PM2.5 crisis.”

Thailand’s air quality reached dangerous levels this month in the agricultural north of the country, where farmers have been burning crop residue. The resultant smog has affected neighbouring countries. 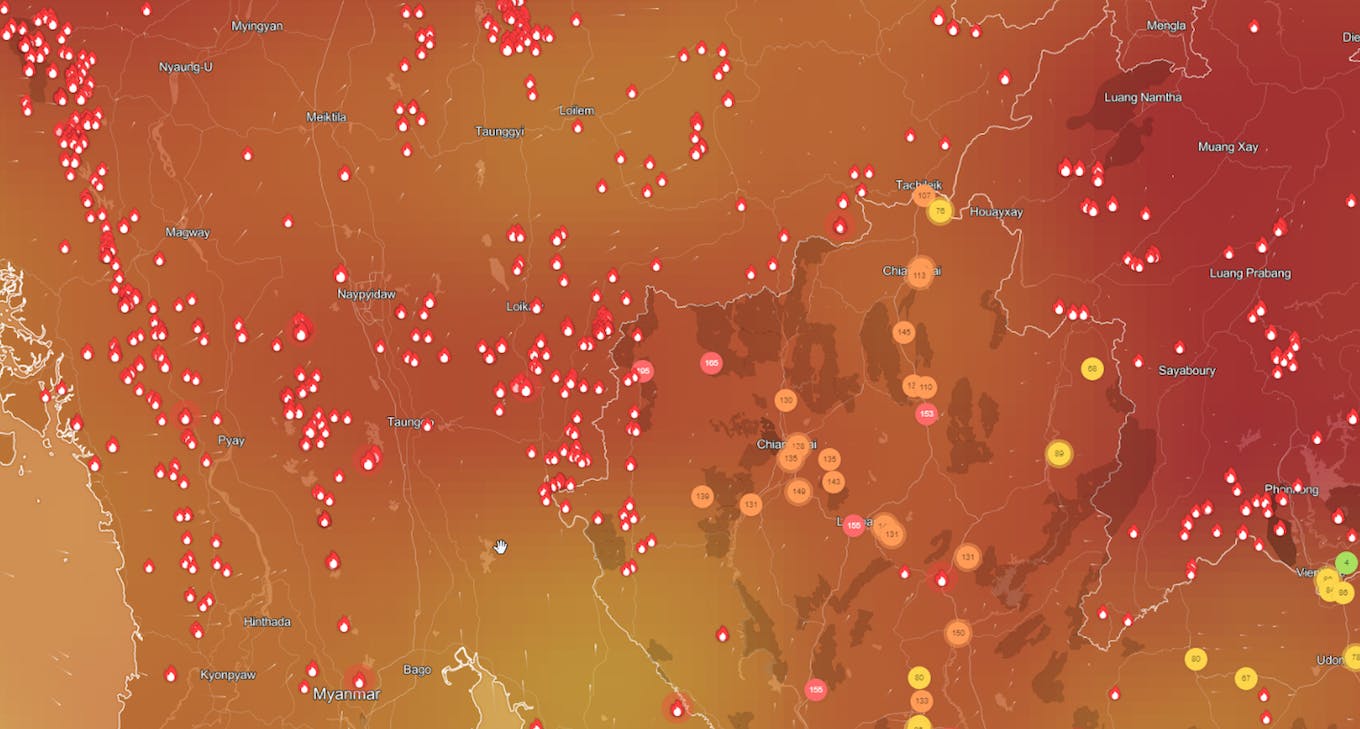 Air pollution in Thailand’s major cities rarely meets the WHO’s air quality standards, and shortens the average citizen’s life expectancy by 1.8 years, and up to 3 years in the country’s north. Air pollution caused about 32,000 premature deaths in Thailand in 2019, according to State of Global Air 2020.

“These estimations may be only scratching the surface,” said Wirun Limsawart, director of Society & Health Institute, Thai Ministry of Public Health, and co-founder of the Thailand Clean Air Network. “More aggressive evidence collected locally and more comprehensive legal reform is needed to address the overlooked suffering of people in the country. Thus, the Clean Air Bill will be a critical precondition to bringing back breathable air in Thailand,” he said.

In April last year, a resident of Chiang Mai city, which sits in the country’s far north hard hit by hazardous PM 2.5 haze, won a lawsuit against the state for not taking action against air pollution. NEB was ordered to declare Chiang Mai province a pollution control area, in a bid to limit hazardous hotspots. NEB appealed against the ruling.

Earlier this week, an eminent scientist died of lung cancer linked to air pollution. She had lived in Chang Mai for the past decade, where air pollution levels are 18 to 52 per cent higher than the national average, because of seasonal land burning.

Though open burning practices are illegal in Thailand, farmers often cannot afford the expense of hiring workers to cut and gather leaves, which would delay the next crop cycle.