Two weeks after the Philippines’ deadliest volcano blew up, thousands of displaced residents are still living without electricity and inhaling ash. Some Filipinos have come up with earth-friendly ideas to make life a little easier for the victims.

Thousands of Filipinos fled their homes when a volcano near the capital, Manila, spewed ash and lava on the afternoon of 12 January.

The eruption of Taal volcano—considered the country’s deadliest, having killed about 6,000 in the past—caused multiple earthquakes in Batangas province, south of Metro Manila, forcing residents to seek temporary refuge in school gyms and classrooms outside the danger zone.

Two weeks into the unrest, evacuees yearning to return to their homes despite the risks have been strictly prohibited from doing so by authorities, amid the continuing threat of a major volcanic eruption.

Although help has poured in through donations of food and clothing, evacuees still face the bleak scenario of having no electricity, breathing air tainted by the smell of sulphur, and trekking through debris on cracked roads.

But some Filipinos have turned adversity into opportunity, and come up with creative  and earth-friendly ways to help their kababayans (fellow countrymen) ravaged by Taal. 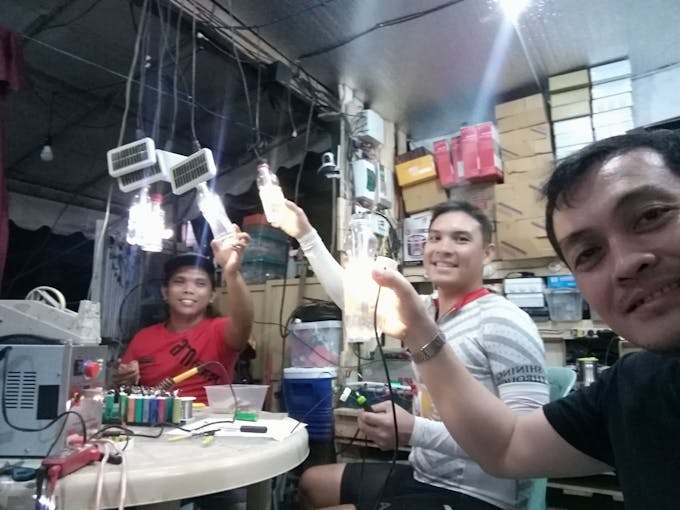 Power supply was cut in at least five towns in Batangas because of the restive volcano, with no electricity restored in some parts until today.

Images of victims huddled in cramped evacuation areas with no light caught the attention of a 43-year old engineer from Manila.

Ed Brisenio, a long-time advocate of solar energy, sprang into action and called for volunteers to help make solar lamps for the electricity-deprived Taal evacuees through a Facebook post. They have made 200 solar lamps in two weeks and aim to make 400 more.

Brisenio said it costs about US$3 to put together a solar lamp, which consists of a 1 watt solar panel in a polyethylene terephthalate or PET bottle. The solar panel charges a lithium battery, which in turn powers the light emitting diode (LED). When the solar panel receives sunlight, the LED light automatically turns off to save energy before turning on again at night.

“This is not a new invention. You can learn how to make a solar lamp by reading textbooks. But I just thought that by actually teaching ordinary people how to make one, they could benefit from it, especially the Taal victims,” Brisenio told Eco-Business.

“Since ashfall knocked down power distribution circuits in Taal, who knows when they’ll get electricity again? I hope these solar lamps can help them (in the meantime).” 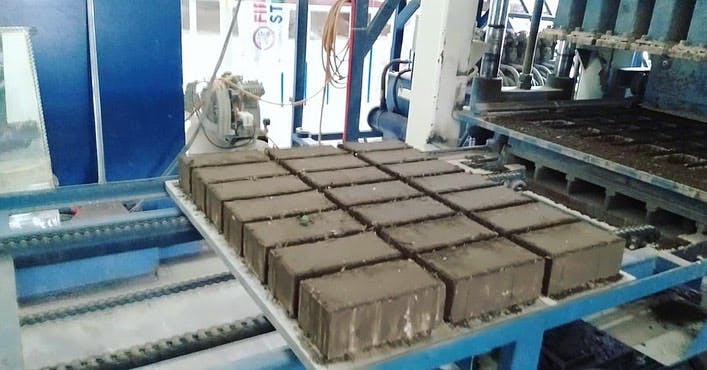 The materials recovery facility of Biñan, Laguna has the capacity to make 5,000 eco-bricks per day. Image: Biñan City Information Office

In Biñan, Laguna, its city government found a way to slowly help evacuees reconstruct their communities: reusing the ashes from the volcano to make environmentally friendly bricks.

Biñan City was among the areas shrouded by ashfall. Households were asked to collect the ash that littered their surroundings and take it to the city’s materials recovery facility to be converted into bricks.

More than 5,000 bricks have already been produced, made mostly of ash, with some shredded plastic, white sand and a little cement and water.

Rodelio Lee, the city’s environment and natural resources officer, told Eco-Business that the project is an offshoot of Biñan’s existing solid waste management programme that uses shredded plastic waste in the production of eco-bricks. It is the first time the city government is experimenting with ash, although the concept of fashioning eco-bricks from volcanic ash is not new.

Lee said the bricks still have to undergo compression tests to see if they will be sturdy enough to build structures like buildings and houses. For now, they may be used to rebuild sidewalks, roads, and open spaces that have been destroyed, he said. 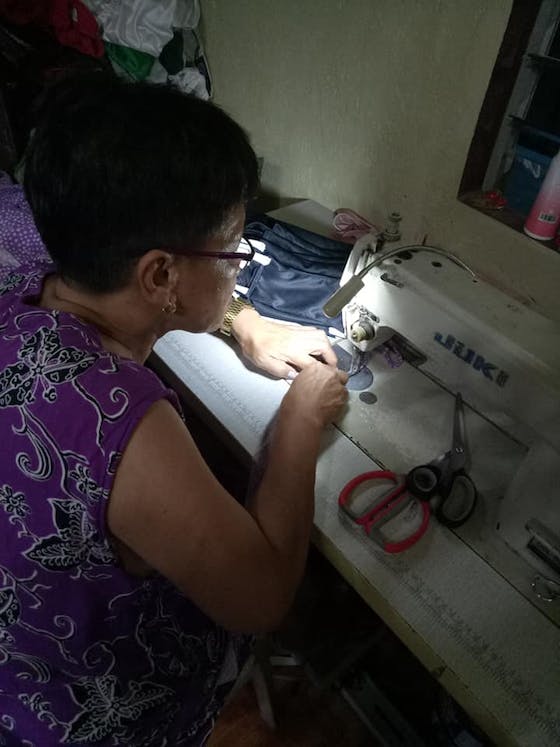 Rosalina Mantuano burns the midnight oil to come up with 200 reusable masks she made on her own on the week of the eruption. Image: Mary Ann Mantuano

A seamstress who lives near the danger zone in Lipa, Batangas, saw how her neighbours and relatives developed cough and allergies as they shielded themselves from volcanic ash using only handkerchiefs and plastic bags.

Shortly after the eruption, demand for face masks surged and prices jumped to as much as five times the usual price.

“I don’t have much money, but I really wanted to help. I saw on TV that face masks were running out in stores, and worse, some sellers were trying to take advantage of the situation by jacking up the prices. So I decided to sew face masks and give them away to those who need them,” Mantuano told Eco-Business.

In one week the 61-year old was able to gather her family, including her grown-up grandchildren, to sew 700 face masks. News of Mantuano’s good deed spread quickly on social media, prompting money donations from netizens to produce more masks.

N95 face masks, which are capable of filtering at least 95 per cent of airborne particles, are ideal for protecting against volcanic ash, but they were the first to run out. Scientists have found that cloth is less effective in filtering particles, with an efficiency of less than 44 per cent. However for Mantuano, her masks are still the best option.

“The cloth masks are better than the expensive ones in stores. They can be washed, reused and best of all, it’s free,” she said.