The Philippine government has begun the process of relocating more than 200,000 families living along waterways to restore Manila Bay, the main body of water in the capital. 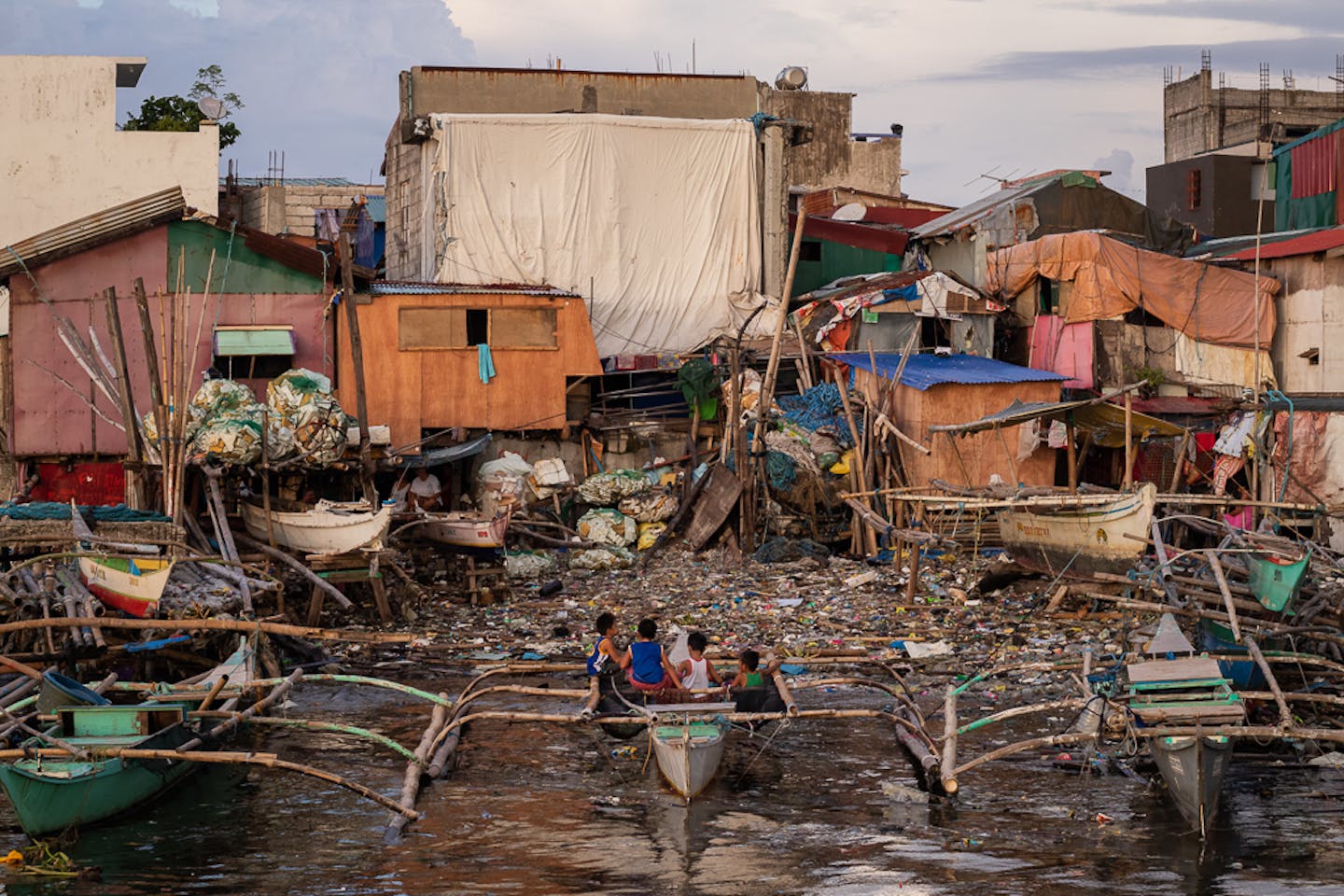 On a Wednesday afternoon, Rosemary Herela peers out the makeshift window of her home made of corrugated tin and salvaged wood. She sees a woman in the distance paddling on a Styrofoam raft looking for pieces of wood to sell.

Herela waves to the woman, and the exchange prompts her to reminisce about her first days in Isla Puting Bato, a narrow strip of land along Manila Bay.

“This was all rock before. The water used to be crystal clear, and you could see the sand,” says Herela, a petite 41-year-old with a gaunt face and a short bob.

She used to live with her husband 24 kilometers (15 miles) away in Caloocan City, but they moved in search of work. Isla, located in Tondo, Manila’s most densely packed slum district, offered promise because it sat near a port area.

They moved into her husband’s friend’s house by the water until they saved up the equivalent of $40 to buy a small lot from a neighbor. Other neighbors helped them build their one-room shack out of wood scraps and corrugated metal sheets. Her husband found a job unloading cargo at a nearby pier, while Herela made and sold lump charcoal.

That was 20 years ago. Since then, Herela has given birth to six children, watched her husband die of hepatitis, fallen in love with her neighbor, and given birth to two more children who are now 3 and 4 years old — all in the same house, which now extends beyond the shore.

They have no trash can. They have no toilets. They turned the waterways into a dumping ground of all their wastes.

And on Isla, shacks like hers now stand side by side, covering the shore and extending over the water. It’s known for being a village of squatters or informal settlers, people who occupy private land without having the proper title or right to do so.

But their days on Isla are limited. Like Herela, more than 200,000 informal settler families in Metro Manila are facing relocation because of a government initiative to restore Manila Bay, one of the most polluted bodies of water in the country.

The settlers are seen as the main source of pollution in the area, according to Jose Antonio E. Goitia, executive director of the Pasig River Rehabilitation Commission (PRRC). “They have no trash can. They have no toilets. They turned the waterways into a dumping ground of all their wastes. It caused a vicious cycle of pollution that could only be ended through relocation, among other rehabilitation strategies,” he said.

Herela says this practice of throwing waste directly into the bay is common. She says no one collects their garbage because, under the law, their homes are considered illegal settlements. “We throw our trash right there in the water. Our neighbors do it too,” Herela says. “It’ll go away when the tide comes.”

Their bathroom is just a small section of their living room, partitioned off with a blanket. The toilet is a hole in the floor. She says she’s never gotten sick from eating fish from the bay, even though their waste goes straight into the water. Herela says they can harvest mussels, crabs and fish like tilapia and dario.

The push by authorities looking to beautify and restore environmentally compromised areas is happening in a number of places across the world — from Fiji’s government relocating several coastal communities threatened by climate change, to India’s Tamil Nadu state evicting more than 52,000 families living in slum areas for new roads.

In the Philippines, government officials see Manila Bay as an environmental imperative, especially because of its potential for recreation and tourism. Yet the bay is in critical condition.

Man-made pollution and deforestation threaten the bay’s natural ecosystems, including its mangroves, mudflats and coral reefs, and failing to act will lead to a decline in fisheries, says Rodne Galicha, executive director of Climate Action for Sustainability Initiative.

Although the country’s Supreme Court issued a writ ordering 13 government agencies to restore and preserve the bay back in 2008, its quality hasn’t improved. The environment department reported in January 2019 that the bay’s level of fecal coliform, a type of bacteria found in feces, was almost 3.3 million per cent over the standard 100 most probable number (mpn).

Last December, environment secretary Roy Cimatu expressed his intent to make the bay swimmable again by 2020, through a seven-year rehabilitation project priced at 47 billion pesos ($900 million). The interior and local government department has ordered local government units and agencies to conduct system sewage checks and submit a weekly report of their own cleanup drives.

Manila Mayor Francisco “Isko Moreno” Domagoso is taking the lead on cleaning up the city and its waterways. During his first few weeks in office, Moreno visited polluted waterways that drain into the bay, appealed to informal settlers to relocate, and promised to build vertical housing units because he said sending them to faraway relocation sites would not benefit them.

Moreno has also talked about turning around 30 per cent of the city’s total land area into green spaces by redeveloping parks and planting more trees, which could address the city’s perennial flooding and vulnerability to climate change.

When it comes to relocating informal settlers, the bay’s pollution isn’t the government’s only concern. There’s also climate change.

For example, year-round rainfall is expected to increase in the Manila Bay area due to climate change, as projected by the Philippine Atmospheric, Geophysical and Astronomical Services Administration (PAGASA). Galicha says that could lead to landslides and floods that could hurt those living in shanty villages.