News Lighting the way to a brighter future

What is the future of energy for Myanmar's rural population?

To deliver on its goal of 100 per cent energy access by 2030, Myanmar will need to shake up its energy market. With hydropower facing increasing objection from society, how will the former hermit nation power its people for a more sustainable future?

Among the 10 countries that make up the Asean, Myanmar has the highest percentage of renewables in its energy mix - hydropower constitutes 65 per cent of generated electricity.

But this figure alone masks the country’s absymal rate of electrification, with chronic power shortages a regular occurence and more than 40 per cent of its total population still lacking access to the national grid. Sixty per cent of Myanmar’s rural populace live off gid, relying on polluting, expensive kerosene lamps and firewood to illuminate their homes.

Providing clean and sustainable electricity to off-grid areas is a challenge, to say the least. Assaad Razzouk, chief executive of clean energy projects developer Sindicatum Sustainable Resources comments: “Even India, a country that has seen great success in scaling up utility-scale solar, has struggled to scale up distributed and rooftop solar [in rural villages]. Fundamentally what’s required are clear government policies and credit support for the rural population.”

This has not stopped the previous government from announcing its goal to provide full access to electricity by 2030. Aung San Suu Kyi’s National League for Democracy (NLD) inherited these lofty ambitions when it swept into power later that same year, as well as a growing economy with low foreign direct investment and weak infrastructure.

Coal is one option to jumpstart Myanmar’s fledgling economy. But local experts caution against relying mainly on imported bituminous coal to fuel power plants, which would also set the country back on its emissions targets and climate action. And despite its abundant stores of natural gas, developing the infrastructure to tap and store it countrywide would be costly.

But a decrease in the overall share of the energy mix could still mean an increase in absolute terms as the country’s demand for electricity surges thanks to economic development.  Hydropower, generally considered a renewable source of energy, has historically provided the lion’s share of total power generation capacity.

But the local population has grown wary of hydropower. The construction of the Hat Gyi dam on the Salween River, the heart of a bloody conflict between the Karen ethnic minority and Myanmar’s military, will displace up to 30,000 people and wipe out much of the river’s biodiversity. Furthermore, a number of large dams are built to export power neighbouring countries rather than local communities, including the now-mothballed Myitsone Dam that would have exported electricity to China.

Continued reliance on hydropower also leaves Myanmar vulnerable to power shortages and blackouts during the annual dry season when water levels dip like in May this year.

Still, there are 200 large dams for hydroelectric power in the country and plans are underway to build 45 more.  “In the short term, hydro will clearly continue to thrive especially because it is currently picking up momentum – but this is clashing with the importance of fishing in Burmese culture and the impact of hydropower on people and the environment,” says Razzouk.

Myanmar has the capacity for over 4,000MW of wind power, but the sector remains nascent.

What option does Myanmar have left?

Solar power is an inevitability for Myanmar, says Razzouk. Cheaper than fossil fuels and quickly deployed, solar is also well suited in the Southeast Asian country with its high solar irradiation levels and flat physical landscape.

The Ministry of Electricity and Energy expects solar to account for 5 per cent of the national energy mix by 2030.

Apart from electricity, she points to the need for off-grid technology to provide energy services like clean cooking stoves and heating. At the same time, energy providers must identify and take into account cultural sensitivities through feasibility studies

“Governments need to understand the specific energy services needs in these ‘last mile’ communities in order to solve their energy poverty issues. Reliance on large-scale technologies are often insufficient,” she said. This is especially the case in rural Myanmar, where only a third of its 64,000 villages receives electricity from the grid.

Investments and assistance are trickling in. In 2015, the World Bank launched a US$400 million initiative to finance grid extension and off-grid electrification to encourage the uptake of solar projects in rural areas.

A snapshot of Myanmar’s energy mix in 2011 and 2030, according to the Ministry of Electricity and Energy. Source: Energy Guide 2018, EuroCham Myanmar 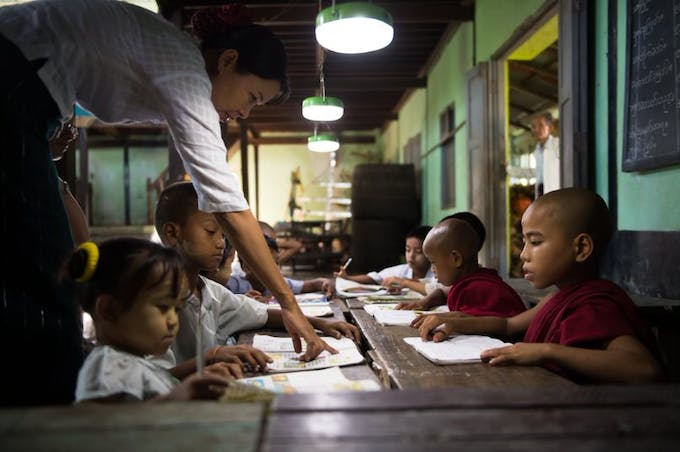 Solar lamps from Panasonic light up a school in rural Myanmar. Image: Panasonic

Pointing to the issue of regulatory frameworks, he adds: “Myanmar’s energy authorities need to accept foreign investment and increase awareness on sustainable energy”. Panasonic’s chief representative in Myanmar, Hirotaka Miura, acknowledges that while these projects are a good start, there is still a lack of awareness on sustainable energy among investors, project developers and energy companies in Myanmar.

If Myanmar is serious about sustainably electrifying its entire population, it must embrace fundamental changes to its energy, say experts.

Sindicatum’s Razzouk says the government must “[make] a concerted effort to tackle corruption, upgrade the currently weak rule of law, as well as upgrade the somewhat outdated regulatory framework for business,” in order to attract foreign investment for electrification.

Clearer government policies, clarity on credit risk for investors, and a smooth process for land and permit acquisitions would go a long way on this front, he elaborates.

It’s been said that children are the future, but what happens when the next generation of humanity is threatened by environmental degradation? Young people in Asia Pacific are calling for climate action to reclaim their future.
The young people calling time on climate change in Asia Pacific

An electrifying solution to improve livelihoods

In line with the Sustainable Development Goals' aim to eradicate poverty, a Japanese multinational electronics firm is providing power supply stations, solar storage and products to countries with little or no access to electricity.
An electrifying solution to improve livelihoods

Power to the people: How light after dark is dimming poverty

Often taken for granted, access to energy is more than about brightening a dark room after sunset—it is a means to a more equitable future. How can energy be delivered to off-grid communities?
Power to the people: How light after dark is dimming poverty