News Lighting the way to a brighter future

It’s been said that children are the future, but what happens when the next generation of humanity is threatened by environmental degradation? Young people in Asia Pacific are calling for climate action to reclaim their future.

From school strikes to pushing back against corporate greed, not since the Flower Power generation of the 1960s have youths been so unwilling to leave adulting to adults, as climate change promises to compromise their future.

No one embodies this call for action better than Greta Thunberg, the plucky pigtailed 16 year-old from Sweden who has become the face of a global youth climate movement. Capturing hearts the world over for her solo crusade outside the Swedish parliament, she has used her growing clout to petition world leaders for deep and urgent reforms.

Most recently, she called on governments and global organisations to move as swiftly on climate change as they have pledged to rebuild France’s Notre Dame cathedral, which was recently destroyed in a fire.

The youth movement in Asia Pacific is picking up pace as Thunberg’s school strike for climate and the newly minted London-born grassroots environment group Extinction Rebellion inspire action on the ground from Seoul to New Delhi.

But in comparison to these two civil disobedience movements that campaign broadly for climate action, youth movements in Asia Pacific are anchored in local environmental issues such as deforestation in Indonesia or the opening of new coal mines in the Philippines.

Eco-Business takes a look at five groups of young people that are determined to make the future greener.

1. Sisters are cleaning up for themselves - Indonesia

Attempting to do what no adult has ever achieved in Bali, sisters Melati and Isabel Wijsen set up their own non-profit organisation to campaign for a plastic bag ban in 2013.

Then only 10 and 12 years of age, the Wijsen sisters’ Bye Bye Plastic Bags initiative has grown rapidly since. They have spoken at 329 events, witnessed the birth of 35 global teams aligned to their mission, and spread the message of how plastics are degrading the environment to 45,000 students.

Bringing together Balinese non-governmental organisations and local businesses in a collective called One Island, One Voice (Satu pulau, satu suara in Bahasa Indonesia) three years ago, the Wijsens organised the island’s biggest beach cleanup. Some 12,000 volunteers picked up 40 tonnes of trash in 55 locations around Bali. Today, the driven young environmentalists are calling on companies to sign a pledge to ditch plastic.

Their efforts seem to have bourne fruit. Bali banned single-use plastics at the end of 2018. Said Melat in a recent interview: “I hope to see a plastic-free Bali 10 years from now and I hope that we have found a way to connect back to Tri Hita Karana, a traditional philosophy and way of living in Bali that my sister and I were brought up with. It means living in harmony with the people around you, the environment around you and the spirit within.” 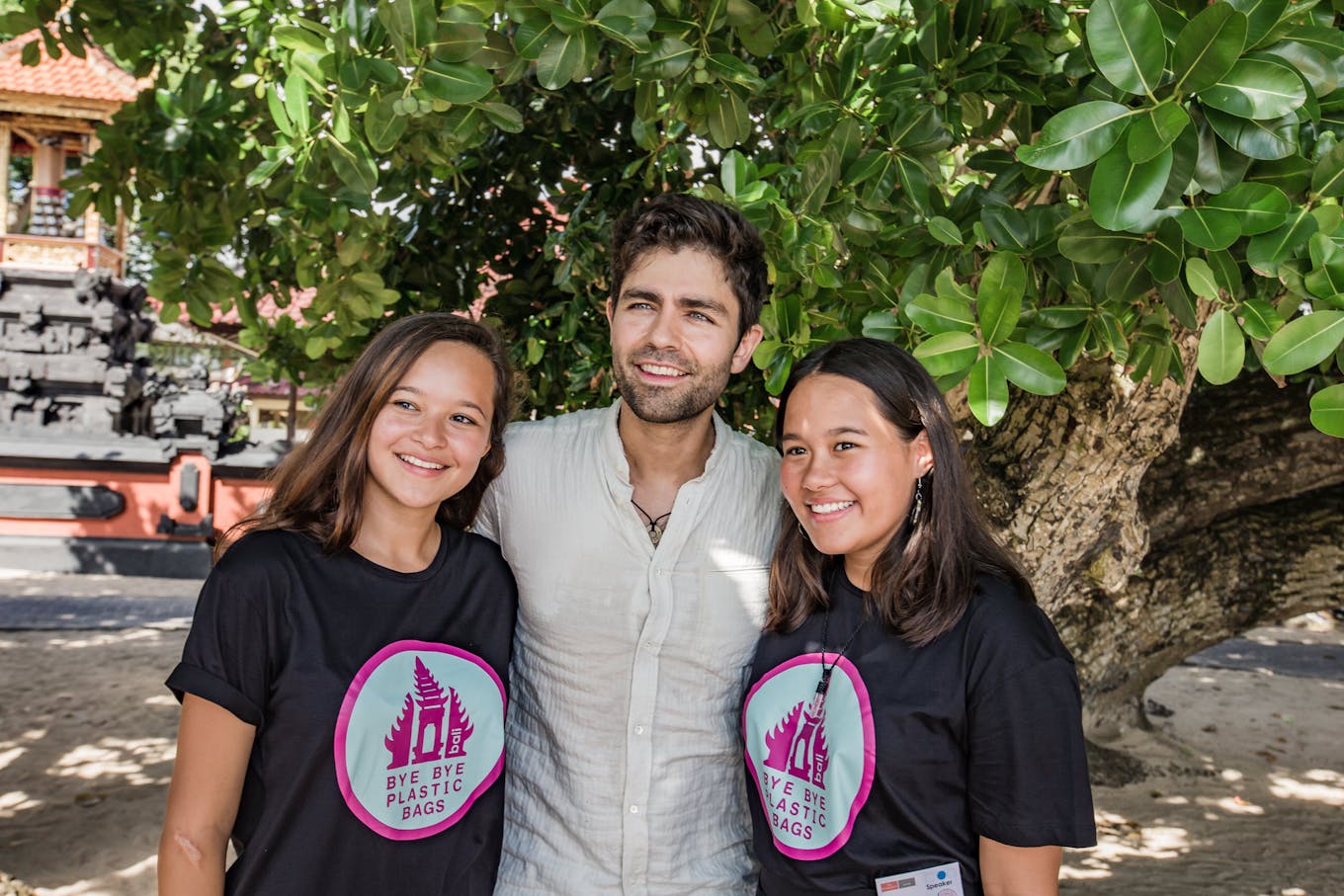 2. Fighting for the trees - Philippines

At 17 years of age, Jason Pul-as is already a veteran environmentalist. His fight began in 2008, after a landslide near a treeless mountain in his hometown of La Trinidad, Benguet in the Philippines killed close to 100 people. Deforestation had removed the vegetation crucial to preventing landslides.

Since then, Pul-as and his companions have gone to court to oppose business and political interests responsible for the felling of the town’s trees, launched protests and street rallies against illegal tree cutting, and spread the message of conservation to the public.

Pul-as’ courageous actions have not gone unnoticed by the powers that be. “I was profiled, unidentified people went to my school and got all sorts of information about me. My mother was warned to tell me to stop protesting,” he recounted to Eco-Business. But this has not deterred Pul-as.

“When you put economy over ecology, it is greed,” he said.

The youthful Extinction Rebels in Australia are literally blocking coal exports from Australia by strapping themselves to trains and railways bridges.

Jaxom Kerlin, 18, climbed on board a coal train in the suburb of Wynnum in Brisbane and brought it to a halt for six hours. The protest was part of Extinction Rebellion’s week of international civil disobedience from 15 April, when protesters live-streamed their activities and police reactions. Kerlin was taken into custody, 26-year-old Alice Wicks took his place and held up trains for another five hours.

In March, 21-year-old Freya Nolin from Fremantle in Western Australia blocked coal trains from entering Adani’s Abbot Point as part of the week-long Shut Down Adani event, to oppose the construction of what will be the world’s largest coal mine. The last of five activists who stopped the transport of coal along the Newslands rail corridor for 75 hours, Nolin was slapped with a A$10,000 (US$7,000) fine.

Nolin said: “We need to be taking urgent action to address the climate crisis. The current political system is totally at odds with what the scientific community is telling us – to rapidly transition away from fossil fuels.”

The daughter of an environmental activist, Ridhima Pandey was nine when she took the Indian government to court in 2017.

In a filing to the National Green Tribunal, a special court that hears only environment-related cases, Pandey accused the government of failing to take action to meet the targets it set under the Paris Agreement.

Speaking to the media, Pandey, who comes from Uttarakhand state in India, said: “My government has failed to take steps to regulate and reduce greenhouse gas emissions, which are causing extreme climate conditions. This will impact both me and future generations.”

Pandey, a citizen of the third largest carbon emitter in the world, is not the first youth to have sued her government for climate inaction. Groups of youths in the United States, Belgium, New Zealand have taken similar action, while young people in Pakistan, Colombia, Austria and South Africa have taken their governments to court – and won.

In the latest update in a campaign that has lasted for two years, student activists from the National University of Singapore (NUS) and sister liberal arts college Yale-NUS last month met with the school administration to ask the university to purge fossil fuel assets from its S$4 billion endowment fund.

Students from Students Taking Action for NUS to Divest (Stand) and Fossil Free Yale-NUS (FFYNC), including final year undegraduate Melody Tay and second-year student Jay Wong, brought a petition signed by almost 800 people asking for the school to sell off its exposed assets. According to FFYNC, they were told this did not demonstrate enough support.

An NUS spokesman told local paper The Straits Times that its exposure to fossil fuel related areas is “very small” and said it would convey the students’ concerns to its fund managers.

Interestingly, in the same week news broke about NUS’ rejection of the divestment campaign, Singapore’s biggest banks DBS and OCBC announced they would no longer finance any new coal-fired power stations. 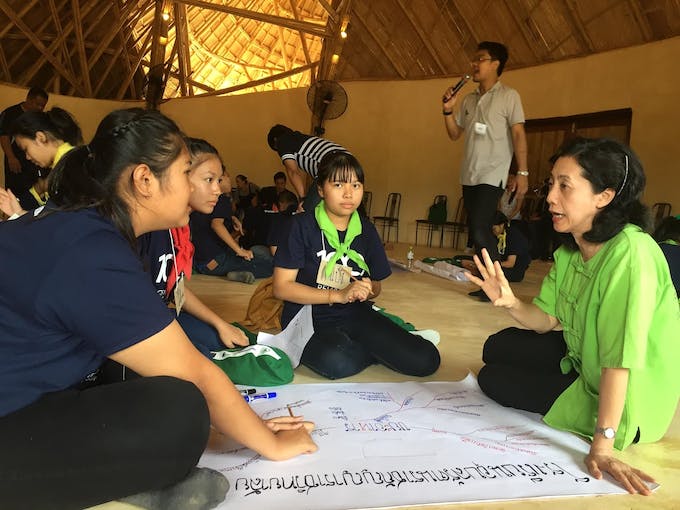 Youth movements across the region demonstrate that the young are a force to be reckoned with as they contemplate a future of sea level rises, dwindling biodiversity, and extreme weather events.

Besides calling on their governments to take action on climate change, the young can also be a force for good through their daily activities, which is why it has been argued that environmental education should start at school.

It prepares students to look at media and information through a critical lens, and can teach students the importance of changing their daily behaviour to reduce their carbon footprint. Programmes like the Low Co2 School Network aim to do this. Operated by Panasonic and its partners FEED and Earth Hour, the programme is now in its seventh year and encourages students across Thailand to live more sustainably and become leaders in their own right.

What is the future of energy for Myanmar's rural population?

To deliver on its goal of 100 per cent energy access by 2030, Myanmar will need to shake up its energy market. With hydropower facing increasing objection from society, how will the former hermit nation power its people for a more sustainable future?
What is the future of energy for Myanmar's rural population?

An electrifying solution to improve livelihoods

In line with the Sustainable Development Goals' aim to eradicate poverty, a Japanese multinational electronics firm is providing power supply stations, solar storage and products to countries with little or no access to electricity.
An electrifying solution to improve livelihoods

Power to the people: How light after dark is dimming poverty

Often taken for granted, access to energy is more than about brightening a dark room after sunset—it is a means to a more equitable future. How can energy be delivered to off-grid communities?
Power to the people: How light after dark is dimming poverty