Lower-income urban communities bear the brunt of environmental burdens, even in wealthy green cities around the world.

The trouble with comparing cities, researchers have found, is you end up comparing apples and oranges—coasts and interiors, seasonal freezes and yearlong tropical humidity, strictly planned communities and suburban sprawl.

It’s even more problematic than that because a city is not defined by a single uniform identity. Each city comprises a unique blend of neighbourhoods where social and environmental conditions can change from street to street.

Given this complexity, how can we possibly assess global progress toward Sustainable Development Goal 11 (SDG 11), making cities inclusive, safe, resilient and sustainable? Can we measure these concepts universally?

Interestingly, stark inequalities are also seen in many cities with high overall environmental performance—wealthy cities that regularly receive plaudits for their green credentials.

“Copenhagen, Paris, and London, even if they’re doing really well overall on environmental indicators—so their air pollution levels are low, they have green space—they’re not providing amenities and environment benefits equally amongst all their citizens,” said Angel Hsu of the University of North Carolina at Chapel Hill, who led the research.

Targets Are Cheap, Data Are Expensive

By 2050, two thirds of the global population—6.5 billion people—will reside in urban areas. With that trend comes a number of challenges with consequences for the planet and urban dwellers.

SDG 11 was developed to address our increasingly urban population and has 10 specific targets for 2030. Many of these have an environmental component.

Targets include all city residents having access to affordable public transport (11.2), adequate waste management systems (11.6), and green spaces (11.7). There is also a crosscutting focus on protecting vulnerable communities exposed to urban hazards such as air pollution.

Few would disagree with these inclusive targets, but it is a challenge to quantify progress in the real world. “The word ‘inclusive’ in itself is very nebulous; what do we really mean by inclusivity? And then you also have to think about how we actually go about measuring it,” said Hsu.

Cost is another challenge. It is expensive to collect granular data at local levels, especially for cities in developing nations. As a result, data reported are inconsistent, and it can be precarious to start comparing urban areas in different parts of the world.

“Rankings can lead to perverse incentives to hide data to avoid negative publicity,” said Jacqueline Klopp, codirector of the Center for Sustainable Urban Development at Columbia University, who was not involved in the UESI project.

Klopp recalled how Dakar, Senegal, was labelled as having some of the worst air pollution in Africa, purely because local officials had made the progressive move of making air pollution data public.

Crowdsourced transport data are collected from Open Street Map. By integrating these data with demographic information, UESI can evaluate global neighborhoods in a consistent fashion.

In the study, published in Frontiers in Sustainable Cities, participating cities are placed within a four-quadrant plot. This plot indicates each city’s overall environmental performance as well as its environmental inclusivity. 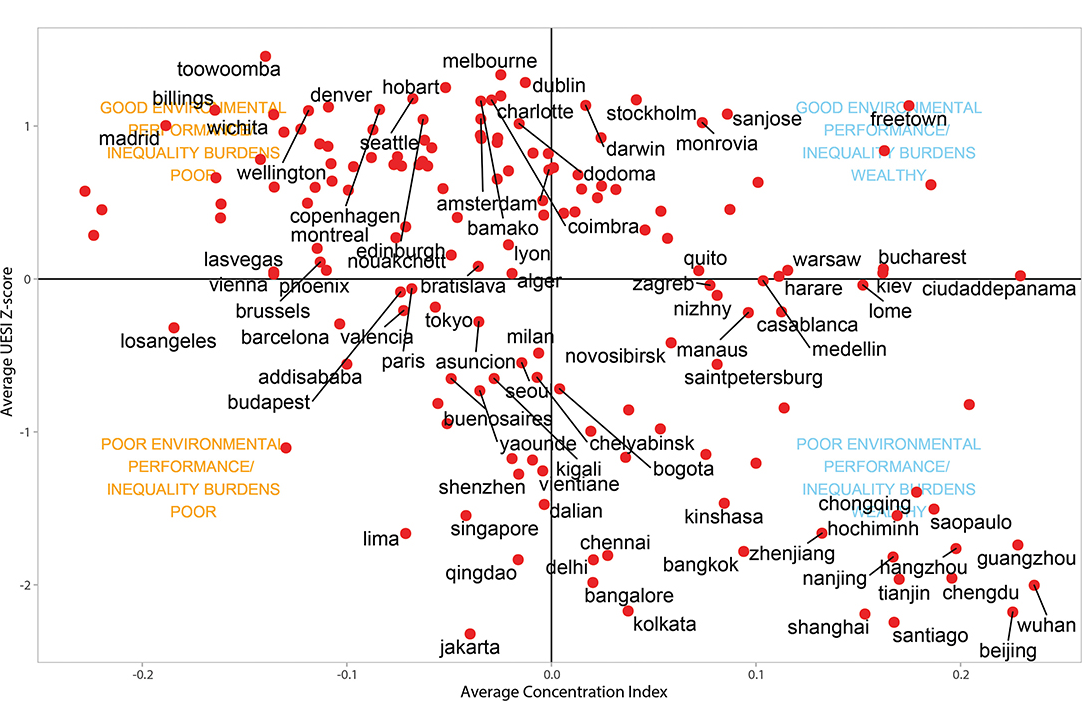 Only a handful of cities scored highly on both environmental performance and environmental inclusivity, including Stockholm, Sweden; Darwin, Australia; Quito, Equator; and Freetown, Sierra Leone. No cities with a population greater than 10 million people made it into this category.

More than half of the 164 cities fell into the category of good overall performance but with lower-income neighbourhoods bearing a disproportionate share of environmental burdens. This group includes Seattle, Copenhagen, and Melbourne—just three among several that regularly appear on “livable cities” lists.

Reasons for these inequalities are linked with local contexts. In inner-city communities, air pollution is often worse, and a lack of tree cover and green space can result in dangerously high summer temperatures through the urban heat island effect.

There are exceptions to this pattern in emerging economies like China and India, however, where inner-city neighborhoods are occupied by wealthier communities.

Full results can be seen on the Data-Driven Lab website, and Hsu said that other locations can be added if city representatives provide basic demographic data.

“The UESI has some important advantages in helping to meet the challenges of measuring progress towards urban elements of the SDGs,” said David Simon, a development geography researcher at Royal Holloway, University of London, who was not involved in the new research.

Simon stresses, however, that ground-truthing will remain essential, given that many phenomena are invisible to remotely sensed imagery.

This story was published with permission from Eos.