Japan, Germany and the United Kingdom have been able to stem the tide of plastic at home, found a study by a UK-based packaging retailer. But have their waste exports to developing countries skewed the picture?

Some of the world’s top waste exporters were already cutting their plastic scraps and ramping up recycling when China banned waste shipments from overseas in 2018, revealed a study by a United Kingdom-based packaging retailer.

Japan, Germany and the UK, along with the United States and Hong Kong, were identified as the top exporters of plastic waste to Southeast Asia by environmental campaign group Greenpeace in a policy brief last year.

But a new analysis by packaging retailer RAJA has found that among the top waste-exporting countries, some have done more to reduce their waste per capita and recover their waste than others.

Japan emerged top in RAJA’s ranking of 29 countries in the Organisation for Economic Cooperation and Development (OECD) which submitted municipal waste generation and treatment data.

RAJA’s analysis took into account figures submitted for five years up until 2017 or 2018. Most of the countries were in Europe, and Japan was the sole Asian country studied. 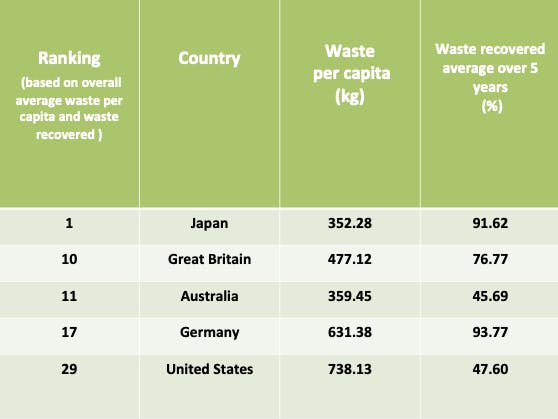 The countries above are the top global waste exporters to Southeast Asia according to a 2019 Greenpeace study. They were among the 29 OECD countries surveyed by RAJA. Image: Eco-Business. Source: RAJA

Germany—which Greenpeace found to be the fourth-largest exporter of plastic waste to Southeast Asia in 2018—was 17th on RAJA’s ranking. It was unable to reduce its waste as much as Japan, generating 631kg per person. But it recovered nearly 94 per cent of its garbage and had the highest recycling rate of nearly 49 per cent.

Britain, which ranked 10th, generated 477kg of waste per capita and recovered about 77 per cent of its waste.

While recycling rates are [relatively] high in these countries, it does not always reflect the true amount of waste that is actually recovered.

The results, however, may paint a skewed picture due to the countries’ export of plastic waste, Angelo Nicoletti, quality control manager of RAJA, told Eco-Business.

“While recycling rates are [relatively] high in these countries, it does not always reflect the true amount of waste that is actually recovered,” Nicoletti said.

“This is because waste is often exported to other countries such as Southeast Asia for recycling, despite the fact that much of it has not been sorted properly and is therefore classified as landfill. This not only puts an unfair burden on other countries, but can also make their own recycling results skewed.”

Developing countries that ended up with the trash saw the amount of waste in their landfills “skyrocket” due to the amount of unrecyclable waste in shipments, said RAJA.

The picture also becomes less rosy when other statistics are taken into account.

For instance, although Japan has managed to reduce its waste, this has been done largely through incineration. It burned an average of 71 per cent of its waste over 2013 to 2017, according to RAJA.

Incineration is frowned upon by environmentalists who say it merely transforms waste into ash, slag and air and water pollutants, which are more toxic than the original waste.

It is not a solution to stemming plastic waste, and neither is collection and recycling, said Hiroaki Odachi, plastics campaigner of Greenpeace Japan.

“While there has been so much focus on recycling, it is obvious that we cannot recycle our way out. Plastic waste export is one of the symptoms (of the problem),” Odachi said.

Under a pay-as-you-throw model for municipal waste, users are charged a rate based on how much waste they produce.

The German city of Dresden was the first in Europe to put in place an electronic identification and billing system for waste disposal in 2004.

Another initiative is the country’s famous Green Dot system where manufacturers and retailers put a green sticker on products to show a fee has been paid to fund its recycling. The project, which was first started in the early 1990s, prompted manufacturers to cut down on packaging, and consumers to recycle it.

Despite the country’s advances in waste management, Simon said Germany still exports waste and it is not possible to trace if it is indeed being recycled by the recipient country.

“Most of the time, the plastic waste is not recyclable in the first place… It is possible to export waste as a way to increase recycling rates, when in reality, it is being dumped,” Simon said.