The Philippines is not a garbage dump for rich nations, environmentalists warn

Amid tensions between the Philippines and Canada over garbage sent illegally to Philippine ports six years ago, more trash shipments have arrived from Australia and Hong Kong. Activists are calling for the ratification of the Basel Convention, which prohibits plastic waste imports. But will this solve the problem?

This was how Greenpeace activists described the shipment of 211 tonnes of waste from Australia that arrived in the Philippines on 7 May.

“Why do we need to repeatedly remind the world that we are not a garbage dump? Illegal waste dumping  in developing countries should be stopped at all costs. We refuse to be treated as rich countries’ trash dumps,” said Abigail Aguilar, campaigner for Greenpeace Southeast Asia, a green group.

Inspected on 23 May, the 40-feet container vans carrying “municipal waste or processed engineered fuel (PEF)” were destined for Holcim Philippines, which the cement manufacturer said it was going to use as alternative fuel for producing cement. 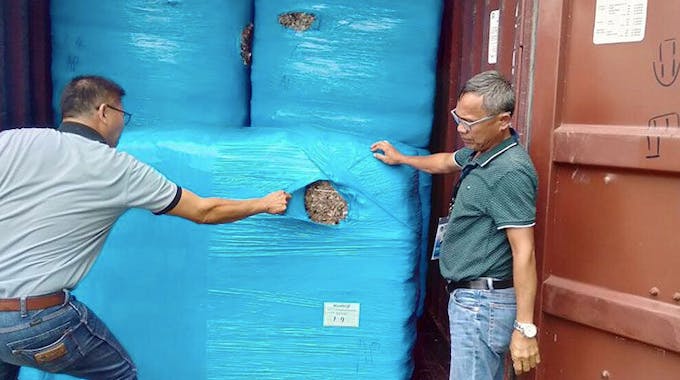 But the use of waste-to-energy is illegal in the Philippines under the Clean Air Act and the Ecological Solid Waste Management Act, which bans waste incineration, said Aguilar.

The prominent environmental watchdog added: “Waste-to-energy technologies harm our people and our environment, and further contribute to the destruction of our climate. These types of technology have no place in a country that struggles from the effects of the climate crisis.”

In the same week that waste was intercepted from Australia, 40-feet container vans with 26 tonnes of mixed plastic were found at the same Mindanao port, this time from Hong Kong.

The cargo was shipped by Chinese firm Hin Yuen Tech and was consigned to Crowd Win Industrial Limited, a Filipino conglomerate with businesses in entertainment, agriculture, and real estate. The shipment was erroneously declared as “assorted electronic accessories.”

Why do we need to repeatedly remind the world that we are not a garbage dump?

“We are shocked that the shipment originated from Hong Kong, which we find truly ironic since China has taken the unprecedented move to protect its own environment by banning waste imports, including electronic and plastic scraps and remnants,” said Aileen Lucero, national coordinator of Philippines-based green group EcoWaste Coalition. “We therefore request the Chinese government to seriously look into this matter.”

China enacted a national policy that put in restrictions on imports of recyclable paper and plastic in January 2018. Since then, industrialised nations have looked at China’s Southeast Asian neighbours such as the Philippines, Malaysia and Thailand as alternatives to ship their waste.

The shipments go against the Basel Convention, an international treaty that protects developing countries from illegal dumping of hazardous and other waste from the developed world. 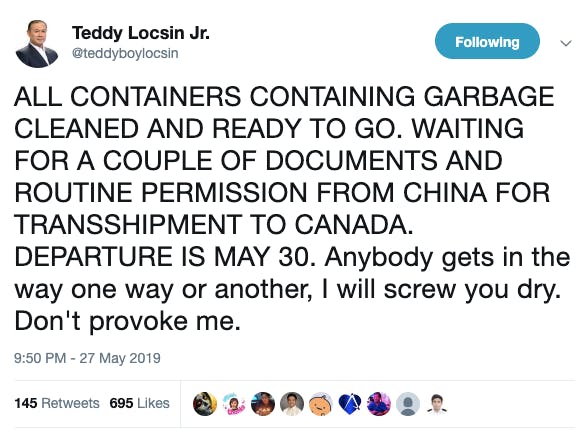 Foreign Affairs secretary Teodoro Locsin, Jr. announces on his Twitter account that the controversial trash containers are set to leave for Canada on 30 May, hoping to break a six-year deadlock over garbage from Vancouver that was illegally sent to local ports.

The discovery of imported waste from Australia and Hong Kong comes as the Philippines continues to engage in a 6-year garbage row with Canada.

The Philippines has repeatedly asked Canada to repatriate the remaining 69 of the 103 container vans that came illegally to Manila and Subic ports in 2013.

Last week, President Rodrigo Duterte ordered the return of the trash, even threatening last month to dump some of the garbage at the Canadian embassy in Manila.

Duterte gave the Canadian government until 15 May to take back the trash, but when it missed its deadline, foreign affairs chief Teodoro Locsin, Jr. recalled the Philippine ambassador and consuls from Canada.

Canada finally ordered the shipment of the remaining containers initially for June, but Locsin has announced on Twitter that it will be done this week.

Earlier this year, the Philippines shipped back to South Korea 6,500 tonnes of mixed waste which was misdeclared as plastic flakes and did not have proper importation permits. However, according to Philippine customs officials, there were still 10 containers from Korea sitting in Manila ports.

Will the Basel Convention solve the world’s waste problem?

Greenpeace called on the Philippine government to avoid future waste import scandals by ratifying the Basel Convention, which was amended in Geneva this month to prohibit the importation of mixed, unrecyclable and contaminated plastic waste without first obtaining permission from countries receiving the trash.

Activists have accused Canada of violating the Basel Convention of which both Canada and the Philippines are signatories.

“Ratifying the Basel Convention will plug the loophole that allows the shipment of other forms of hazardous waste under the guise of ‘recycling’,” said Aguilar. “Recyclable or not, trash is trash, and we as a country should be steadfast in refusing its entry to our shores.”

There needs to be a concerted investment to build a regulated, responsible treatment facility in each region.

However, a sustainable waste management expert from Singapore-based Blue Planet Environmental Solutions (BPES) said the treaty will not solve the problem.

Martin Blake, strategic advisor to BPES, said that ratification of the treaty will make all signatories legally bound to follow regulations on waste importation, but countries might try to find a black market alternative to ship their waste overseas.

“There needs to be a concerted investment to build a regulated, responsible treatment facility in each region,” Blake told Eco-Business.

Blake added that although it is cheaper for developed countries to send their waste somewhere else, the garbage just ends up in locations where it is treated in a very unsafe way for people and the environment.

“It’s about time plastics be given an ascribed market value so that they can be recycled properly like tin cans and precious metals. Otherwise, it will just end up in the sea,” he said.