Months after the world’s biggest corporates agreed to develop a treaty to stop plastic pollution, experts examine solutions that corporates have claimed will be able to stem the global waste issue.

With some of the world’s biggest corporates agreeing to develop a treaty to bring an end to the scourge of plastic pollution early this year, anti-plastic advocates are keeping a watchful eye on firms if they will truly start to reduce their dependence on plastic production.

“We remain hopeful but also cautious, especially with corporates which have made commitments before but later moved goal posts, when the targets they’ve made were not achievable,” said Miko Aliño, project coordinator for corporate accountability of Break Free From Plastic (BFFP), an anti-plastics movement of more than 11,000 organisations around the world.

Consumer goods giants Coca-Cola and Unilever, which emerged in the top three of global plastic polluters in an annual audit of plastic debris found on coastal areas last year, were two of the 70 signatories asking the United Nations for a global agreement. They ask that a legally binding treaty helps to reduce virgin plastic production and use and that it aligns regulatory measures that cover the whole life cycle of plastics.

What makes this treaty different is that it addresses the full lifecycle of plastic, including production, design and disposal, unlike other resolution versions which only include marine plastic debris, said Aliño.

As an agreement to address the growing problem of plastic waste in the world’s oceans is hoped to be reached by the end of 2024, experts weigh in to examine solutions that corporates claim to help curb the world’s plastic blight.

When beverage giant Coke unveiled its prototype bottle made from fully plant-based plastic in October, critics questioned if it was really better for the environment than traditional plastic packaging.

Coke’s new bioplastic bottle is made from corn sugar instead of fossil fuels like traditional plastic, but it still does not help reduce waste, said Emma Priestland, corporate campaigns coordinator of BFFP.

She cited studies that show how bioplastics are just as harmful or even worse than conventional plastic when it comes to energy use, air pollution, climate change, and toxic effects on animals and plants.

“This is partly due to fact that agricultural products used to make bioplastic are rarely farmed sustainably. There is still a lot of input in terms of fertilisers and biocides like disinfectants, [also the possibility of] deforestation to grow those crops, or we can be taking away crops from food production to replace those crops for producing plastic instead,” Priestland said in a media forum.

[Bioplastic] has a very important effect on the carbon footprint of the material, and therefore on its effect on the production of greenhouse gases, and finally as one more agent that would promote climate change.

However, bioplastics remain a “correct alternative” to conventional plastics because they are made from renewables instead of fossil fuels, said Mario Grimau, a polymer engineer and materials science specialist at Spring, a United States-based sustainable packaging think tank.

“In the case of biobased plastics, the aim is not to modify waste management at the end of life, but to change the origin of the material, radically changing the use of fossil hydrocarbons for biomass,” Grimau told Eco-Business.

“It has a very important effect on the carbon footprint of the material, and therefore on its effect on the production of greenhouse gases, and finally as one more agent that would promote climate change,” he added.

Coke’s fully plant-based bottle comes after more than a decade after the company debuted it’s first recyclable plastic bottle made with up to 30 per cent plant-based material. Despite varying opinions on the packaging, the firm still considers the innovation an “important milestone”.

“We have been working with technology partners for many years to develop the right technologies to create a bottle with 100 per cent plant-based content—aiming for the lowest possible carbon footprint—and it’s exciting that we have reached a point where these technologies exist and can be scaled by participants in the value chain,” Nancy Quan, Coke’s chief technical and innovation officer said in a statement.

2. Replacing plastic for paper or wood 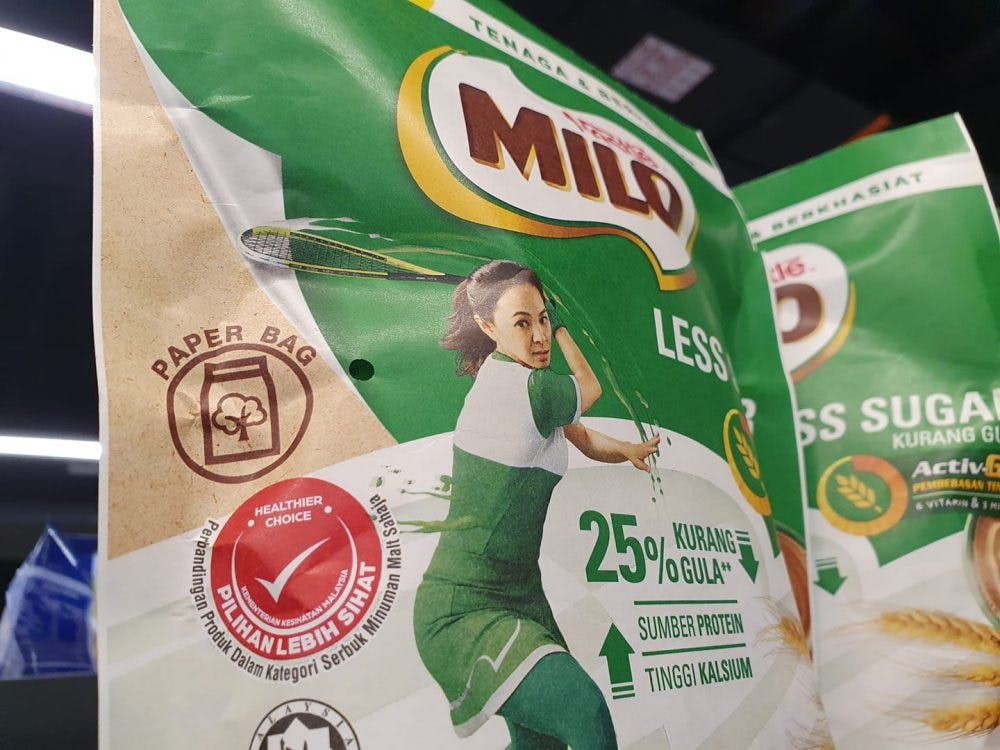 Nestlé Malaysia has switched to the use of paper bag packaging for one of its Milo dpowdered drinks. Image: Minimeinsights.com

Food and beverage conglomerate Nestlé, which consistently ranks among the top plastic polluters in brand audits conducted globally, announced in Malaysia that chocolate malt beverage Milo would be sold in paper pouches instead of plastic and aluminum film that fast moving consumer goods companies usually use to package their products. Milo’s packaged drinks will also be sold with paper straws, similar to the initiative of fast food chain McDonald’s.

“[Certifications] can be a useful tool but even the most stringent FSC-certified fiber does not address the fundamental impacts that any sort of logging has on forest ecosystem services, considering the state of our forests,” she said.

According to an assessment released by the United Nations last year, the world has lost one third of its forests—an area twice the size of the United States. Half of this loss occurred in the last century alone, borne out of the growing demand for agricultural land.

Responsible logging schemes are also unable to meet any additional demands, with the limited supply of sustainable fiber leading companies to rely on different certification schemes that are weaker, she added.

Environmentalists in the Philippines called out Nestlé for declaring plastic neutrality in 2020, without having any plans to reduce its litter.

Nestlé Philippines chairman and chief executive Kais Marzouki was quoted in local media, saying that the company succeeded in collecting and diverting from landfills and the ocean the amount of plastic equivalent to what it generated from its packaging that month, making the firm plastic neutral. In that month alone, the company recovered 2,400 metric tonnes of plastic waste.

Plastic neutrality is when companies buy plastic credits to offset the plastic waste they are generating. One credit often equals one metric tonne of plastic.

We see that plastic credits don’t actually reduce plastics in the system but it’s just a way to balance out the plastic waste generated and allowing pollution in one location to continue as long as it’s offset by reductions in another location.

“Companies buy these credits to justify their claim of plastic neutrality, giving the impression that they have reduced the amount of plastic waste produced,” said Priestland.

“We see that plastic credits don’t actually reduce plastics in the system but it’s just a way to balance out the plastic waste generated and allowing pollution in one location to continue as long as it’s offset by reductions in another location.”

She also noted that the plastic credit market is very new, with no single global standard to determine how a credit is defined, verified or tracked, leaving it “very open to abuses in the system”.

Marzouki said while the company is working on packaging innovations and alternative materials for plastic reduction, they are “determined to look at every option to solve complex packaging challenges and embrace multiple solutions that can have an impact now” through the plastic credits programmme. 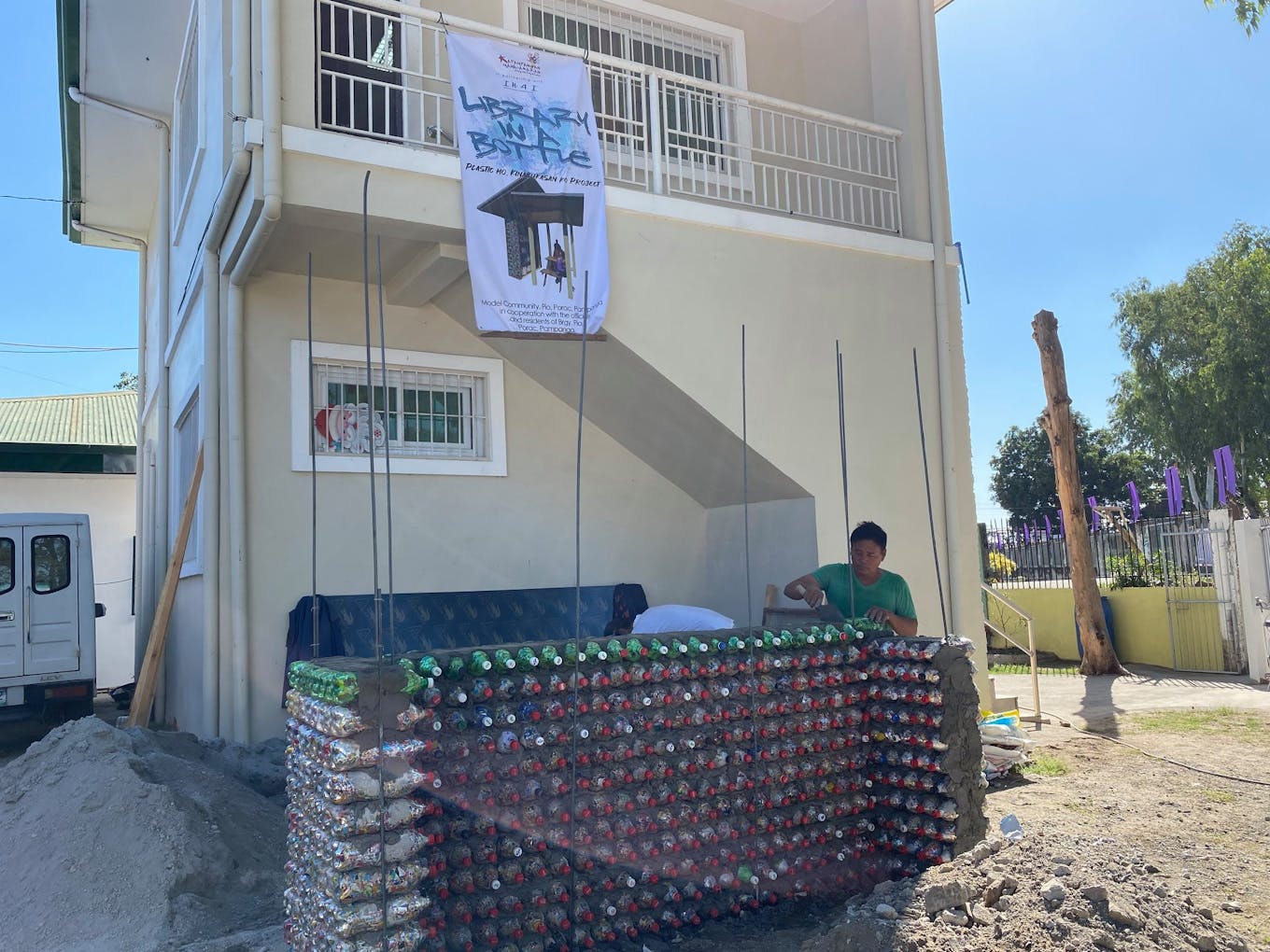 A library being built out of eco-bricks in Porac, Pampanga. Image: Beyond Ecobricks Philippines Facebook page

Snack Food company Mondelez Philippines announced in March last year that it would invest in plastic waste management by recycling waste into eco-bricks or building blocks made entirely from unrecyclable plastic. It is created by filling a plastic bottle with clean and dry material until it’s packed tightly and can be used as a building block.

But what is not factored in the process of making eco-bricks is the melting of the packaging wastes which emit toxic gases that could cause serious health impacts on the workers and the communities, said Merci Ferrer, convener of War on Waste of BFFP.

“Eco-bricks are a stop gap solution that don’t actually don’t solve the issue of plastic waste. Instead of redesigning containers, you actually prolong plastic leakage into the system and perpetuate use of all these single-use, multi-layered plastic packaging,” she said.

Consumer goods multi-national Procter & Gamble, which has been facing pressure to deal with waste generated by its top products including diapers and sanitary pads, entered into an agreement with a chemical recycling company in August.

Chemical recycling makes use of molecular recycling technology that can break down and repurpose plastic materials, which would otherwise be unsalvageable.

Critics were quick to point out that the chemical recycling industry’s multi-step incineration processes are polluting and generating greenhouse gases without alleviating virgin plastic demand.

“[Chemical recycling’s] proposed circularity and sustainability is hampered by the infrastructure needed and enormous amounts of energy required for the operations,” said Priestland.

Energy is needed to sort the feedstocks, to run the machinery, to provide large amounts of heat for thermal treatment and to clean the toxic by-products created in the process, which all contribute to carbon emissions, she added.