Unilever, a sponsor of climate conference COP26, debuts in the top three plastic polluters, joining Coke and Pepsi which have been sitting in the top spots for four consecutive years.

Consumer goods giants Coca-Cola, Pepsico, and Unilever emerged as the world’s biggest plastic polluters, according to an annual survey of plastic debris found on city streets, parks, forests, beaches, and coastal areas around the world.

Coca-Cola and Pepsico have topped the global plastic polluter audit, conducted by a network of environmental groups running cleanup operations for the fourth year in a row, but it is the first time for Unilever to claim the third spot.

The plethora of plastic littering the planet continues despite efforts by the three firms to recover and remove from the environment the same amount of plastic waste they have created.

Coca-Cola, whose plastic items where more than the next two top polluters combined, committed to collect one bottle for every one sold by 2030. Pepsico vowed to halve its use of virgin plastic by 2030, while Unilever made the same pledge to be achieved by 2025.

The report called Unilever’s rise in the ranking an “egregious development” as the company is serving as principal sponsor for next week’s climate talks at the 26th Conference of Parties (COP) in Glasgow, Scotland. 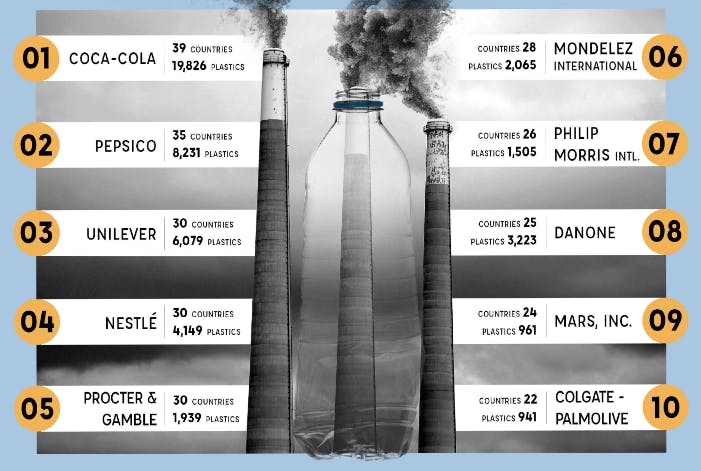 “It is doubly worrying that these are the same companies that spend millions or billions in an attempt to fool the public through their false claims on ‘plastic neutrality’ and lip-service commitments on combating the climate crisis,” said Jefferson Chua, campaigner of Greenpeace Philippines, which is part of the campaign of Break Free From Plastic, a global movement of non-governmental organisations advocating against new plastic production.

“These actions provide little to no benefit in the people’s fight against the plastic crisis. Instead, they’re causing further destruction as they resort to harmful methods, such as waste-to-energy incineration and co-processing,” Chua added.

The same companies were found to be responsible for burning plastic in developing countries producing significant air pollutants and greenhouse gases in a report released in March last year by international development and relief agency, Tearfund.

These are the same companies that spend billions in an attempt to fool the public through their false claims on ‘plastic neutrality’ and lip-service commitments on combating the climate crisis. These actions provide little to no benefit in the people’s fight against the plastic crisis.

Together with Break Free From Plastic, Greenpeace administered 440 cleanups in 45 countries from August to September this year, picking up 330,493 pieces of plastic, 58 per cent of which was marked with a clear consumer brand.

The Break Free From Plastic report called on governments to hold corporations accountable for their pollution, as voluntary corporate commitments are failing to reduce their litter. Focusing solely on waste management and recycling does nothing to address the upstream climate impacts of plastic production, it read.

Greenpeace Philippines renewed its call for local lawmakers to finalise the nationwide single-use plastic ban, which was approved by Congress in July, and is pending assent by the Senate, before it is signed into law by the president. The bill sets a gradual phase-out period for different plastic products and imposes accountability on plastic producers and manufacturers.

Malaysia is the only country in Southeast Asia to approve a nationwide plan in taking bold action to tackle plastic pollution.

The Chinese government announced a scheme to ban non-biodegradable bags in all cities and towns by 2022 while states in India are enforcing existing rules on the storage, manufacturing and the use of some single-use plastics instead of a nationwide ban.

The Global Alliance for Incinerator Alternatives (GAIA), which is also part of the Break Free From Plastic campaign, released a report on Monday that analysed the targets set by 99 governments to reduce harmful greenhouse gases known as the “nationally determined contributions” (NDCs). It found that only 11 NDCs, including those set by Sri Lanka, United Arab Emirates and the Maldives, have proposed strategies to directly tackle plastic waste, while none propose to restrict plastic production.

Dr Neil Tangri, science and policy director of GAIA, said: “With the climate crisis growing more urgent and deadly everyday, governments are missing an important chance to employ zero waste as a common sense, affordable strategy toward zero emissions and a sustainable economy.”