Activists want roads in the Philippines to cater to the greater number of cyclists, as well as better support for jeepney and taxicab drivers to follow safe distancing measures.

As roads in the Philippines get a breather from choc-a-bloc traffic amid Covid-19 lockdowns, mobility advocates are pushing for better bicycling infrastructure and a fairer system of compensation for jeepney and taxicab drivers in the country.

Like many cities around the world, movement restrictions to curb the spread of the coronavirus led many urban residents in the country to turn to a form of zero-carbon transport: The bicycle.

In Metro Manila, the authorities imposed a total ban on public transport at the height of the pandemic in March. Now undergoing a second lockdown that will last until the end of this month, the region has seen the frequency of buses, trains and jeepneys reduced drastically.

This means less access to mobility for the 27 million people living in and around the capital city, as only 11.5 per cent of Metro Manila households own a car, said Jedd Ugay, transport economist and spokesperson for Move as One, a 134-member coalition of mobility advocates.

If the supply of public transport is not enough to provide essential trips like buying food and medicine, and accessing jobs for the majority of Filipinos, then liveability for these people goes down drastically.

Jedd Ugay, transport economist and spokesperson, Move as One

“If the supply of public transport is not enough to provide essential trips like buying food and medicine, and accessing jobs for the majority of Filipinos, then liveability for these people goes down drastically,” Ugay told Eco-Business.

The coalition initially proposed to lawmakers a US$2.26 billion stimulus package to improve road infrastructure so that more commuters would be able to use public transport instead of private vehicles.

But the national government’s urban mobility budget was slashed to US$205 million, prompting the coalition to prioritise bike lane infrastructure and the widening of sidewalks for pedestrians.

Metro Manila recently began implementing temporary bicycle lanes on a portion of the Philippine capital’s main thoroughfare, Epifanio Delos Santos Avenue (EDSA). The department of transportation said it is seeking a US$21 million budget to roll out bike lanes along the entire stretch of EDSA, as well as 644 kilometers of other major roads in the capital region.

In Pasig, one of Metro Manila’s most populous cities, the local government has proven that it can increase support for cyclists without having to rely on the national budget.

It has had a bike sharing scheme since April last year. But since the height of the pandemic in March, the programme has been temporarily suspended and the bicycles have been allocated to the city’s government and health workers, according to the Pasig City Transport office. 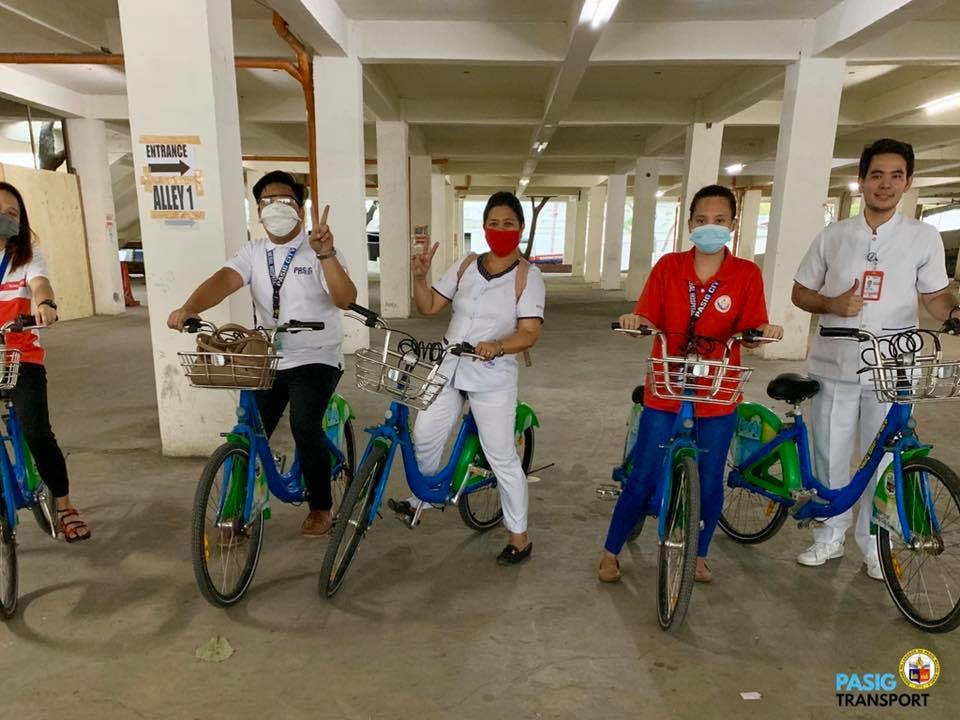 At the height of the outbreak in March, Pasig City temporarily repurposed its bike share units to help essential frontline government personnel and health workers get to work. Image: Pasig Transport

The suspension of public transport displaced 45 per cent of the metropolis’ workers that rely on public buses and jeepneys. But with the introduction of facilities for biking such as protected lanes and parking, the city government said it expects more people to consider active mobility during the pandemic era.

The city has declared biking an essential form of transportation and expects more residents to get around on pedal power. Bicycle repair and maintenance shops, which are normally classfied as non-essential and were ordered shut in other cities, will be allowed operate during the quarantine.

Ugay said groups advocating for frontline workers are pushing for better biking infrastructure so that these workers can keep themselves and others safe by not taking the bus or train.

However, there have been more frequent reports of cycling-related fatalities in the city. For instance, a community doctor was hit by a truck on her way to work in April, while a nurse  was killed in a hit-and-run accident just days after he bought a new mountain bike in August.

As ridership dips on taxicabs and jeepneys with more people staying home, Move as One is also pushing for a payment system for drivers that promotes safer driving habits and is not dependent on passenger fare revenue.

The majority of jeepneys and taxicabs in the Philippines operate according to the boundary system, in which drivers rent the vehicles, shoulder the costs of fuel and light maintenance and earn money from passenger fares.

In the Covid era, this is worrisome as drivers who follow social distancing rules and pack fewer passengers in their vehicles lose out, said Ugay.

There are some cities that have a service contracting programme where operators are not paid by passenger revenue, but by the local government unit or private entity that contracts them. 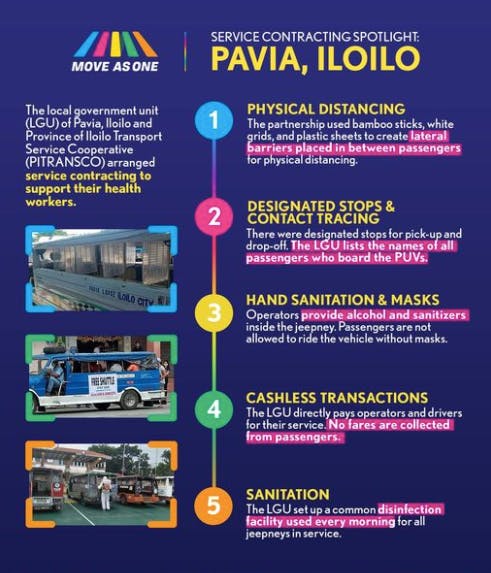 To help jeepney drivers and transport workers who lost their income in the pandemic, Pavia LGU contracted the service of Province of Iloilo Transport Service Cooperative (PITRANSCO) to transport health workers to work. Image: Move As One

In Pavia City, Iloilo in the Visayas region, the local government pays operators and drivers a per-kilometer fee to ply their routes instead of the traditional model of collecting payments from passengers, who are mostly healthcare workers.

Also in the Visayas region, a private company in Danao City in Cebu contracted traditional jeepneys to transport more than 20,000 of its employees to work.

“The city or the private entity pay drivers a fixed salary so they do not have to depend on the boundary system where the more passengers there are, the better,” he said.

Electric jeepneys have also been contracted by the cities of Las Piñas and Muntinlupa in Metro Manila to provide free rides for frontliners.

The modern jeeps have cashless payment transaction equipment where tap cards with stored value are used for fare payment to eliminate the exchange of cash.

Up to 500 tap cards with US$1 stored value have been donated to health workers and government employees, apart from the free rides they continue to get, said Cyril Aguadera, sales head of Australia-based solar company Star 8 Green Technology Corp, which has supplied the electric and solar-powered jeepneys.

An automated fare collection system is one of the requirements of the country’s public utility vehicle modernisation plan, so that passengers no longer have to manually hand over cash to the driver.

As part of the modernisation plan, e-jeepney drivers receive a fixed salary of at least US$270 per month, depending on their experience. Although this amount is lower than the US$750 that drivers might earn in a good month under the boundary system, they get employment benefits such as overtime pay, social security, housing and healthcare insurance.

Currently, drivers under the boundary system get to keep whatever they collect in fares, after paying about US$18 a day to rent a jeepney.