Food prices have been rising in double-digit figures since August 2019, with incomes falling due to the Covid-19-induced economic downturn.

Life was not as hard two years ago as it is today for Tariq Mahmood, a 39-year-old taxi driver in Islamabad, Pakistan’s capital city. He works seven days a week for 12 hours a day but rarely has more than a few hundred rupees (a couple of US dollars) left after feeding his family.

Mahmood said he has not felt this dejected by his dwindling finances in the past 14 years. For cab drivers like him the real culprit is not Covid-19, which shut down businesses, or the advent of ride-sharing services, which siphoned off customers, but spiralling food prices.

“I cannot afford the education of my child after paying for food for the family,” Mahmood told The Third Pole.

He lives in a joint family house in the outskirts of Islamabad, where the public school is currently closed due to Covid-19. He cannot afford any of the private schools that are offering online classes to their students.

“All my savings dried up during the lockdown and now I’m trapped under a mountain of debt,” he said.

Food access in Pakistan is mostly linked to the income of the population. The income losses due to Covid-19 may increase food insecurity.

The rising cost of food

These problems existed before the pandemic hit.

“The number of poor in the country will reach 75 million by the end of this year,” Hafiz Pasha, an economist and former finance minister told The Third Pole.

Pasha said that the living standards of over 20 million people improved from 2013-18 and the number of people living below the poverty line fell to 55 million from 75 million. “Stability in food prices and increase in per capita income were the major factors behind the change,” he said. The gains are now fading as tens of thousands of people lose their jobs.

Data from the International Monetary Fund (IMF) slightly contradicts Pasha’s claim, as it shows a decline in unemployment between 2017 and 2019, although it is now rising. 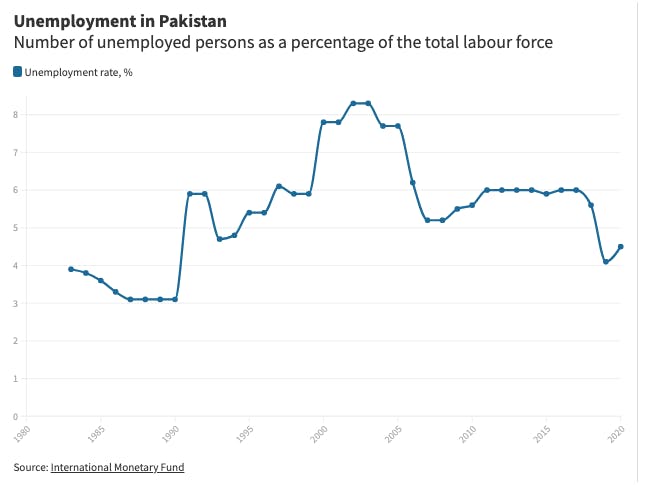 Pakistan ranks 88th out of the 107 countries assessed in the Global Hunger Index 2020. According to the State of Food Security and Nutrition in the World report for 2020, prevalence of undernourishment in Pakistan is 12.3 per cent and an estimated 26 million people in Pakistan are undernourished or food-insecure.

“Food access in Pakistan is mostly linked to the income of the population. The income losses due to Covid-19 may increase food insecurity,” Minà Dowlatchahi, the FAO representative in Pakistan, told The Third Pole.

In January, inflation was recorded at a nine-year high at 14.6 per cent and Prime Minister Imran Khan promised to bring down food prices. But high food inflation is becoming a rallying cry as an 11-party alliance of opposition parties builds momentum to dislodge Khan’s government.

“The government is fully aware of the impact of food inflation, particularly on lower-income classes in Pakistan,” Syed Fakhar Imam, minister for food security, told The Third Pole.

“The Ehsaas programme has covered 16 million families and disbursed PKR 12,000 (US$75) per family, and that mitigated some of the difficulties of the lower-income groups,” he said.

The government’s Ehsaas programme aims to reduce inequality and invest in people in line with the promise of making the country a welfare state. It has more than 100 policy actions, including the provision of cash support, health, food and shelter.

The Ehsaas Emergency Cash programme was launched amid the national lockdown in March to offer immediate relief in the form of a cash grant to the poorest and hardest-hit families.

The minister said that government policies, particularly subsidies on essential commodities, have mitigated “food insecurity to a large extent”.

“There should be a targeted subsidy instead of thinly spreading resources since food inflation definitely constitutes food insecurity because of its regressive impact,” he said, explaining that people on low incomes have to spend a bigger share of their earnings on food.

The government has announced a subsidy on wheat of around PKR 98 billion (US$611 million) to keep flour prices stable, he said, adding “We need to identify households who need subsidy instead of giving subsidy to 220 million people.”

Pasha, the former finance minister, said that a major reason for food price inflation is increasing input costs for agriculture over the past two years. The cost of gas and electricity has risen, tied to an IMF aid package negotiated in 2019. Higher fuel prices and the devaluation of the rupee have led to a rise in costs in both fertiliser and seeds.

Prices increase more in rural areas because commodities are diverted to cities due to higher profit margins, and because of the higher cost of imported items like pulses and cooking oil, Pasha said.

Low yields and production losses due to climatic changes have also had a detrimental impact on commodity prices. This was reflected in wheat prices after the country missed its production target: in 2019-20, wheat was grown over 8.90 million hectares with anticipated production of 27 million tonnes but the target was missed by 1.5 million tonnes, according to data shared by the National Agriculture Research Council (NARC) with The Third Pole.

According to the UN Food and Agriculture Organization, climatic shocks, low crop yields because of traditional agricultural practices and limited use of technology are important contributors to agriculture’s declining contribution to the economy – now at 19.3 per cent of GDP. Dowlatchahi said that the recent heavy monsoon rains and flooding contributed to the country’s poor food security.

“Agriculture has not been a priority of the governments,” said Zahid Bhurgri, a farmer and general secretary at the Sindh Chamber of Agriculture.

In 2019, the government took drastic policy decisions to secure a US$6 billion aid package from the IMF and then resisted farmers’ demands to factor high-input cost into prices, particularly of wheat.

In November, he said, a farmer was killed when police used force to disperse farmers protesting in Lahore for their rights.

“We can guarantee exports of US$20 billion if we [the agriculture sector] get the much-needed support,” he said.

In the 2016-17 financial year, Pakistan imported food and agricultural products worth USD6.7 billion.

Bhurgri said that agriculture suffers from a lack of research and referred to TJ-83, the only late variety of wheat available to farmers in Sindh for the past 37 years.

“How can we match the production of neighbouring counties where new seed varieties have been introduced in accordance with climate change?” he asked.

Shamimul Sabtain Shah, the director-general of NARC, listed spending on research, high pre- and post-harvest losses and low crop diversification among the reasons for low productivity.

Suleri, from the SDPI, stressed the need for changes in cropping patterns in accordance with climatic changes, but Shah said there is a low crop diversification due to the costs and benefits that farmers have to weigh up.