Has cheaper energy come to the Philippines?

Filipinos pay the second-highest electricity prices in Asia. Thanks to a start-up, business consumers in the country are now able to receive competitive bids in real time from electricity suppliers. This has slashed their electricity costs by 10 per cent on average. Are households next?

A camp he attended in 2015 inspired then-undergraduate Sergius Angelo Santos to find a way to offer cheaper electricity to Filipino consumers.

Sponsored by a leading power generation firm, the camp gathered some of the Philippine capital’s brightest students. Through workshops, they were exposed to different aspects of the power industry, including economic and political issues related to energy management in the country.

Santos learned that the Philippines had the second-highest electricity prices in Asia, and that this had prompted multi-national companies to move production abroad because of subsidies and incentives that governments elsewhere offered to energy consumers. Unlike its Asian neighbours Thailand, Indonesia and Malaysia, electricity rates in the Philippines are not subsidised by the government.

“High electricity rates in the Philippines have also been stifling the growth of many small and medium enterprises and preventing manufacturing companies from further expanding (locally), hence, opting to just outsource production abroad,” Santos told Eco-Business. “This was what motivated me to find solutions.” 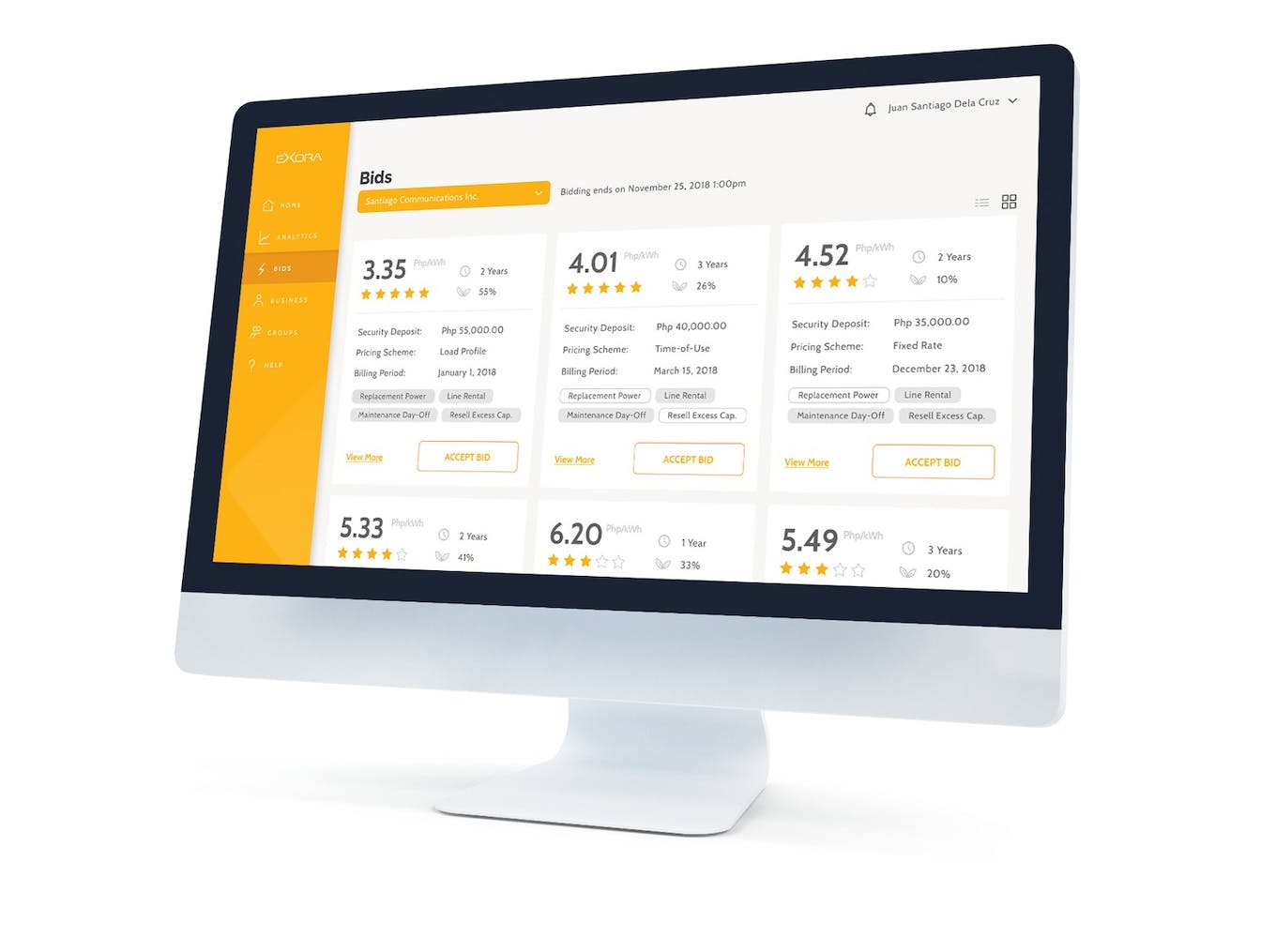 Exora’s bidding page from the point of view of the client. The system uses an algorithm which automatically processes all contracts from prospective energy suppliers and rates them on a scale of one to ten, based on how well the contract meets the company’s requirements. Ultimately, the start-up’s founders aim to make the platform available to ordinary households. Image: Exora

Santos rounded up his friends Matt Tan, Bradley Cua and Enzo Bautista. The quartet, who were all students in the School of Science and Engineering of the Ateneo de Manila University, spent most of their college years studying the industry and conducting simulations of the best way to level the playing field for energy consumers.

In January last year, they launched Exora, an online platform connecting Filipino businesses directly with energy suppliers, which would bid to offer electricity at the best prices to clients. It is the first in Asia to provide real-time energy bidding by energy suppliers to woo a customer.

The 13-month-old start-up enables businesses to put their electricity profiles on its platform and connect with an electricity partner that will offer a price range and contract that meets their expectations.

“The traditional way of doing things is, clients get a contract that’s just handed to them. With the platform, the client nominates his preferences, then the suppliers will try to match it. It’s more consumer-centric,” said Tan, Exora’s chief operating officer.

“We want to remove the habit of just paying the bill. For the longest time, Filipino businessmen never questioned their bill out of fear that their electricity lines might get cut off. We are hoping to change that,” said Tan, who graduated in March last year.

The 24-year-old entrepreneur said Exora makes energy procurement much more efficient by slashing the time needed to understand multiple contracts. The system uses an algorithm which automatically processes all contracts from prospective suppliers and rates them on a scale of one to ten, based on how well the contract meets the company’s requirements.

Previously, companies would have to go through an average of four contracts before they decided which provider to go with, Tan said. It traditionally takes four to six months to finalise an energy contract, but with the online platform, the duration is cut to two-and-a-half weeks, he added.

While the system does not have a feature showing the carbon footprint of electricity suppliers for now, Tan said there are plans to show which ones are the most energy efficient.

As clients learn to buy their own electricity and understand how energy is priced, Tan hopes consumers will inject more flexibility into their production schedules. For example, he noted, they could shift production to night time, when electricity rates drop by 30 per cent.

Through Exora, five local corporations so far have sourced electricity from the industry’s biggest energy suppliers including hydroelectric power generation firm First Gen, Ayala Corporation’s AC Energy and Aboitiz Power Corporation. They are now paying an average of 10 per cent less than before, said Tan.

We want to remove the habit of just paying the bill. For the longest time, Filipino businessmen never question their bill out of fear that their electric lines might get cut off. We are hoping to change that.

Give households the freedom of choice, too

Exora has also tailored its approach to Philippine laws.

Provisions that support retail competition and open access under the country’s Electric Power Industry Reform Act allow certain businesses to source their electricity from any of the 33 retail energy suppliers chosen by the Energy Regulatory Commission (ERC).

Companies with an average electricity consumption of 1,000 kilowatts (kW) a month may choose an energy supplier, and leave their existing private distribution utility or electric cooperative. In the future, more companies, including smaller ones, will be eligible to participate as the consumption threshold is gradually reduced to 750kW, then 500kW per month.

ERC’s proposal to make it compulsory for eligible consumers to switch suppliers has, however, been challenged in the Supreme Court by some industry players including the Manila Electric Co (Meralco).

Meralco, which has long monopolised the local power industry, is questioning why it should be mandatory for companies to migrate from their existing distribution utility.

While the court case is ongoing, companies have the choice to stick to their current supplier.

Exora is neutral about ERC’s proposal, but Tan hopes the Philippine government will eventually enable households to choose their electricity supplier, as the regulations originally intended.

“The company’s end-goal is to be able to extend this opportunity to households by ensuring efficient and demand-driven energy transactions,” Tan said.

“We need to wake up and understand that we need to switch to a more efficient way to access energy. It would make the Philippines more competitive in the Asian region, given that primary beneficiaries of the law are mostly industrial entities. If we have more competitive electricity rates, more multi-nationals would want to do business here.”