Half-time at COP27: Where views diverge on the climate fight

How big a role should corporates play? Should we rely on atomic power? As climate talks in Sharm El-Sheikh enter the final week, Eco-Business looks at the vibrant discussions happening on the sidelines and highlights four unresolved issues.

Following a first week of talks at the COP27 climate summit that left much unsettled, with scant progress towards new climate funding schemes or ways to cut emissions faster, negotiators are now left with just a few days to work through a mammoth list of items. The clock is ticking for them to come up with a plan to keep global warming in check, while making sure countries worst hit by climate risks are equitably assisted.

Observers say it would be tough. Negotiation drafts seen, now handed over to ministers of individual countries, are smothered in square brackets – indicating text still under discussion and viewpoint clashes. For example, the draft for a more ambitious climate mitigation programme has 215 sets of brackets. One on carbon markets has 120.

It is also not only at the formal talks that views differ. As observed, conversations happening at side events – dialogues, panels and demonstrations – are mirroring the difficulties that negotiators are facing. Some are essential questions that might be left unanswered even as the COP proceedings wrap up.

Eco-Business highlights four key questions that are being asked:

1. Is big business getting too involved? 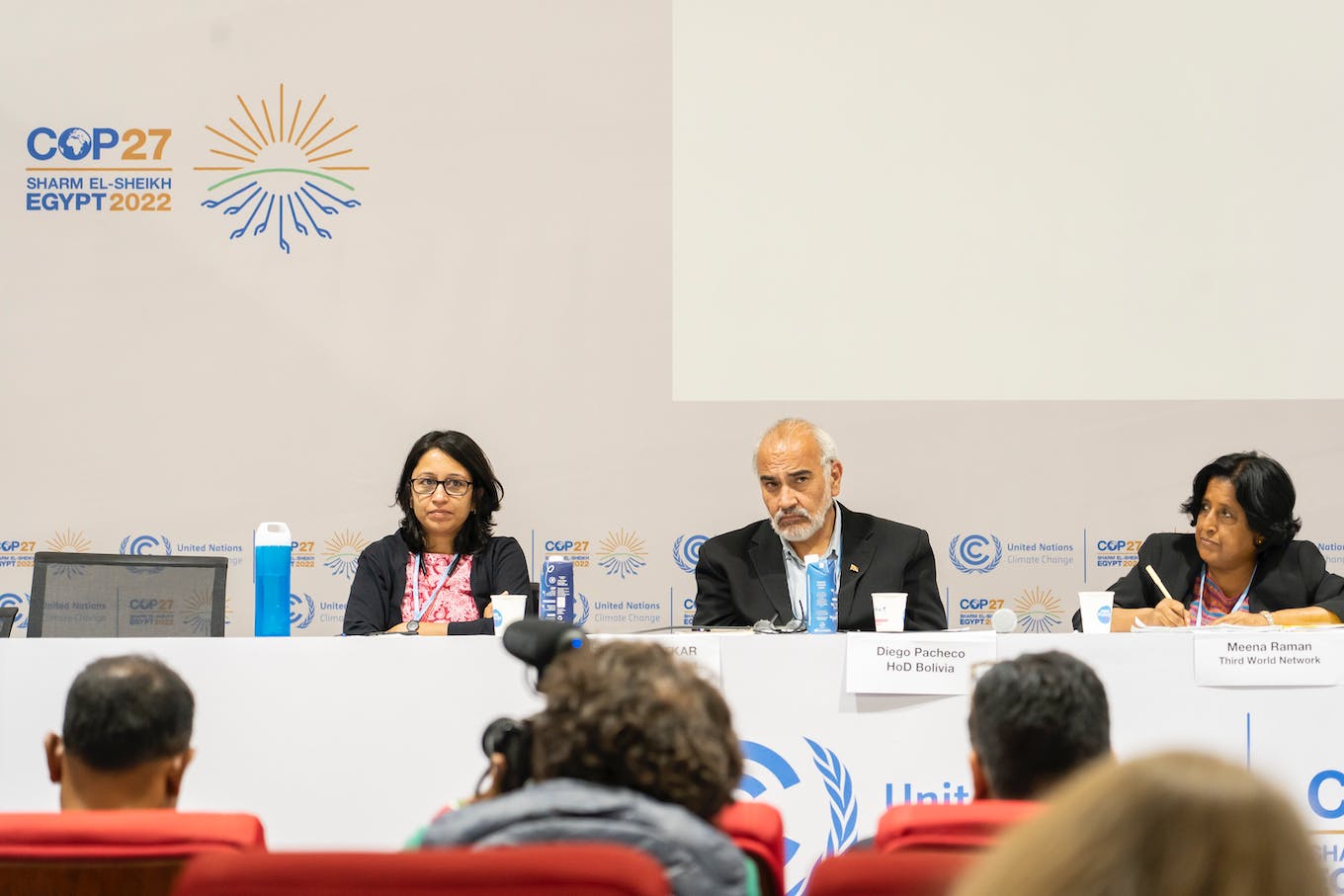 Diego Pacheco (centre), head of the Bolivian delegation at COP27, at a evening briefing session on November 9, 2022, along with Tejal Kanitkar (left), a scientist from India, and Meena Raman (right), head of programmes at Third World Network. Image: Eco-Business/ Liang Lei.

Firms have been keen to show that they are in on green investments, and governments have been helping them along.

On Friday, a group of philanthropies pledged US$500 million of investments over the next three years to speed up the clean energy transition in low and middle-income countries.

Not everyone is appreciative of the increased role businesses are playing in providing climate finance.

‘Common but differentiated responsibility’ is a global principle agreed back in 1992 that the whole world is obliged to act on climate change, but industrialised nations bear greater burden.

Pacheco said that there is “huge pressure” from developed countries to get the private sector more involved, including in negotiations for a new climate mitigation programme.

“In our understanding, that is not really the solution to the crisis,” he said.

Pacheco told Eco-Business that the private sector could play a role, but that should be outside of carbon trading systems, and after being told to take into account the needs and priorities of local communities. Whether these clauses can make it into final COP27 decisions remains to be seen.

2. Can we trust non-binding pledges for climate finance?

Discussions are underway for a new tranche of global climate finance, set to begin in 2025, called the “New Collective Quantified Goal”. It is seen as a successor to the US$100 billion a year by 2020 that developed countries pledged in 2009 but fell short by about a fifth.

The G77+China bloc, representing over 130 developing nations, are calling for a form of baked-in guarantee that the financing pledges will be fulfilled.

That, along with well-defined funding amount and timeframe, are the “critical” and “fundamental” elements of the new funding agreement, according to Nabeel Munir, the Pakistan chairperson of G77. But he also ended the briefing at a conference organised by Malaysian non-profit Third World Network by saying: “Maybe I’m a dreamer, maybe I am just thinking too loud, or thinking too hard.”

Part of the issue could be that there are few repercussions when countries miss the voluntary targets they set – a point raised by Egypt’s lead climate diplomat Wael Aboulmagd during his daily press brief last Friday (November 11).

Civil society would need to remind parties of their voluntary pledges and hold them accountable for it, Aboulmagd said, adding that Egypt as COP hosts will also hold talks with some countries on the issue.

In comparison, if countries fail to meet the Nationally Determined Contributions targets under the Paris Agreement, a compliance committee is in place to nudge them to do better, in a process colloquially known as “name and shame”.

Meanwhile, more voluntary pledges have been made in the past week. The commitments include the United States’ doubling of its contribution to a global climate adaptation fund to US$100 million and a new US$150 million for Africa specifically. Nations like Austria, New Zealand and Germany have also pledged millions of dollars towards loss and damage. Norway has said it will send US$9.5 million to small-scale farmers in developing countries.

3. Has the world ‘gone bananas’ over nuclear? 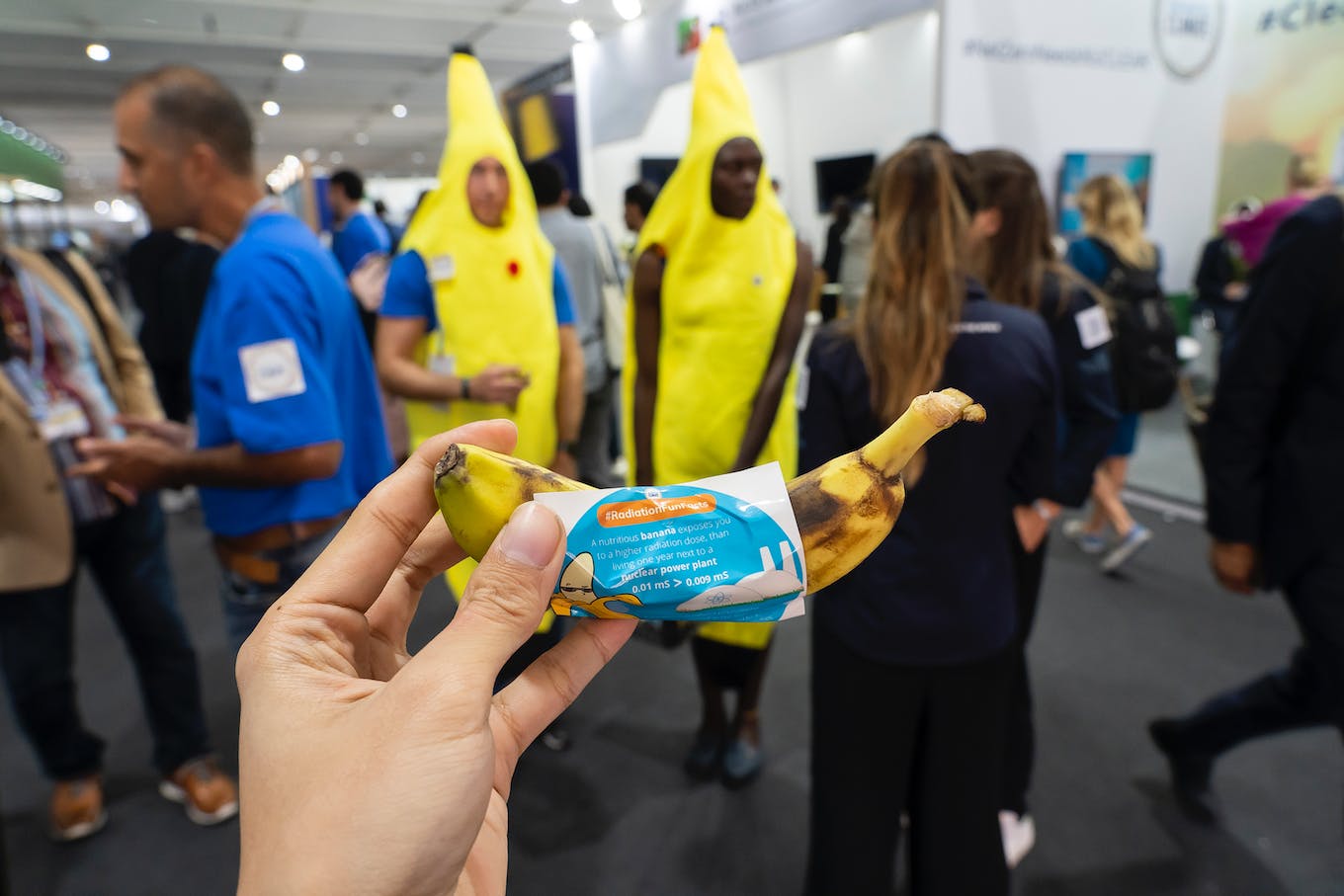 A booth run by the International Atomic Energy Agency hands out bananas with a message that each one contains more radiation than living next to a nuclear power plant for a year. Image: Eco-Business/ Liang Lei.

An event booth run by the International Atomic Energy Agency (IAEA), under the banner “Nuclear for Climate”, attracted its fair share of attention, with activities like handing out bananas claiming they give off more radiation than living for a year next to a nuclear plant.

The fancy marketing got its critics too. Overhead was one participant confronting the IAEA members, asking them if they’d like to talk to “some survivors from Fukushima”. The Fukushima nuclear plant meltdown in 2011, caused by an earthquake and tsunami in Japan, caused hundreds of thousands of people to evacuate. One person is officially recognised to have died due to radiation-induced cancer.

“Does it not cause cancer?” another passer-by quipped. “Are you going to eat the radiation?” an IAEA member replied.

“We should be using renewables like solar and wind, that’s more readily available, you can put those [facilities] together much quicker, why not accelerate those instead of accelerating nuclear?” questioned John Beard, a member of US-based non-profit Centre for Biological Diversity, of the IAEA’s stance.

The IAEA members repeatedly told its critics that those who support renewables should join forces with the nuclear power camp against fossil fuels, instead of going on a three-way fight.

The use of nuclear power as clean energy remains controversial worldwide. The European Union labels nuclear power projects as suitable for receiving green financing, though many countries within the bloc disagree. In Asia, China and South Korea are the biggest proponents for scaling up nuclear power. Some countries are also hoping that nascent technologies, like small and modular reactors, can help make atomic energy more accessible and quicker to build.

Meanwhile, several other participants at COP27 took the bananas handed out at the IAEA booth, some asking for two, saying they had not had lunch.

4. Is Africa’s push for gas hurting its core interests?

The exploitation of Africa’s gas reserves was also a contentious topic. Activists decried the act, saying that it will do communities more harm than good.

The situation in Mozambique was brought up – where social discontent from gas export developments in the north bloomed into an insurgency, one that involved the terrorist group ISIS.

The reality, however, is that almost every continent now has major backers for increased gas production.

Europe has been seeking for more gas from international sources, including Africa, following Russia’s invasion of Ukraine, creating intense competition with existing customers in the Asia Pacific and driving the price of gas up sharply. This in turn has fuelled calls for higher gas production in Asia itself, at a time when the United States is already ramping up its own export capacity to meet European demand. Australia has also pitched itself as a reliable exporter.

Many countries in Africa, including Mozambique, have indicated at COP27 that it is in favour of developing its untapped gas resources to provide a steady flow of electricity to its fast growing population, of which 600 million have never had power.

“We are in favour of reducing greenhouse gas emissions. But we Africans cannot accept that our vital interests are being ignored,” said Macky Sall, the president of Senegal and chair of the Africa Union, as reported by Reuters.

Sall is expected to further push for Africa’s natural gas development at the G20 summit in Bali, Indonesia, which kicked off on Tuesday.

Natural gas produces less carbon emissions than coal and gas when burnt, but is still magnitudes higher in pollution compared to renewables like solar and wind power. Gas fields have also been blamed for huge leaks of methane, a gas more powerful than carbon dioxide in warming the Earth.