Calls for more gas in the energy transition ring loud

The International Energy Agency says all fossil fuels, including gas, must rapidly fall to reach net-zero emissions. Not everyone agrees. Market volatility and a record price surge is forcing Asia to consider expanding its gas pipeline.

Natural gas has been a grey area in the energy transition. As the “cleanest” fossil fuel out there, it is deemed better than oil and coal, but lacks the strong green credentials of solar and wind.

Last year, the International Energy Agency (IEA) said that to reach net-zero greenhouse gas emissions by 2050, there should be no new projects to supply more fossil fuels, including natural gas.

This year, the agency is instead worrying that there isn’t enough gas to go around.

“I see pressures from the increasing LNG imports from Europe, from China, and importantly, our analysis shows that only 20 billion cubic metres of LNG capacity is coming to the market next year,” said Fatih Birol, IEA’s executive director, at the Singapore International Energy Week last week. LNG refers to liquefied natural gas, a common transport form of the fuel.

Birol predicts that LNG prices in Asia Pacific will continue to soar.

With Russia’s invasion of Ukraine resulting in trade embargoes on the aggressor, also the world’s largest supplier of fossil fuels, gas prices have been skyrocketing. At one point, the price of Asian LNG increased to over US$80 per million British Thermal Units, compared to under US$5 in 2020. Bracing for further supply cuts from Russia, Europe has hastily entered the global LNG market, a move that threatens to price out smaller Asia Pacific economies.

To better manage the fuel supply risks, experts are proposing an increase in gas supply in the Asia Pacific. Kazutomo Irie, president of think-tank Asia Pacific Energy Research Centre (APERC), said that doing so could tame the high gas prices that have led some countries in the region to switch back from gas to dirtier oil and coal.

He sees the bet for more gas in the region as a crucial solution to the current problem.

“As an incumbent global supplier of natural gas and LNG, this crisis in decarbonisation will provide some APEC gas suppliers an opportunity to [grow] a lot larger. Doing so will require convincing investors to increase funding for gas production,” he said, referring to the Asia Pacific Economic Cooperation forum, which includes gas producers like Australia, Brunei and the United States.

While the United States has been steadily increasing its exports of LNG to meet European demand, Southeast Asian exporters have seen their existing gas fields steadily dry up, according to American analytics firm S&P Global.

In a energy outlook report released in September, APERC said that even in an ambitious “carbon neutrality” scenario with deep emissions cuts and plummeting coal use, Asia Pacific will increase its use of natural gas in power generation by about a third by 2050. About half the capacity then will be installed with carbon capture technologies.

The use of gas in industrial applications, meanwhile, is expected to fall 20 per cent, as hydrogen fuel and electrification take over some applications. 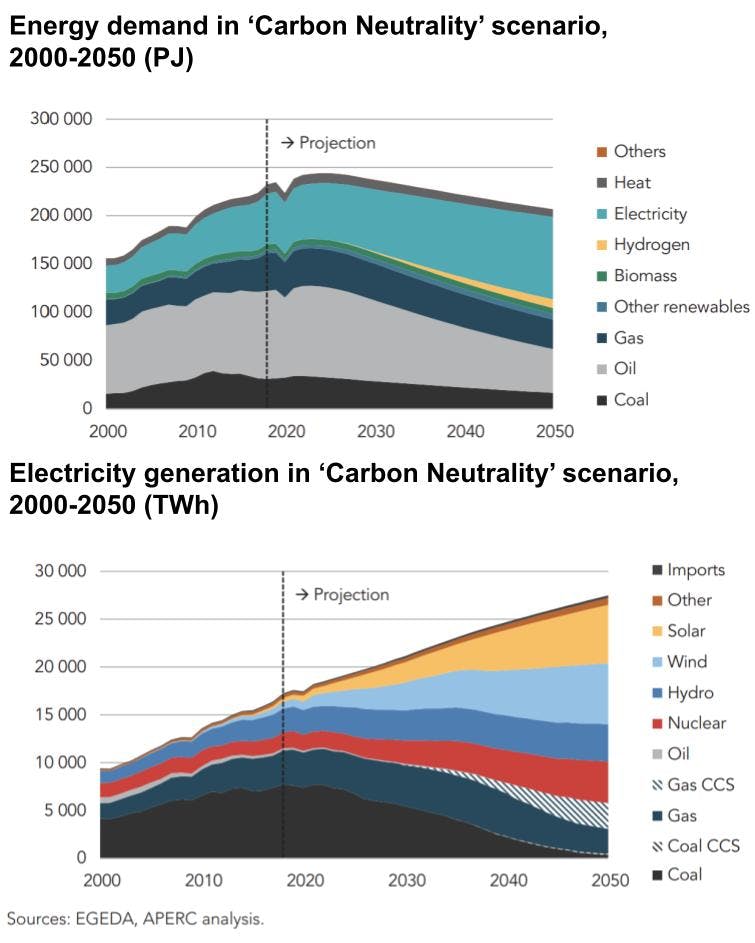 Main sources of fuel in Asia Pacific for overall energy needs (top) and electricity generation (bottom) in a scenario where deep emissions cuts are pledged. Image: APERC. [click to enlarge]

An energy supply projection this year by the Association of Southeast Asian Nations (ASEAN) also found that in no scenario will the amount of natural gas fall between now and 2050, as fuel demand in the region is set to increase by up to four times compared to 2020.

“We are going to need about a trillion dollars a year in the existing old energy system. That is unfashionable, it is unpalatable, it just happens to be the unfortunate truth,” said Martin Houston, vice-president of Texas-based natural gas firm Tellurian.

However, gas finance has been hard to come by in part because investors are becoming increasingly hesitant to put money in fossil fuels, regardless of type. Singapore bank UOB, which bankrolls many Southeast Asian projects, has said it will stop financing oil and gas supply projects this week. The Asian Development Bank made a similar pledge last year.

Irie said gas producers will need to tackle the issue of methane emissions to maintain their social licence. Methane, on a decadal time scale, is several times more powerful than carbon dioxide in heating the world; several huge plumes have been detected in recent years over gas fields.

Meanwhile, the growth of renewables in Asia remains slow, with only about 5 per cent of its current energy mix comprising wind, solar and hydropower, according to IEA statistics. Higher investment risks, outdated grid infrastructure and pro-fossil fuel policies are common refrains.

IEA’s Birol said the issue can be solved with “simple” policy interventions, such as for national governments to address investment uncertainties, and for multilateral banks to reduce the cost of capital and further derisk projects – commonly done through blended finance structures today.

There have also been warnings that the task isn’t easy. A study on Southeast Asia by American consultancy Bain & Company this year found that governments may be underestimating the funding needed to properly integrate intermittent renewable energy into electricity grids. It warned that the cost of renewables may rise with greater adoption, citing studies from Europe and India.

Countries like Singapore, which has struggled to deploy renewables at scale due to its small land size, cloudy skies and calm winds, are sticking to their guns on natural gas. The city-state is set to secure a new five-year piped gas contract with Indonesia, its long-term provider, and recently signed deals with Japan on developing LNG markets.

The Philippines will open its first LNG import terminals next year; Thailand signed a 20-year LNG contract back in July. Long-term gas contracts, which are often pegged to oil prices, have been more stable than the spot market, though the price of the longer deals have also risen 50 per cent on-year, according to Singapore government data.

However, investments in natural gas and renewables could be a zero-sum game.

“The risk is huge that investments in natural gas infrastructure crowd out investments in renewables. It is important to remember that the supply of money is not endless when it comes to the Asian energy sector,” said Sam Reynolds, an analyst at US-based Institute for Energy Economics and Financial Analysis (IEEFA).

Reynolds added that decisions on gas deals and infrastructure made today would unlikely come in time to mitigate the near-term energy crunch. New LNG infrastructure could take a decade to develop, and the IEA said that Europe is also pulling away regasification units for its own LNG buildup.

Any long-term gas deals signed today will probably only involve deliveries in 2026 and beyond, Reynolds estimated, given the profitability of operating in the spot market today.

The IEA, on its part, said that the use of natural gas in Asia Pacific needs to fall about 80 per cent by 2050 for the world to reach net-zero emissions then, in a new report released last week.

It also noted that momentum behind gas in South and Southeast Asia has slowed as a result of Russia’s war and the resultant gas spike, which has put “a dent in the credentials of gas as a transition fuel”.

But the wording around new gas projects has softened from 2021, when it called for no new projects. It now reads: “declines in demand can be met without approving new long lead time upstream conventional oil and gas projects”.