Supporters say carbon capture in coal energy plants helps countries reliant on coal to go green. But critics say the unproven technology is a distraction from the much-needed energy transition.

Coal has been roundly vilified at COP26, the latest global climate change conference in Glasgow, Scotland. All countries agreed to start moving away from it; over forty pledged to phase it out of their energy mix in the next twenty years or so.

While coal forms the backbone of the world’s energy supply, it’s the cause of half the world’s carbon dioxide emissions, and has been deemed incompatible with keeping global warming to 1.5 degrees Celsius.

But the COP26 climate pact may not sound the death knell of coal entirely, not just because the wording of its phase-out was changed to “phased down”. The declaration wants, specifically, “unabated coal” to be phased down.

It is not a new distinction coming out of the Glasgow conference. Abated coal means using some form of carbon capture, utilisation and storage (CCUS) technology in power generation, according to the International Energy Agency (IEA) and Group of Seven (G7) forum.

CCUS has been touted as a practical way for countries with large, young fleets of coal plants to transition into low-carbon power generation. But there hasn’t been steady political interest in the technology in the past, and its commercial viability remains in question.

Critics believe that coal should be dropped entirely given the severity of the climate crisis. Some think abated coal delays the transition to green energy. The cost-sensible way of deploying CCUS - by coupling it with enhanced oil recovery - can also lead to more oil being extracted.

Carbon capture is a century-old technology. In the 1920s, it was used to separate carbon dioxide from valuable methane gas.

Efforts scaled up in the 1970s, when CO₂ distilled from a Texas gas processing facility was injected into an oil field to push more crude to the surface. The process made money sense. CO₂ was a contaminant to be removed from the gas facility anyway, and the cost was offset by higher yield at the oil wells - by up to 60 per cent in some cases.

Carbon capture was later brought to power generation, as the harmful effects of greenhouse gas emissions were recognised. In 2014, fumes from an ageing coal turbine in Canada were piped into newly-built gas facilities next door. Thus began the “Boundary Dam Integrated Carbon Capture and Storage Demonstration Project” - the first large-scale attempt at catching carbon emissions from a power station. 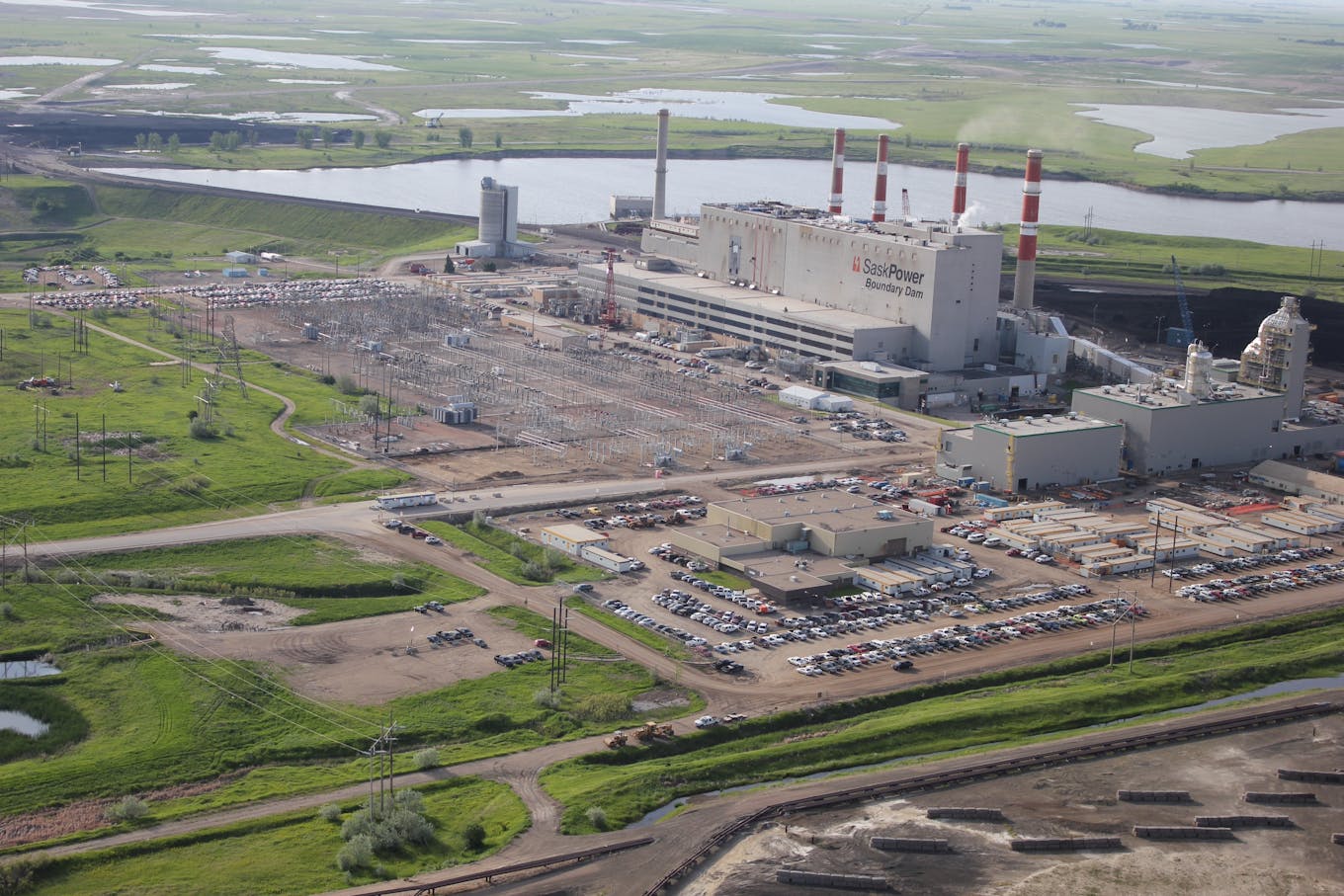 The Boundary Dam Power Station. The smaller buildings on the right house the carbon capture facilities. Image: SaskPower via Flickr. 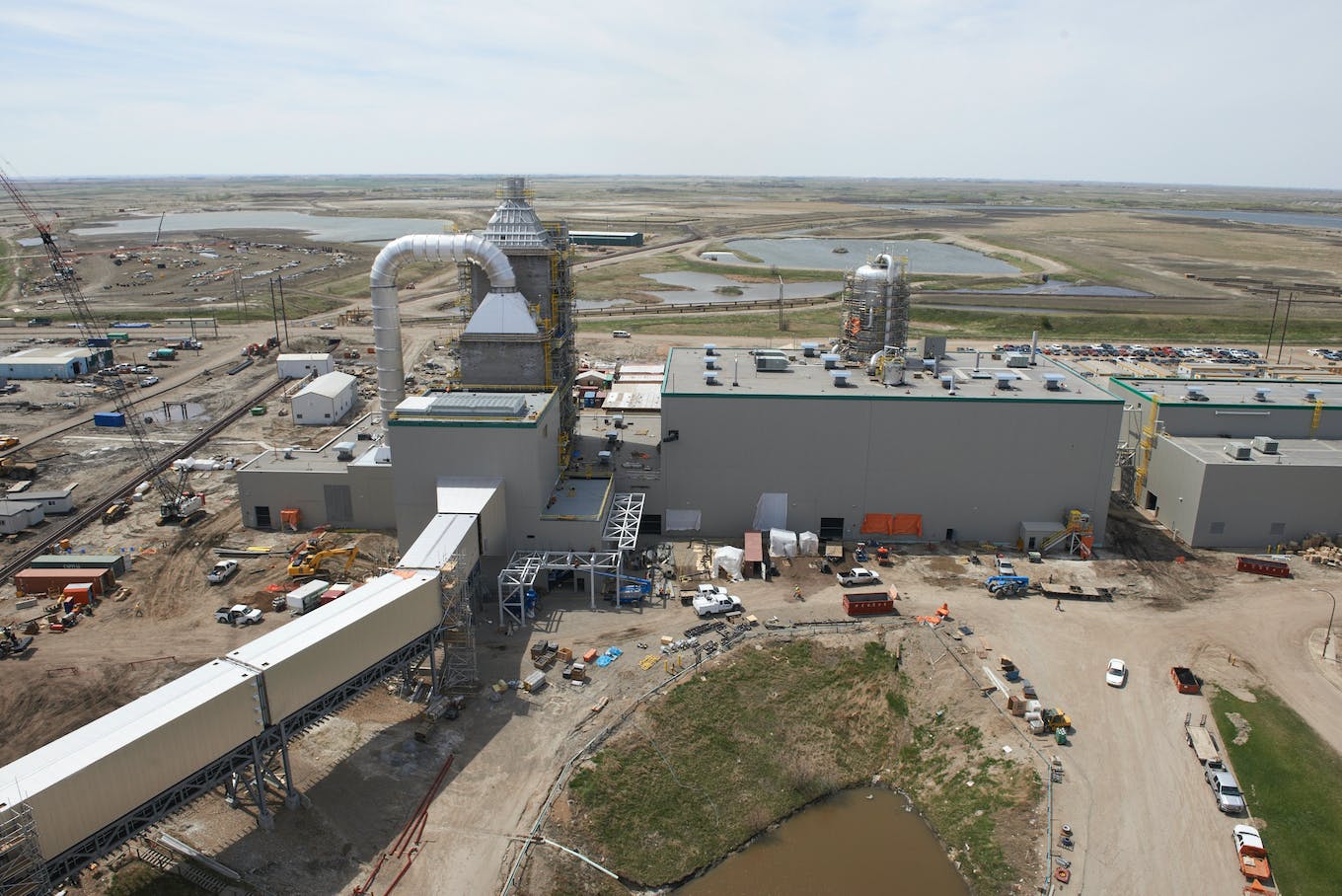 The facility trapped as much as 90 per cent of the CO₂ exhaust, a feat the United Nations said laid the groundwork for “any coal-fired power station in the world” to do likewise.

Except, it hasn’t. Boundary Dam is still the only power station with a CCUS system in the world, despite the technology becoming more advanced over the years. One more opened in a United States coal plant in 2017, but was shut down in 2020 amid bad financial and performance metrics.

“It’s the cost that is the key,” said Dr Philip Andrews-Speed, a senior principal fellow at the National University of Singapore’s Energy Studies Institute. “I mean this technology has been promised for 20 years.”

Carbon capture in power generation is one of the most expensive applications of the technology, costing up to US$100 per tonne of CO₂. Outside of power generation, there’s 26 other carbon capture and storage facilities worldwide. Most are in natural gas processing and chemical production plants, where less CO₂ is emitted and the cost of capturing the gas is between three to seven times cheaper.

But interest in applying CCUS to coal power generation has been rising, even before the strong declarations against coal in COP26. Six projects are being developed, with one in China underway. They are expected to capture over 20Mt of CO₂ annually, or about five per cent of what the energy sector needs to abate by 2030, to reach net-zero by mid-century.

It amounts to a second spike in interest in recent years, following the first wave after the financial crisis of 2008-2009. Then, the United States had sought to scale up the technology, but projects faltered due to cost, engineering hurdles and to some, a lack of clear climate policy.

“It’s only as the climate agenda really has been pushing in, that you see many more projects come on stream,” Andrews-Speed explained, adding his hope is that the momentum stays and costs drop.

Who will drive abated coal?

The United States, the world’s third largest coal user, looks set to be the biggest player yet again. Of the six new CCUS projects at coal power plants, four are in the US, with the other two in Australia and China. Last December, the US Congress authorised a five-year, US$2.6 billion package for commercial demonstration projects that will include coal-fired power plants.

The IEA earmarks Asia as an area to develop abated coal. The region uses over 70 per cent of the world’s coal, and is developing nearly 200 coal-fired power plants. Existing facilities are young, with the average age at 13 years, or just over a quarter of a typical coal plant’s lifespan. IEA says shutting them down, instead of retrofitting them with CCUS, may result in financial losses and unemployment.

A group of nine ASEAN countries, along with Australia, India, Japan and the US, recently drew up potential CO₂ storage sites and sources in southeast Asia. Coal power plants were included in the maps.

“CCUS technology has good feasibility to address the increasing of the undoubtedly huge amount of CO₂ emission from coal power plants, while the ASEAN region, fortunately, has sufficient geological storage,” said Beni Suryadi, manager of the Power, Fossil Fuel, Alternative Energy and Storage (PFS) department at the ASEAN Centre for Energy. ASEAN views carbon capture as part of its efforts to develop “clean coal technologies”, which include using high quality coal.

But Suryadi also sees many roadblocks to adopting CCUS. For example, regulations around project site selection, permits, liability and financial securities are largely absent. The projects will require huge capital inputs but generate slim revenues, so governments and the private sector need to be convinced to provide financial support. There’s also technological hoops to jump through.

The ASEAN Centre for Energy has been conducting capacity-building programmes on carbon capture in the region. Suryadi expects Indonesia and Malaysia to have coal power plants fitted with such technology by around 2035.

Canada, which currently houses the only coal power CCUS project, won’t be part of the movement. The Powering Past Coal Alliance, a group of 48 countries working to phase out coal energy, told Eco-Business that it’s co-chairs, Canada and the United Kingdom, do not expect further deployment, nor actively promote carbon capture on coal power generation.

But the biggest puzzle is China, the largest user of coal in the world. “China has the money and the scientists do this,” said Andrews-Speed. “What surprises me, and I’ve got no explanation for it, is how slow China has been with carbon capture development.”

What surprises me, and I’ve got no explanation for it, is how slow China has been with carbon capture development.

Exorbitant costs may be a factor. In an energy forum earlier this year, Sang Shuxun, dean of the Low Carbon Energy Institute at the China University of Mining and Technology, said that low CO₂ density in coal plant exhausts meant that abatement cost was high. He added China did not have the pipeline network needed for long-distance CO₂ transmission.

Doubts linger on whether carbon capture can act as a stopper on the emissions from coal power generation.

“Generally speaking CCUS projects have not been able to capture the levels of CO₂ that they have planned,” said Bruce Robertson, an analyst at the Institute for Energy Economics and Financial Analysis (IEEFA).

Earlier this year, IEEFA found that the CCUS project at Canada’s Boundary Dam coal plant had reached its expected CO₂ capture target over two years late, and its CO₂ capture rate had been consistently below the 70 per cent mark.

At Petra Nova, the US CCUS project at a coal plant that ran between 2017 and 2020, the amount of CO₂ captured was 17 per cent below expectations. The number of days the facility was offline added up to over a year, largely due to technical and power supply issues.

Robertson said a mandate on high CO₂ capture, at over 90 per cent, will be necessary to keep to Paris agreement-aligned outcomes. Currently, there isn’t a minimum performance standard for what counts as “abated” coal power generation. Petra Nova was designed from the outset to capture 33 per cent of carbon emissions.

Andrews-Speed doesn’t think a performance standard should be a main concern now. “If we could get hundreds of gigawatts equivalent across the world in coal fired power, carbon capture and storage, even if it’s only operating at 80 per cent, we would be doing pretty well,” he said. The priority now, he said, is driving the cost of the technology down or raising carbon prices.

There’s also contention over how the captured CO₂ is stored, or used. Both the Boundary Dam and Petra Nova facilities send their captured emissions to help with extraction at oil fields, in an attempt to compensate for the cost of carbon capture. The use of such oil downstream would continue to produce CO₂ emissions.

Of the six upcoming abated coal projects, two have opted to use their captured emissions for oil recovery. Three others are still being studied, while one has committed to keep the CO₂ in deep geological storage - where there’s questions about the risk of leakage back to the surface.

“We should not be placing any reliance on CCUS,” said Robertson. “Despite copious government subsidies and decades of development it has failed to deliver as a technology in terms of effectiveness or on economic grounds. CCUS has been subsidised, scaled up and failed to work effectively.”

Others call for a more measured approach, especially for parts of the world, particularly Asia, that are going to struggle, and resist, a fast to transition away from coal power generation.

“Coal has been a driver of industrialisation, economic growth, and energy resiliency for decades and will remain as a major fuel input in fulfilling the growing energy demand in ASEAN,” said Suryadi, adding this is why it is urgent to find new tools like CCUS technology to plot a more sustainable path ahead.

“I think the key is if you’ve got coal, lots of it, you need to find a way to keep it in the mix. I mean, energy security is about diversity,” said Andrews-Speed. He expects coal to still be used 50 years down the road, which justifies the use of abatement technology.

“But it’s best to do it along with rapidly reducing the use of coal,” he adds.