As power bills surge amid Covid-19, will prosumers be the Philippines’ next big energy trend?

Filipino households have seen a spike in electricity usage since the coronavirus confined residents to their homes. Could this spark a movement where the average citizen becomes both a power producer and consumer?

Unlike many Filipino consumers who have been forking out more for their electricity bills in recent months, entrepreneur and Manila resident Mike de Guzman has had to pay nothing.

A 20 kilowatt-peak (kWp) solar installation in his home generates more electricity than his household requires and allows him to sell excess power to the national grid.

“Even if we had to use the air conditioning more often during lockdown since we were working from home, we have had a zero or even negative residential electric bill. This is because we consistently produce more energy than we consume and amass net metering credits,” de Guzman told Eco-Business.

His experience stands in stark contrast to the shock of many Filipinos when they received their power bills in May, three months into the country’s Covid-19 lockdown—consumers had to pay up to four times more than the previous month.

The Manila Electric Company or Meralco, the country’s biggest power distribution utility, came under fire from consumer rights groups. Explaining the increases, it said that bills for March and April were lower because they were merely estimates from the cooler months of December to February, as the lockdown prevented manual meter-reading.

During the Philippines’ quarantine period, customers were also more likely to use air-conditioners at home, resulting in higher electricity charges, it added.

Some industry players believe the time is ripe for the rise of the prosumer in the Philippines—a consumer who is also a small-scale producer.

There is an acceleration towards prosumer programmes that will enable consumers to not just choose their suppliers for cost and environmental reasons but, if they can, generate power for their own requirements and sell the excess.

The trend is set to gain traction in post-lockdown Philippines as many individuals continue to work from home, commercial establishments adjust their operating hours, and home-schooling becomes the norm, said Monalisa Dimalanta, chairperson of the Philippine National Renewable Energy Board (NREB).

“There is an acceleration towards prosumer programmes that will enable consumers to not just choose their suppliers for cost and environmental reasons but, if they can, generate power for their own requirements and sell the excess,” Dimalanta said.

The NREB develops the policy framework to help the country achieve the goals set under the Renewable Energy Act of 2008, which has a provision that supports the transformation of consumers and communities from “passive” users to “active” players, she said.

Called the net metering system, it allows the distribution utility to pay owners of renewable energy sources like solar panels for excess energy that gets fed back into the grid. The Philippines, along with Malaysia, Indonesia, and Singapore, are among Southeast Asian countries that have such a policy.

As of December 2019, there are 3,132 registered net metering customers all over the country, according to Dimalanta. The number is set to increase this year as more customers have expressed interest to install solar panels in their homes with capacities much larger than before, said de Guzman, who owns a renewable energy company.

Before the pandemic, he said his customers were only opting for installations sufficient to power basic appliances, but now, they prefer systems able to support a multi-generational household on stay-at-home mode.

“Kids have their own daytime loads, parents are on a separate home office and retirees also use their own air conditioners. We are seeing consistent daytime loads of 4 to 8 kW during daytime, whereas last year it would have been half or a-third of that,” he said. 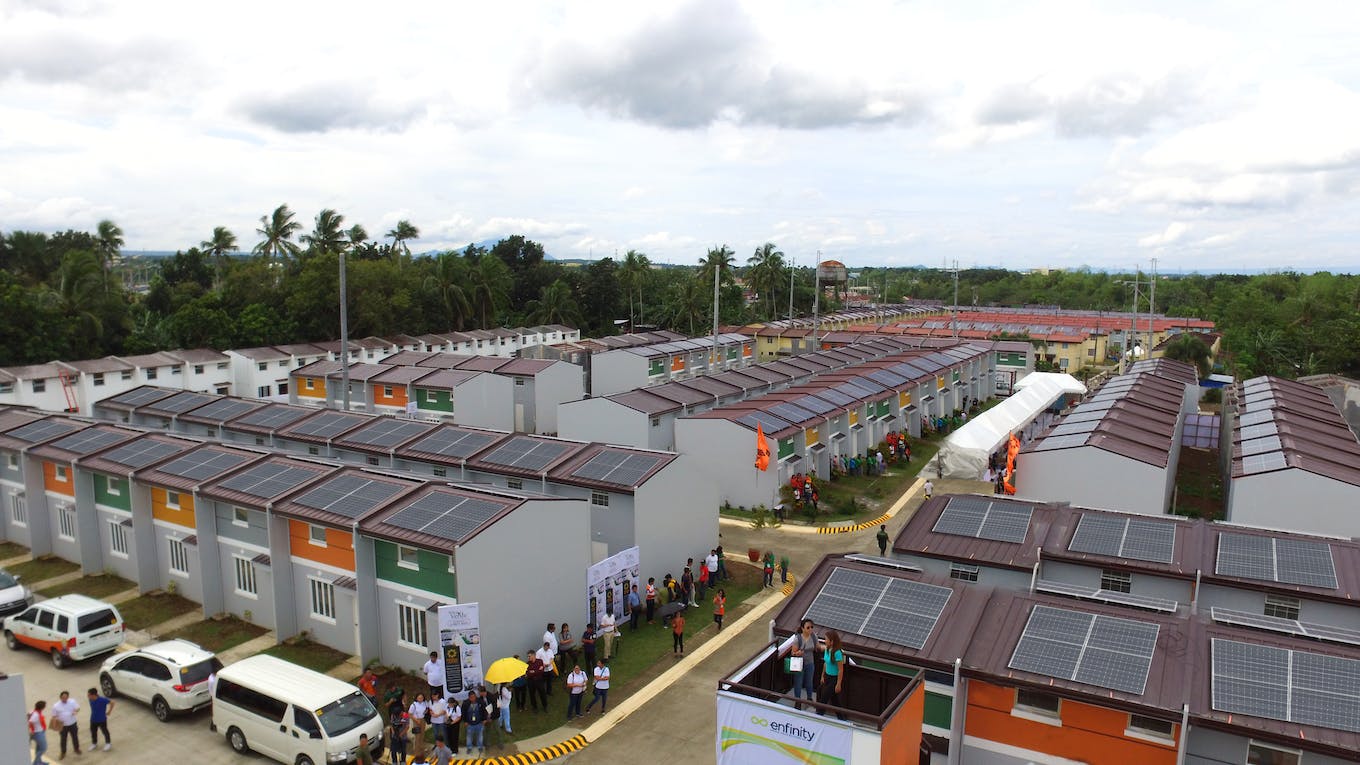 “We really lobbied energy regulators and other government agencies to provide attractive incentives and other support to low-income Filipinos to make it possible for them to own a solar solution,” said Samson.

Approved last year, the  amendments include incentives like lower installation costs, the removal of extra fees for connecting the solar system to the power distribution system, and shortening the time taken to process applications.

Imperial Homes Corporation has set up a 1.2kWp solar package for each of the 1,000 low-cost homes it has constructed in Sto. Tomas, Batangas, about 100 kilometres from Manila.

One of their residents only needed to pay US$0.30 during the Philippines’ recent two-month lockdown, and another was able to sell excess energy back to the grid, Samson told Eco-Business.

“Aside from reducing the overall electricity consumption from the distribution utilities like Meralco, net metering allows low-income customers who consume 100kWh or less electricity to avail of a discount of up to 100 per cent, an amount which is subsidised by all other customers,” he said.

The power of choice for the ordinary customer

Apart from an increase in prosumers, Dimalanta also predicted that more consumers will exercise the right to choose their own energy supplier, and this would likely mean a bigger market share for renewable energy players.

The Philippines’ electricity cost, at US$0.20 per kilowatt-hour, is the second-highest in Asia. A shift to renewable energy could slash electricity rates by 30 per cent, according to a report in 2019 by the United States-based think tank, Institute for Energy Economics and Financial Analysis.

“The new normal will see a rise in residential consumers who will be more conscious about their electricity consumption and seek greater ability (to choose renewable energy sources),” said Dimalanta.

The NREB, along with the department of energy, is set to launch a week-long campaign on 21 July informing consumers how to source electricity directly from renewable energy companies.

The Green Energy Option Programme (GEOP) is a provision that has been part of the country’s renewable energy law for over 10 years, but rules were only issued by the government’s energy department in 2018. The programme has not gained traction, and the campaign aims to raise awareness and assess residents’ sentiments via a survey.

Dimalanta added that the NREB will be approaching special economic zones and real estate firms undertaking commercial and residential land development, to see how the GEOP could be adopted by these end-users.

GEOP rules state that households or other end-users may contract directly with renewable energy suppliers as long as they had a monthly average peak demand of 100kW in the previous 12 months.

Eligible renewable energy suppliers must hold a certificate of commerciality and be registered with the Securities and Exchange Commission.

Electricity end-users who want to participate in the programme have to inform their service provider which, together with the renewable supplier, are to inform them of the technical, commercial and legal arrangements.