After seeing water that looked like “green paint”, Dr James Barnard resolved to devote his life to helping protect water resources and the communities that depend on them. For developing Biological Nutrient Removal technology, he became the fourth winner of the Lee Kuan Yew Water Prize in 2011. In an interview with Eco-Business, he shares how the work that he once viewed with ‘disgust’ eventually led to him finding his life’s purpose.

One Sunday in 1971, South African engineer Dr James Barnard heard over the news that one of the local reservoirs in the country was overflowing and decided to visit it.

“I saw what looked like green paint, dirty green pea soup spilling over the crest of the dam and plunging 35 metres onto the rocks below,” Dr Barnard tells Eco-Business. “Between 40 to 80 per cent of the flow to this reservoir were from treated used water.”

This was the Roodeplaat Dam Reservoir, which has a catchment area of 684 square kilometres and served the rapidly growing municipality of Tshwane, home to just over two million people.

This “green paint” was algal bloom – the overgrowth of algae in a water system – that was caused by an overabundance of nutrients such as phosphorus and nitrogen in the water. Naturally present in water, these nutrients are essential for sustaining plants, which in turn provide oxygen and support other marine lifeforms. They are therefore used in artificial, farm-scale fertilisers.

However, too much of these substances – from the runoff of fertilisers – can cause serious problems not only to water bodies but also humans.

The algal bloom that Barnard saw is an example of uncontained run-off. Algal bloom leads to undesired consequences – lowering the dissolved oxygen in water, leading to murky water, dead fish, and the depletion of flora and fauna. Excessive amounts of nutrients can also stimulate the growth of microbes such as pfisteria, which can potentially make humans and fish sick. 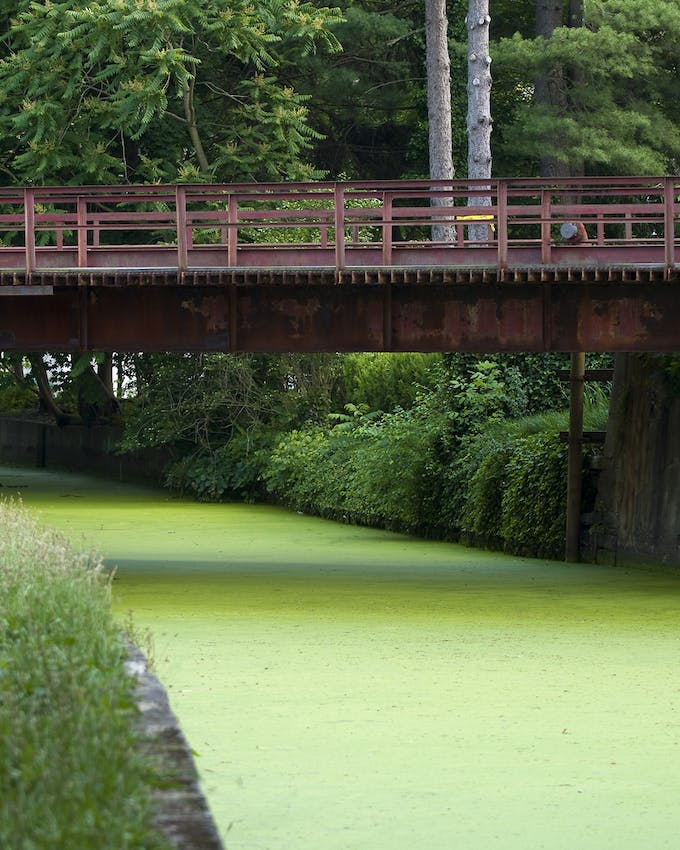 A polluted river in Pennsylvania, US, covered by algal bloom. Image: Shutterstock

Besides the increase in algae and turbidity – meaning, the cloudiness of the water caused by particles - the presence of excess nutrients also increased the need to add chlorine to drinking water, which, in turn, leads to higher levels of disinfection by-products (DBPs).

These DBPs such as chloroform and bromoform have been linked to various types of cancer, kidney and liver damage, immune system dysfunction and even birth defects.

Disturbed by those images, Dr Barnard resolved to do something about it and embarked on research that took more than two years to help battle the algal blooms.

At that time, he was a senior chief research officer at the National Institute for Water Research in Pretoria, South Africa. Before that, he had done post-graduate work at the University of Texas and Vanderbilt University in the United States; it was there that he first learnt about some studies being conducted in nitrogen and phosphorous removal separately.

In his research, Dr Barnard found a way to address the issue of algal bloom, inventing the Biological Nutrient Removal (BNR) technology, which removes nitrogen during used water treatment using naturally occurring microorganisms. This process did not involve the use of chemicals, which was the standard practice of the day, and allowed the treated used water to be safely returned to rivers and lakes.

Dr Barnard also later discovered how he could produce simultaneous biological nitrogen and phosphorous removal in the same system. This was the breakthrough he was seeking. The BNR technology thus proved its merit as a more cost-efficient and a more environmentally-friendly way of protecting and maintaining the water quality of lakes and rivers while promoting water recycling.

Dr Barnard’s BNR technology eventually became the basis for all biological and nutrient removal process configurations in use at treatment plants today.

And for this, the industry has dubbed him the “Father of ‘Biological Nutrient Removal’ (BNR).

Working on BNR was not something the young Dr Barnard saw in his future. He had always wanted to work with buildings; as a young boy growing up on a small farm in South Africa, he was enthralled by machines and curious about how things around him worked.

“In the late 40s, our farm was expropriated to build the new Cape Town airport,” he says. “The large machines they used to level the land fascinated me.”

He enrolled at Stellenbosch University where he specialised in civil engineering, and upon graduation, worked on buildings and infrastructure.

Two years later, to his horror, he was assigned to the sewerage department at a new job with a municipal utility near Johannesburg, because, as his superiors put it, he was an “all-rounder”.

This serendipitous move was to spark a life-time dedication to solving water problems which eventually led him to widespread fame within the global scientific community.

It was around this time that he pursued a course in used-water treatment at Johannesburg Technical College, and became a member of the British Institute for Water Purifications.

Two years after that, he moved to the city of Bellville, near Cape Town, South Africa where he worked on water treatment and water reclamation for industrial use. At that time, the city needed to treat very strong corn-processing waste – the country was Africa’s largest grower of the grain – and was advised to feed the liquid waste into the digester compartment, that will break the waste down to different components to be discarded or reused.

“This essentially turned into the first upflow anaerobic sludge blanket (UASB) plant in the world,” Dr Barnard says. And despite his initial reservations, he recalls: “I found the work fascinating.”

The advantage of using this method to treat waste water is that organic pollutants are converted into a biogas which contains methane and carbon dioxide, which in turn can be used as fuel.

Dr Barnard became engrossed in water treatment, decided to take this work further by studying microbiology, and earned a PhD in environmental engineering at Vanderbilt University in the United States.

“The Dead Sea is alive”

In the late 60s and early 70s, eutrophication was just becoming “a hot topic” in locations such as the Great Lakes and Chesapeake Bay in North America, and in the reservoirs around Johannesburg, the capital of Dr Barnard’s home country. He had spent a few years in the United States and had returned to South Africa in 1971.

“Due to algae blooms in Lake Erie (bounded by Ontario, Canada; Ohio, Pennsylvania and New York), I saw a button for sale saying, ‘The Dead Sea is alive and living in Lake Erie.’

Eutrophication is caused by organic compounds – especially nitrogen and phosphorus – in discharge from wastewater treatment plants.

Seared into his memory were images of animals dying after drinking the water contaminated by too much nitrogen and phosphorus.

There were soon serious discussions about the need for water re-use and the need for removal of nitrogen and phosphorus from used water, he says.

Dr Barnard’s BNR technology is able to remove the substances in a cheaper and more environmentally-friendly way than traditional chemical treatments used in water reclamation plants all over the world. 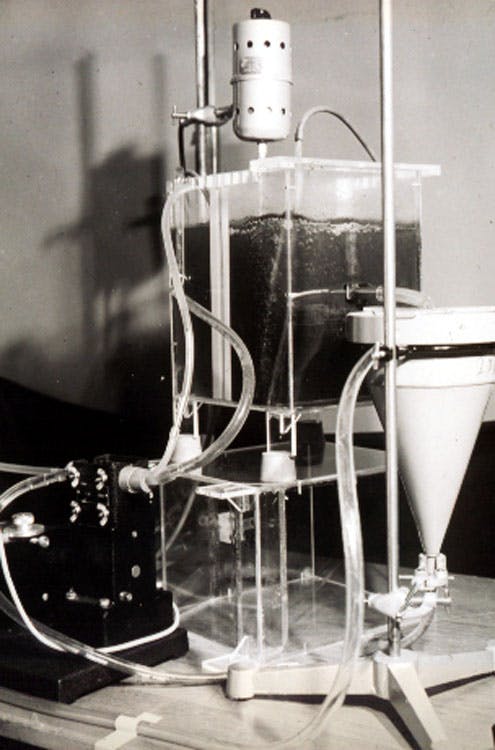 Dr Barnard’s BNR technology, coined Bardenpho (BARnard DENitrification and PHOsphorus removal), can reduce the operating costs of used water treatment by as much as US$400,000 per million gallons per day over 20 years.It helps to protect and maintain the water quality of lakes and rivers. Because it is cheaper, more municipal utilities around the world can afford to recycle water.

Today, Dr Barnard and his steady research and development work on BNR has helped to advance the reclamation of used water as a precious resource that can be recycled.

The technology of biological processes to remove nitrogen and phosphorus has continued to evolve since the early days of Dr Barnard’s invention in South Africa. Scientists are able to adapt the BNR process to different climates, environmental limitations and water infrastructure around the world.

Dr Barnard himself has been involved in more than 100 BNR plants around the world, helping protect the world’s water reserves and the communities that depend on it.

A life devoted to science and people

Having turned 80 years old in June this year, Dr Barnard shows no sign of slowing down. Having worked for engineering firm Black & Veatch since 1998, he is still doing research on water treatment and waste recovery from his base in Kansas City, Missouri in the U.S.

Dr Barnard has a daughter and two grandsons, both of whom are studying for postgraduate degrees in sciences. Having grown up in the closely-knit family, they followed in the footsteps of their grandfather and were inspired to pursue a career devoted to science. 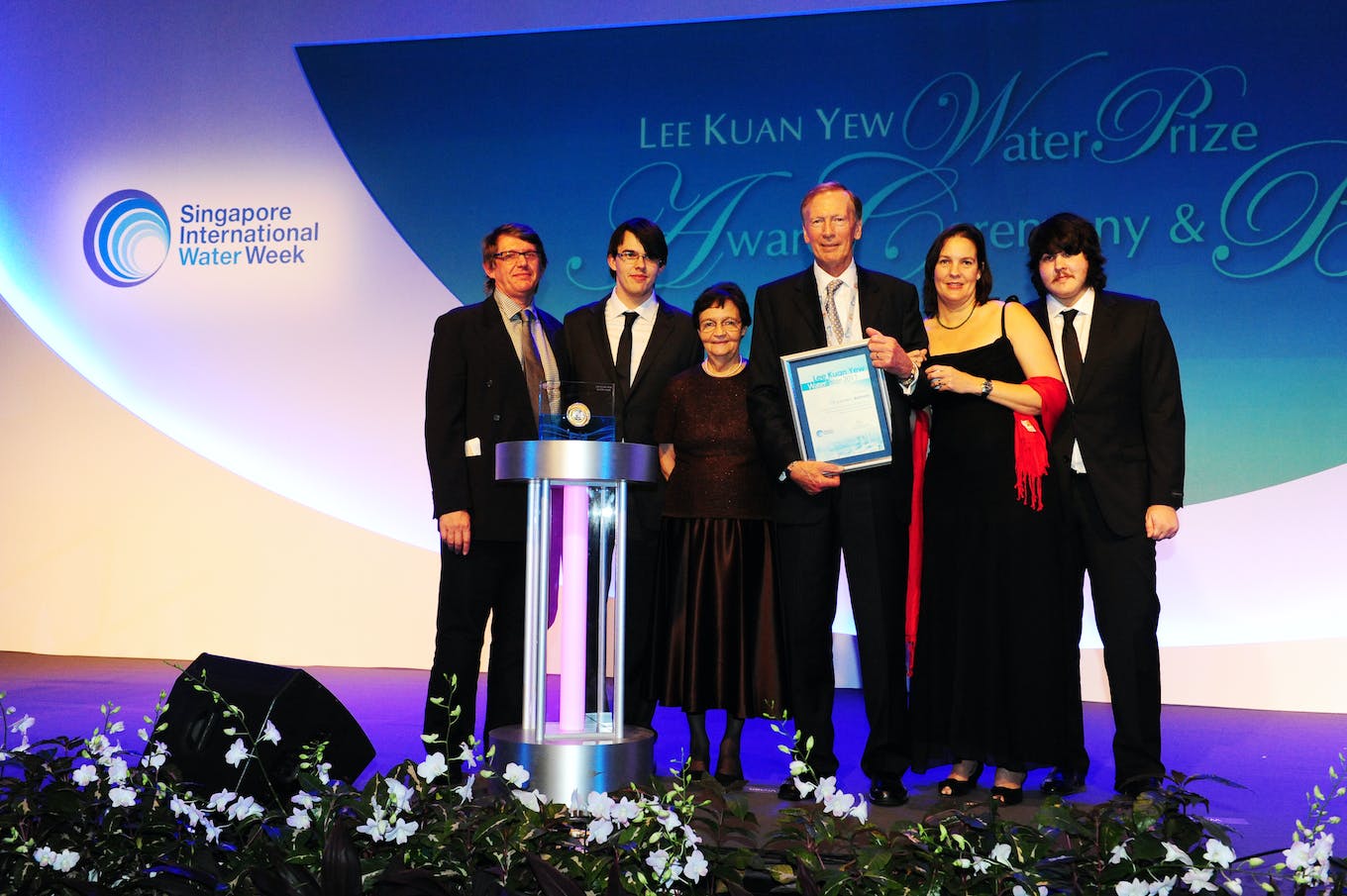 Over the decades, Dr Barnard has won many prizes for his revolutionary work.

In 2011, he was the fourth recipient of the Lee Kuan Yew Water Prize, which was named after the first prime minister of Singapore and who put the country on the path to water sustainability 50 years ago. Established in 2008, the Prize recognises outstanding contributions to solving global water problems by either applying technologies or implementing policies and programmes which benefit humanity.

Its winners are selected by a high-level panel of global experts based on their success in applying ground-breaking technologies that have led to significant benefits for humanity. Dr Barnard stood out from a record of 72 nominations from 29 countries for the Prize that year - one of the highlights of the Singapore International Water Week.

Mr Tan Gee Paw, chairman of the Lee Kuan Yew Water Prize Nominating Committee said, “His relentless pursuit of adaptable solutions to resolve the challenge of water reclamation has led to a highly sustainable technology that protects the quality of precious water resources and the environment, and delivers immense benefit to mankind.

“Bridging the gap between research and industrial application, his technology now forms the basis of all BNR processes in use today in both developed and developing countries.”

Dr Barnard is devoting a lot of work into refining the technology so that nutrients in water can be removed even more cheaply and with less energy. It is work that “can only get more interesting in the future”, he says.

“I treasure being awarded the Lee Kuan Yew Prize, as recognition for many years of studies and research, and also for the opportunity I had to meet in-person a man who has had such a profound impact on the world politics, and yet visualized the importance of water in the world’s future,” he says.